Now there’s a touch of spring in the air, it’s time to resume with my travels, starting with a trip into the Kingdom of Fife for three of the matches in the organised East of Scotland League Groundhop. That hint of springtime decided to make way for a return to winter conditions, with snow forecast for the weekend, so I decided to just fear the worst with any football being a bonus. As it turned out, apart from a few snow flurries and it being bitter cold, everything went nicely to plan.  I headed north on the 0738 train to Edinburgh, then caught the Scotrail service to Burntisland, arriving at 1015 for the first match of my Scottish treble. 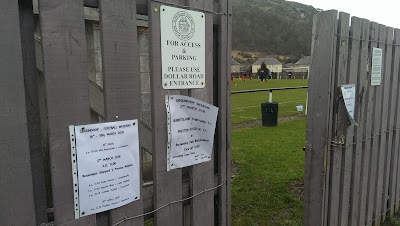 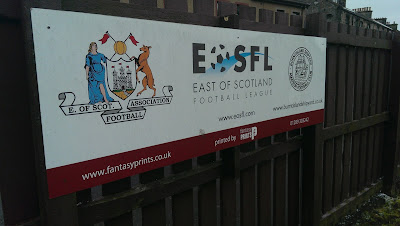 Burntisland is a royal burgh and parish on the northern shore of the Firth of Forth in Fife. (population over 6,000) The town is known for its award-winning sandy beach and the 15th-century Rossend Castle, plus the traditional summer fair and Highland games day.

Burntisland Shipyard Football Club formed from the Burntisland Shipbuilding Company's recreation fund. The workers weekly subscription had been established in 1919 for recreational activities, such as cricket, bowls and the formation of two football teams at junior and juvenile level. The football team played in local leagues until 1925 when the club was properly established, joining the Lothian Amateur Football League and playing in the Scottish Cup in 1929. The club joined the Kirkcaldy and District Amateur League in 1959, followed by the Kingdom Caledonian Football League, before joining the East of Scotland League in 2012. 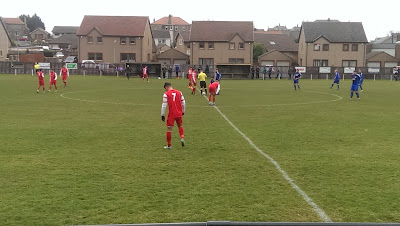 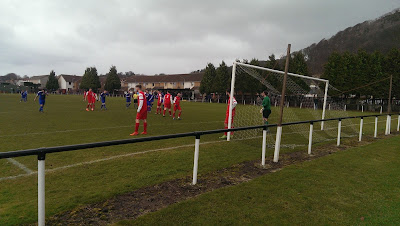 Recreation Park was bought by the shipyard, who built a pavilion to enable the playing of cricket and football. The ground has a covered enclosure centrally at one side with the team dugouts opposite. The changing rooms with refreshment bar and the club shop/toilets cabin are set back behind the goal. 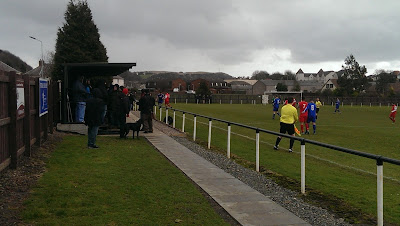 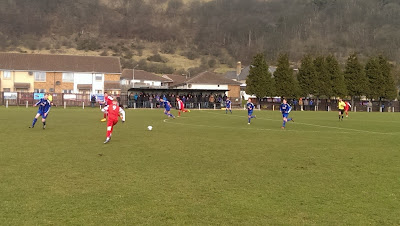 On my arrival at the ground I was promised loads of goals by the lad taking the admission money at the dugouts entrance. As the first half progressed his prediction looked way off the mark until Greg Binnie nipped in to fire Preston into the lead on 38 minutes. Shippey replied just before the break with a superb strike from Tom Graham, his banana shot from the edge of the box curling into the far corner of the ‘keeper’s left hand post.
The visitors got to grips with the strong wind which faced them in the second half, regaining the lead when Jonny Grotlin raced clear on the left flank, keeping his composure to draw the ‘keeper and finish with confidence.
Burntisland’s chances of getting back into game weren’t helped by the dismissal of Rab Kinnaird for stamping on the opposing full back on 76 minutes, but they should have at least grabbed a point. With just over five minutes remaining they were gifted a penalty, but Jon Galloway’s weak shot was gathered by Craig Pennycuick to give the three points to the Panners. 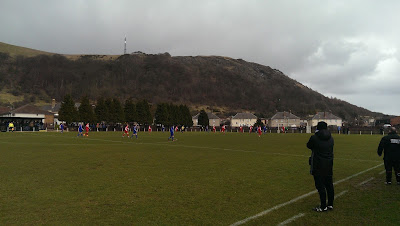 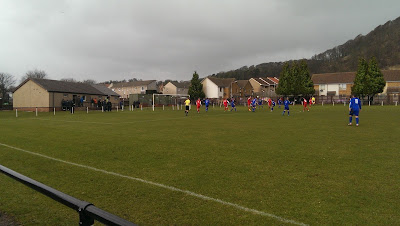 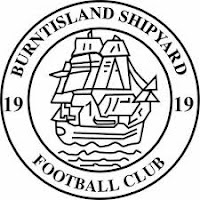 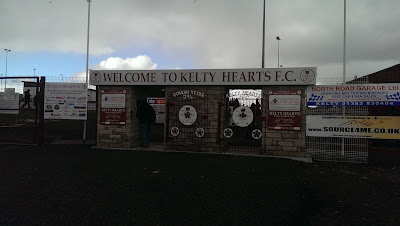 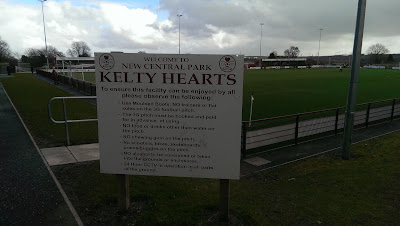 Kelty is a former coal mining village in Fife (population over 6,000) situated on the Fife/Kinross-shire border next to the M90 Edinburgh to Perth road.
Kelty Hearts Amateur Football Club formed in 1975 beginning life in the Kirkcaldy & District Amateur Football League. After major work on New Central Park the Jam Tarts were accepted into the Junior ranks, joining the Fife Junior League in 1980. (champions 1990–91, 1991–92, 1992–93, 1996–97, 1998–99, 2002–03) The club progressed up to the highest level of the East Juniors, winning the East Super League in 2014-15 and 2016-17. Last summer the club decided to make the switch to senior level with ambitions to reach the SPFL, by joining the East of Scotland League, step 6 of the Scottish pyramid. 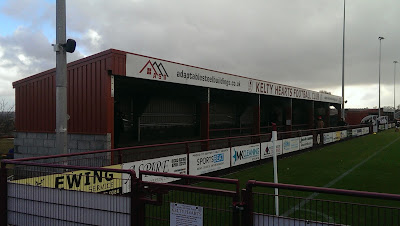 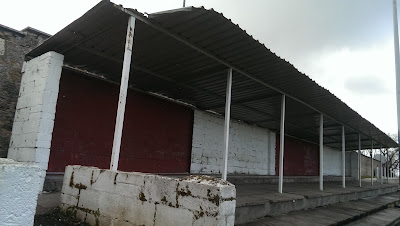 New Central Park has a capacity of 2,271, with two identical covered enclosures each side of the dugouts, each having room for around 500 spectators. There is also a 250 capacity enclosure on the school end with raised hard standing behind both goals.
The changing rooms, social club and other amenities are below the main spectator area, with the latest 3G Greenfields MX surface raised up from the entrance. The biggest attendance at the ground is 2,300 when Rangers provided the opposition for Stefan Winiarski’s testimonial in 2012. 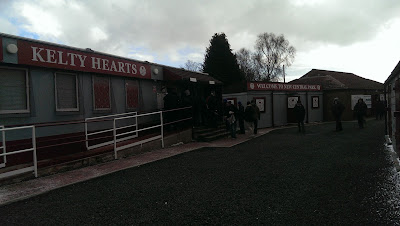 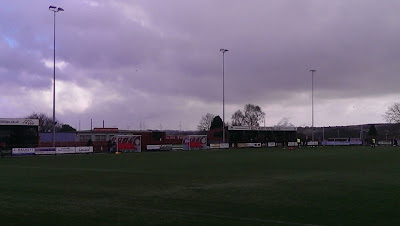 The club with the 100% winning record against the team with the 100% losing record could only mean one thing… I was going to beat my own personal record of a 12-0 victory today.
That didn’t look possible after half an hour gone, after a Scott Dalziel header had restored Kelty’s lead, having earlier gone ahead through Brian Ritchie, only for Tweedmouth to equalise when Lewis McKenna lobbed the ‘keeper, which came as more of a surprise to him and his teammates, than the watching spectators.
Just before half time a sliding volley by Neil McCabe, was followed by Errol Douglas netting in injury time to make it 4-1 at the break, with Hearts also having three goals(or was it four?, I lost count) goals chalked off, which would have set me well on my way to beating my record score.
Dalziel headed home the fifth with 52 minutes gone, followed by Stephan Husband making it a half dozen scoring the first of two direct free-kicks from outside the box. Substitute Stuart Cargill heading home with his first touch of the ball to make it super-seven with still half an hour left to play.
A goal lull meant we had to wait over a quarter of an hour for the next strike by Douglas on 76 minutes, with Shaun Greig cracking home a right foot drive and Douglas completing his hat trick to make it 11-1 on 85 minutes.


There was still time to equal or beat my highest tally, but The Hearts declared on eleven, which took their total to 132 league goals for the season. 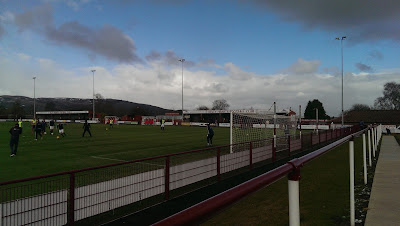 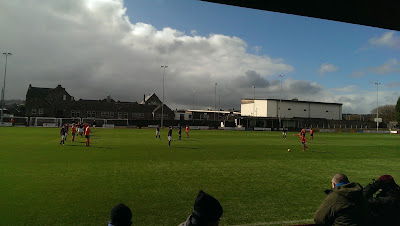 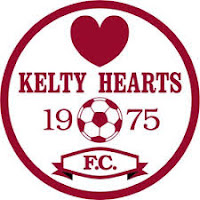 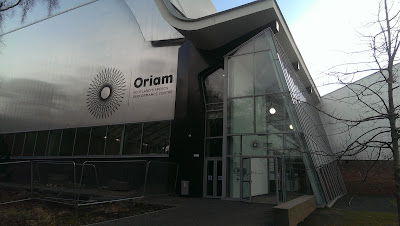 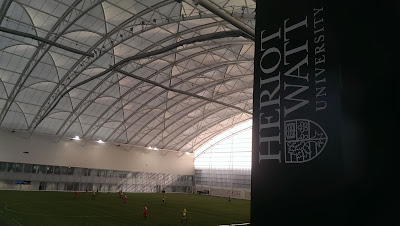 The Club was founded around 1945 as Heriot-Watt College F.C., before Heriot-Watt became a university and moved most of its enterprise to its new campus at Riccarton, in the west end of Edinburgh in 1971. The Club became Heriot-Watt University F.C. and successfully applied to join the East of Scotland Football League for the 1971–72 season.
The Watt play within the John Brydson Arena on the University campus, but for today's Groundhop game the match is on the indoor 3G synthetic pitch. The Sports Performance Centre, named Oriam opened to the public in August 2016 and has a full-size indoor football pitch(which looks huge) with seated viewing for 500 spectators down one side. The centre is a hive of activity with basketball matches also taking place (and something to watch at half time). 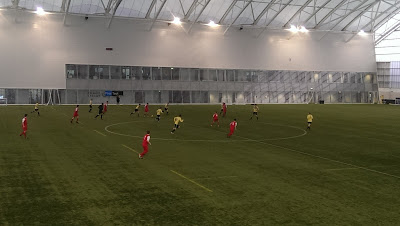 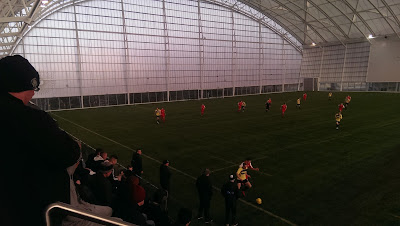 The visitors clawed back a two goal deficit to claim the points with a late goal by Callum Mein.  A brace from Michael Ward had put the Watt in a commanding position, firing in two similar stikes, getting on the end of a left wing cross in the 11th and 33rd minutes.
In the 40th minute a good run and cross down the right wing picked out John Robertson at the back post to half the deficit. Midway through the second half Leith were gifted an equaliser, when the Watt defender dilly-dallied on the ball for too long and was robbed by Daniel Garvey to capitalise on the error.


The hosts were reduced to ten men on 77 minutes after a late lunge from Anton Dows, then ten minutes later Mein curled in the winner from the edge of the box. In injury time Chris Lane was shown a second yellow card to rub salt into their wounds, when at one stage they looked to be coasting to victory. 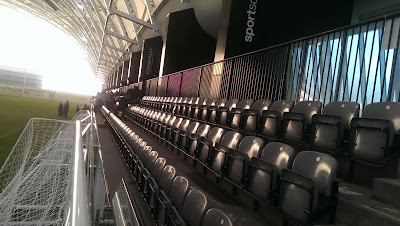 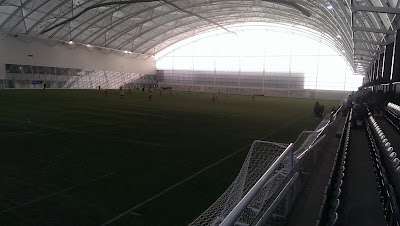 #HeedHopper
Special thanks to Katie for giving me a lift to Kelty and then onto Dundonald Bluebell, where we met Mark Wilkins for the second half of their game with Bonnyrigg. Katie & Lee were staying in Glenrothes, so Mark played a blinder to drive me down to Edinburgh in time for the last match of the afternoon at Oriam. Also a big thanks to the Groundhop UK team for organising a great hop, which was topped off by a few bevvies in The Booking Office before catching the delayed 2000 train back to Newcastle. 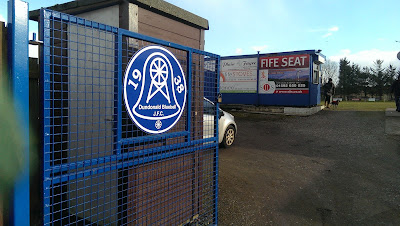 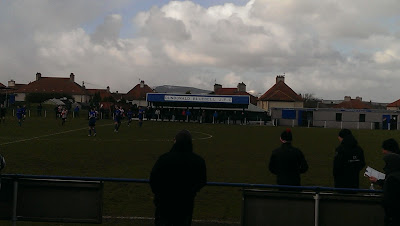 Michael Ward is my cousin. He'll love the shout-out! I'll have to ask him how his team bottled a two-goal advantage. Don't ask how I've stumbled across this blog from 2018...