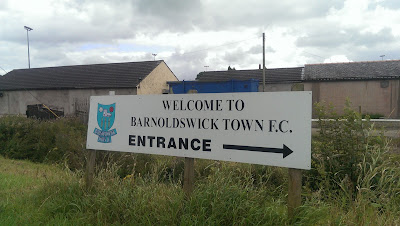 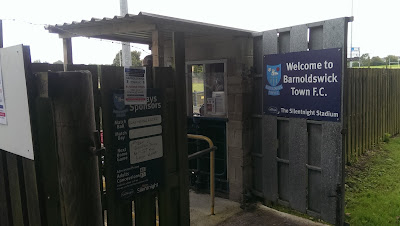 Barnoldswick and the surrounding areas of West Craven were part of the West Riding of Yorkshire between 876 and 1974. After the reorganisation of local government, the West Riding County Council and Barnoldswick Urban District Council were both abolished, becoming the Borough of Pendle and part of Lancashire. (I bet this went down a treat with the proud men of Yorkshire)
Locally known as “Barlick” it’s found on the lower slopes of Weets Hill in the Pennines, between the Ribble and Aire valleys, just outside the Yorkshire Dales National Park.
Barnoldswick  dates back to Anglo Saxon times, listed as’ Bernulfesuuic’ in the Domesday Book. (population around 11,000) 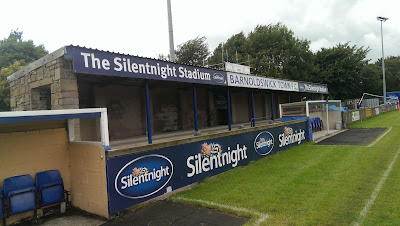 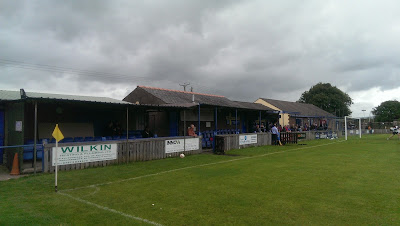 There was an original Barnoldswick Town, which played in the Lancashire Combination and Yorkshire League in the 1920’s and thirties, however the current club was established in 1972 as Barnoldswick United(1972).
They changed their name in 2003 by adding the “Town” suffix after a merger with Barnoldswick Park Rovers and Salterforth Juniors.
Played in Craven & District League and the East Lancashire League
West Lancashire League 1997-2009:
Division 2 runners-up 1997-98
Division 1 (2nd tier) Champions 1998-99
North West Counties League 2009-present:
Division One Runners Up 2009-10 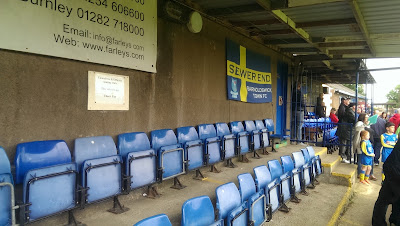 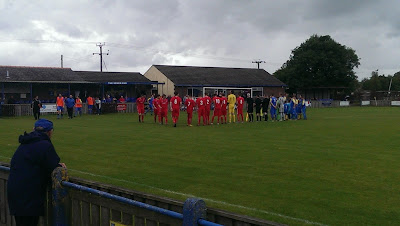 Silentnight Stadium
Victory Park
West Close Road
Barnoldswick
Lancashire
BB18 5LJ
Record Attendance: 554 v FC United of Manchester - July 2005
NWCL Grounds 11/45
There’s a covered brick enclosure at one side behind the team dugouts, with the club name embossed on the facade.  The seats are behind the goal, attached to the changing room block known as the “ Sewer End, with a diminutive stand in the corner next to the clubhouse. The cricket ground side and the far goal are both open standing. 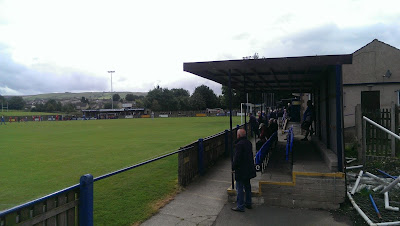 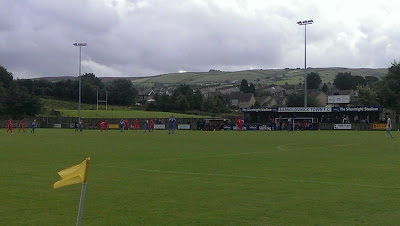 Barnoldswick Town v Dunston UTS
FA Cup Preliminary Round
KO 3pm
Att.193
Weather:Sunny
A late strike by Danny Boyle booked Barlick a place in the First Qualifying Round of the FA Cup. The hosts were the better side in the first half, with a Joel Melin effort hitting the post, before an onslaught on the Dunston defence saw Aaron Hollindrake fire home on 38 minutes.
A much improved performance from Dunston after the break, saw them gifted a goal in the 50th minute. A simple back pass to Connor King saw the Barnoldswick ‘keeper kick fresh air, which allowed Scott Heslop a simple tap in from close range.
I fancied there would be a decisive goal, as I couldn’t see the match going to a replay.  That winning strike arrived five minutes from time when a long through ball found Boyle who beat the advancing ‘keeper to the ball, before tucking into the unguarded net. The teams will play each other for the fourth time in the space of a year, when they meet again at the Silentnight Stadium next month in the FA Vase.
Matchday Stats
BTFC 2 (Hollindrake 38 Boyle 85)
DUTSFC 1 (Heslop 50)
Top Bloke - Joel Melia (Barnoldswick Town)
Entertainment 7/10
Spondoolicks
Admission £5
Programme £1
Pin badge £3
Mug of coffee 80p
Pastie £1.30
Mug of tea 80p 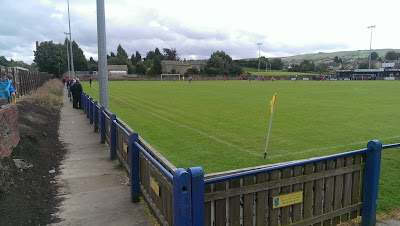 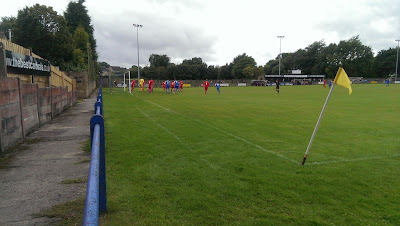 #HeedHopper
101 miles door-to-door
A1/A61/A59/A56
I don’t usually like driving too far after a Saturday morning shift at work, limited myself to a 2 hour journey. The trip to Barnoldswick was exactly 120 minutes door-to-door, so it was worth the effort to watch Dunston at a ground I hadn’t been to, with the added ingredient of an FA Cup tie. Although I was disappointed to see Dunston crash out of the cup at this early stage, full marks to Barlick, who were great hosts and I wish them well in the next round. Also much thanks to the lad on the turnstile who let me go back to my car to recharge my phone, otherwise this blog post would’ve had no corresponding pictures. (I was the postman) 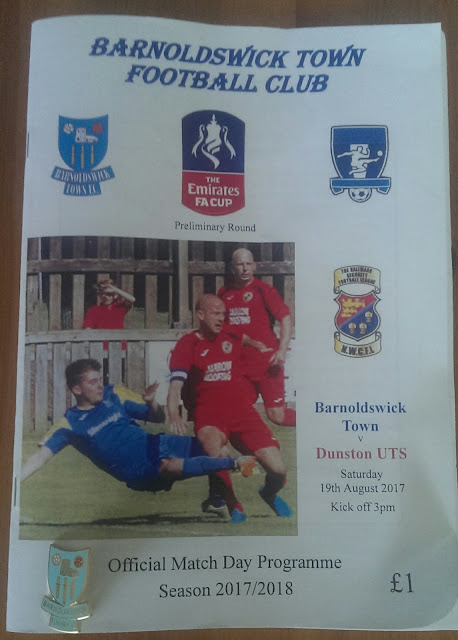