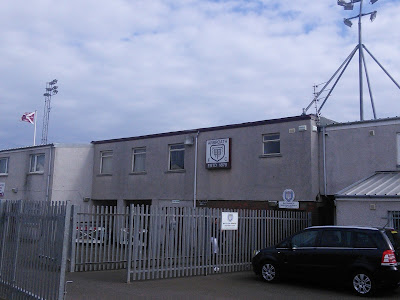 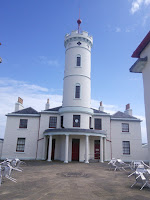 Arbroath is a former royal burgh and the largest town in Angus, on the North Sea coast of Scotland. (population almost 24,000)
As a town, it dates back to the High Middle Ages and the founding of Arbroath Abbey in 1178. The town growth came through the expansion of the flax and jute industries during the Industrial Revolution. The new harbour was built in 1839, so by the 20th century, Arbroath had become one of the country’s largest fishing ports.

The local delicacy and world famous “Arbroath smokies” was awarded Protected Geographical Indication in 2004, which limits their production to within 4 km of Arbroath. Smokies are made from haddock using traditional methods dating back to the late 19th century, where the fish are first salted overnight to preserve them, before being left tied in pairs to dry. The dried fish are then hung in a special barrel containing a hardwood fire and covered with a lid, then about an hour later are golden brown and ready to consume. 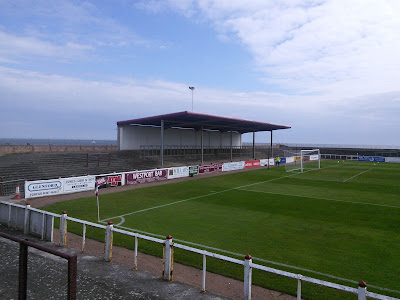 Arbroath Football Club were founded in 1878 and are nicknamed "The Red Lichties" in reference to the red light, which was used to guide fishing boats back from the North Sea into the harbour. 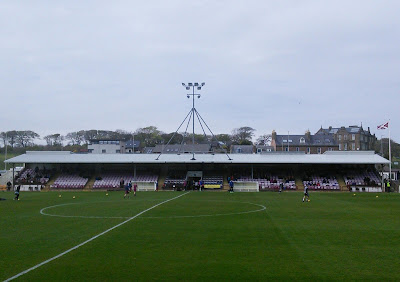 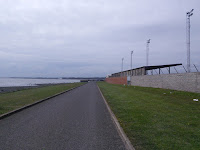 The club originally played at Woodville Park and Hospitalfield before moving to a former rubbish tip on the seafront. Gayfield Park was opened in 1880, with the first match against Rob Roy in the Scottish Cup. Its location to the west of the harbour next to the North Sea, which makes it the closest ground to the sea in Europe.
The ground is made up of three sides of terracing with covered enclosures at the Seaforth End (South End), the East Terrace and the Harbour End (North). The Gayfield Stand was opened in 2002 and has a single tier of 814 seats. The changing rooms and the 36nil bar are housed within the stand, with the dugouts at the front. 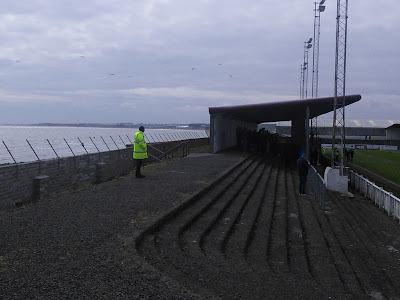 A Ryan McCord hat-trick shot Arbroath to the top of the table and the possibility of the Division 2 title. He gave his side a 38th minute lead with a direct free kick from the edge of the box, before Jamie Reid levelled just before the hour mark. The hosts regained the advantage five minutes later when McCord found himself free in the box(and suspiciously offside) to turn and fire home.
Their chances were heightened when two quick yellow cards saw Reid receive his marching orders, followed by a third for McCord tapping in at the far post after a great cross from David Gold. On 86 minutes substitute Jassem Sukar headed into his own net to set up a grandstand finish, but the hosts comfortably saw out the remaining time to claim a vital three points.
Arbroath head to Stirling Albion next week and will be crowned champions if they match Forfar’s result, who play Annan at home in the final round of fixtures in League 2. 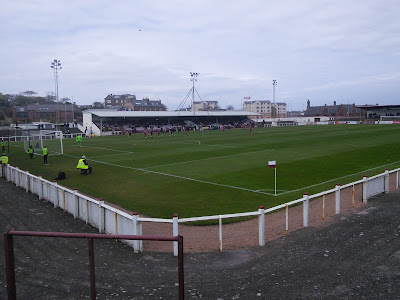 #HeedHopper
Newcastle - Edinburgh 0743 Virgin East Coast arr.0920
Edinburgh - Arbroath 1131 Scotrail arr.1256
Return on 1805 from Arbroath and the 2000 from Edinburgh back to Newcastle (Hooray! At long last...a later Saturday train service back home from Edinburgh)
Arbroath has been on my “t’do list” for years, but it’s always eluded me, as they always seemed to be playing away whenever I had a free Saturday. The new later train service means it's now much easier to achieve as a day trip, so I booked advance tickets for my first trip north of the border since I wrote the last chapter of my book back in October.
I had a few hours spare in Edinburgh which gave me plenty of time to visit the new JDW in the city, the very impressive Caley Picture House. I also visited the Arbroath branch before the match, then afterwards called for a pint on the harbour and scranned a smokie on my way back to the station.
An enjoyable day and even though it was a sunny April afternoon, it was still chilly enough for my face to be like beetroot and my hair to be sticking up like Oor Wullie’s from the strong wind coming off the North Sea.