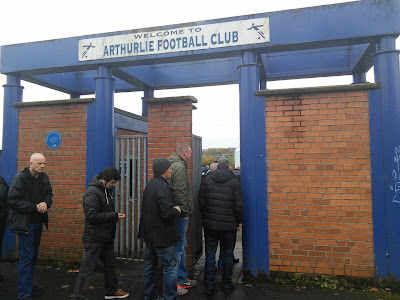 Barrhead is a town on the edge of the Gleniffer Braes, 8 miles south-west of the city of Glasgow. Barrhead formed when the neighbouring villages of Arthurlie, Grahamston and Gateside gradually merged to form one contiguous town. The name "Barrhead" first appeared in 1750, deriving from the agricultural term Barr meaning long ploughed furrows of crops, as the original homestead lay at the head of the barrs. 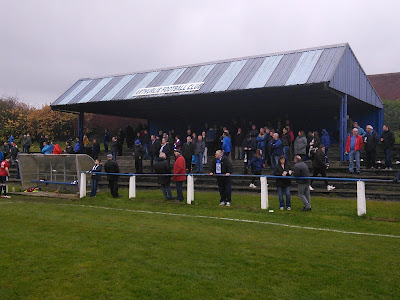 Arthurlie FC was founded in 1874, being one of five surviving teams that played in the Scottish Cup in their formative season, later becoming one of the founder members of the Scottish Federation League in 1892. The club played at senior level until 1929, within the Scottish Football League between 1901 and 1915, then after the First World War in the newly created Third Division in 1923. They joined the Junior ranks in 1931. 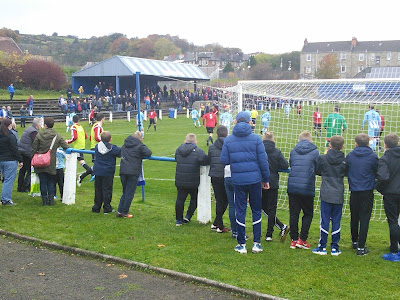 Arthurlie moved to the first Dunterlie Park from their Arthurlie Cross ground in 1882.They moved to the second Dunterlie Park in 1906, and the current one in 1919.
The entrance is at the top of the terrace behind the goal, with the terracing continuing to the west side of the ground where there’s an enclosure, decked out in club colours with the club name on the front of the roof. The rest of the ground is open with a dugout on each side, with the changing rooms and 1874 Club cabin behind the far goal. 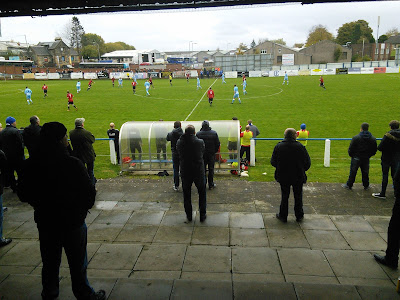 Kilwinning Rangers booked their place in the 3rd round with an impressive performance in Barrhead. They took the lead on 13 minutes when the home defence failed to deal with a corner kick. Gavin Hay made a good save from the initial header but Iain Cashmore was on hand to net the rebound from close range. The visitors could have extended their lead but the Lie got back into it just before half time, when a free kick from the right was met with a free header from Ryan McGregor.
Arthurlie hit the woodwork twice before the Buffs regained the advantage on 64 minutes with a superb strike from Ben Lewis, who latched onto a through ball and curled his shot high inside the ‘keeper’s left hand post. With just a few minutes left on the clock Kilwinning wrapped it up when Frye laid the ball into the path of Liam McGuiness for an easy finish before celebrating with the visiting supporters behind the goal.
A disappointing afternoon for Arthurlie was summed up in stoppage time when a late lunge from Jorden Leyden resulted in a straight red card, but overall it was an enjoyable game and a typical Scottish Junior cup tie. 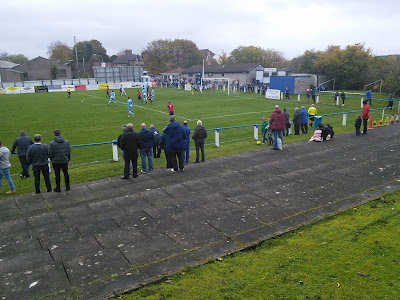 In the company of Darren 'Zippy’ Turnbull, Honest Paul and James Little.

0842 East Coast Virgin train to Edinburgh Haymarket arriving at 1031
1037 Scotrail to Glasgow Queen Street arriving at 1140.
1342 Scotrail from Central Station to Barrhead took just 10 minutes, catching the 1627 return.
1840 Virgin train to Carlisle arriving at 1950.
Ended up getting the 1938 Northern Rail to Newcastle, instead of the 2124. The service was half an hour late as the train had to be expanded due to a large following of Toon fans coming back from Preston, so we were back in Newcastle at 2150.

Unfortunately Jimmy Jimmy and Plymouth Pete couldn't make the trip for the double celebration of Zippy's birthday and the “From the Toon to the Scottish Joons Finale Party”
We met up with James at Haymarket station then on arrival on Glasgow we had a pub crawl, with a bevvy at the Camperdown Place, Counting House, The Auctioneer and The Royal Scot. Later on after the game we went to The Horseshoe Bar, Drum & Monkey and The Maltman. 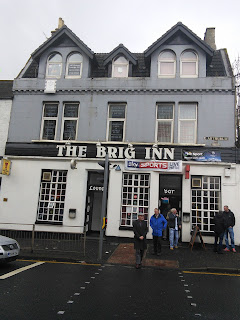 When we arrived in Barrhead we called into the Brig Inn, which made a refreshing change to some of the local pubs I've encountered on this quest. The pub was full of football memorabilia covering all clubs, with an equal array of photographs and programmes from Celtic and Rangers. The walls were also decorated with Scottish international programmes and other football clubs from both sides of the border, making it a Swiss type neutral drinking zone.
We were expecting to have an hour and a half in Carlisle but the aforementioned change to the train schedule meant we could get home quicker and have a few pints on home soil, instead of risking the western bar brawl kind of incident that happened on my last visit to the border town. 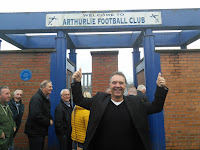 Our earlier than expected return to Tyneside rounded off a great day. My quest of visiting the 28 clubs that have won the Junior Cup in my lifetime has been completed on schedule. Now all I need to do is finish writing the book and get it published in the new year. Once that's done I’ll be ready for my new Groundhopping challenge, whatever that may be.