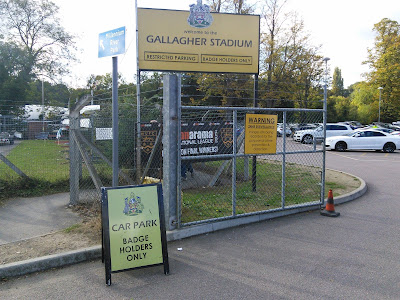 Maidstone is a borough and the county town of Kent, 32 miles south-east of London. (Population over 113,000)
The River Medway runs through the town centre, linking it with Rochester and the Thames Estuary. Historically, the river was a source and route for much of the town's trade as the centre of the agricultural county of Kent, known as the Garden of England. There is evidence of a settlement in the area dating back to before the Stone Age, with the first recorded instances of the town's name appeared in Saxon charters.
De maeides stana and maegdan stane, possibly meaning 'stone of the maiden' or 'stone of the people'. The name evolved through medestan/meddestane in the Domesday Book with possible variation Mayndenstan, in 1396, until the modern name first appeared in 1610. 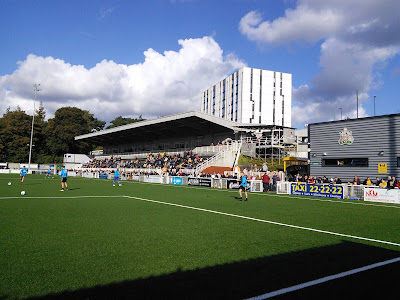 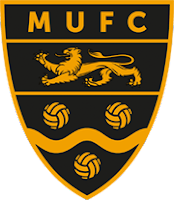 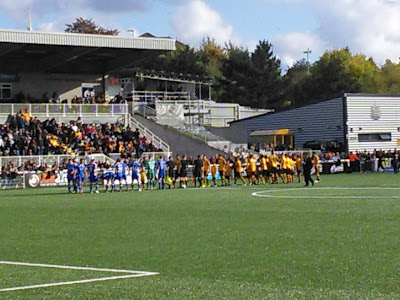 The Main Stand has 750 black seats with MUFC picked out in yellow. The stand has a small upper section of seats for the press, media and the two executive lounges. There is covered terracing behind each goal with the North Stand slightly larger. Behind the South terrace are refreshment outlets, with the Spitfire Lounge in the south-east corner beside the turnstile entrance. On the west side there is open area behind the team dugouts and the stadium has a 3G playing surface, a rarity at this level. 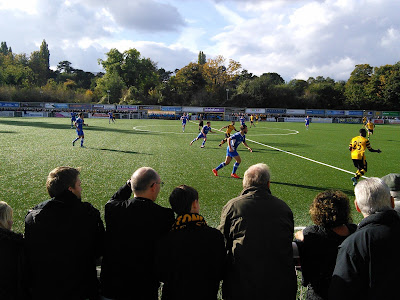 A double strike by Danny Johnson assured the Heed came away from Kent with a well deserved three points. The striker almost gave Gateshead the lead when he got on the end of a George Smith cross only to see his effort come back out off the post, but he made no mistake just before half time, latching onto a Manny Smith flicked header to steer the ball home from six yards.
That decisive goal before the break gave the Tynesiders a massive boost, taking full charge of the second half and finally wrapping up the points on 70 minutes. A strong penetration run through midfield from Sam Jones saw him lay the ball into the path of Johnson, who quickly turned and fired into the bottom left hand corner.
The match saw The Tynesiders field two Smith’s and two Jones’ in their starting line up, alas the Heed couldn’t convert more goalbound efforts in what manager Neil Aspin described as our best performance of the season. 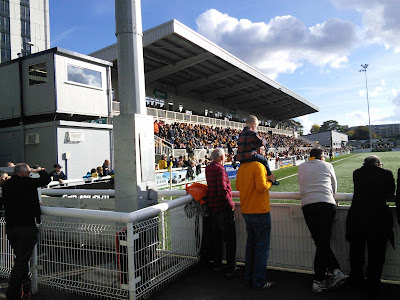 Due to the mackems taking up all the cheap train seats for their latest defeat at West Ham, I had to go for the cheaper option to get to London. Although the Megabus was pretty busy for that time of the night and the seats weren't very comfortable, I can't really complain considering the fare was only £1 plus a 50p booking fee.
The early arrival meant I could spend the morning ticking off some 'Spoons pubs. I started off at the two in Victoria before heading west on the tube to cross off another five in Hammersmith, Putney and Fulham. The morning went exactly as I planned so I arrived around lunchtime to do the two in Maidstone, which took my overall 'Spoons total to 300.
There was still a few hours before kick off to venture into a couple of Good Beer Guide pubs, especially liking Ye Olde Thirsty Pig where I got talking to a South African guy who had lived in Maidstone for ten years. He was keen to find out where I was from because he had never heard an accent like mine before, so basically I was the first Geordie he had ever met. Along the pub route I met up with the usual gang of four led by 100FgC squad members John Robinson and Keith Arthur.

Final thought
Maidstone United have a tremendous set up at Gallagher Stadium. For a club who have spent so much time with a nomadic existence, they fully deserve this terrific home in the heart of the town. The club have got it right both on and off the pitch and a more successful Football League return may not be too far away into the future.