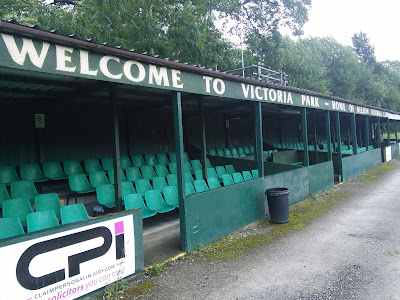 Nelson is a town and civil parish in the Borough of Pendle in Lancashire, 4 miles north of Burnley on the Leeds and Liverpool Canal.(Population just under 30,000)
Following the opening of the East Lancashire Railway in 1849, the railway company built a station for the community in between Burnley and Colne. When it came to naming it they couldn’t use the nearby village of Marsden, as there was already a station by that name in Yorkshire. The railway then decided to name it after the Nelson Inn, a coaching stop dating from the early 19th century, named after the famous naval hero. Nelson is probably the only town in England that originates from a public house, growing and developing as a mill town during the Industrial Revolution.

Birthplace of ex Man Utd and Norwich midfielder Mike Phelan and actor John Simm( Life on Mars, The Village, Sex Traffic, State of Play) An actor who I’ve got a lot of time and respect for because he picks his TV & film roles carefully and doesn’t appear in any old shite!
Also the birth town of work colleague, fellow Red Dwarf fan and my own personal car mechanic Davy Leverett. We have served Her Majesty's postal service over a combination of 60 years and have worked together in the same Delivery Office for over a quarter of a century. 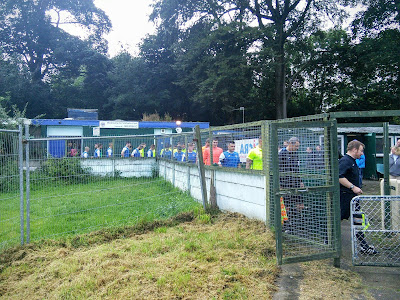 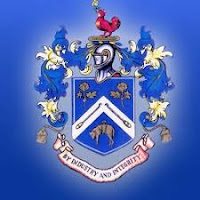 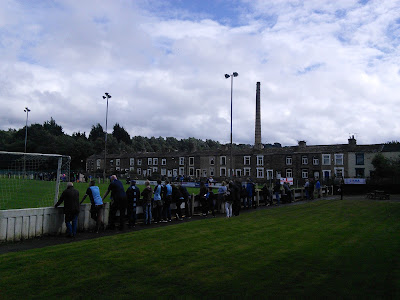 Nelson originally played on a pitch behind the Golden Ball pub moving to the Park Ground by the 1890s They moved to Seedhill around 1905, which was enhanced when they joined the Football League with a large 2,000 capacity wooden stand built in 1922. The club's highest attendance at the stadium was 14,143 for a Third Division North match at home Bradford Park Avenue on 10 April 1926. Nelson played their final home game at Seedhill on Sunday 28tj March 1971 when a four figure gate witnessed the first Sunday fixture at the stadium, beating local rivals Clitheroe 5–3.

Along one side there is a shallow wooden stand with four rows of green seating in the centre section, with standing room at the sides. The dugouts are on the opposite side, with the changing rooms in the far corner, next to the clubhouse. New floodlights have been added and the dugouts replaced to meet ground grading on 2013. 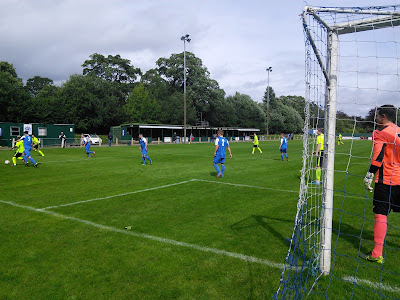 Bishops came back from an early setback to book their place in the FA Cup 1st qualifying round. Only 69 seconds had ticked by when a right wing corner was headed home by Richard Cowan to give the Admirals a dream start.
Just before the break the visitors finally drew level when good work by Hoganson teed up Andrew Johnson to slot the ball home, before they took full control in the second half. Michael Hoganson floating in a 20 yard free kick on 49 minutes, followed by Jeff Smith volleying home from a left flank corner soon after. Andre Bennett capitalised on some sloppy defending to wrap the game up and set up a home tie with Evostick North side Ossett Albion. 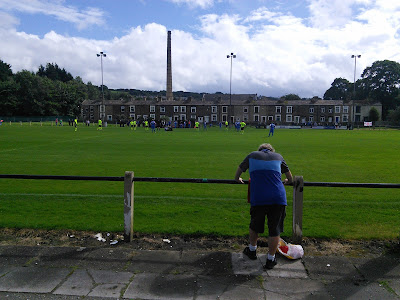 Straight there and back today. After work I drove down to Katie’s house to meet her and Lee, swapping cars so I could catch up on my sleep. At the ground it was good to finally meet longtime Facebook friends Mark and Ryan Watterson, who had travelled up from Sheffield.
A really enjoyable day, loved the quaint ground and a good game of cup football. Not only that but my football bet kopped and the Toon even won an away match, so as far as Soccer Saturday's are concerned, what's not to like!  (Ryan's blog)

Edit I wrote this in the car on the way home. Just I finished there was a rattling noise and a burning smell coming from Katie’s car. After investigation we couldn’t find what the problem was, so gambled on taking a steady drive up the A1 for the last 70 miles home. Thankfully we got back without breaking down but poor Blossom will have to go to the car doctor tomorrow.