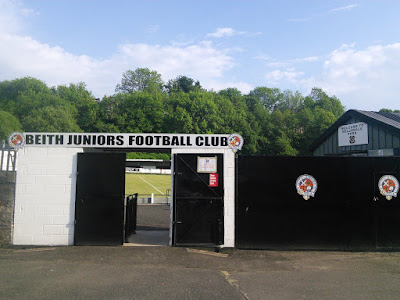 Beith is a small town situated in the east side of the Garnock Valley in North Ayrshire, approximately 20 miles south-west of Glasgow.  (Population just under 7,000)

The town name originates from Old Irish for birch tree, as the district was originally covered with woods and known as 'Hill of Beith'
Beith has historical links to smuggling especially during the the 18th century, gaining a reputation for harbouring bad ‘uns, due to its location between the coast and Paisley and Glasgow. The Smugglers Tavern on Main Street pays homage to the days when Beith was an expedient stopping point for villains. 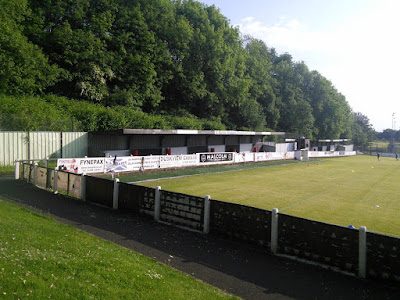 Beith Juniors formed in 1938 and play in the classic and best kit there is - black and white striped shirts.
The Cabes are the new holders of the Scottish Junior Cup, winning the trophy for the first time after a penalty shoot out victory over Pollok on the 29th May. 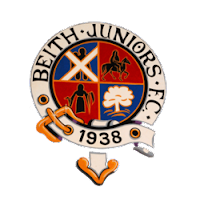 The Mighty have won the Ayrshire Cup on 9 occasion plus plenty of other district and county cup honours.
Bellsdale Park
Meadowside Terrace,
Beith,
KA15 2AF

The original Beith senior side moved to Bellsdale Park in 1920, with the Junior club taking over the ground after their formation. The ground has two standing enclosures on the far side, decked out in black and white which the novelty of 3G grass on the terraces. There is another standing enclosure on the main side, with the dressing rooms in the bottom corner and the turnstile entrance at the top of the slope. The boardroom bar and snack bar are next to the entrance with open areas behind both goals, with a scattering of bench seats throughout. 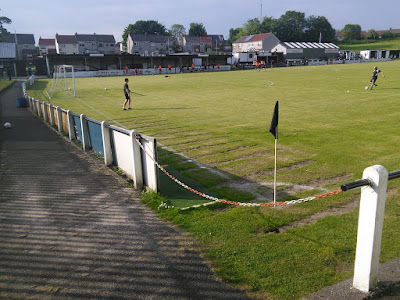 Pollok showed their class by providing a guard of honour to the triumphant Junior Cup winners as they entered the pitch. The match was a typical end of season affair, with both teams prioritising  forthcoming cup semi-finals this week.

1-0 Thomas Collins [35’]
Good work by Beith ‘keeper Scott Walker to set McGowan on his way down the left wing. He provided an inch perfect cross for Collins to the fire in from six yards
1-1 Del Hepburn [49]
Left wing cross was met by a cheeky back heel from Hepburn from close range.
Entertainment 6/10
Top Bloke - David McGowan [Beith Juniors] 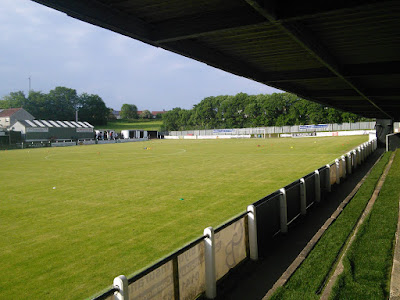 Seeing Beith win the Junior Cup just over a week ago at Rugby Park, meant another club added onto the t’do list in my book quest of winners of this famous old trophy. I was determined to get this ticked off quickly, especially with the Junior Cup being on show at the ground for their last few remaining games. I didn’t fancy the long drive to North Ayrshire, but a glorious hot summer day made the decision for me, so I set off at 3.30pm. The trip ran smoothly, even negotiating the rush hour traffic along the M8 without any problems, to safely arrive at Bellsdale Park in exactly 3 hours from door-to-door. 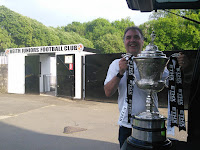 On arrival my priority was to seek out the trophy and get my photo taking alongside the holy grail of Scottish football. I asked in the boardroom bar where it was, only to be told it wasn’t on show for tonight’s game as they were playing Pollok, so they didn’t want to appear to be rubbing their noses in it. As you can imagine my heart sank with this news, but I fully understood their decision and admired the respect shown to their opponents. When I told the lad behind the bar what I was doing and how far I’d travelled he quickly had a word with someone from the club, who took me to see a guy called John, who as luck would have it, had the trophy in the boot of his car. He passed his keys onto Jim, who took me out to the car, taking the trophy and plinth out of their boxes and taking some photos with me proudly having the trophy in my mits.
Special thanks to everyone involved in this, I know to them it might have seemed a cheeky request, but it was very much appreciated and yet another reason why 'From the Toon to the Scottish Joons’ has became a pleasure to write.
Footnote
The book will feature a more thorough look into the town of Beith, the football club and their Junior Cup triumph. 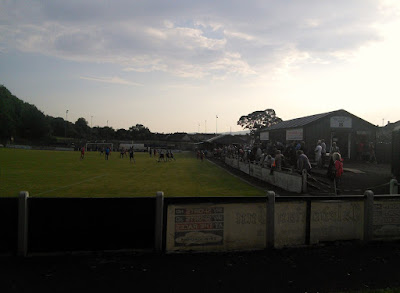 Excellent report. Nice to see someone who is a admires clubs at all levels. Our chicken and haggis pies are outstanding.