For the fourth year running I visited the city of Nottingham for the Notts Senior Football League Bonanza, which is in its final year after being hosted by 20 different clubs. The Groundhop is organised by Rob Hornby who has been running these events for the last 14 years, but sadly this is his “Farewell Hop” after deciding to call it a day.

I left Newcastle on Friday morning on the 0935 Cross Country Service to Southampton, catching my connection to Nottingham from Sheffield. I was relieved to arrive at around 12.30 in one piece after some bloody jokers put a mattress on the train line between Alfreton and Nottingham, which caused a delay and damage to the train.
After a quick bite from Greggs, football bets put on and a few record shops visited on Mansfield Road, I started a Wetherspoons pub tour of the outskirts of Nottingham. I met up with Mark Wilkins and we managed to tick off 6 pubs before the first match of the groundhop in the village of Attenborough. 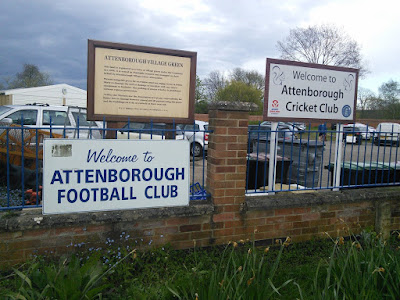 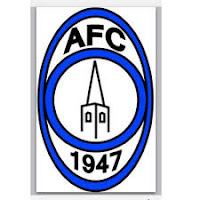 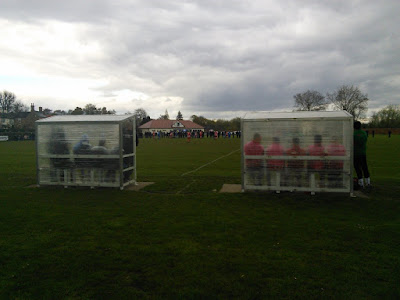 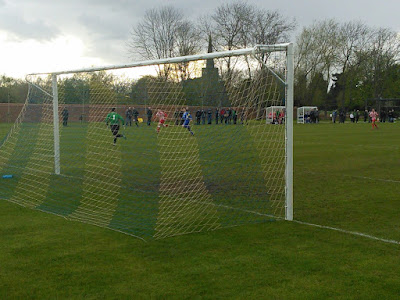 Attenborough is situated in the Broxtowe borough of Nottinghamshire, with The Strand hosting the traditional Friday night fixture with a decent 200 plus crowd in attendance. The football weekend got off to a great start with the home side racing into an early three goal lead, courtesy of a brace from Jack Warner (There’s only 3 Jack Warner’s!) before Jack Wilkinson headed in from a corner kick on 17 minutes. Awsworth responded after the restart with Danny Welsh firing in with just 10 seconds on the clock, but ‘Boro soon took a stranglehold on the match with Warner capitalising on a defensive mishap to complete his hat-trick, before teeing up Jordan Smith took make it five on 72 minutes. 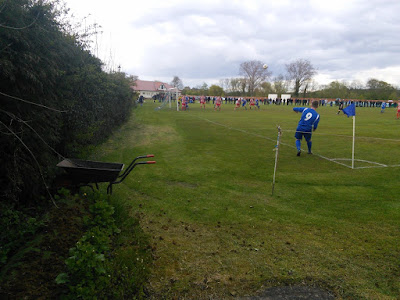 After the game me and Mark were joined by Steve Mann(Squad no.111) for another 3 ‘Spoons, the last of which -  The Gooseberry Bush, being where I started off my pub crawl earlier in the day. After Mark headed off home I took Steve to a couple of more pubs, ending up in Ye Olde Trip To Jerusalem, until we were shown the door at quarter past midnight. A cracking start to the weekend with 6 goals in the opening match and 8 new pubs visited.

After a late one I didn’t feel three bad in the morning, having time for a nice bath before checking out of the hotel. I met up with the rest of the ‘hopper on Queens Road to catch the coach for the short trip to Beeston for the first of four matches. 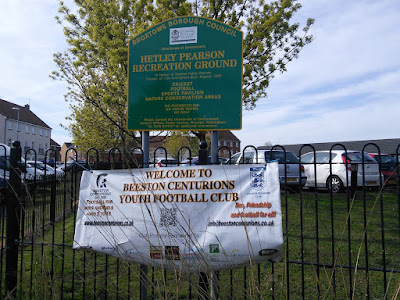 Beeston FC formed at the beginning of the season with the amalgamation of AFC Beeston and Boots Athletic, plus the Beeston Centurions youth club. This was hopefully the club’s last game at the Hetley Pearson Rec before they take up a 99 year lease on the old Siemens FC ground on Trent Vale Road. There’s plans for a new clubhouse and a 3G pitch on the site and all going well they should kick off next season at their new ground 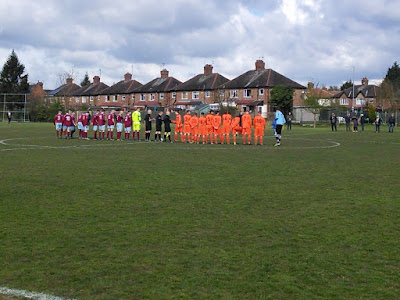 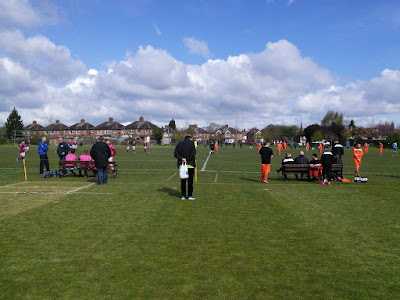 The last 0-0 draw I witnessed was exactly one year and one week ago, with the corresponding morning fixture on the Notts 'Hop at Bingham finishing goalless. I knew the writing was on the wall after about half an hour into this game that my fine run was coming to an end, as there was a distinct lack of a killer instinct in front of goal. Beeston hit the bar just before half time and twice in the second half fired chances wide from just 6 yards out, when it was easier to score than miss. Villa had a goal disallowed for offside ten minutes from time, which was the only glimpse of the ball hitting the back of the net over the full ninety minutes. 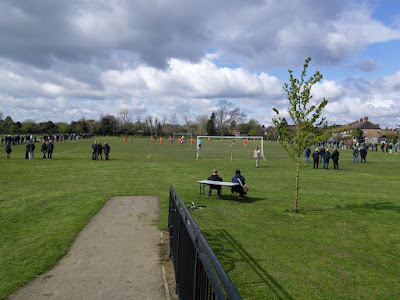 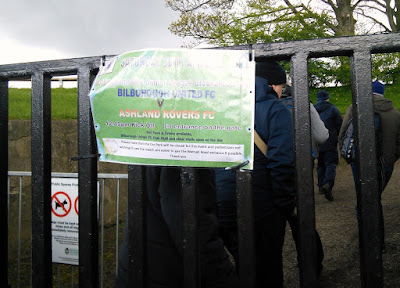 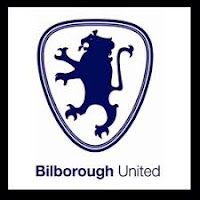 The second game of the day was in the village of Nuthall, home to Bilborough United. The club formed in 2009, playing at Bilborough College in the Notts Amateur Alliance League. In 2014 they were finally accepted into the NSL and at the same time moved to Basil Russell Park. The land was purchased by the council and opened in 1956, named after Councillor Basil Russell who managed the regeneration of the land. The football pitch was once used by Nuthall in the mid-nineties, but is now home to Bilborough, who currently run two senior sides and are expanding their junior set up next season. 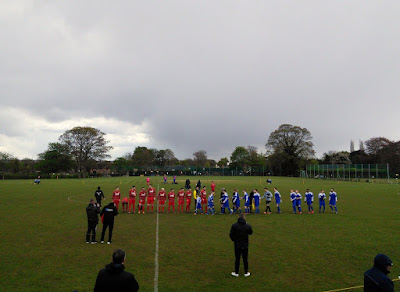 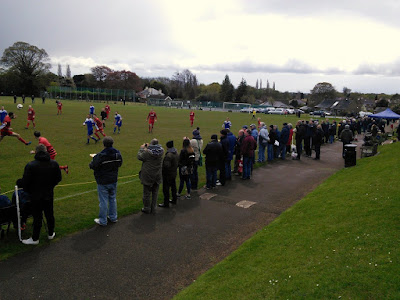 After being starved of goal earlier this morning it was good to see Rob England fire the home side into the lead after just seven minutes. His lob seemed to have been comfortably dealt with by the ‘keeper, but as he pushed his shot over the bar, his save was too weak and the ball dropped into the net instead of over the crossbar. I was expecting a flood of goals, but again this ‘hop was mirroring last years event, with 6 goals on Friday night, a nowts-each, then a narrow 1-0 victory to the home team. 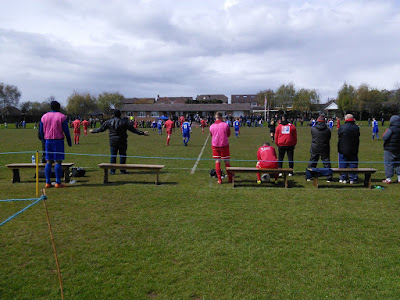 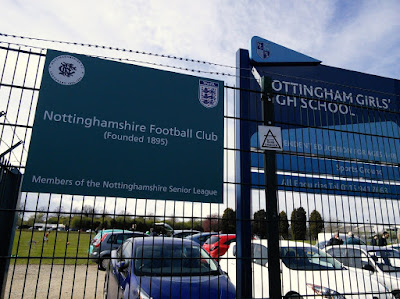 Nottinghamshire FC was founded in 1895 as Notts Magdala, changing to their current name in 1908. Founder members of the Midland Amateur Alliance League in 1904, winning their first of eleven league titles in 1908-09 and last of which came in 1982-83.
Notts Alliance 2003-2009 Second Division champions in their debut season.
Notts Senior League from 2009 - present. 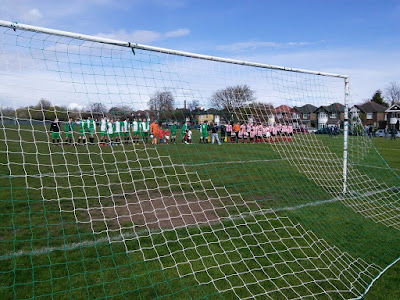 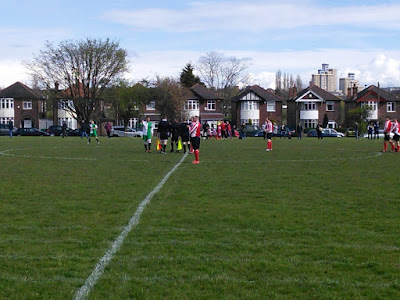 The Grassington Road ground is found just around the corner from the David Lloyd centre in Aspley. There isn’t much facility wise at the ground, the club use container cabin as changing rooms at the entrance and a pitch at the far end within Nottingham Girls High School. For this special occasion the club proved refreshments and souvenir stalls, and also issued their first ever programme and pin badge.

The best attendance of the weekend, edging just over the 300 mark saw a relatively comfortable win for visitors Gedling Southbank. Halfway through the first half Oliver Seagrave fired in a daisy-cutter shot from the edge of the box, then after the break he produced two good finishes to complete his hat-trick. My attention during the game was drawn to my radio and the goings on at the foot of the Premier League, so I was much relieved to get the positive result I desperately wanted, so went off to the final game in cheerful mood. 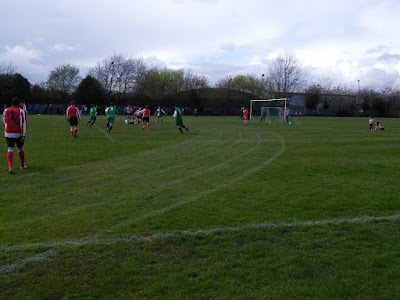 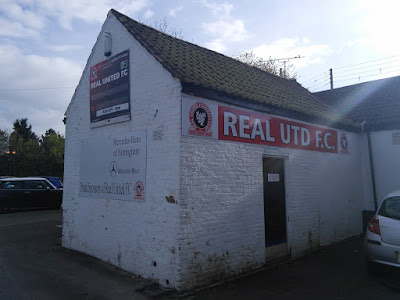 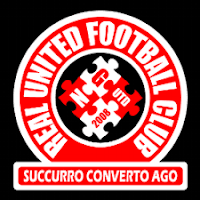 Real United formed in 2008, set up by Roger Henry as a community based club, for the purpose of helping young people to use football as a focus away from criminal activity and drug use. The club also helps to increase personal management skills, to help youngsters with education, work and training.
Notts Amateur Alliance 2008-2011 champions in Division 3(2008-09) and Division 1(2009-10)
Central Midland League South Division 2011-2015
Joined Notts Senior League at the start of this season 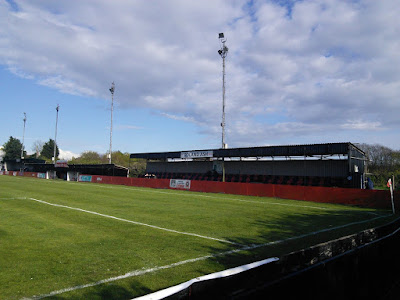 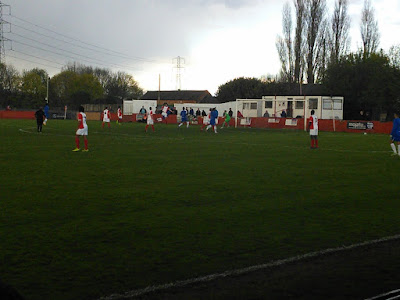 For our final game of the weekend we arrived at a proper ground with seats, which was great news for me, as my back was knacking after spending all day standing around. The Inspire Stadium has two seated stands, sandwiched by a standing enclosure behind the team dugouts. The rest of the ground is open with hard standing, with changing rooms, cafe and refreshment bar behind one goal. The ground is based in Stoke Bardolph and was re-opened in 2012, due to the hard work of the club staff and Gedling Borough Council, making it a smart looking stadium, decked out in the club colours with plenty of reference to the home team.

This was the most competitive match of the groundhop with plenty of full blown tackles and blood spilled over the ninety minutes. After a goalless first half it was Unity who took the lead just two minutes from the restart, when the ball fell kindly to Kye Hall to roll the ball past the ‘keeper from the edge of the box. A few minutes later United were awarded a direct free kick a good 30 plus yards out, which to everyone’s surprise was blasted straight over the ‘keepers head and into the net by Jimmy Spears, for undoubtedly the goal of the weekend. Both sides had chances to clinch the three points as the game reached the closing stages, but overall the draw was probably a fair result. 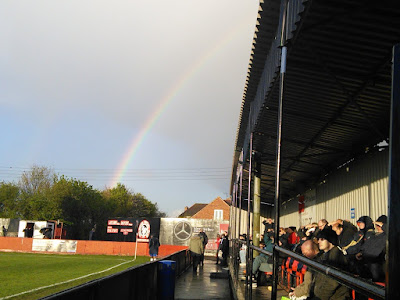 I travelled back home by car with Katie & Lee, so I didn’t get the chance to say “s’lang” to Rob after the game, so I’ll take this opportunity to thank him for another well organised ‘hop, which I thoroughly enjoyed, just like the others he’s organised over the previous years. I hope he enjoys his extra leisure time and I’ll hopefully see him again on my travels at a football ground somewhere and sometime soon. Cheers Rob!