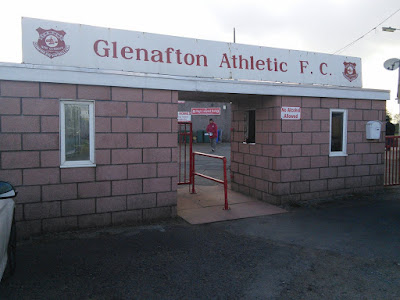 Glenafton Athletic play in the parish and former mining town of  New Cumnock in East Ayrshire. Its growth came during the 20th century, with several pits and miners rows expanding this small town into a mining community.(Population just under 3,000)

In 1950, thirteen people were killed and 129 miners were trapped at the Knockshinnoch Castle Colliery. a film was made about the disaster called The Brave Don't Cry in 1952, starring John Gregson, and there’s now a memorial at the site of the disaster.
New Cumnock has an interesting history, with links to William Wallace, Robert the Bruce and Robbie Burns. (which I’ll be covering in my book) Scotland’s national bard was a frequent visitor and he immortalised the Afton Water which flows into the River Nith with his 1791 poem ‘Sweet Afton’ 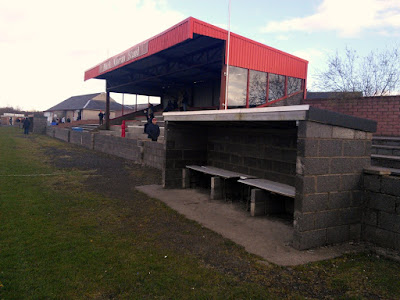 Glenafton Athletic formed in 1930 and take their name from the Glen Afton in the parish. 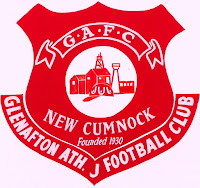 The Glens played in 3 consecutive Scottish Junior Cup finals between 1992 and 1994, their only success being a 1-0 win over Tayport in 1993. Each side of that they lost out to Auchinleck Talbot and Largs Thistle. The Glens first final came in 1963 when they were beat by Irving Meadow at Hampden Park, and their most recent final appearance was just two years ago, losing to Hurlford United in the Ayrshire derby.
Honours include -
8 times Ayrshire League champions
West of Scotland Super League First Division winners: 2011–12
Ayrshire League Cup winners 6 times and Ayrshire Cup winners on 5 occasions 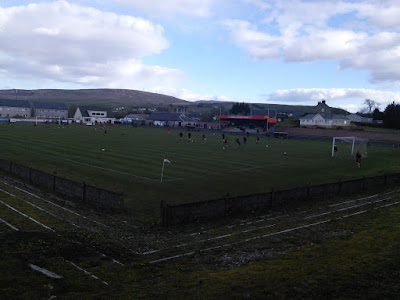 
After 30 years playing on the colliery pitch at Connel Park, Glenafton Athletic moved to Loch Park in 1960, and at the same time changed the club colours from black and white to red. The ground has a 250 capacity covered stand on one side, filled with bench seats and named in honour of Mick Morran, the club’s late physio. At each side of the stand there is plenty of terracing, with the rest of the ground open with sleeper terracing and grass banking, including the strange site of the TV gantry being used as some kind of dog pen. There’s a clubhouse bar in the Hugh Campbell Hall, named after the former club president, next to the snack bar on one side. The changing rooms are behind the goal in the Hunter Pavilion, which has a trophy room and hospitality upstairs. The club have revealed plans for a new changing facility and an all weather playing surface. 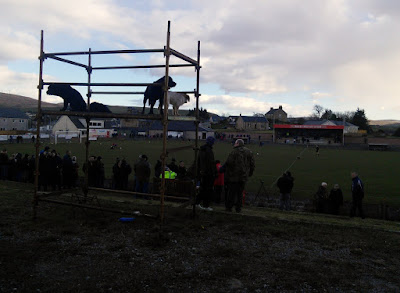 0-1 Graham Wilson (29’)
A left wing cross found Wilson at the far post, sliding the ball past the ‘keeper from close range.
0-2 Dwayne Hyslop (56')
A precise direct free-kick from 20 yards, left of the penalty area was fired into the top right corner of the net by Hyslop.

This victory saw the Bot leapfrog Troon at to the top of the division, and with still 4 games in hand over their nearest rivals, they look well on course to win a fifth Super League Premier title. 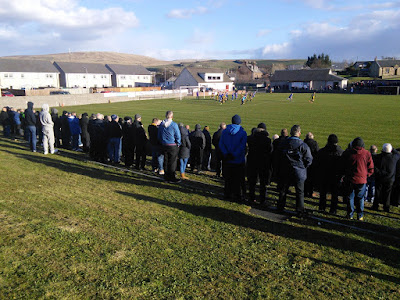 I took advantage of a week’s leave from work and an early evening kick-off to tick another off my “T’ do” list in the Scottish Juniors. The trip to New Cumnock takes around 3 hours, but it’s just as quick and a helluva lot cheaper by road than rail. Lee and Katie were available to accompany me on my latest trip north, so they headed up to 100FgC HQ for a 2pm departure. We stopped off at The Robert the Bruce in Dumfries for some bait, before driving along the A76 zig-zag into Ayrshire.
We kept up our recent record of seeing someone we know, wherever we go, with the appearance of Mark Wilkins (100FgC AF33 ) who had travelled up from London, but using Carlisle as his groundhopping base for the next few days.
On our way to New Cumnock there was an accident on the A75, which could have caused us a serious delay if it wasn’t for a nearby escape route, but the return journey thankfully went smoothly, so I was back at HQ at 11.20pm. 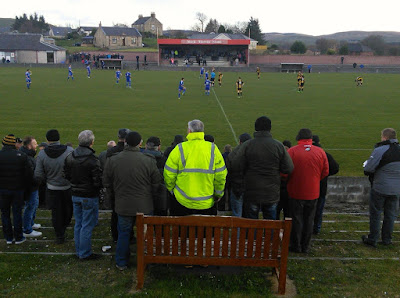 Footnote
I’m in the process of writing and hopefully getting a book published on the winners of the Scottish Junior Cup over the last 50 years, which will feature a thorough chapter on the history of Glenafton Athletic and the town of New Cumnock.