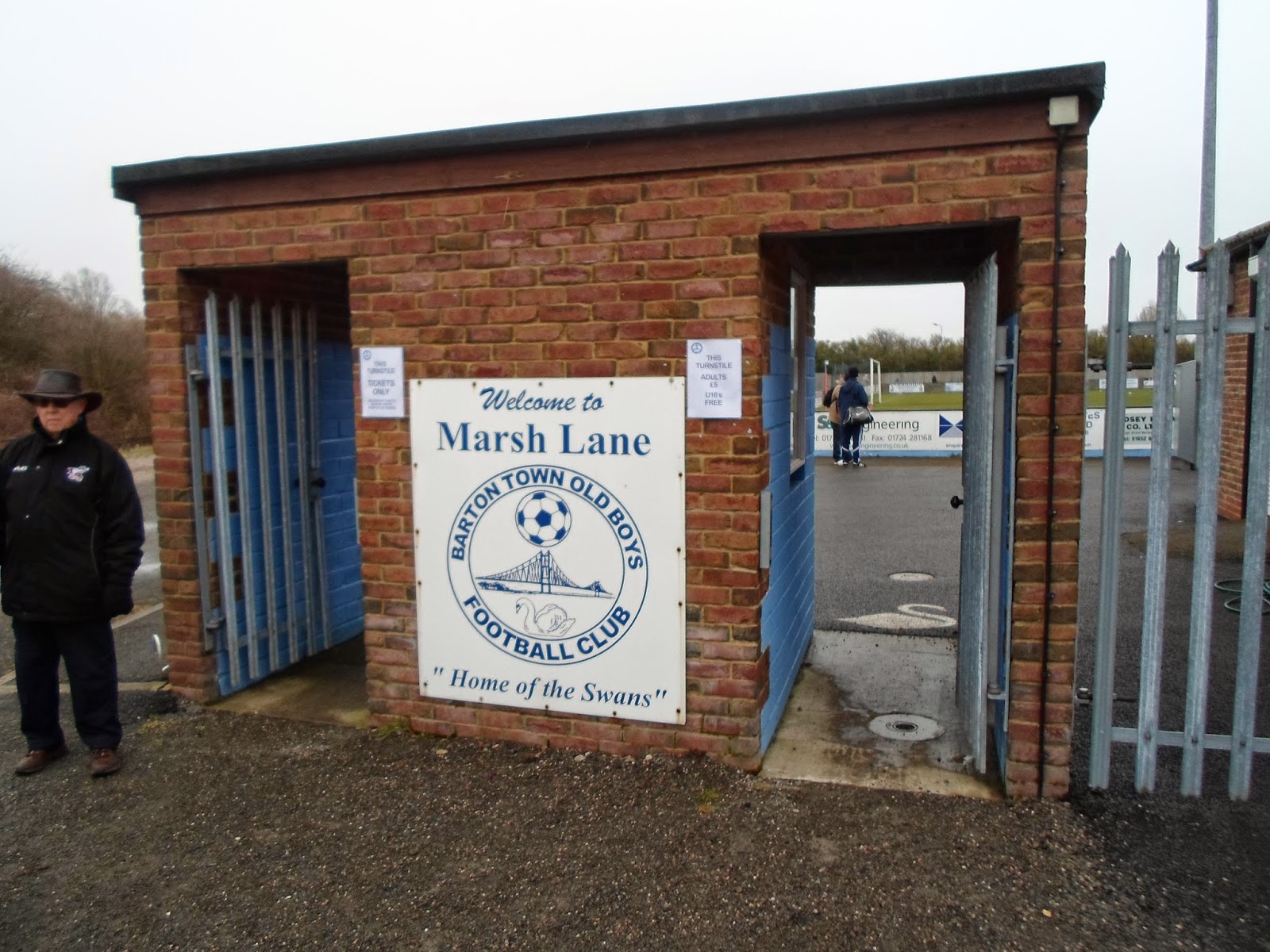 I was the designated driver for this latest Groundhop, departing at 8am to pick up Lee Stewart, before navigating through the damp weather along the A1 and M62 on route to Humberside. Our first destination was Barton-upon-Humber, which is a town and civil parish in North Lincolnshire. This meant crossing the Humber Bridge as the town is found on the south bank of the Humber Estuary,  six miles south-west of the city of Hull. 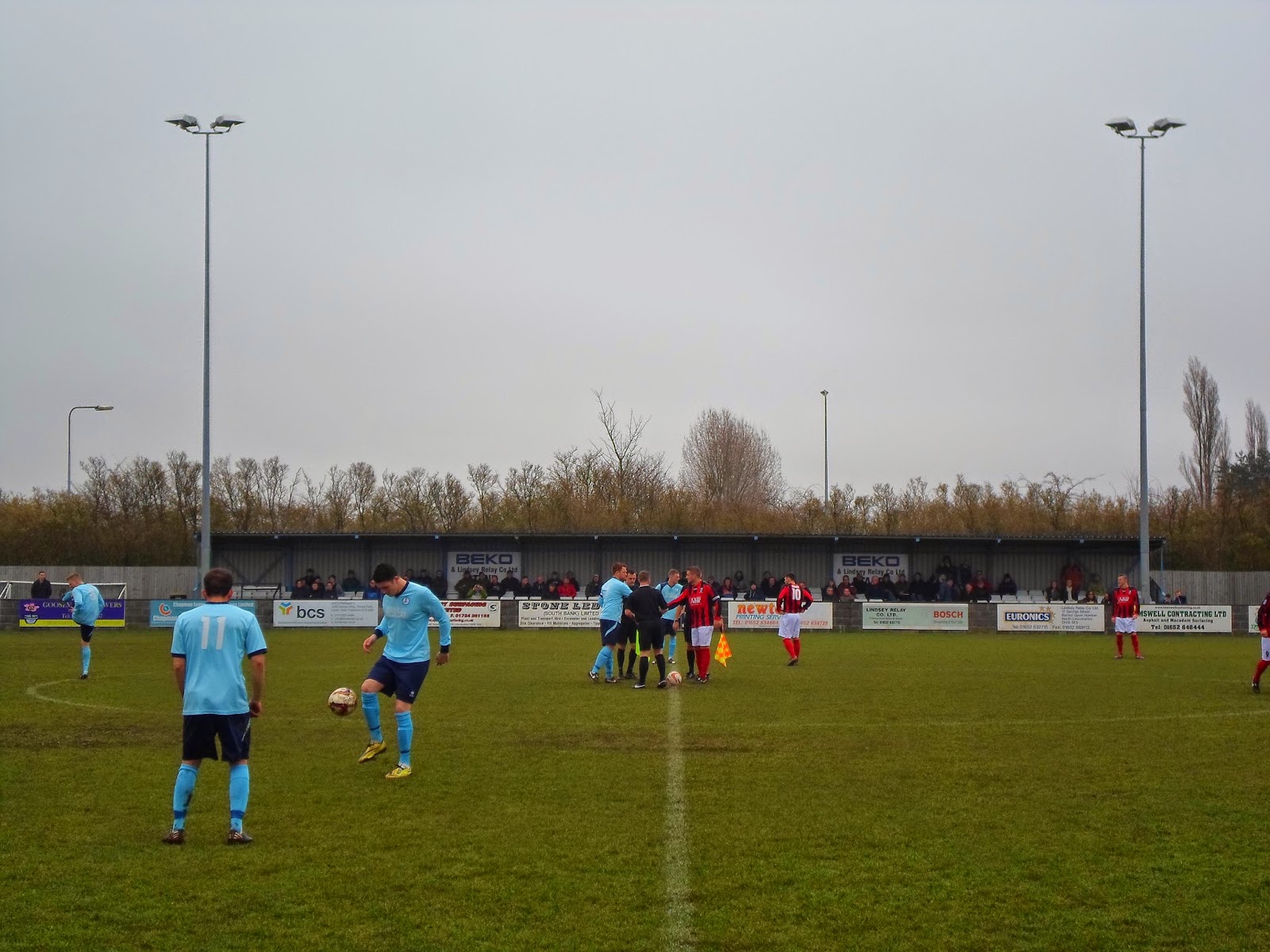 Barton Town Old Boys Football Club was formed in the summer of 1995 after the merger of the town’s two established clubs; Barton Town and Barton Old Boys.
Barton Town formed in 1880 and were one of the founder members of the Lincolnshire League, which was won in 1960-61. The club went on to have two spells in the Yorkshire League, with a few seasons in the Midland League sandwiched in between. The club returned to the Lincolnshire League in 1981, winning the title in their first season and remained in the league for a further decade, before dropping out due to finances
.
Barton Old Boys had been a member of the Scunthorpe and District League since 1959. The club became one of the most successful clubs in the league culminating in winning of all four major Scunthorpe League competitions in 1994-95.

The new club began life in the Lincolnshire League in 1995-96 season, winning the title the following season. The Swans joined the newly formed Humber Premier League for the start of the 2000/01 season, after a third place finish they progressed to the Central Midlands League. The club joined the Northern Counties East League in 2007-08, winning promotion to the Premier Division in 2010-11 after finishing runners-up to Staveley MW. 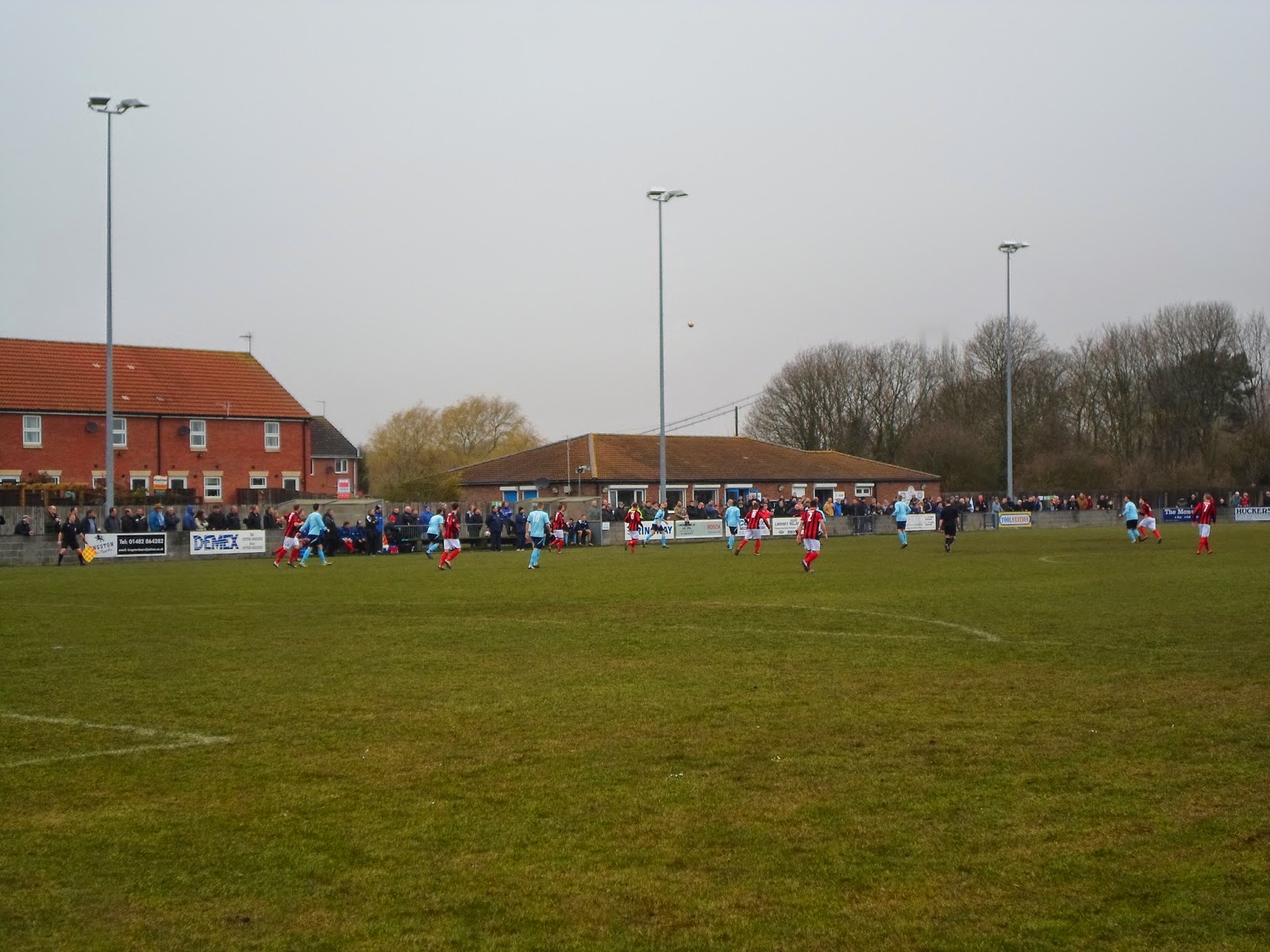 The club play at Marsh Lane which was the home of Barton Town since 1927.  Entrance to the ground is in the corner next to the the changing rooms and clubhouse building. The main stand is over the far side, which sits central and made up of 240 white flip seats across four rows. There are two identical standing enclosures each side of the goal posts at the top end, and the rest of the ground is open with the dugouts on the clubhouse side. The ground is now known as The Euronics Stadium as they are the main club sponsor. 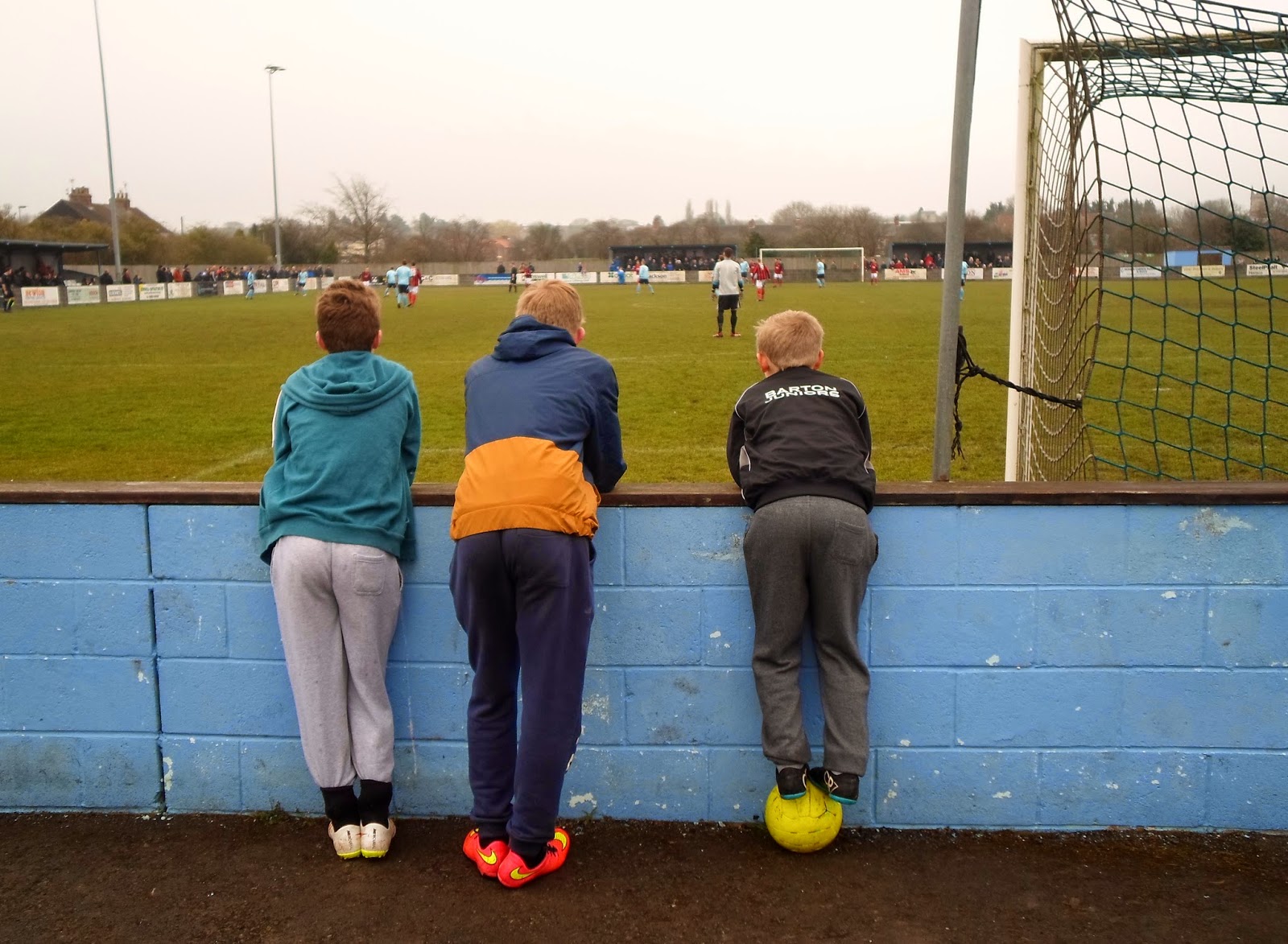 Cleethorpes Town backed by a large and noisy following kept their title challenge alive with a convincing victory. The Swans could have been a few goals to the good before Brody Robertson gave the visitors the lead on 36 minutes. The striker picked up the ball on the left wing before cutting inside, his initial effort was blocked by the defender but he found the net at the second attempt with a neat finish.
Barton worked hard to grab an equaliser but were undone late on when Louis Grant rounded off a quick counter attack on 87 minutes, before Robertson fired in his second deep into injury time, latching onto a long ball for an easy task from close range which send the travelling hordes into raptures. 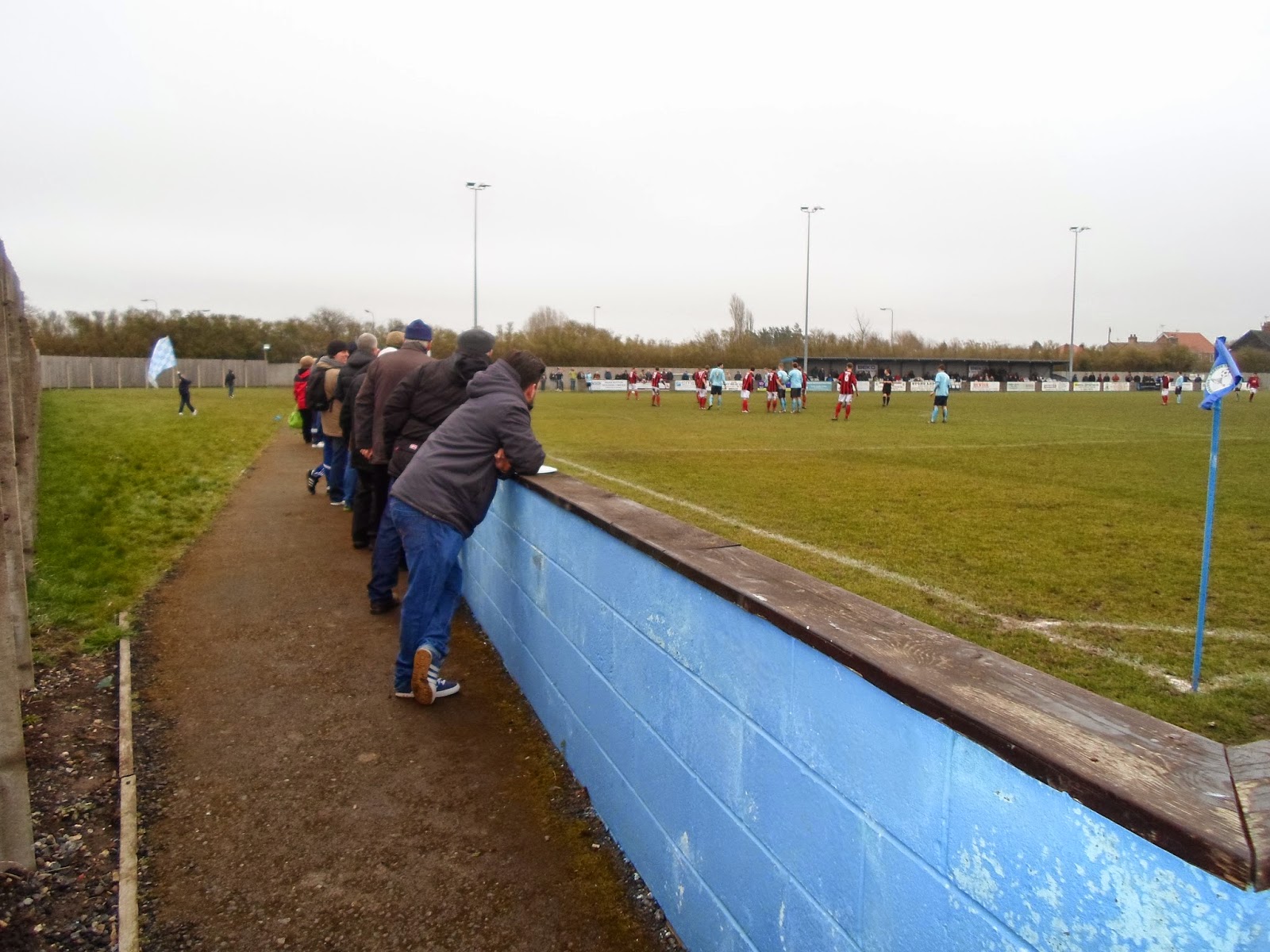 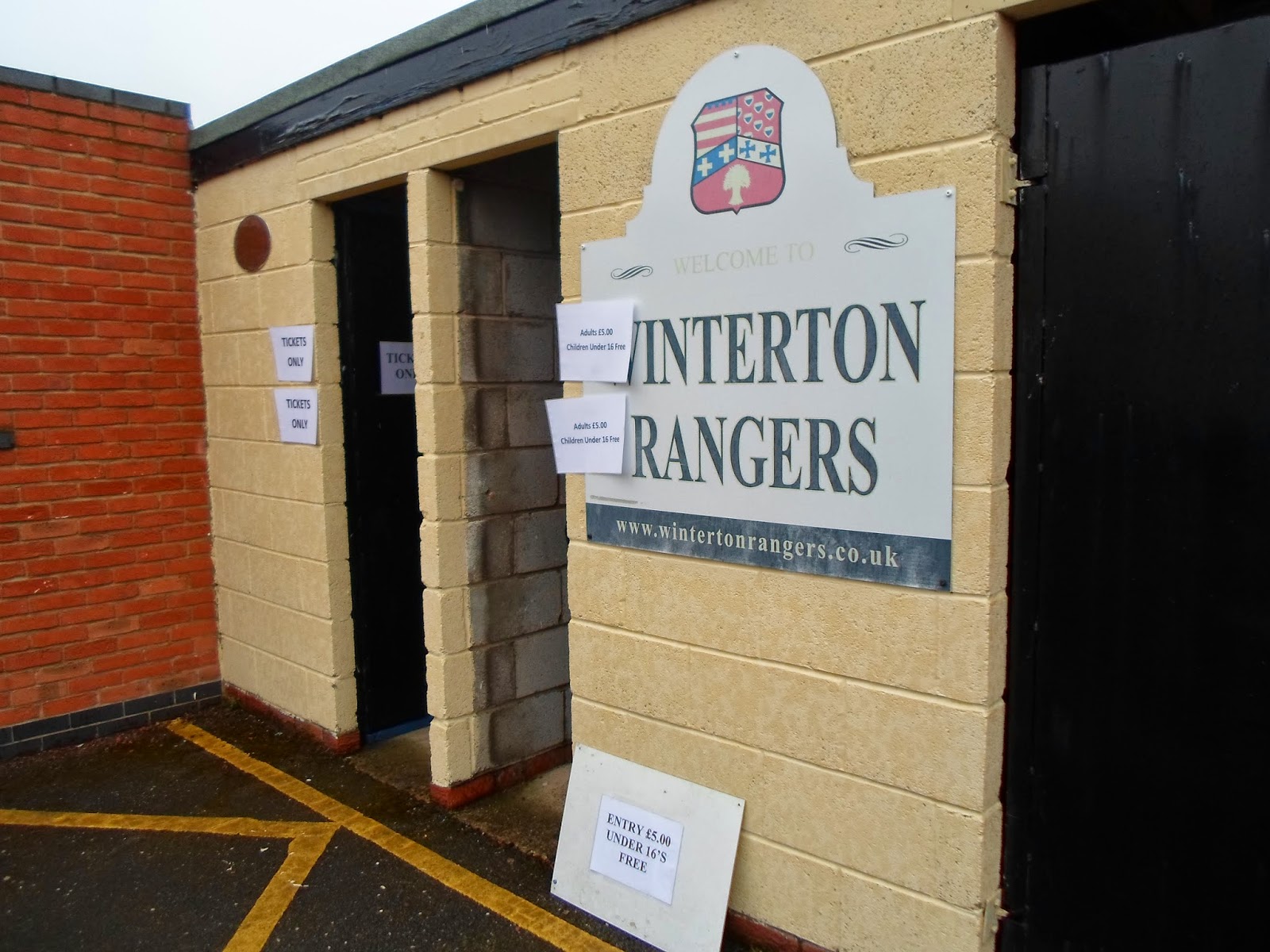 For the second game of the day we headed 8 miles west along the A1077 Ferriby Road to Winterton, which is a small town in North Lincolnshire,  five miles north-east of Scunthorpe on the banks of the Humber. The history of Winterton goes back to Roman times with several large mosaic floors and findings of other Roman remains in the town. 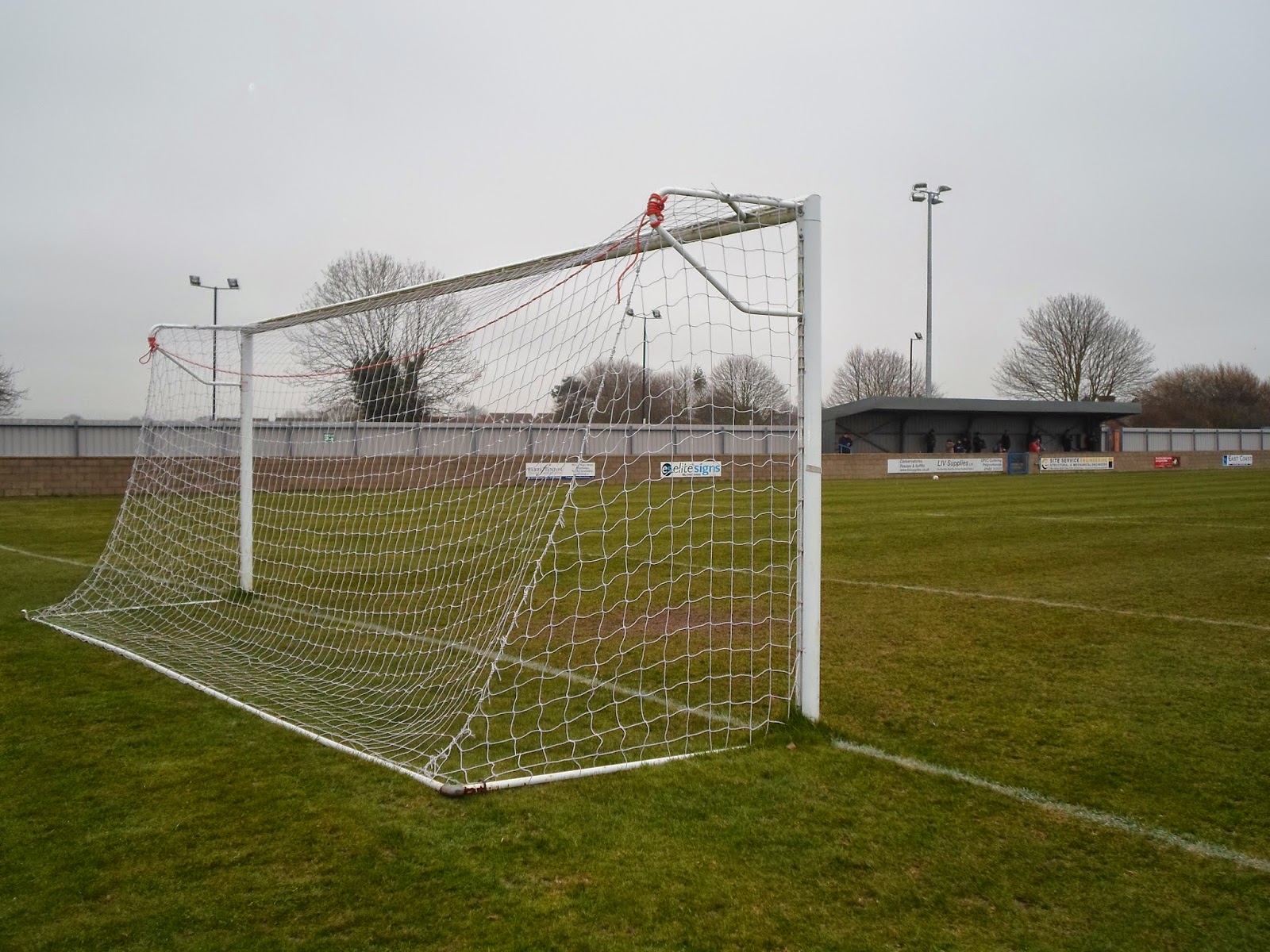 Winterton Rangers formed in 1934 and became members of the Scunthorpe & District League in 1935 .They spent five seasons in the Lincolnshire County League from 1965 until they accepted an invitation to join the Yorkshire Football League. They won a hat-trick of league titles during the 1970’s, before becoming founder members of the NCEL in 1982. After just two seasons the club disbanded due to financial difficulties, but reappeared in 1986, re-entered the NCEL Division 2
In 2007-08 season they were Premier League champions winning the title by a clear 13 points and bagging 116 goals. They are currently back in the First Division after being relegated last season. 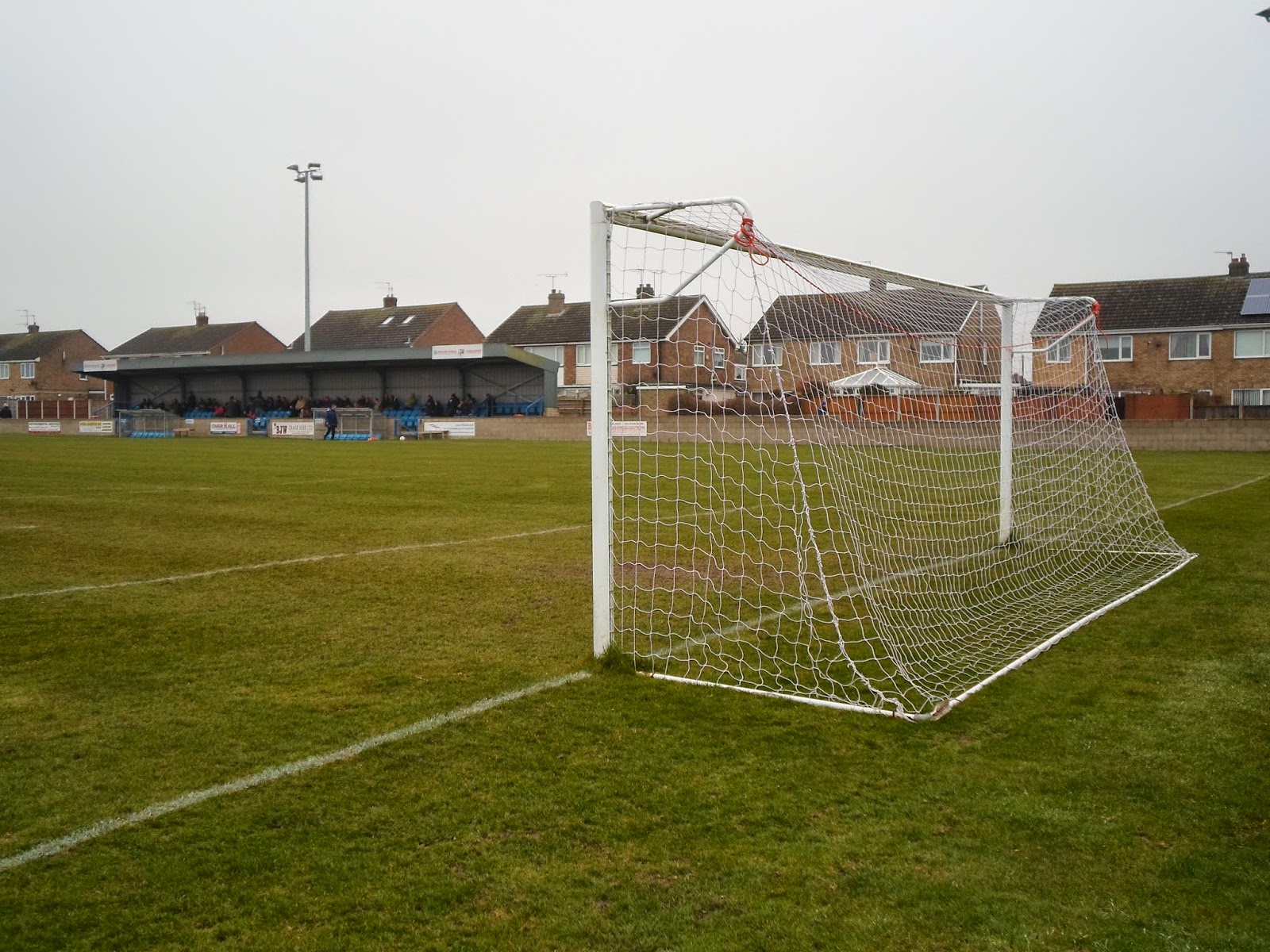 Winterton originally played at Sewers Lane, then Watery Lane until purchasing the land at West Street for £700 in 1950. The players originally used the Butchers Arms before installing an ex-Army hut from a POW camp for changing facilities. The land was sparse with just an adjoining cricket field but nowadays the area has grown, surrounded by modern houses and the football ground now reflects its contemporary surroundings.
The ground has two identical stands on each side, one having 245 blue flip seats bolted to its three steps and the other a standing terrace.  The rest of the ground is open with hard standing behind the goals. Next to the entrance is the main building which has the changing rooms, Rangers cafe and the Rangers Bar at the back. 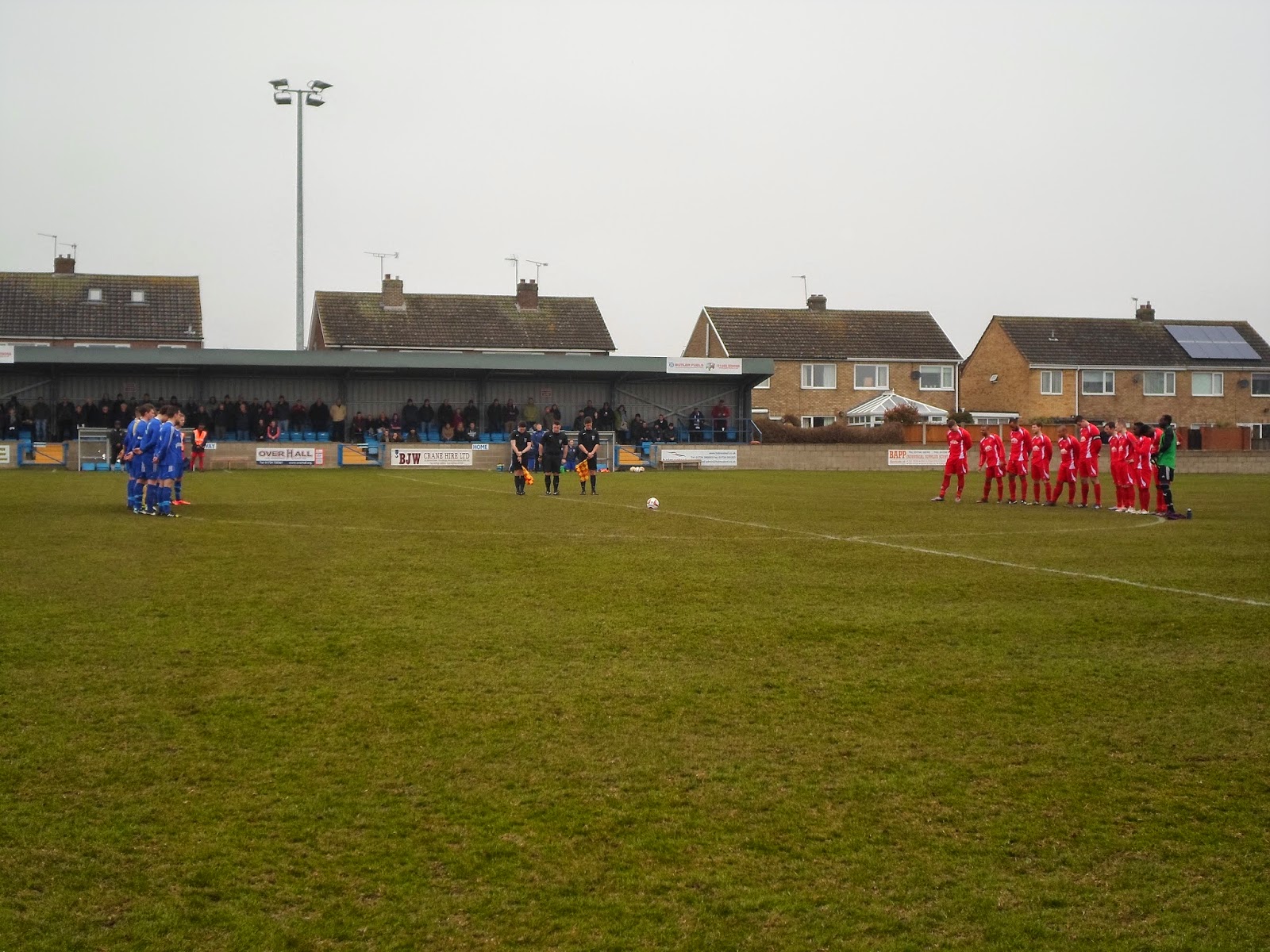 Rangers came from behind with a daisy cutter from Jack Start just before half time giving them a share of the spoils. Amas ‘keeper Bojang pulled of a string of fine saves before Joel Hughes headed in a close range header after quarter of an hour. The equaliser came on 41 minutes when the ball dropped to Start on the edge of the box, his shot trickled into the corner of the net with Josh Batty trying to claim the goal, maintaining it took a deflection on route to goal. The second half was a pretty even affair and the draw was the just about the right result. 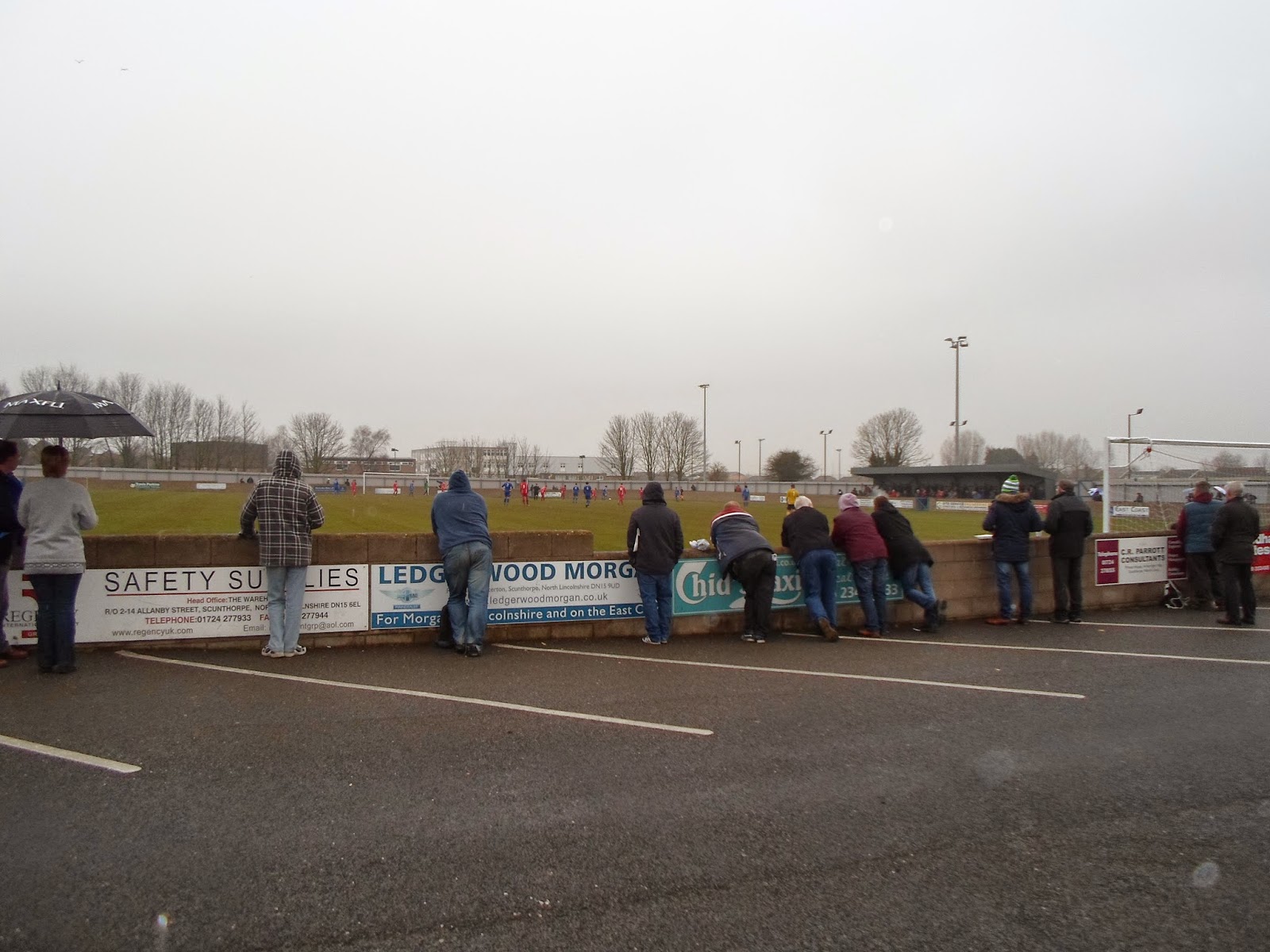 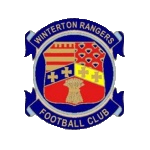 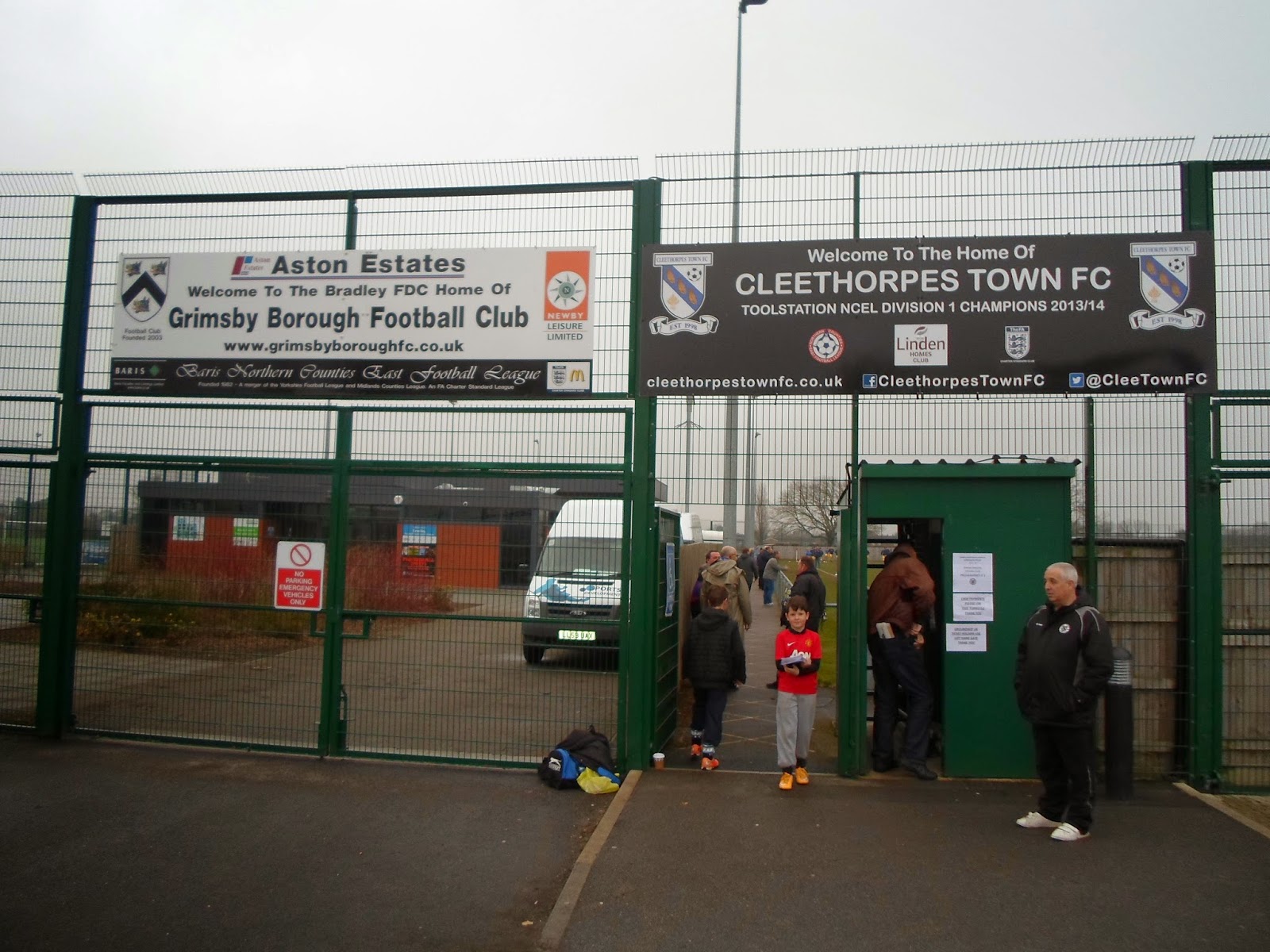 The trio of today’s matches concluded on the outskirts of Grimsby at the Bradley Football Development Centre. As there was a few hours spare before the 6.30 kick off we took a detour to Brigg. Last week Graham Precious teased me on Facebook with a picture of the Wetherspoons pub in the town and the fact I hadn’t been to The White Horse. This was soon rectified with a ‘Fish Friday’ tea, a couple of cups of coffee and a half of Milk Stout. The distance between the two grounds was 28 miles, so we still arrived in plenty of time, a good half an hour before kick off. 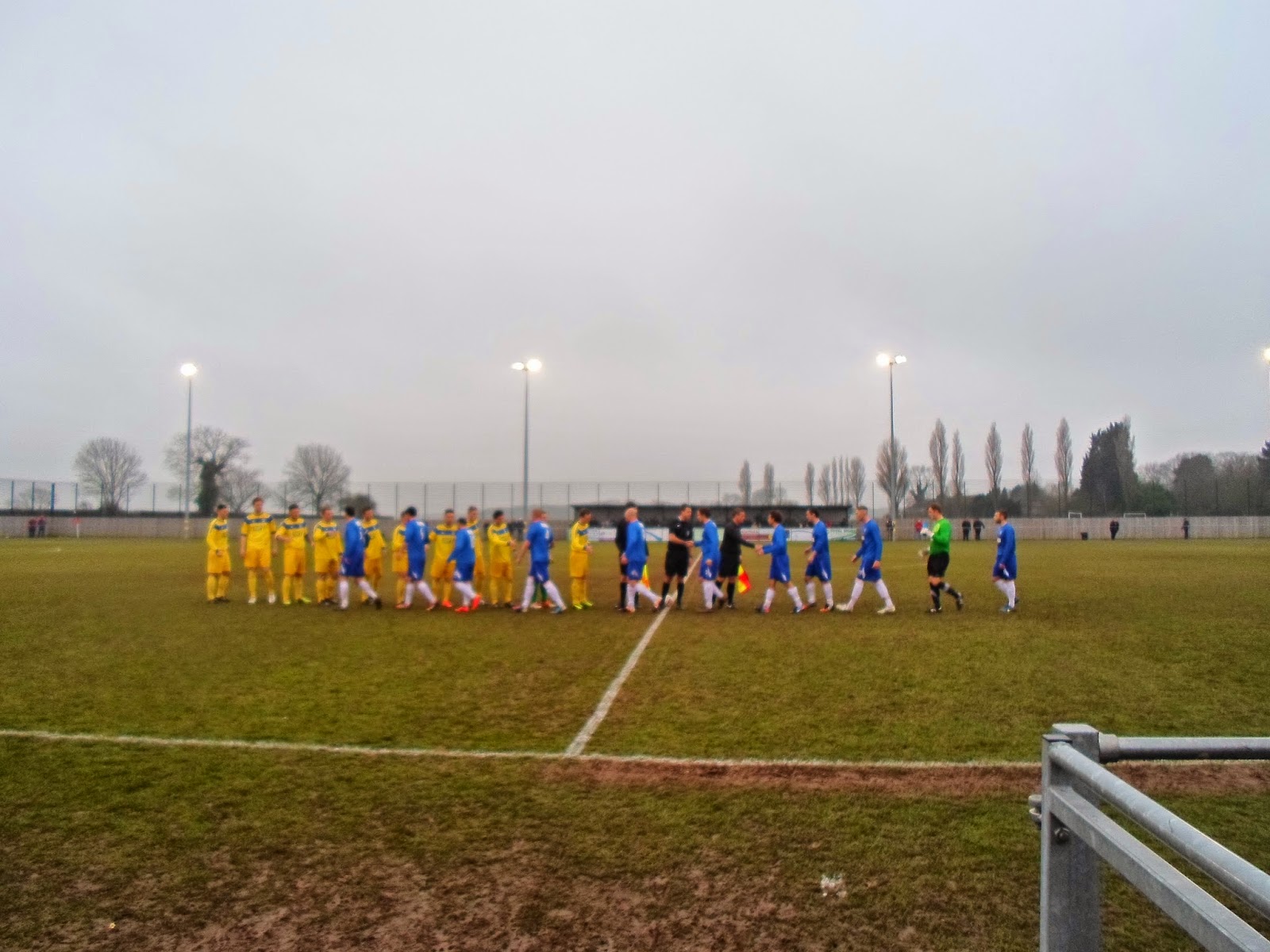 The club was formed in 2003 after a meeting at the Lord Tennyson pub in Louth. Borough are another club who started life in the Lincolnshire League, finishing runners-up in their first campaign to earn promotion to the Central Midlands League Premier Division in 2004.
They finished second in their debut season but were unable to gain promotion as they failed to meet the required ground criteria. They finished runners-up again in 2006-07 and promotion was granted to the Supreme Division, having agreed on a groundshare with Brigg Town. The following season despite finishing mid-table, they were invited to join Division One of the Northern Counties East League, where they’ve played since. 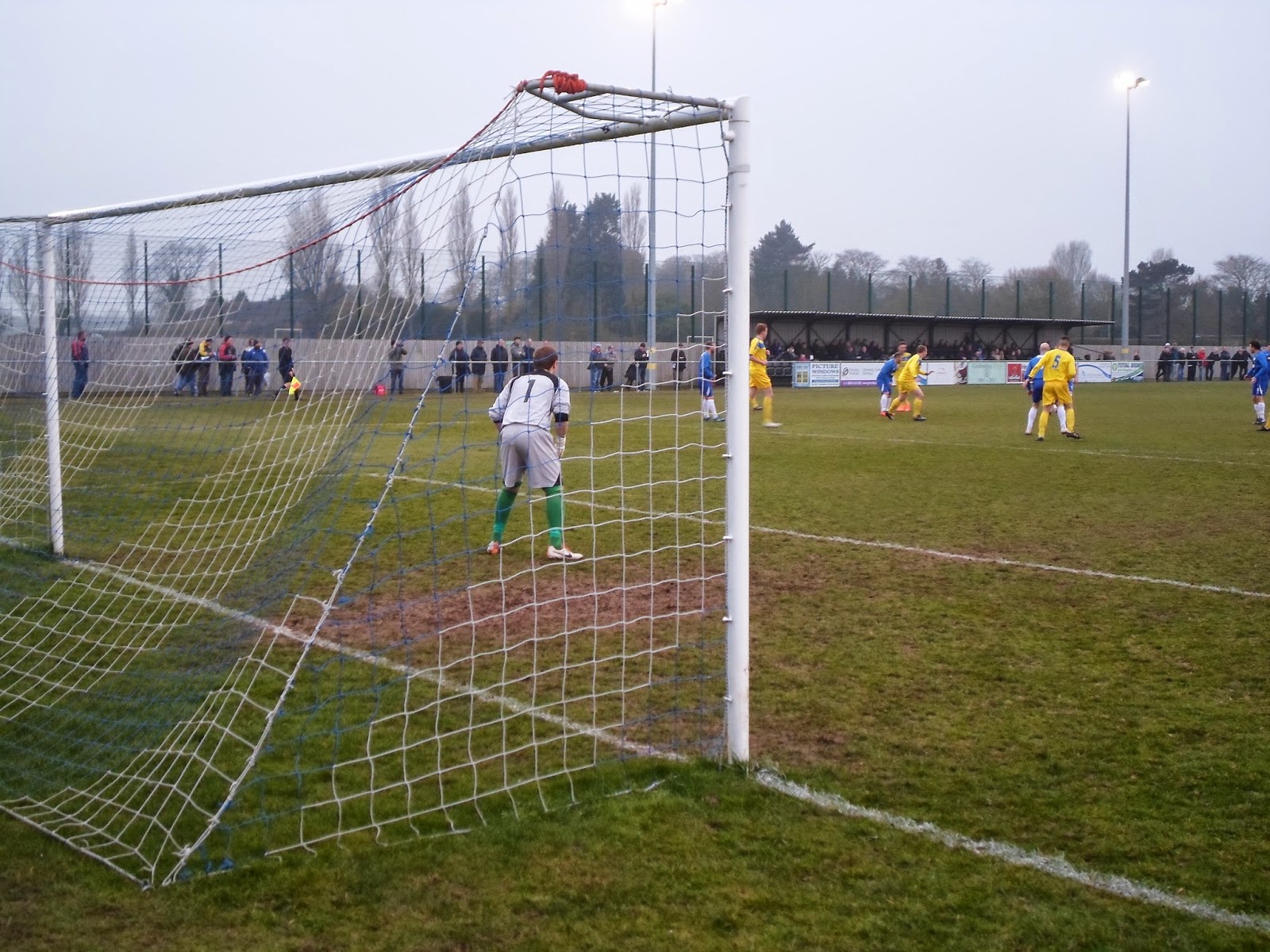 “The Wilderness Boys” originally played at the King George V ground, before playing at the Grimsby Institute of Further & Higher Education following their promotion to the Central Midlands League. After the groundshare at Brigg Town's, they moved to the new Bradley Football Development Centre in 2010. The first game at the new council owned stadium was against Scarborough Athletic on the 24th November, where over 580 people saw Borough lose a NCEL League Cup tie 4-3.
The ground is pretty basic with a standard seated stand on one side and a cover directly behind the top goal. The ground is open with hard standing on all sides. The refreshment and bar facilities plus the changing rooms are all in the main building. The ground is currently share with Cleethorpes Town, which means there’s a club from Cleethorpes playing in Grimsby and a club called Grimsby playing in Cleethorpes!!! 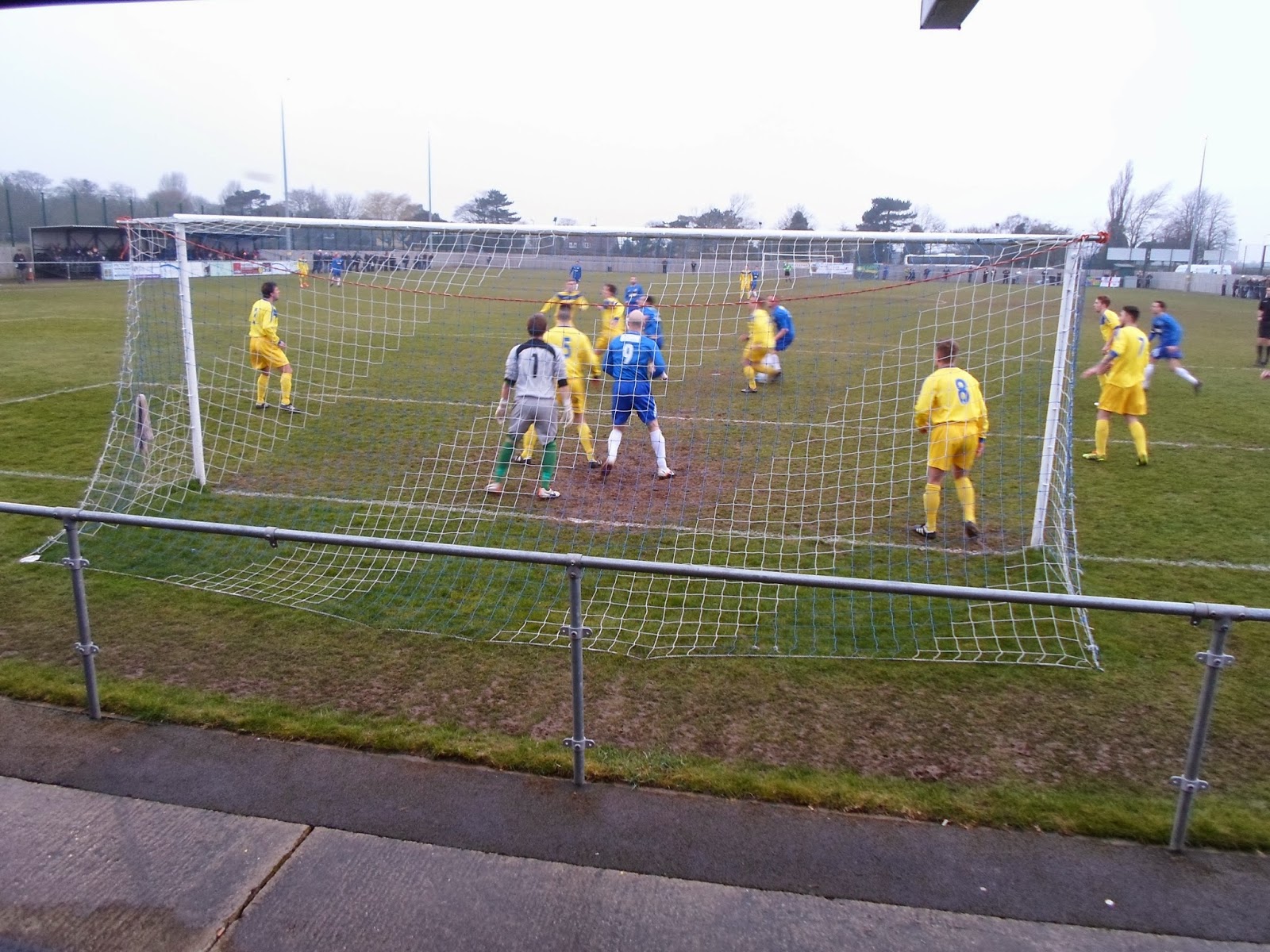 I recently saw bottom of the table Borough in action just a few weeks ago at Yorkshire Amateur. On that occasion they made a promising start to the game, but still managed to get gubbed 5-0. Again, they were on the front foot from the kick off against Hall Road Rangers, but conceded in the fifth minute after a cracking 25 yard drive from Daniel Walker with the visitors first decent attack. After that early setback another good hiding looked on the cards, but they grabbed a well deserved equaliser on 21 minutes, when Peter Fuller was on hand to fire home a left wing cross from six yards.
Grimsby Borough probably produced their best 45 minutes of the season in the second half, dominated throughout with two fabulous goals to double their win tally for the season. Twenty minutes from time Matthew Hall picked up the ball in midfield before running at the defence and unleashing a powerful shot which gave the ‘keeper no chance. The points were wrapped up ten minutes later when Fuller claimed his second, picking up a square ball and placing his side foot effort into the far corner.
This was without doubt the best game of the day and it was pleasing to see the hosts claiming a rare victory. 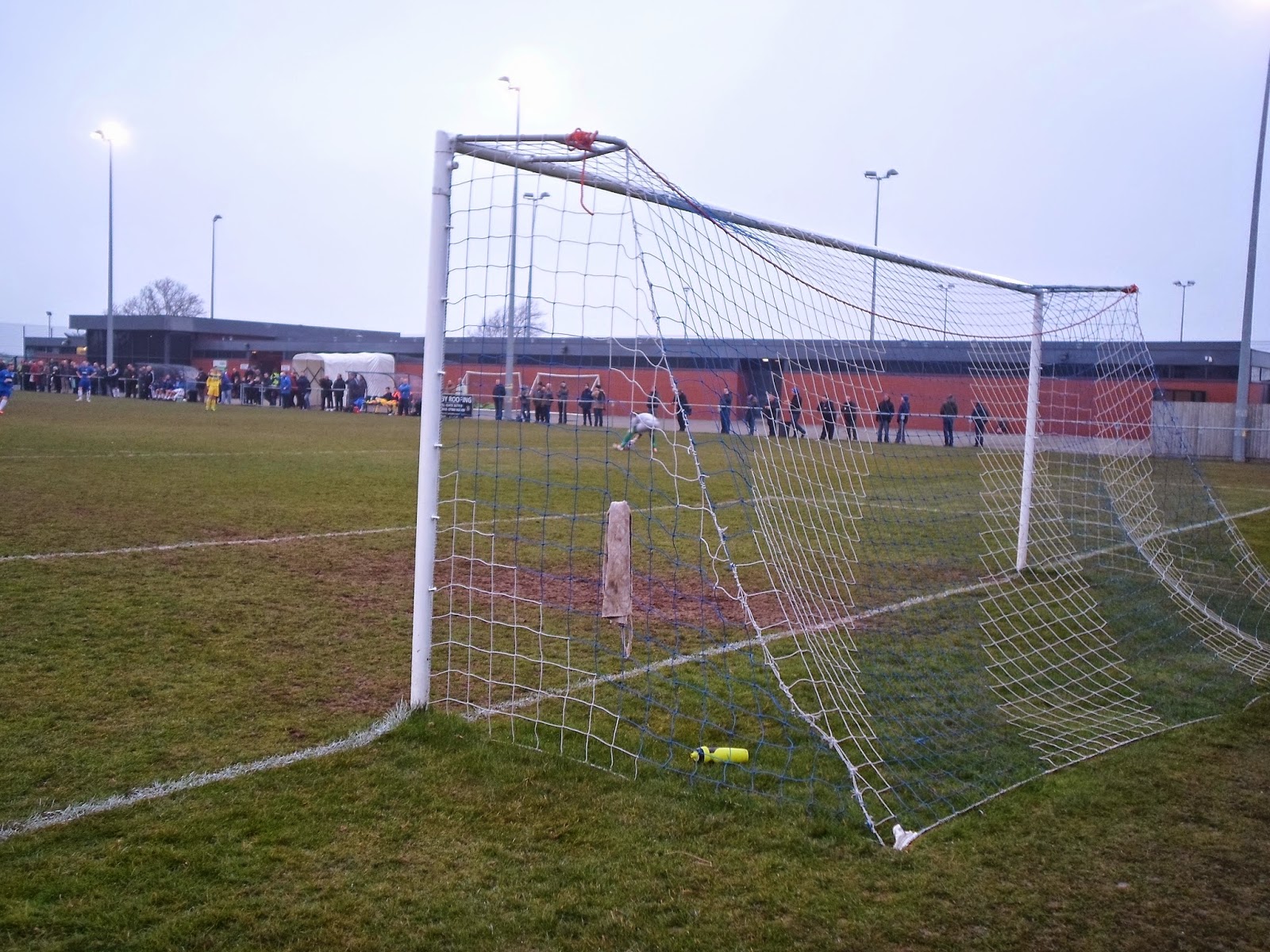 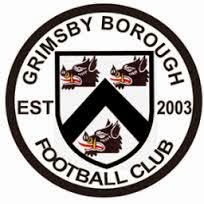 Another cracking Groundhop, and as always it’s good to catch up with friends from all corners of the UK. I didn’t spare the horses on the way home, after dropping Lee off in Houghton-le-Spring I was back at Gallowgate View for 11.15pm. A 5.30am start at work the next morning meant I was unable to attend the Saturday leg of the hop, but I’m sure another grand day out was had by all.