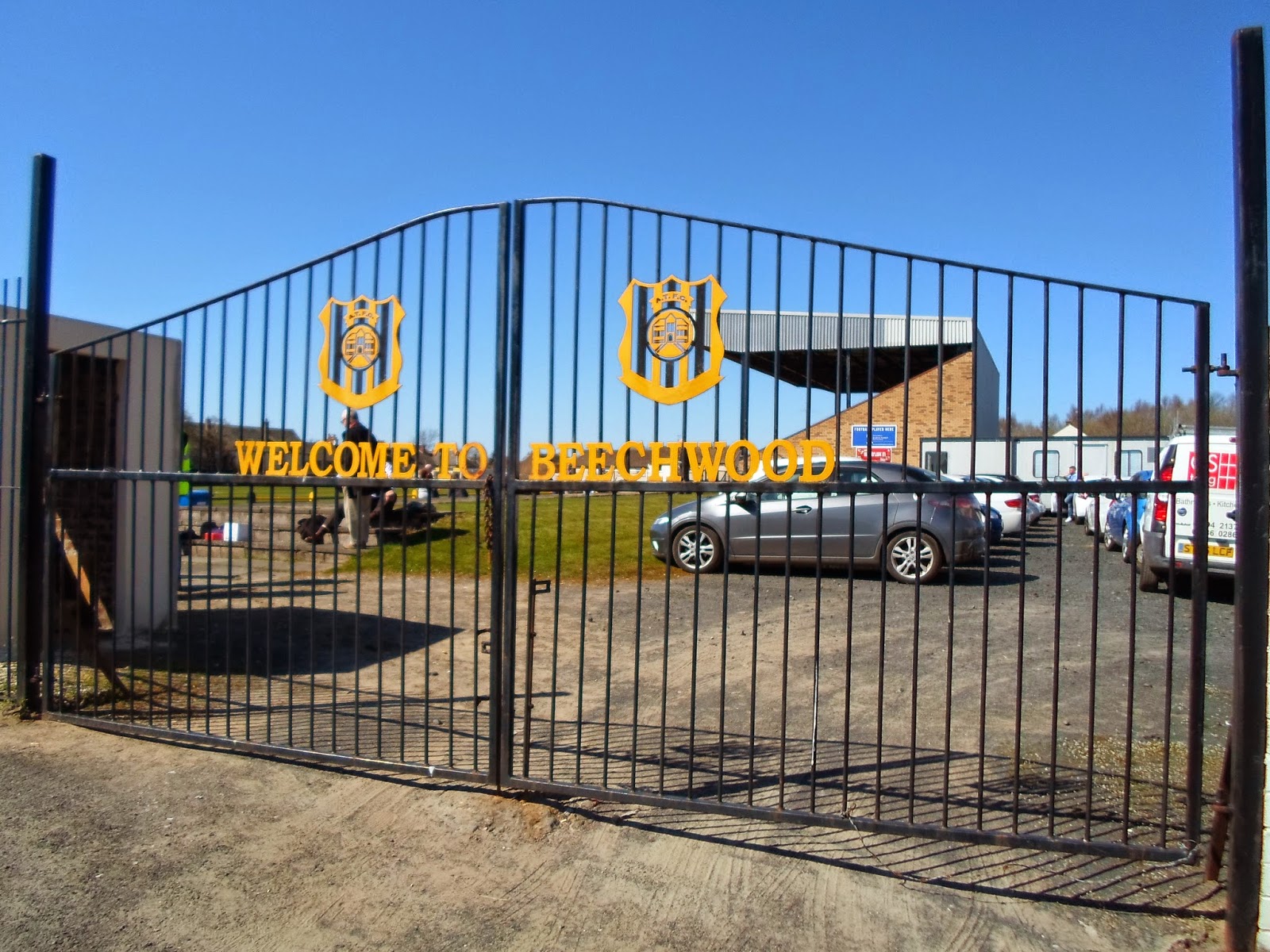 Another trip into the Scottish Juniors for the big clash between Auchinleck Talbot, the most successful club in the Junior Cup against the current holders Hurlford United in an all Ayrshire semi-final.

Wherabouts and Whatsabouts
Auchinleck is situated at the heart of the ancient Kyle district in Ayrshire. The name derives from Scottish Gaelic -  achadh ('field') and leac ('slab') meaning a 'field of flat stones'  There are records of a community existing from the early 13th century, however the village came to prominence with arrival of the Boswell family in 1504. The marriage of a daughter of Sir John Auchinleck to Thomas Boswell, saw the estate and the title of laird granted to Boswell by King James IV. The family’s diligence of their large estate saw the growth of a practical village community emerge from the surrounding barren moorland.

The village benefited from mining and quarrying in the area, which saw the population rise fourfold in fifty years to almost 7,000 by 1881. The Nationalisation of coal industry in 1947 brought investment, along with the building of the Barony Power Station in 1957. However the village went into industrial decline after the demise of deep pit mining and the closure of the power station in 1989.
Surrounding the village is Auchinleck House, which is an 18th-century Category A listed mansion. The estate has the remains of Auchinleck Castle and Auchinleck Old House and it was the former home of the lawyer, diarist and biographer James Boswell, 9th Laird of Auchinleck.  His biography of Dr. Samuel Johnson is regarded as an important stage in the development of the modern genre, claimed at the time as the greatest biography written in English. 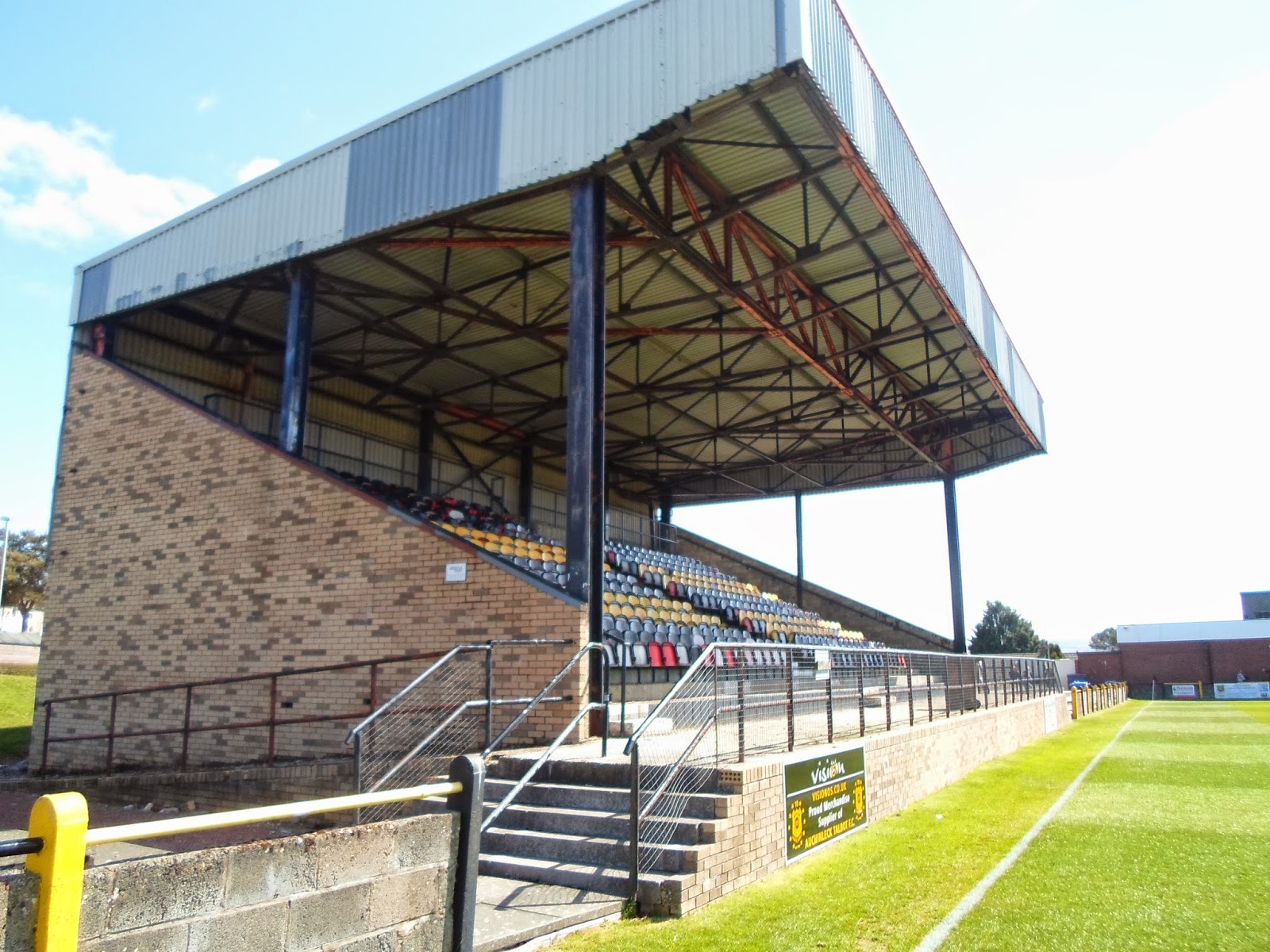 Plantpot History
Auchinleck Talbot formed in 1909 and are named in honour of Lord Talbot de Maldahide, the man who gifted the club their Beechwood Park home. Due to financial problems Talbot folded in 1916 but returned four years later, winning the Ayrshire Cup with a 3-0 victory over Irvine Meadow. In 1920 they set a club goalscoring record in the Scottish Junior Cup, defeating Craigbank 11–0 at home, a scoreline they surpassed when hammering Nairn St. Ninian 13–1 in 2008. 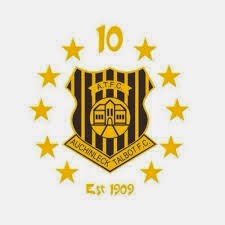 Talbot are the most successful club in the history of the Scottish Junior Cup, lifting the trophy on ten occasions, stretching back to a 3-2 victory over Petershill in 1949. They became the first club to lift the trophy in three consecutive years with a 3-2 win over Pollock in 1986, followed by single goal victories over Kilbirnie Ladeside and Petershill. At the turn of the 1990’s they beat Newtongrange Star and Glenafton, with their next success coming 14 years later against Bathgate Thistle in the 2006 final. In recent years they have been the team you have to beat in the cup, with Talbot triumphant over Clydebank in 2009 in their centenary year, Musselburgh Athletic in 2011 and Linlithgow Rose in 2013. The chance of another three in a row was denied after losing the 2012 final to Shotts Bon Accord.
Its not just the Junior Cup where honours have been won, there's also eleven Ayrshire League titles, three West of Scotland Super League Premier Division and they won the West of Scotland Cup nine seasons out of ten between 1979 and 1989, plus there's also an array of regional cup competitions to add to the trophy cabinet. 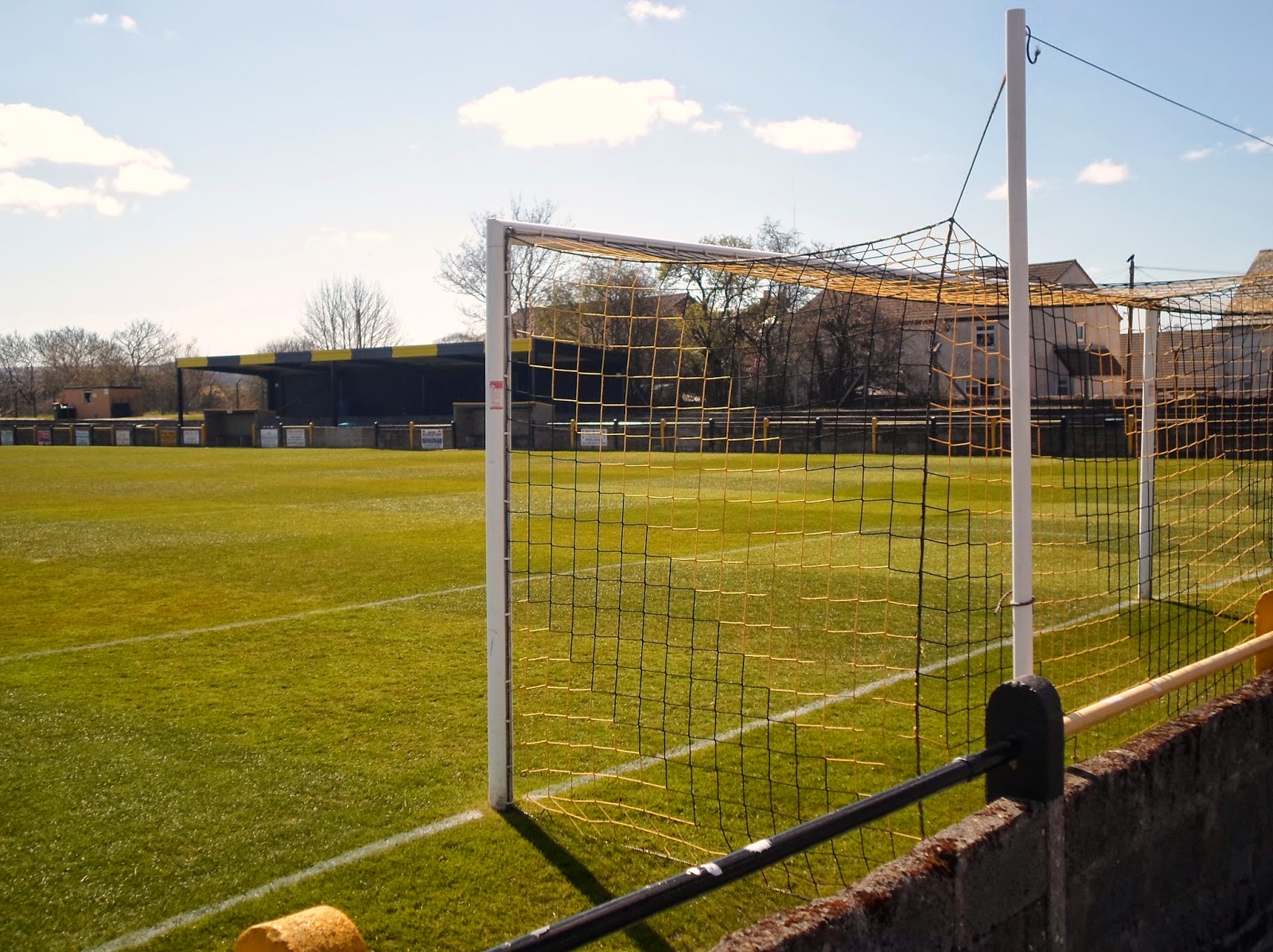 The ground is dominated by the impressive main stand, which was opened in 2005 and sits halfway with a mixture of 500 different coloured seats. There is terracing on all sides with covered enclosures at the far side beyond the dugouts and behind the goal at the Social Club end. On the terraces theres The Bot Shop which sells club souvenirs and Andy’s Snacks cabin which has a good selection of food and a good supply of scabby-eyes (pies) The ground has some nice touches, painted in the gold and black club colours with the club crest embossed on the walls. 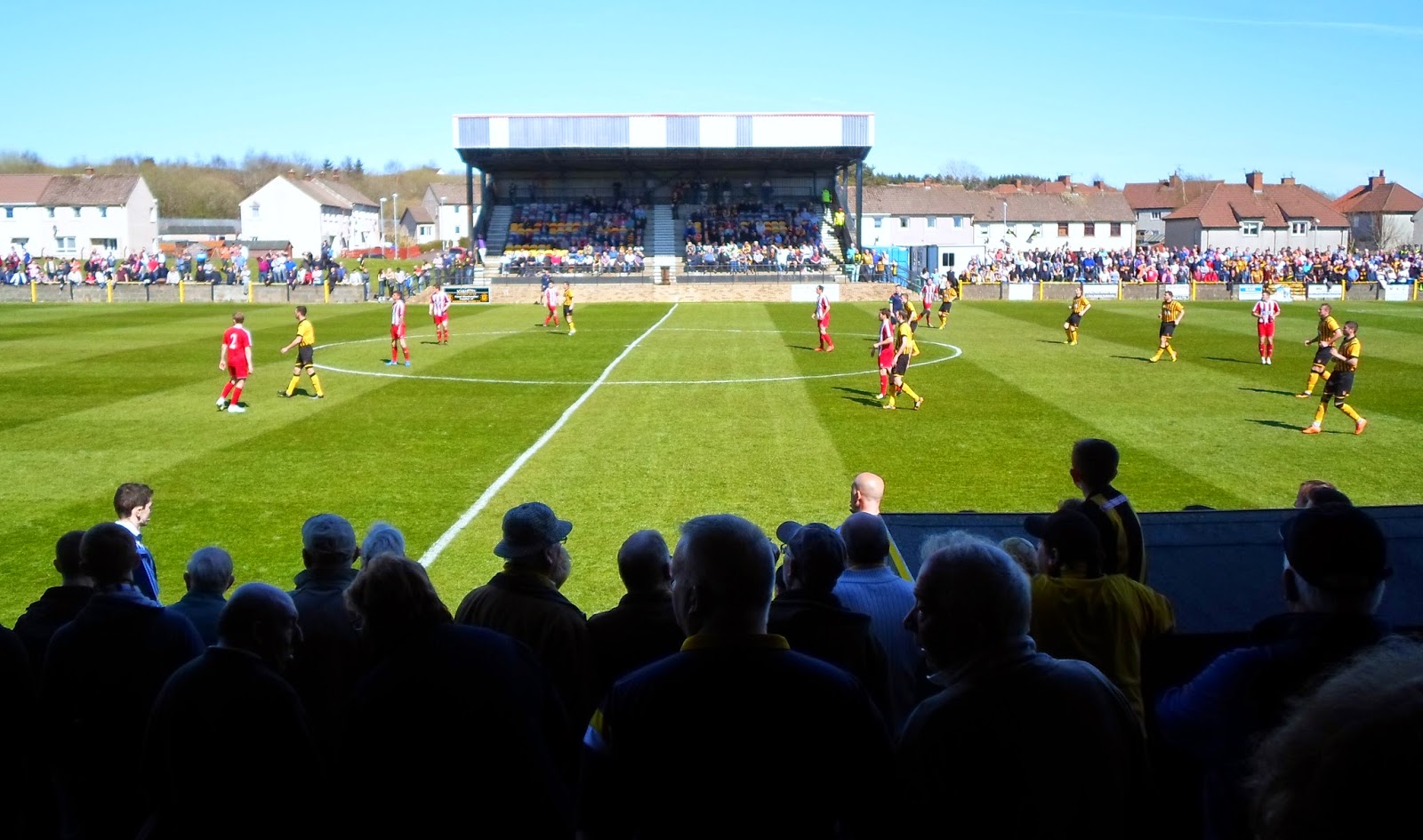 The Match
If you need to know the reason why I've fallen head over heels for the Junior game then its occasions such as this. A fabulous ground within a scenic setting, with a match full of passion, commitment and drama. The Bot went into the second leg with a handsome 3-1 lead from the first leg at Blair Park last Saturday and it seemed just a case of finishing off the job to reach their 13th Junior Cup final.

Talbot had the best of the first half, applying pressure with a few decent headed efforts on goal but nothing clear cut in a disjointed opening period. The match sprang into life just two minutes after the restart in a crazy 10 minute spell as I was queuing up at the snack bar for a pie.
Talbot goalkeeper Andy Leishman brought down Ross Robertson in the box with the referee having no hesitation in awarding the penalty, followed by a straight red card. Without a substitute 'keeper it was left to Davy Gormley to don the goalies gloves, and he miraculously pulled off a fabulous save to deny Stewart Kean from 12 yards. The save lead to a mad scramble in the six yard box with the ball eventually put out for a corner and two players booked for playing a major part in the fracas.
From the resulting corner kick the ball was met at the far post by Robertson who headed home to put the Ford back in the tie. It was now game on with the visitors having the extra man advantage and facing an untried 'keeper between the sticks. That numerical edge didn't last much longer as two minutes later an ugly tackle from Kean meant a second yellow card, so we were back to level sides with still half an hour left to play.
This seemed to give the home side a major boost and they went onto win the tie with two individual pieces of brilliance. Just before the hour mark a Bryan Young inswinging corner swerved over the defence and directly into the far corner of the net to put his side level and restore the two goal aggregate advantage.
Hurlford failed to test the stand in 'keeper and their grip on the trophy slipped away with an ambitious effort from Keir Milliken, striking his shot wide on the left and a few yards over the halfway line, sailed high, handsome and over the 'keeper and into the net. A truly wonderful strike and a fitting goal to book a place in another cup final for The Bot. 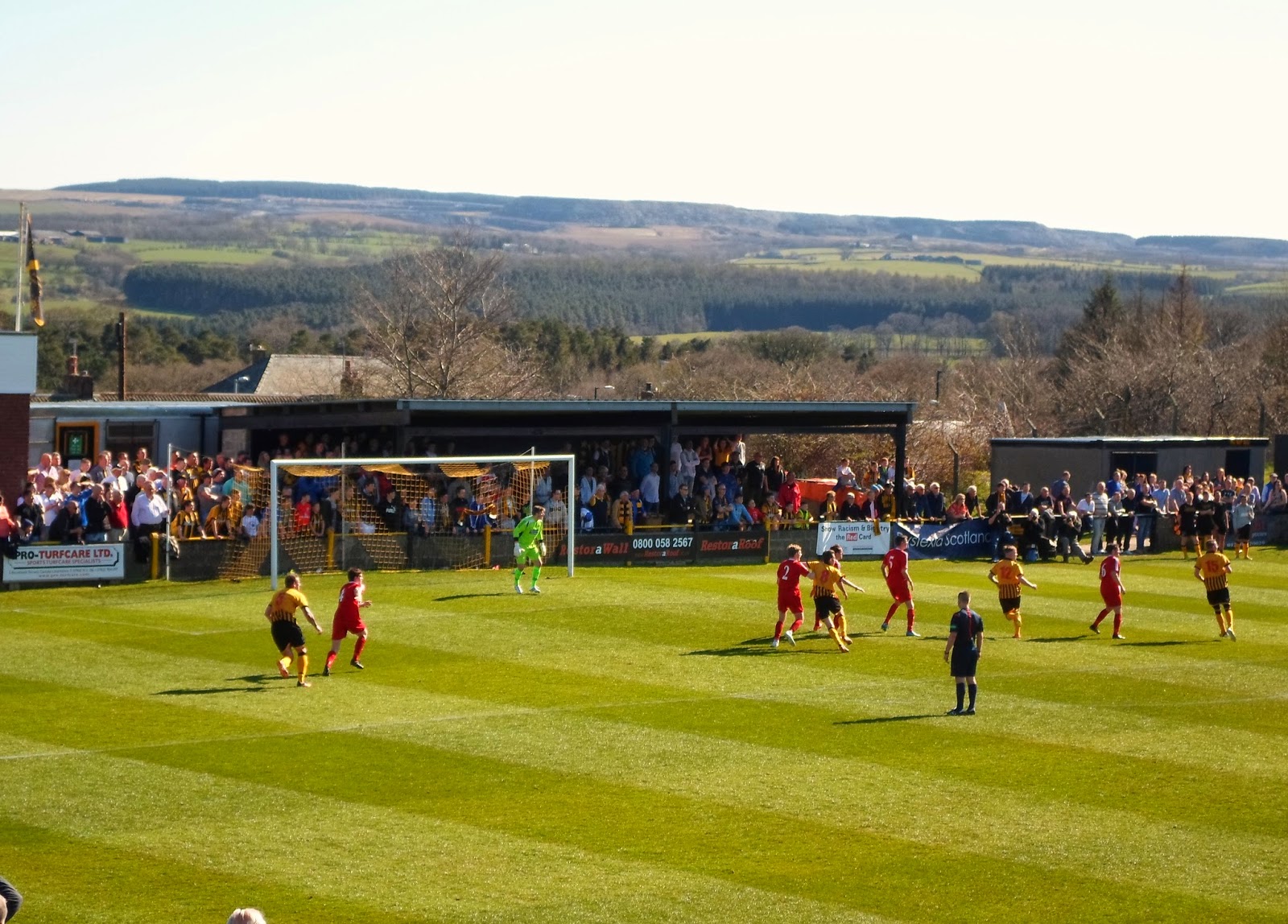 My Matchday
The journey to Auchinleck was straight forward, boarding the 0924 from Newcastle to Carlisle, then the slow train to Glasgow Central at 11.15, which goes via Gretna Green and Dumfries then onwards through Ayrshire. I had half an hour spare in between trains but managed to resisted a quick bevvy in Wetherspoon, to grab a bite to eat instead, plus I was still feeling a bit rough from the Newcastle Beer Festival the night before.

I arrived in Auchinleck at 1240 and headed straight to the ground. As there was a big crowd expected I wanted to take some photographs of a naked Beechwood Park. There was quite a few club staff already at the ground and I was made welcome and allowed a lap of snaps.
I called into the Boswell Arms for a pint before returning for a drink in the Supporters Social Club, where I met up with Donald McCrorie from the 100FgC Facebook group for a quick chat before the game.

The Railway Inn is the closest pub to the train station so I had a pint in there before the 1708 to Carlisle. The journey home was straight forward as well, due back in Newcastle nice and early at 2018. Its a this point in the proceedings that this pleasant spring day in glorious warm Ayrshire sunshine went fat bottom over large bosom! ....
..The train from Auchinleck didn't turn up, apparently there was a staff shortage so the train was cancelled, however they didn't bother to pass this valuable piece of information on to the half a dozen commuters waiting patiently on platform 2.
The next train wasn't due until twenty to seven, so this meant I would have to catch the last train from Carlisle, so I would be back home 3 hours later than scheduled. Just as I was about to go back into the village and kill an hour in the pub a bus pulled into the car park. I asked the driver if he was a train replacement and he confirmed he was going to Carlisle. I was hoping we would arrive in the border town in time for the 1941 service, but we pulled into the station ten minutes after its departure, so this meant the dreaded drunken fuelled last train home.

To cut this long(journey home) story short, I got wind of a bloke also travelling back to Newcastle who had been on the same bus from Kilmarnock. He was kicking off big style in the station office about this shoddy service and demanded a taxi home. I casually strolled into the office and with my very best little boy look entreated for a share of the taxi ride, which the gentleman in question agreed to with the train station guard only to willing to help.
So my return journey from a terrific day in Auchinleck was by coach and a taxi, arriving in Newcastle at 9.30pm and back home for ten. Of course these transport shenanigans are all part of a football travellers life, and I can life with the odd hiccup now and then, as long as the destination has been well worth the effort and today it certainly was.

Footnote
All going well I’m in the process of writing a book on the winners of the Junior Cup over the last 50 years, so I’ll be writing a more thorough piece on my matchday at Auchinleck. This chapter will also include A69 madness, pregnant women and the laughing cavalier.
You can check the progress and a map of the grounds on my list on the T’Do Page.
on April 19, 2015
Email ThisBlogThis!Share to TwitterShare to FacebookShare to Pinterest
Labels: Auchinleck Talbot, Hurlford United

Well written piece and I'm sure you enjoyed the friendship among the folks of Auchinleck.

Maybe its just me but the pic of Miss Auchinleck underneath the comments not needed!