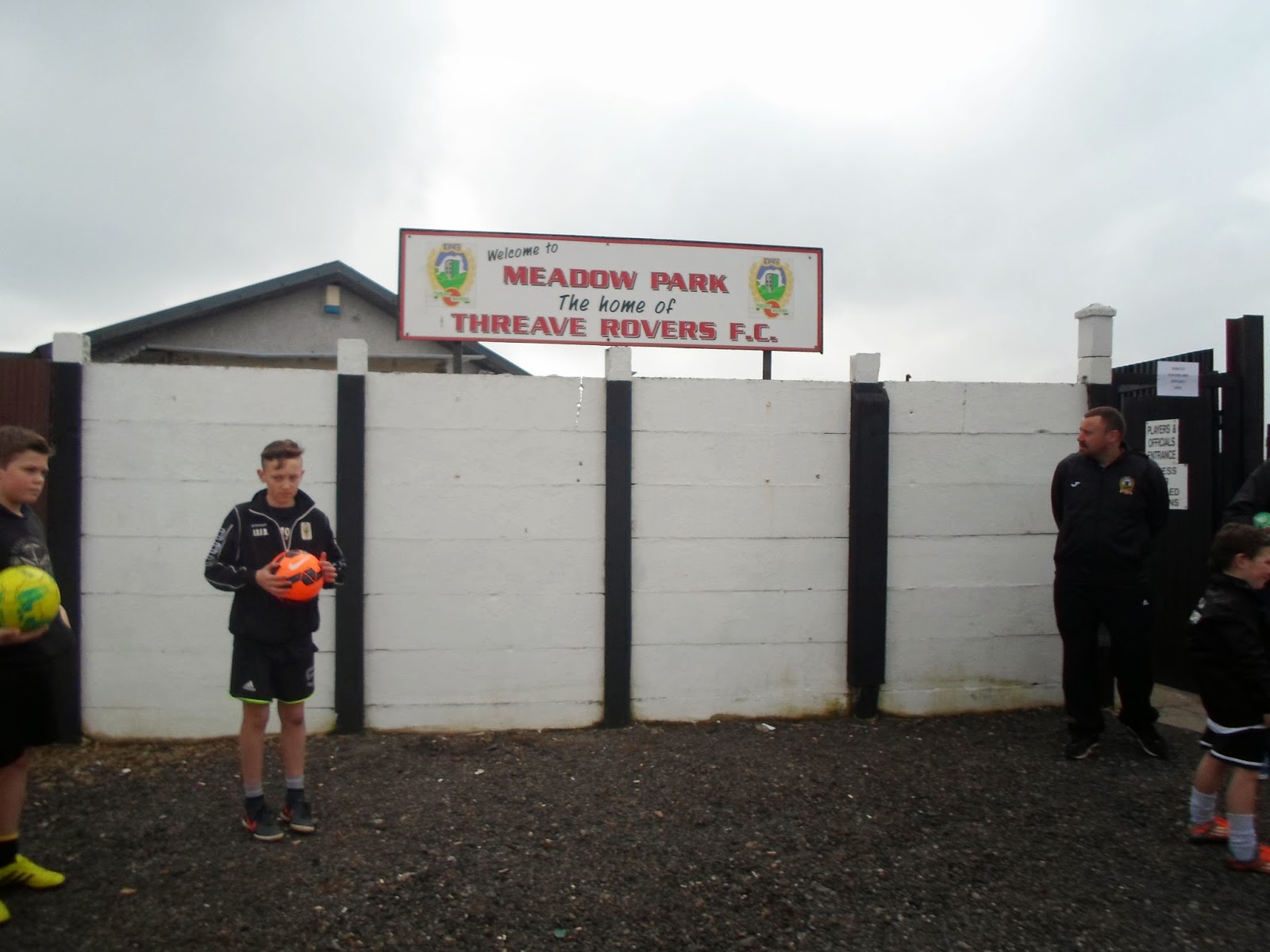 After the game at Dalbeattie Star is was a quick 7 mile drive along the A747 for the next match at Threave Rovers. The club are based in Castle Douglas, a town in the eastern part of Galloway known as the Stewartry.
The town was founded in 1792 by William Douglas, a wealthy descendant of the Douglas family who made his dosh in an 'American Trade' and created a town, based on the street grid plan pattern used in Edinburgh’s new town, which was built around the same time. Sir William also created a number of industries in Castle Douglas, including hand-woven cotton factories from which Cotton Street derives its name.
Castle Douglas is built next to Carlingwark Loch and to the north of the town Glenlochar is the site of two successive Roman forts, the first being erected during the invasion of Agricola and the second during the Antonine period. Nearby Threave Castle was a seat of the powerful "Black" Earls of Douglas from the late 14th century until their fall in 1455. 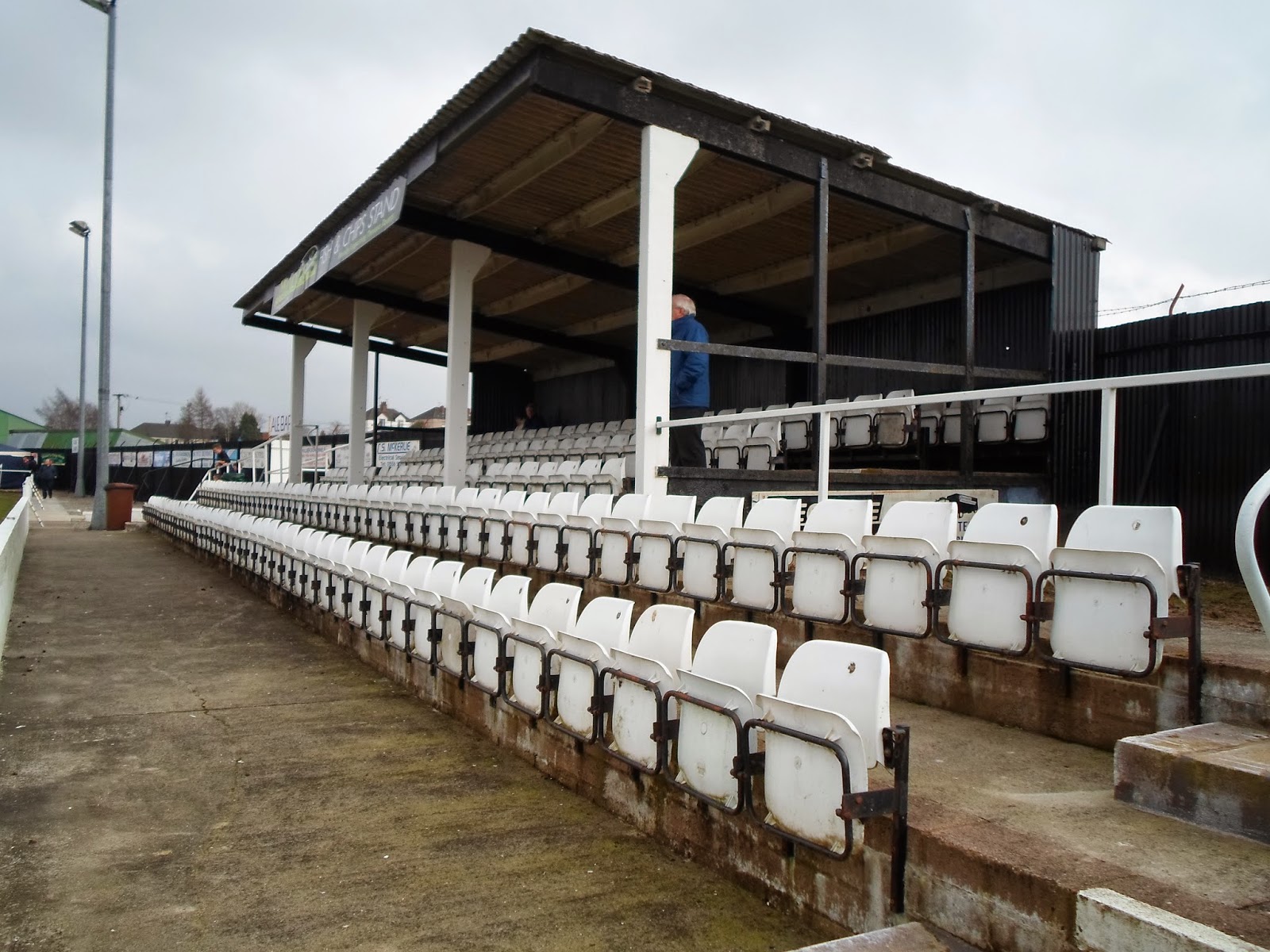 Threave Rovers FC was founded in October 1953, taking their name from the former Threave Tearooms, where ten regular customers formed a new football club. They spent their early years playing in friendlies and local cup competitions until replaced Whithorn in the South of Scotland Football League in 1959.
They won the league title for the first time in 1964-65 and a further six times before moving to the East of Scotland Football League in 1998. The reserve team continued to perform in the South of Scotland League, before the club as a whole returned in 2004 after just six season, due to the financial burden of constantly travelling east to games.
Threave won the league for the seventh time in the 2005-06 season, before going on to be champions in four out of the next five seasons. The club have also won an array of cup honours, most notably in the Potts Cup, which they've won eight times and six victories in the South of Scotland League Cup.
They produced a big cup shock when defeating Third Division side Stenhousemuir 1–0 in the second round of the Scottish Cup in 2007-08, then hosted Raith Rovers in the next round, but Rovers lost the game 0–5. Threave joined the Lowland Football League in 2013 as founder members. 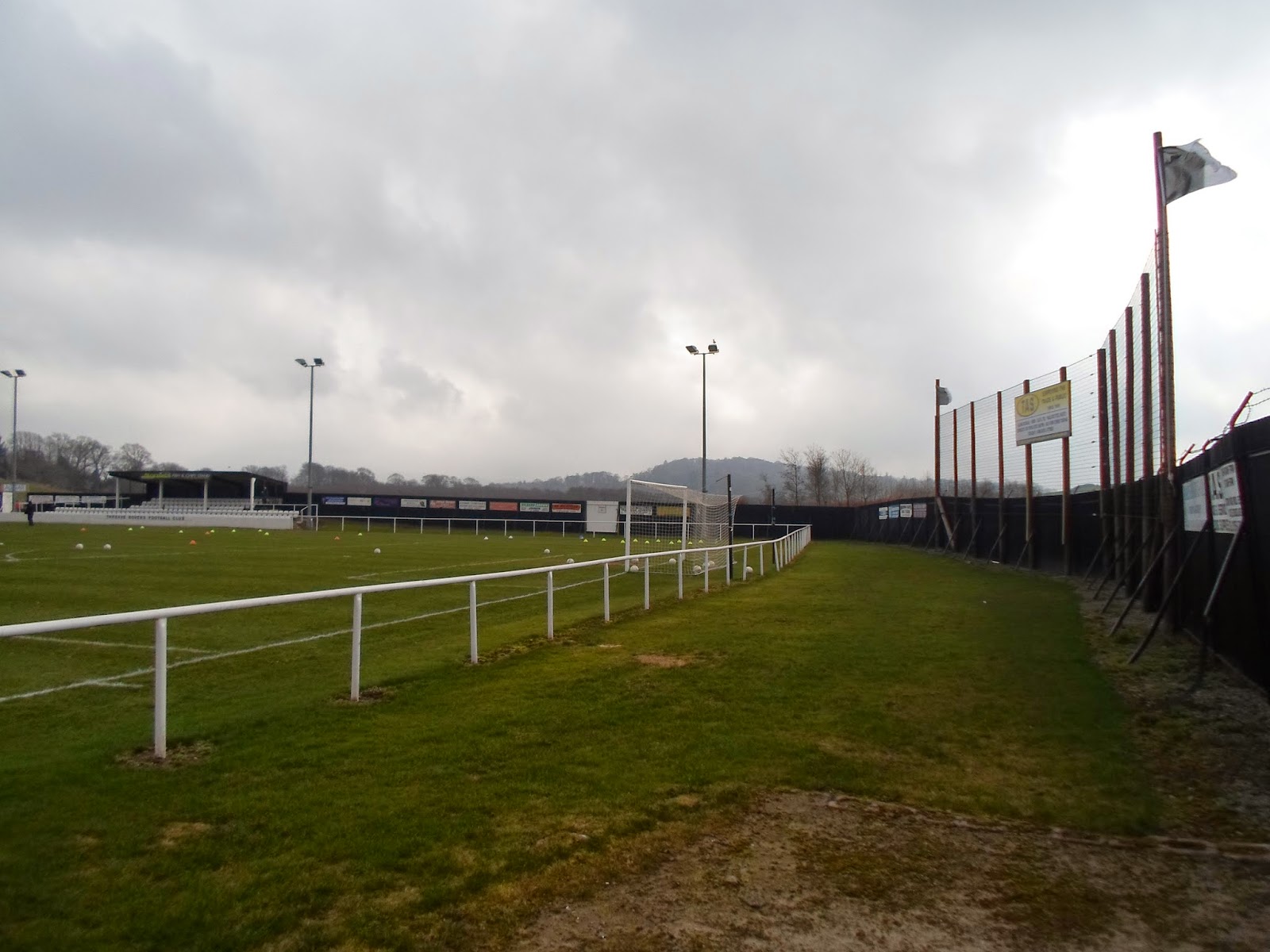 Maybe it was because of all the black and white on show that I really adored this ground. Once you enter through the paying gate all the amenities are in front of you behind the goal. The refreshment bar adjoins the entrance, with the changing room block (opened in 1996) the Rovers Bar, hospitality suite and committee room are all lined up together in gleaming white, with plenty of standing room in front.
The stand is on the opposite side with six rows of white flip seats courtesy of St Mirren’s old Love Street ground. The front two rows are larger at both sides but aren’t covered and the stand is finished off with the club name on the perimeter wall at the front. The dugouts are opposite with stepped terracing at one side running towards the entrance. The capacity is just under 1800 with around 100 seats. 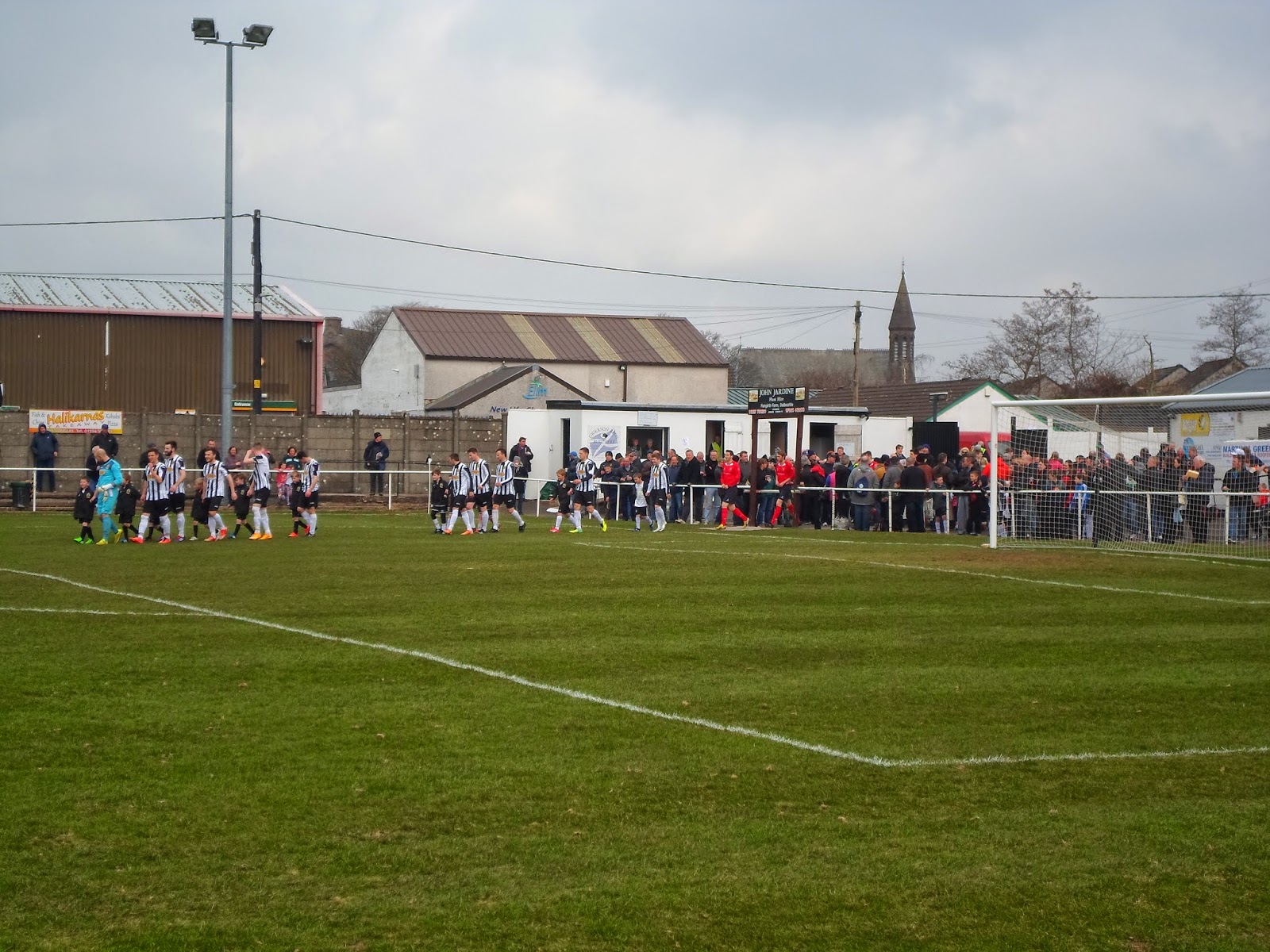 The Match
Threave Rovers’ kit comprises of a black and white striped jersey and black shorts, plus they enter the field to the sound of “Local Hero” which either means they have a connection to a club close to my heart, or they did this for my own benefit, if that’s the case, then..thank you!..it’s much appreciated!

Another good game where the form book looked to have been chucked out of the window, until Rovers were denied by a late winner. They took the lead after only seven minutes when a shot from Jamie Struthers took a wicked deflection which left the ‘keeper stranded. The lead only lasted five minutes, as Finns Daniels-Yeoman ran onto a neat through ball to fire home into the bottom corner, but they regained the advantage just before the interval with Andrew Donley nodded in a left wing cross at the far post.
The University side played really well in the second half, equalising just after the hour mark when Joe Aitken capitalised on some slack defending before Dan Ward fired in from 20 yards ten minutes from time, his strike similar to the opening goal of the game; finding the net via a big deflection.
Threave pushed for a late equaliser to grab a point which their overall effort deserved, but their case wasn’t helped by a late sending off for Ian Miller after a fracas with a Uni defender, so they remain at the foot of the table losing out to the odd goal in five. 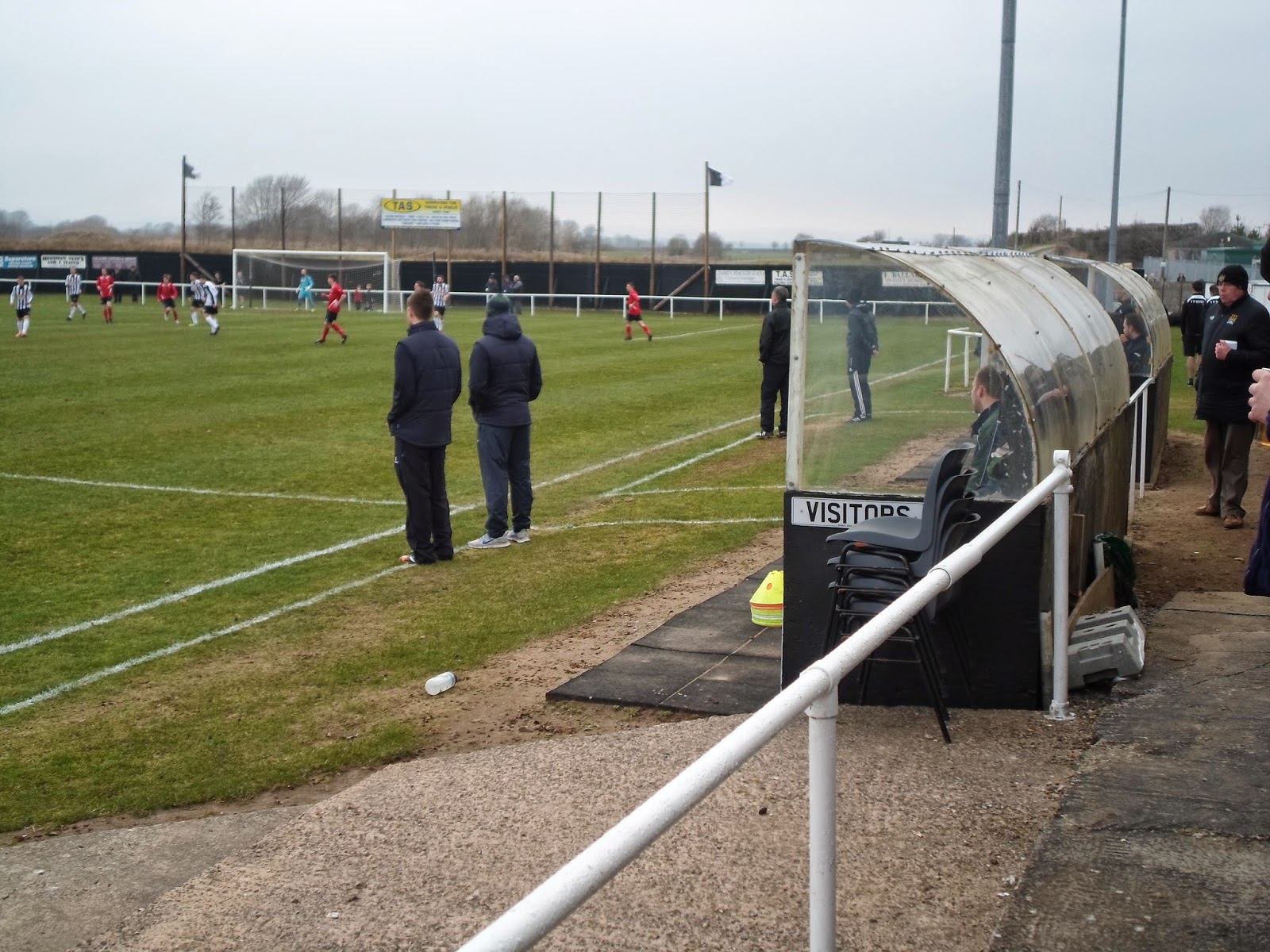 As I mentioned in the last post, it was good to catch up with groundbagging friends and everyone I spoke to said they enjoyed the weekend. The Lowland League hop will be back next season with the last remaining clubs that don’t groundshare, which will be a popular entry in everyone’s fixture diary. My own busy weekend of travelling ended when Peter dropped me off back home at 7.15pm. I was cattle trucked after covering just under 1000 miles in two days, but it was well worth the effort and overall a very enjoyable weekend.