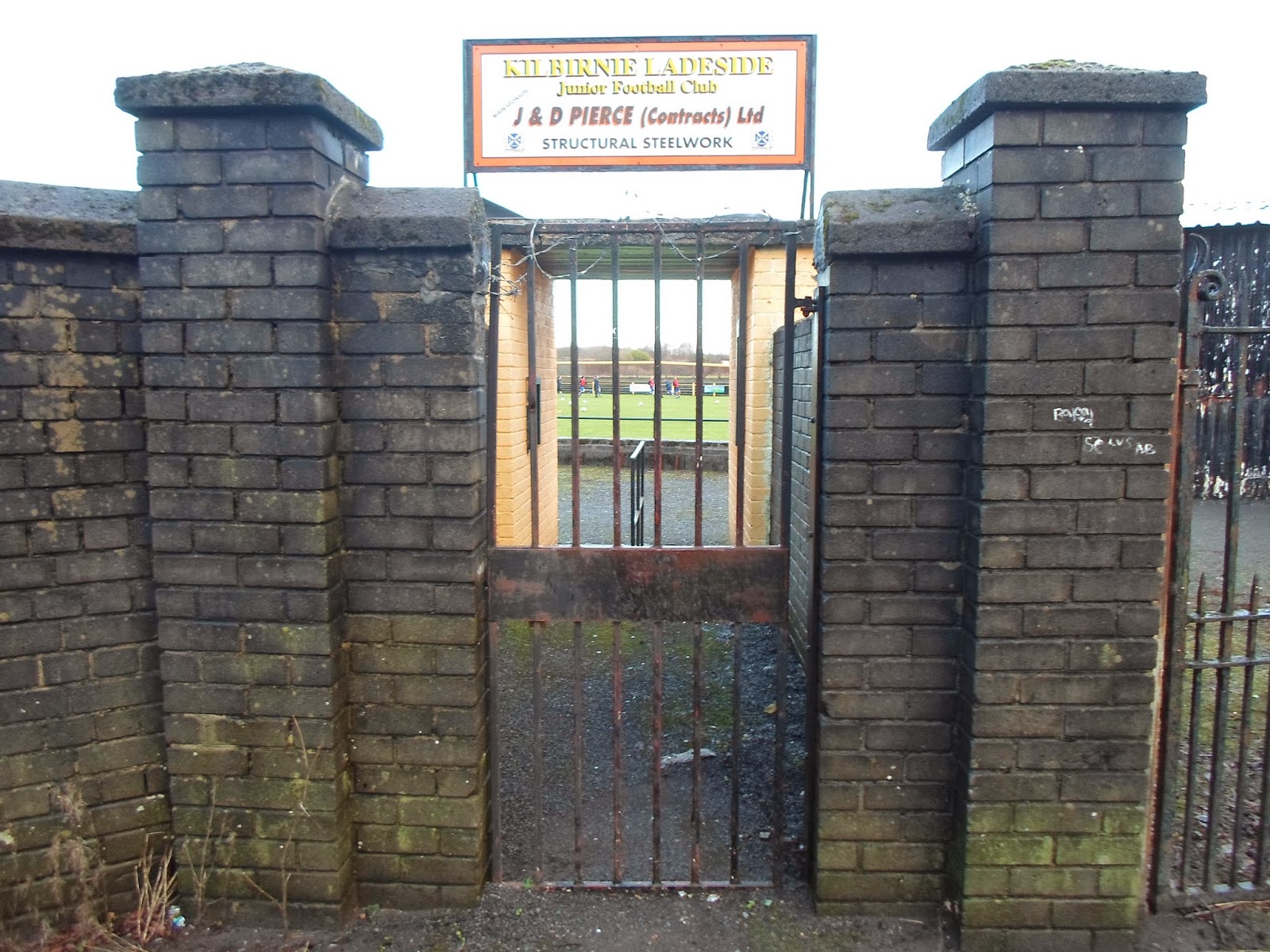 My new groundhopping project for 2015 and over the proceeding years is to visit the winners of the Scottish Junior Cup throughout my lifetime, which will add up to half a century this year. My original plan today was to visit Arthulie FC, but this like many others fell foul to the brutal Scottish weather, but thankfully my second choice of Kilbirnie Ladeside got the go ahead.

Whereabouts and Whatsabouts
Kilbirnie is a wee town situated in the Garnock Valley area of North Ayrshire, around 20 miles south-west of Glasgow and approximately 10 miles from Paisley. The town was historically  built up around the flax and weaving industries before the Glengarnock Steel Works opened its blast furnaces around 1841. Since the works closed in 1985, the area has very few local employers, making it a commuter town.The suburb of Kilbirnie in the New Zealand capital of Wellington is named after its Scottish counterpart. 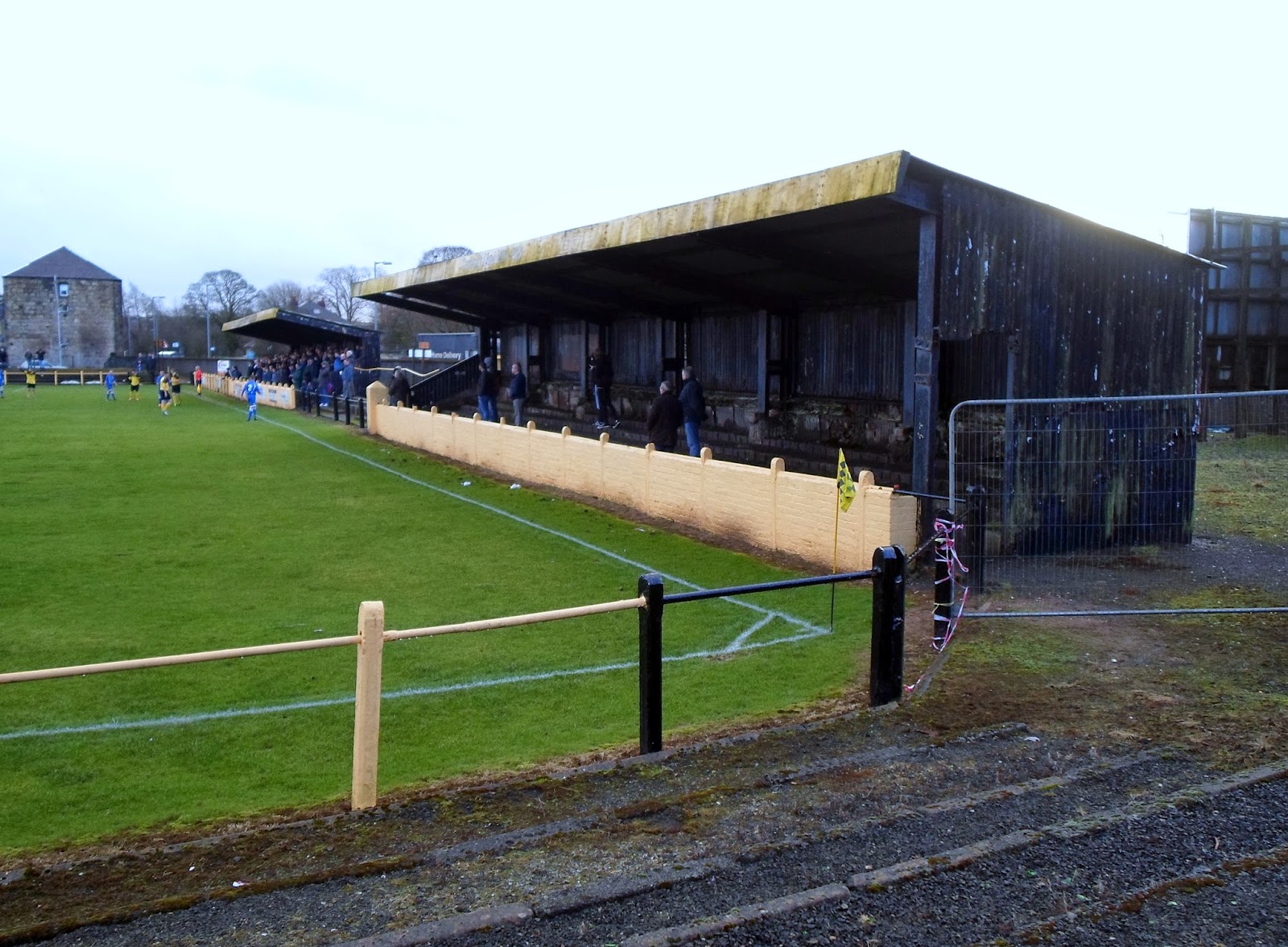 Plantpot History
Kilbirnie Ladeside formed in 1901 and are nicknamed The Blasties,  which derives not just from the steel works but from a Robert Burns poem, The Inventory, written in 1786. The poem refers to the local Saint Brennan's Day Fair, the largest horse market in the west of Scotland and his purchase of a plough horse.
My furr-ahin 's a wordy beast,
As e'er in tug or tow was traced.
The fourth's a Highland Donald hastle,
A damn'd red-wud Kilburnie blastie!

The club won their first honour in the Ayrshire District Cup in 1904, a trophy which they've won on ten occasions. Further cup success includes lifting the Ayrshire Cup eight times and winning the West of Scotland Cup in 2008. As for the holy grail of the Junior ranks, they won the cup for the first time in 1952 with a 1-0 win over Camelon, then a quarter of a century later they featured in the very first Scottish Junior Cup Final on TV (STV) when they beat Kirkintilloch Rob Roy 3-1 in the 1977 final at Hampden Park in front of a crowd of 11,476. Kilbirnie were denied the Junior Cup hat-trick in 1987 after drawing 1-1 with Auchinleck Talbot they narrowly lost the replay 1-0.
Kilbirnie Ladeside started their league career in the old Scottish Junior League, winning the title in 1903-04. They went on the win the Western/Ayrshire League five times between 1947-48 and 1975-76. They currently play in the West Super League Premier Division having won the Ayrshire District League in 2006-07 and finishing runners-up Super League First Division in 2008-09. 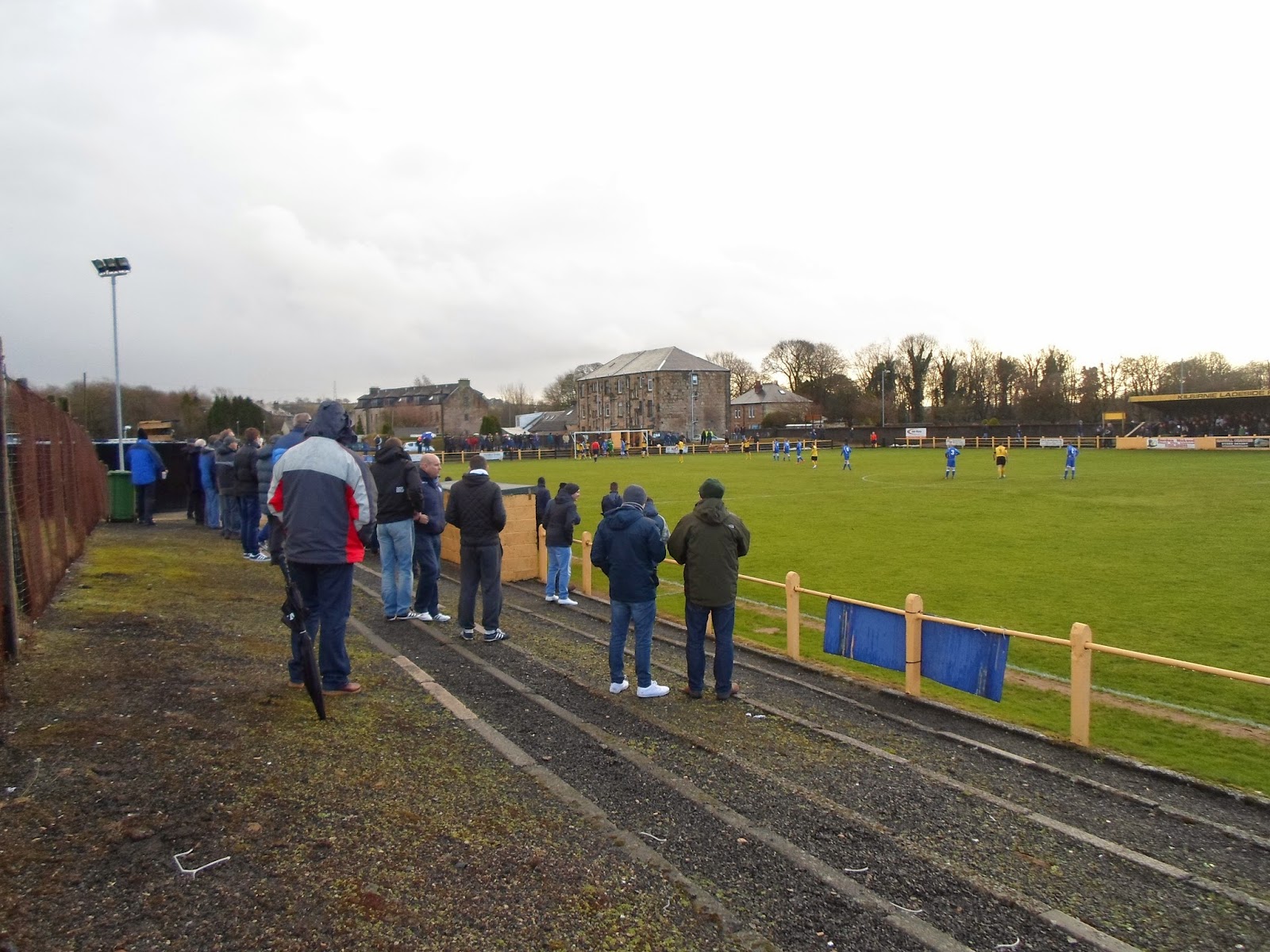 Kilbirnie Ladeside originally played at Ladeside Park on Mill Road. During World War II the army used the ground so the club relocated to Valefield. The ground had been the home of Glengarnock Vale, who vacated the ground after not reforming after the war.
The ground is found in the south end of Kilbirnie, just at the other side of Glengarnock village. The paying entrance is behind the goal, with another turnstile block off the main road which is currently out of use. There are two enclosures at the Kirkland Road side of the ground, both identical with one of the stands having a small section of wooden seat benches. There are three dugouts on the opposite side in front of the changing rooms and refreshment hall. This side also has a club office cabin and a bar incorporating a club shop which sells alcoholic refreshment in can and bottle form. The best part of Valefield (for a ground connoisseur like myself) is the terracing. At the entrance end is four large steps of terrace while at the far end the standing area sweeps around to meet the sides. The ground is nicely finished off with the stands, structures and pitch perimeter decked out in the club colours of amber and black. 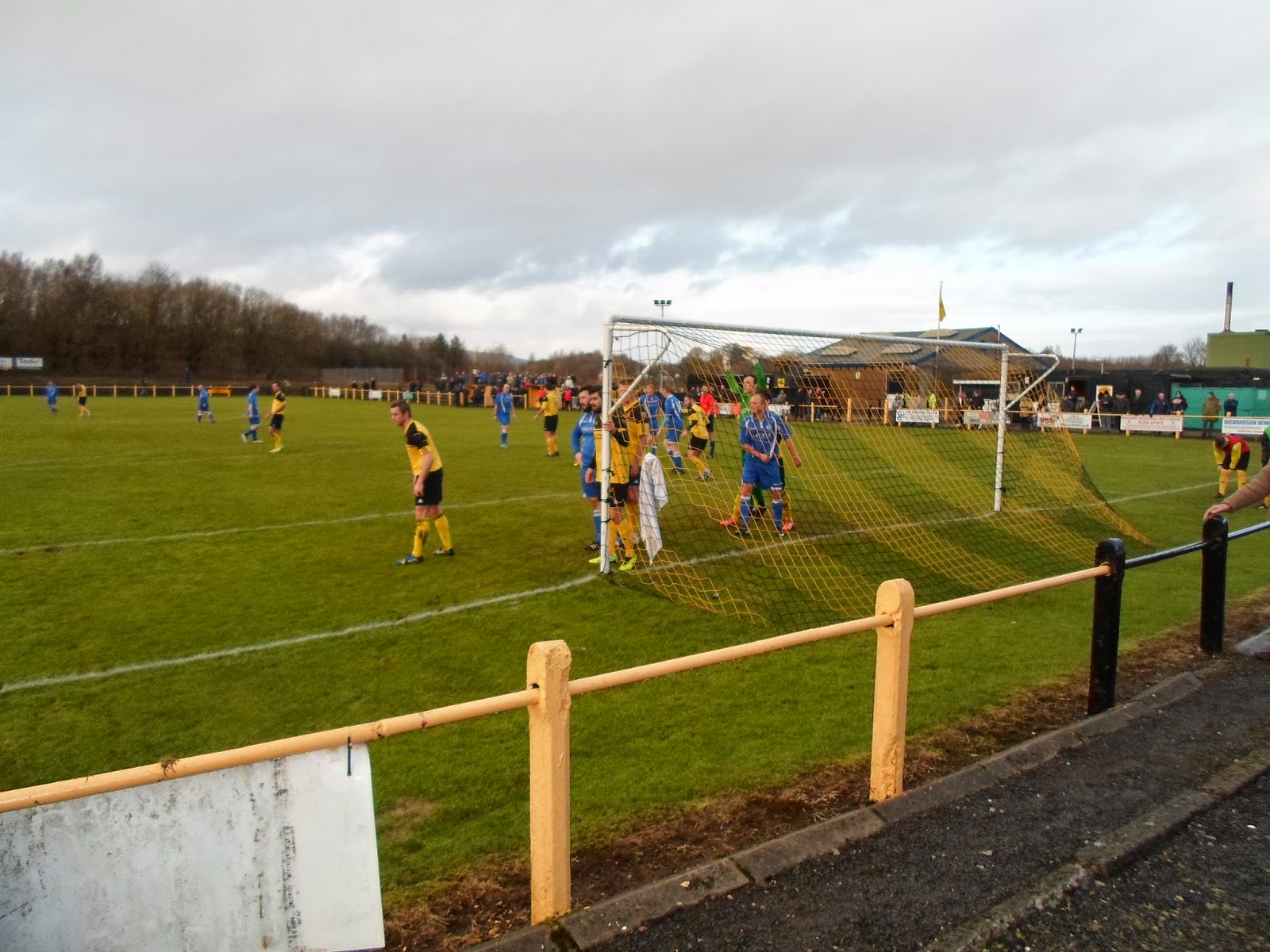 The Match
After last weekend’s total whiteout of the 16 Junior Cup ties, this match was one of only five cup games to beat the weather this week with the Vale pitch looking in great nick, considering it was still under a blanket of snow in the middle of last week.
The Blasties faced First Division side Kilsyth Rangers in a game which turned out to be a closely contested encounter, although the scoreline would suggest otherwise.
Kilbirnie took the lead after just nine minutes when Richie Barr raced onto a through ball and calmly slotted home, but the Wee Gers were level on 24 minutes when Joe Barclay received the ball on the right flank before cutting inside and firing in from a tight angle.
The match was nicely poised at this stage but two goals before half time booked Ladeside’s passage into round five. Just after the half hour mark a Wilson free kick from the right was nodded past his own ‘keeper by David Water, the goal was quite bizarre as it looked as if he had forgotten he was defending and headed home like a top striker into the far corner, giving the ‘keeper no chance.
Just before the break a long through ball found both Ryan Borris and Christopher Craig in acres of space. The linesman flagged for offside but the referee waved play on before Borris teed up his team mate up for a simple finish.
The visitors made an encouraging start to the second half and if they’d a been more clinical in front of goal they could have easily drawn level. They were made to pay for those missed chances as the hosts sealed the win when a quick break from midfield was finished off by Ryan Borris, before a late consolation from Barclay made the scoreline look a bit more respectable in a typical end-to-end cup tie.


My Matchday
This Matchday trip was split between using the car and letting the train take the strain. Engineering works on the Newcastle to Carlisle route, meant a replacement bus service from Hexham, which added an extra 40 minutes onto the journey. It was easier and a helluva lot quicker to just drive along to Carlisle myself and jump the train to Glasgow from there. I left home that morning not knowing where my final destination would be due to the bad weather in Scotland over the last week, which added to the excitement of just having a list of travel details for seven possibilities.
I parked up in Carlisle at 1025 and immediately checked my phone for messages to find out what was on and off. I received a tweet from Brian, a Kirkintilloch Rob Roy fan who informed me that his team's game at my original plan of Arthurlie was postponed. Paisley based Chris Sanderson(100FgC A38) kept me well informed throughout the morning and confirmed my main back up plan of Kilbirnie Ladeside was definitely on.
Typically, the national train provider on the west side of the country let me down yet again, giving me another kick on the bollocks with the 1047 running 35 minutes late. I don’t know if its just me being unlucky when I use them or if they're frequently so incompetent. Thankfully there's a regular service for my onward journey to Glengarnock, so I had just enough time to buy my tickets and catch the 1248 which took around 25 minutes, so nicely timed to arrive at Valefield for the 1.45 kick off.
The train delay meant I didn't have any spare time in Glasgow, which was the only downer on a cracking day, although I did have a 20 minute window on the way home to pop into Fopp on Union Street to bag a copy of the new Belle & Sebastian LP.  I shouldn't be too disappointed as there'll be plenty of other opportunities to have time for a bevvy in Glasgow as my latest groundhopping pursuit will see me becoming a regular visitor to the west of Scotland, as its the most successful region for Junior Cup winners, and Kilbirnie is just the first of many cracking grounds to come.

Footnote
All going well I’m in the process of writing a book on the winners of the Junior Cup over the last 50 years, so I’ll be writing a more thorough piece on my matchday at Kilbirnie. You can check the progress and a map of the grounds on my list on the T’Do Page 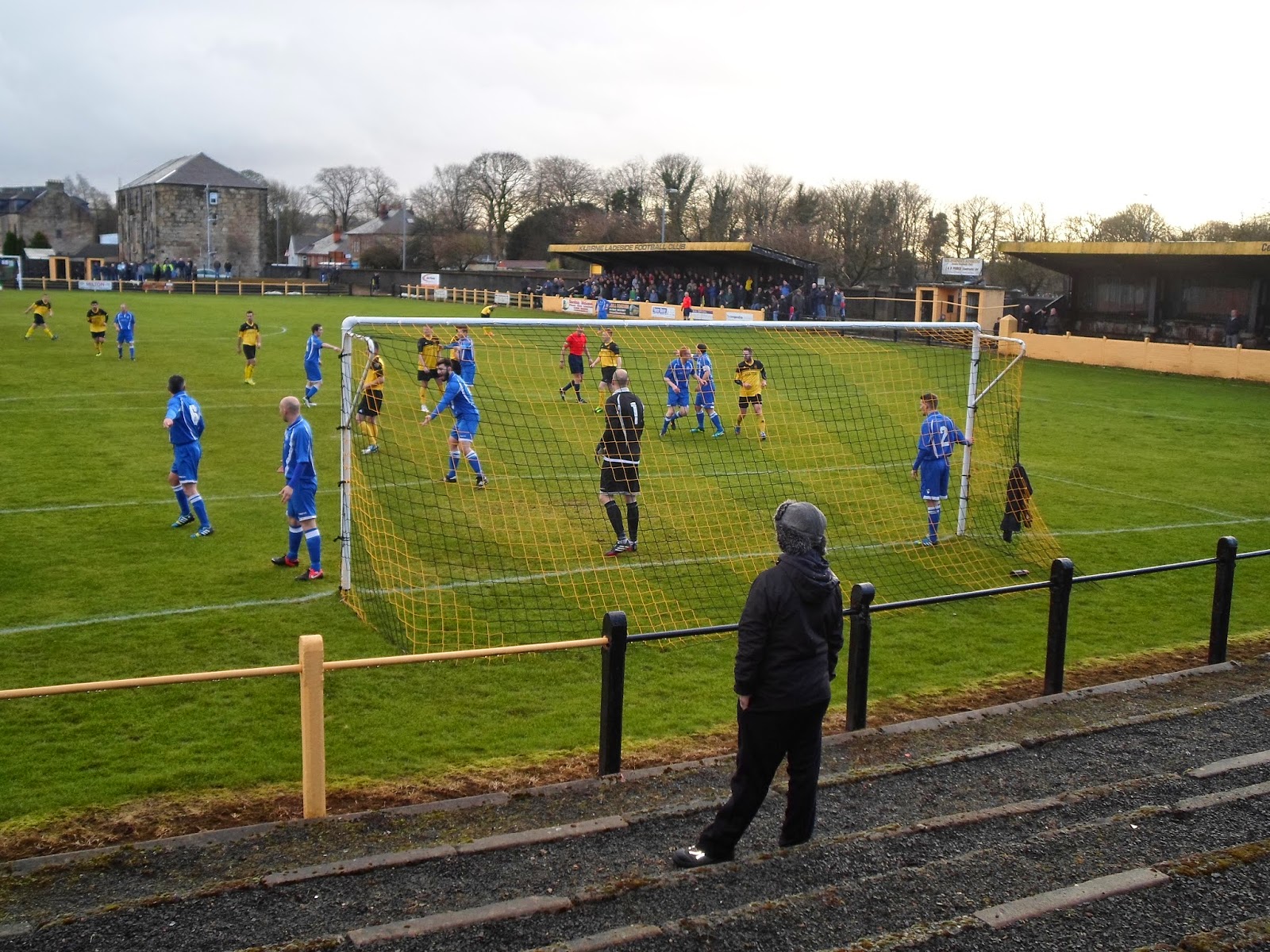