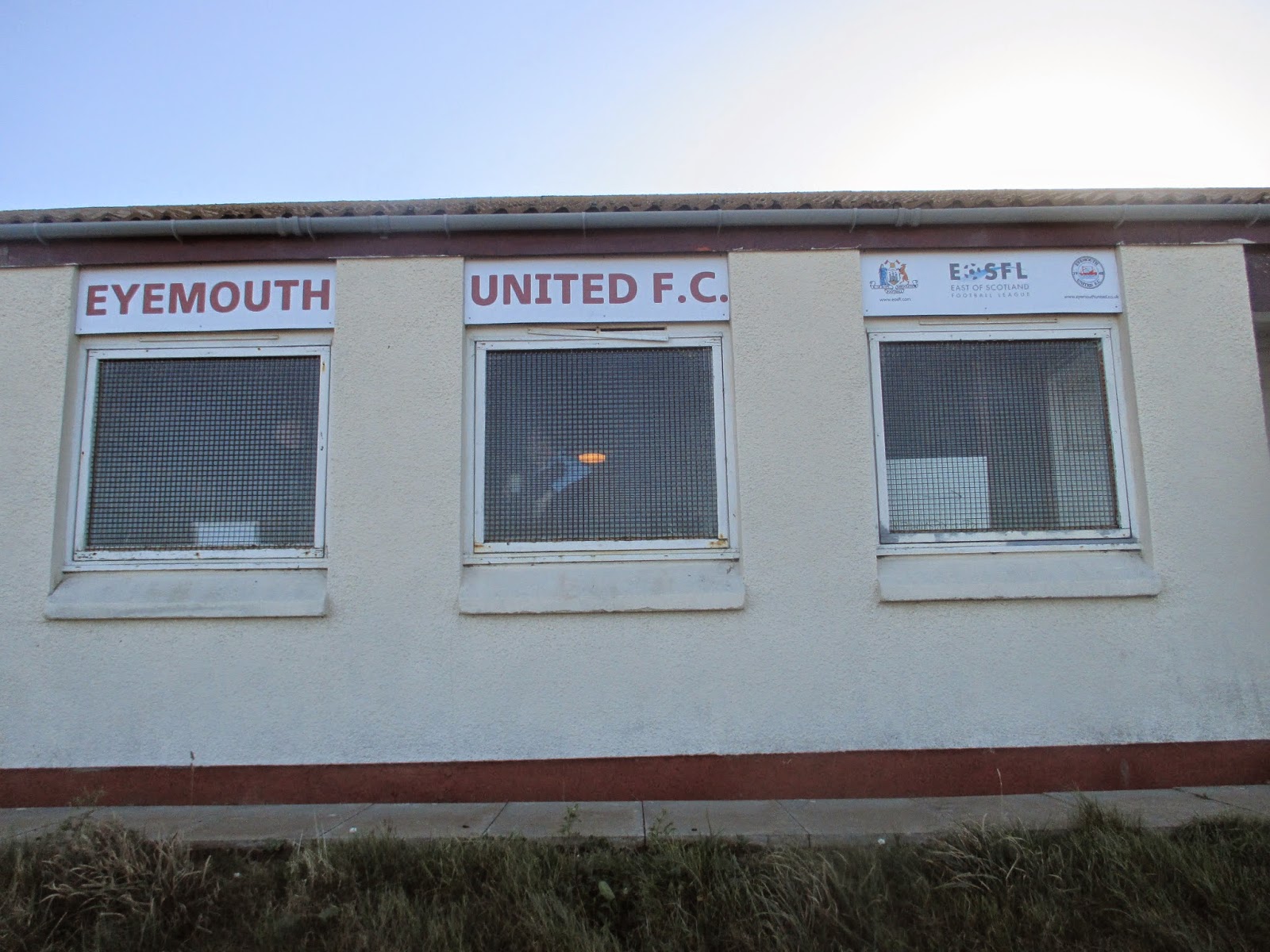 Its been a while since I’ve been to an East of Scotland League game, so I added Eyemouth United to my list of grounds to do for this season, travelling up for to the Scottish Borders for their Division One fixture with Hawick Royal Albert.

Eyemouth (Scots: Heymooth) is a small town and civil parish in Berwickshire,  just 8 miles north of Berwick-upon-Tweed. The fishing ports name derives from its location at the mouth of the Eye, with many of the features of a traditional fishing village preserved within its narrow streets and vennels, giving shelter from the sea and well suited to the smuggling tradition of old. The small villages of Ayton, Reston, St. Abbs, Coldingham, and Burnmouth are close by and the Scottish border coast offers opportunities for birdwatching, walking, fishing and diving.
There are still traces of the first Trace Italienne style fortification in Britain, built at a cost of £1,906 at Fort Point, Eyemouth in 1547. It was demolished under the Treaty of Boulogne in 1550, but rebuilt again six years later by d'Oisel. The fort held it held 500 French troops and it was demolished again under the Treaty of Cateau-Cambresis in 1559. 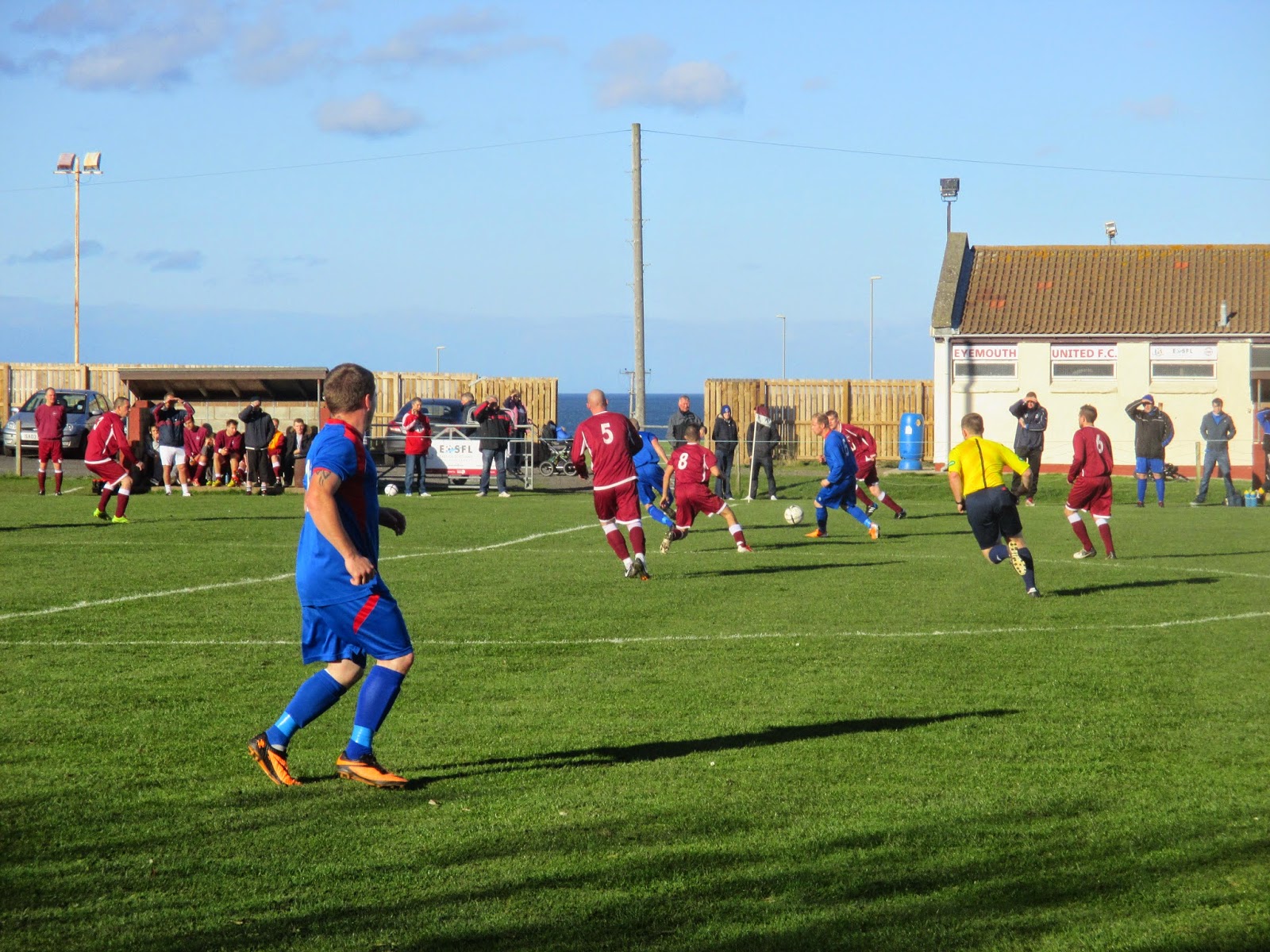 Eyemouth United F.C. were founded in 1949 and as members of the Scottish FA played in the Scottish Cup. In 1953 a crowd of over 4,000 saw The Fishermen take on Celtic and their most successful run in the cup came in 1959-60, when they reached the quarter-finals, losing 2-1 at home to eventual finalists Kilmarnock. The club currently play in the East of Scotland League and have won many honours but mostly back in the 1950’s. They were league champions three times during the decade and last won the title for the fourth time in 1970-71. They also adding three Scottish Qualifying Cup South wins, two City Cups amongst other honours during their heyday. The East of Scotland Qualifying Cup was also lifted four times during the 50’s and this was the last honour they’ve won back in the 1971-72 season 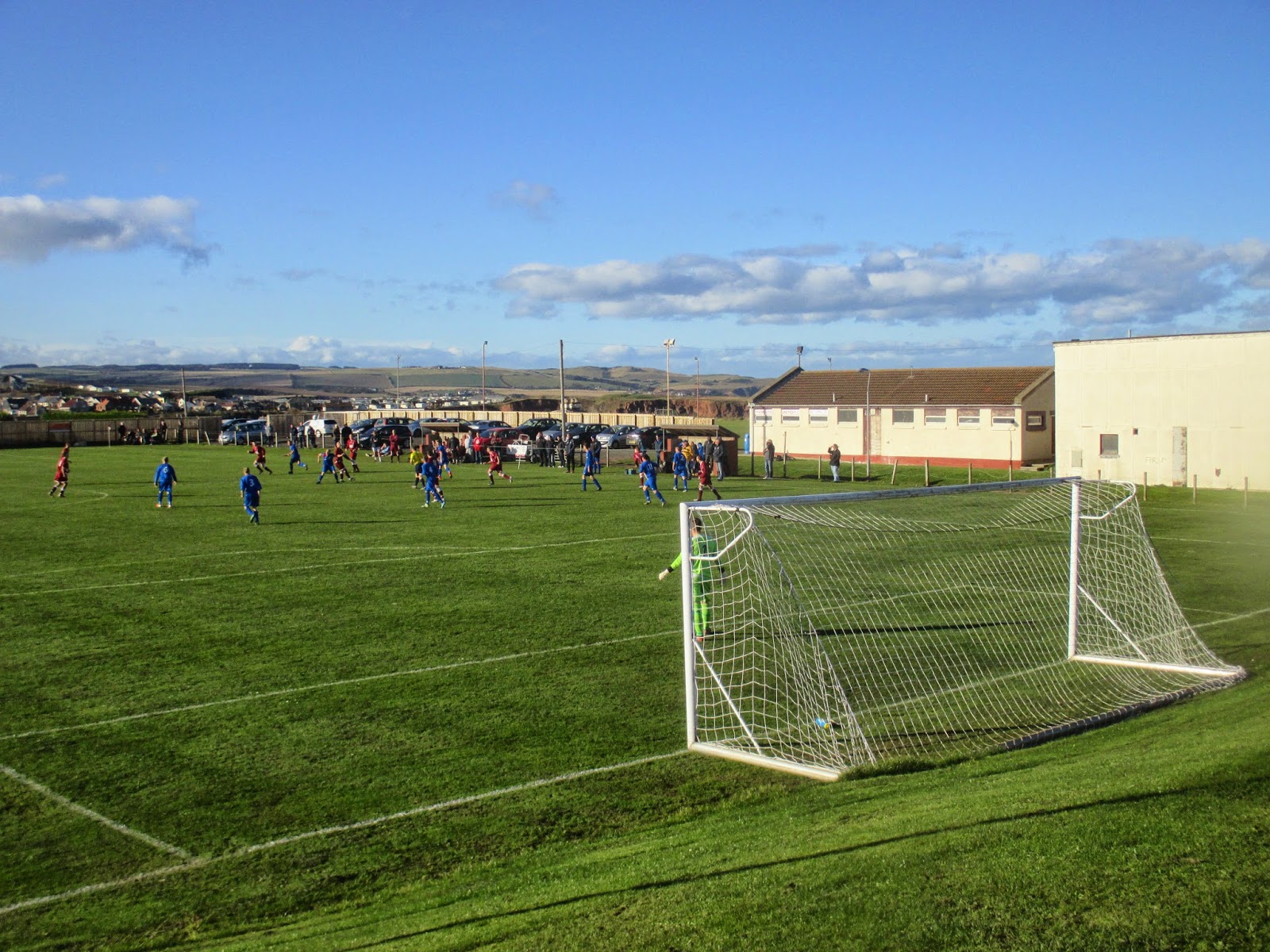 Originally known as Gunsgreen Park until it was renamed Warner Park at the turn of the millenium, the ground is found over the other side of the harbour from the town centre. From there you navigate a steep hill so the ground is quite elevated and exposed, with panoramic views of the North Sea. The ground has quite basic with a pair of brick dugouts and a wooden fence has been recently added to make it more enclosed. The changing room block has a cafe which serves proper mugs of coffee served by the same bloke who runs the line during the match. 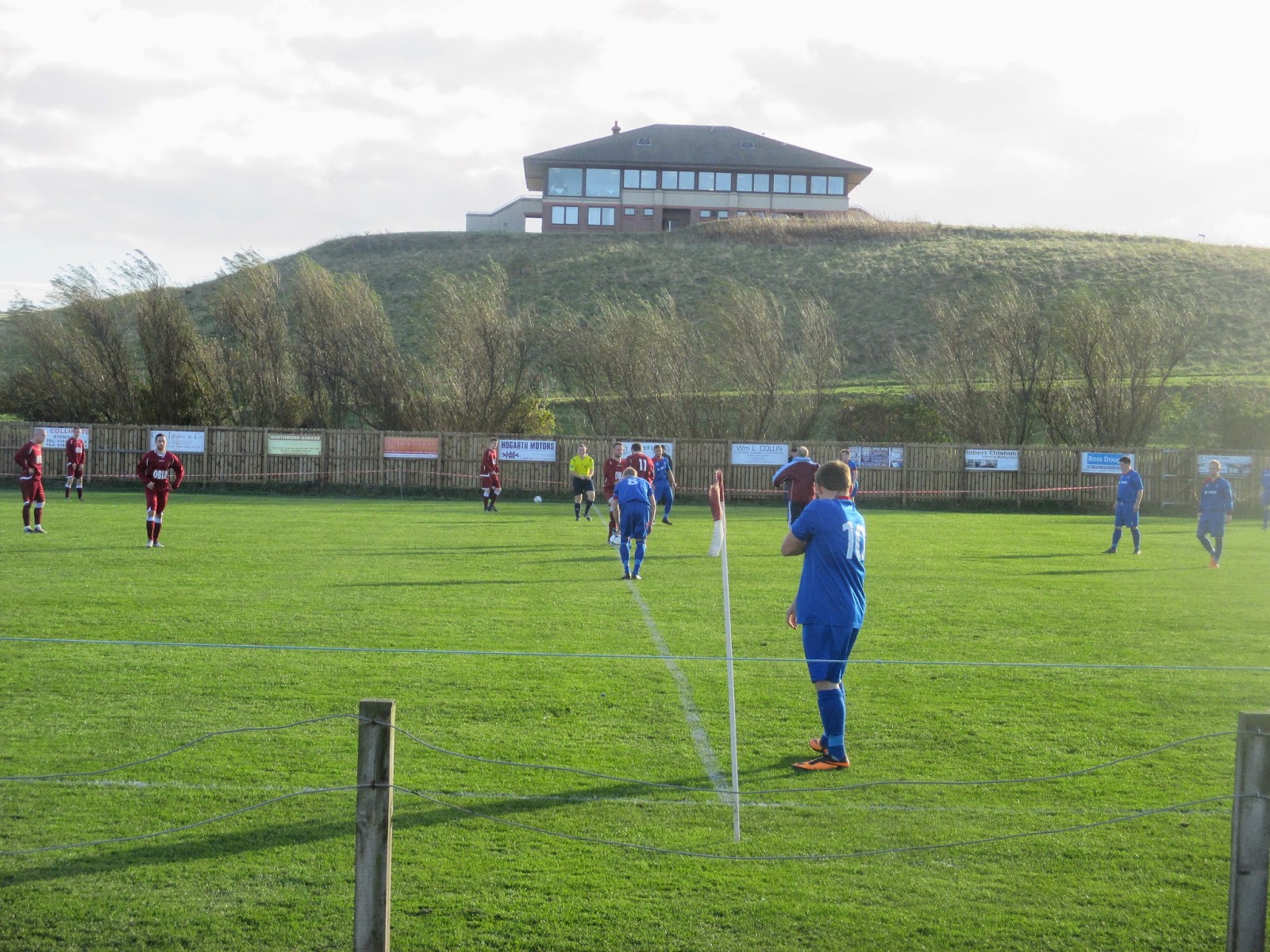 The Match
What a cracking game, nine goals, plenty of missed chances and a full scale scrap! The Fishermen took the lead after only two minutes when Scott Adamson fired in after the defence failed to deal with a corner, but they responded well, with McSherrin firing in a 20 yard daisy cutter to draw level. Two minutes later Eyemouth regained the advantage with a well placed shot from Buckley from outside the box, then Gavin Burrell made it three on 35 minutes, celebrating his good finish with a lot of screaming and a dodgy somersault.

From this point it looked like the hosts would go on and comfortably win the game, but Hawick hit two goals in a minute before half time. Andrew Noble finish off some neat play firing home a left wing pass, followed by a well placed free kick by Gordon Ramsay from the edge of the box, placed perfectly into the corner of the net.

On the hour mark all hell broke lose when two opposing players game to blows, wrestling on the pitch like a couple of schoolkids after arranging a barney. Within seconds it became a pile on as players from both sides tried to break it up and once the referee finally calmed things down he showed a red card to Hawick midfielder Gordon Ramsey. He left the field by hurling a mouthful of abuse, akin to his TV chef namesake, which was a shame because he had played well throughout.

The visitors responded well to being reduced to ten men by taking the lead for the first time when Greg Summers nipped in between the defenders to make it 3-4 on 68 minutes, but again two strikes in the space of minute won it for Eyemouth. Adamson got his second of the afternoon on 82 minutes, getting on the end of right wing cross from Alan Jess, then the creator scored the winner, slamming home a ball from the left to round off an incredible action packed afternoon. 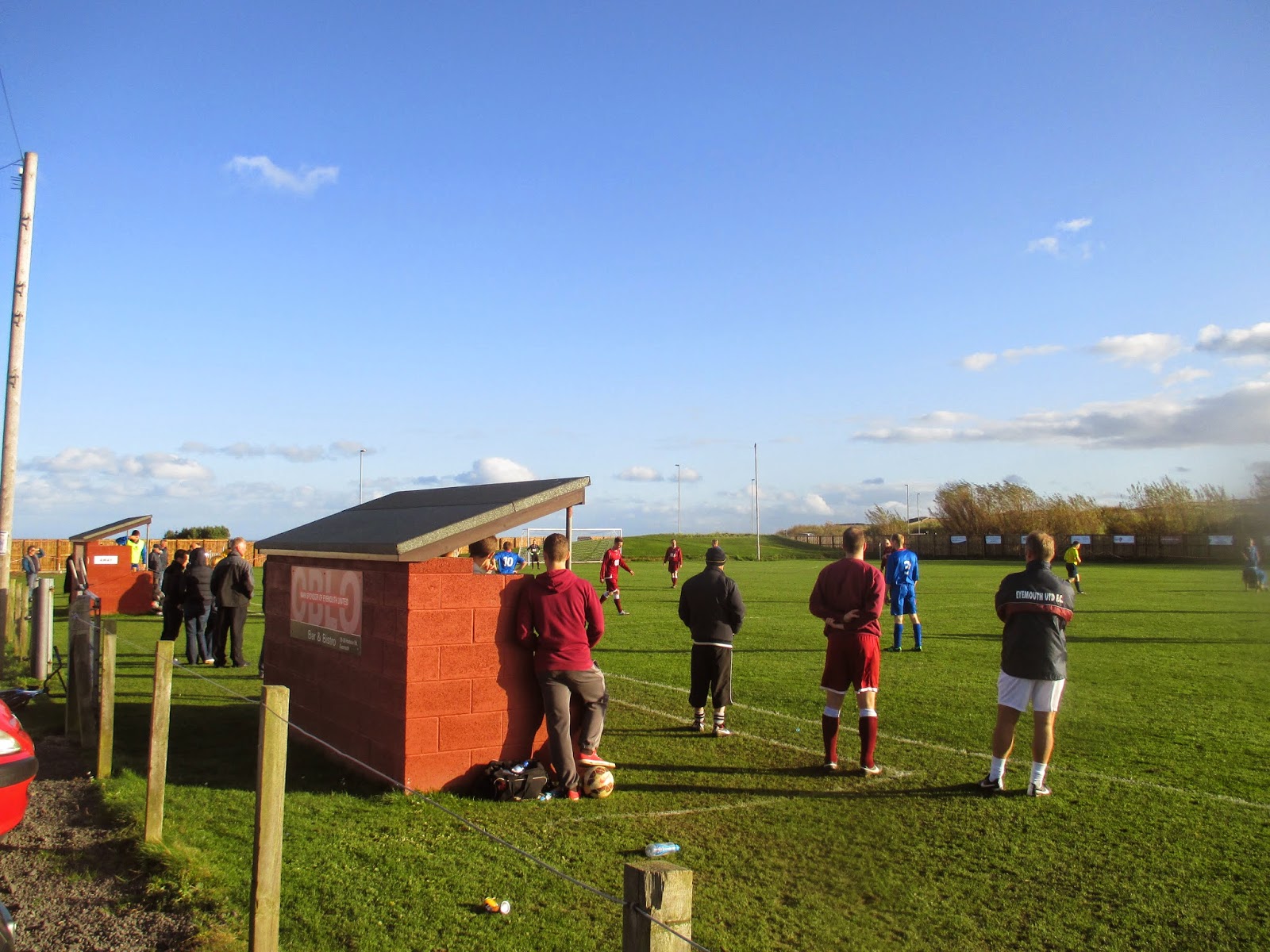 My Matchday
This was the second consecutive Saturday that I travelled up to Berwick on the train. Last week me, Zippy, Plymouth Pete, Jimmy Jimmy and Honest Paul had a day out on the lash in the town, and also took in the Borders fixture with Elgin City. After a very enjoyable day we arrived back at the train station in plenty of time but somehow contrived to miss the last train home. The fact that there’s only two platforms at Berwick station makes this misdemeanour more laughable, and although we were giving the wrong information we never should’ve missed it, but in our defence we were very……..very......drunk!

This week I boarded the 1255 train then a walk to the bus stop for the 253 service to Eyemouth, however this stroll ended up being a run as the train was eight minutes late, but I got to the Chapel Street stop in time, so I arrived in Eyemouth twenty minutes before the 2.30 kick off.
Afterwards I had a look around the town which was described as a mini-Whitby by Stevie Charla, who is our resident Alan Whicker at the Valley D.O. The town was very quiet and everywhere seemed to be closed, but I found a pub called The Tavern next to the bus stop where I supped a nice pint of Tartan Special. I had a quick bevvy in Berwick and had no problems catching the train back to Newcastle this time, unlike last week having to fork out for a whip round of a hundred quid for someone to come and rescue us.  Overall a pleasant little trip and if you haven’t visited the fishing port of Eyemouth and Warner Park I highly recommend it.