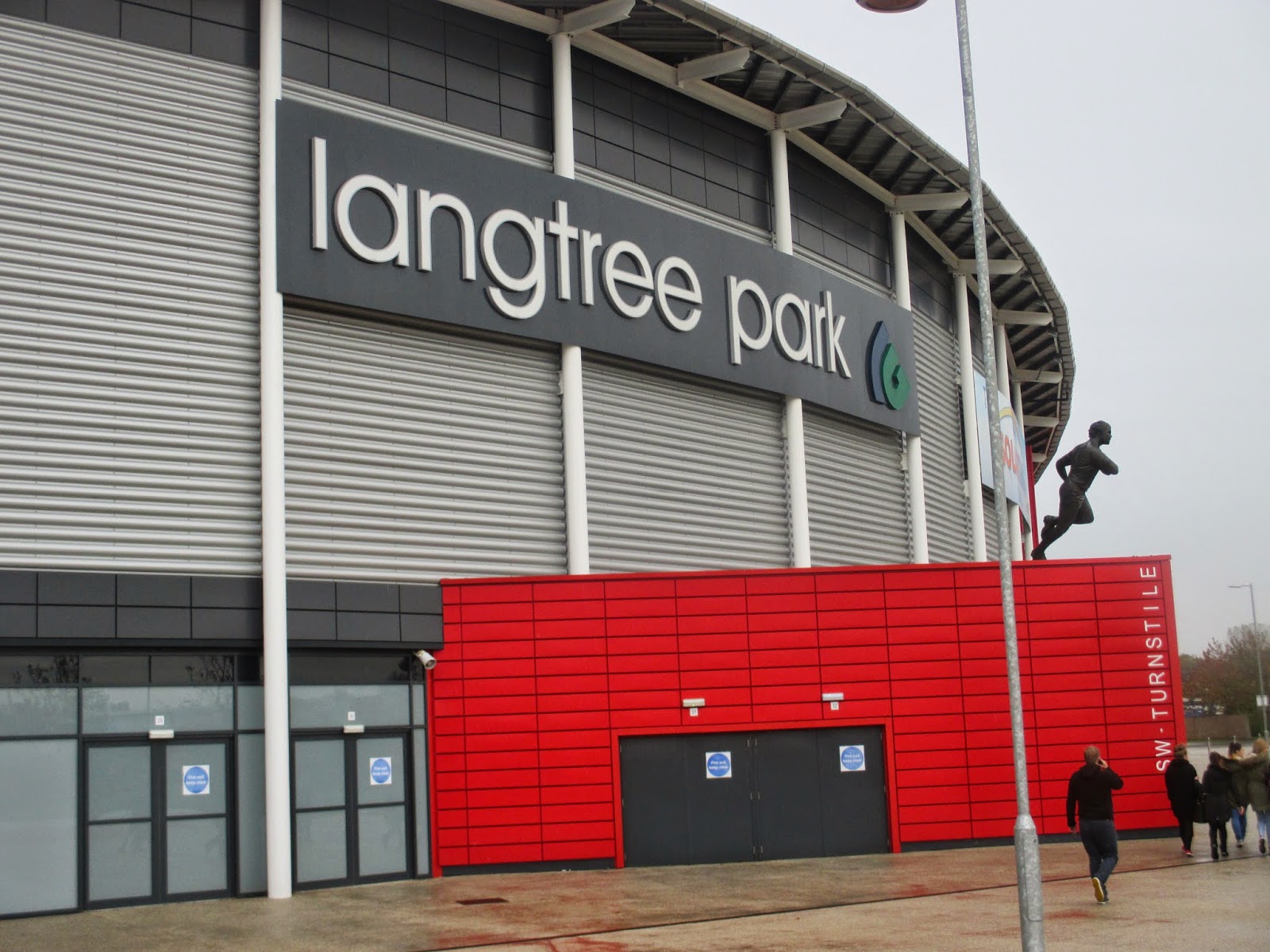 I’ve been bragging for weeks that I was heading to Merseyside for Liverpool v Real Madrid until having to confess it’s actually not the UEFA Champions League, but the youth equivalent played at Langtree Park rugby league stadium at St Helens.


The  UEFA Youth League was launched last season with games played at a group stage, reflecting the same matchday schedule as the 2013–14 UEFA Champions League group stage. The tournament  was held on a 'trial basis' with the eight group-winners and runners-up participated in a knockout phase, with single-leg ties and the semi-finals and final played at neutral venues. Barcelona became the first champion, beating Benfica 3–0 in the final-four held in Nyon.
After a two-year trial period, the UEFA Youth League will become a permanent UEFA competition starting from next season, with the tournament expanded from 32 to 64 teams to allow the youth domestic champions of the top 32 associations according to their UEFA country coefficients to also participate. 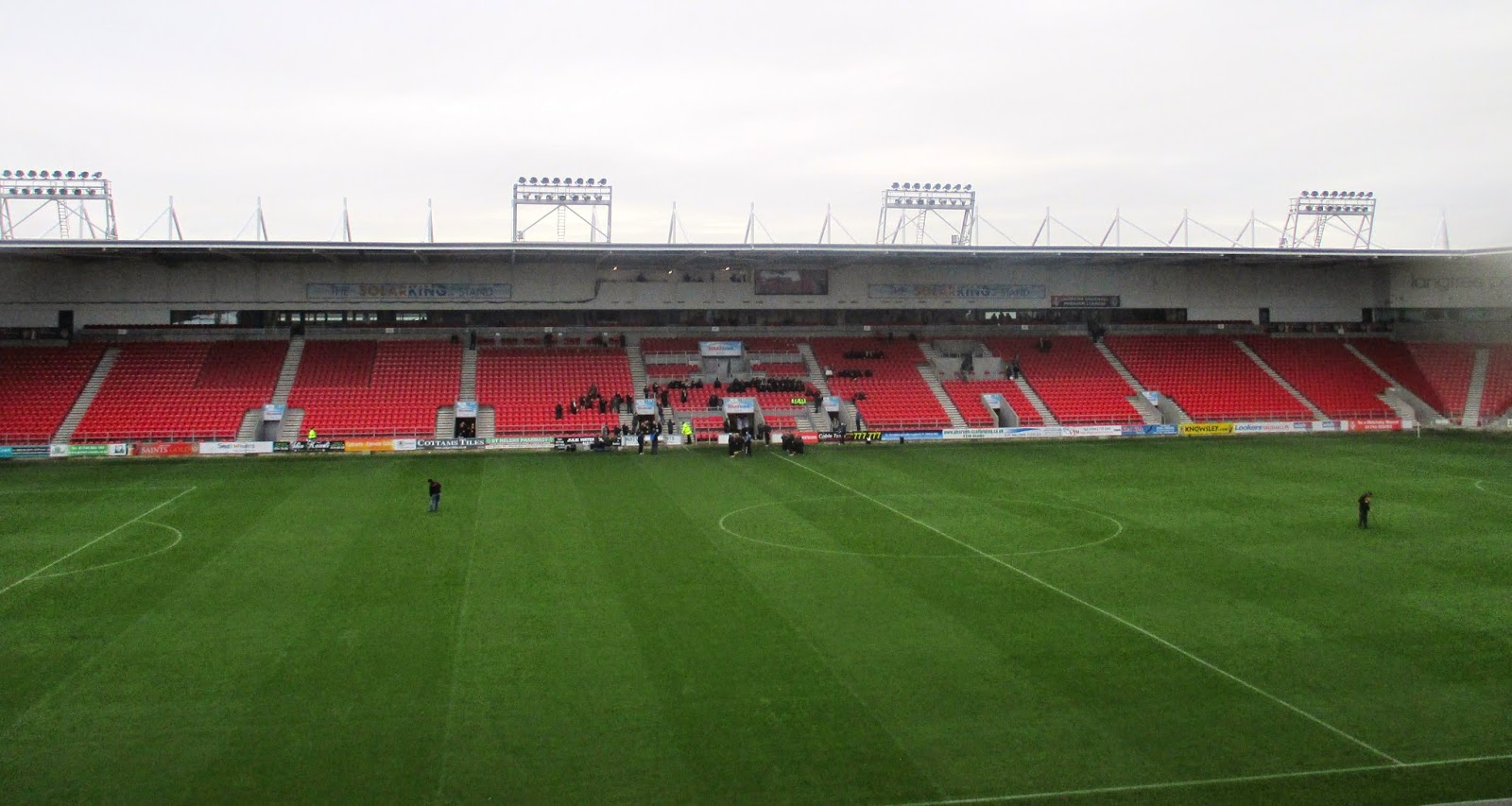 Whereabouts and Whatsabouts
St Helens is a large town and metropolitan borough in Merseyside, found 11 miles east of Liverpool and 23 miles from Manchester city centre.
The origin of the name "St Helens" stems from a "chapel of ease" dedicated to St Elyn, with the earliest recorded documented referenced in 1552. Between 1629 and 1839 St Helens grew from a small collection of houses surrounding an old chapel to a village, before becoming an important urban centre of the four primary Manors and surrounding townships.
St Helens did not exist as a town in its own right until the middle of the 19th century. During the Industrial Revolution St Helens became a significant centre for glassmaking, coal mining and historically it was also home to a cotton and linen industry, most notably in sail making. Today, St Helens is a commercial town and an ideal commuter location, as it shares borders with the towns or boroughs of Prescot in Knowsley, Skelmersdale, Warrington, Widnes, Wigan, and has direct transport links by road and two main railway lines. 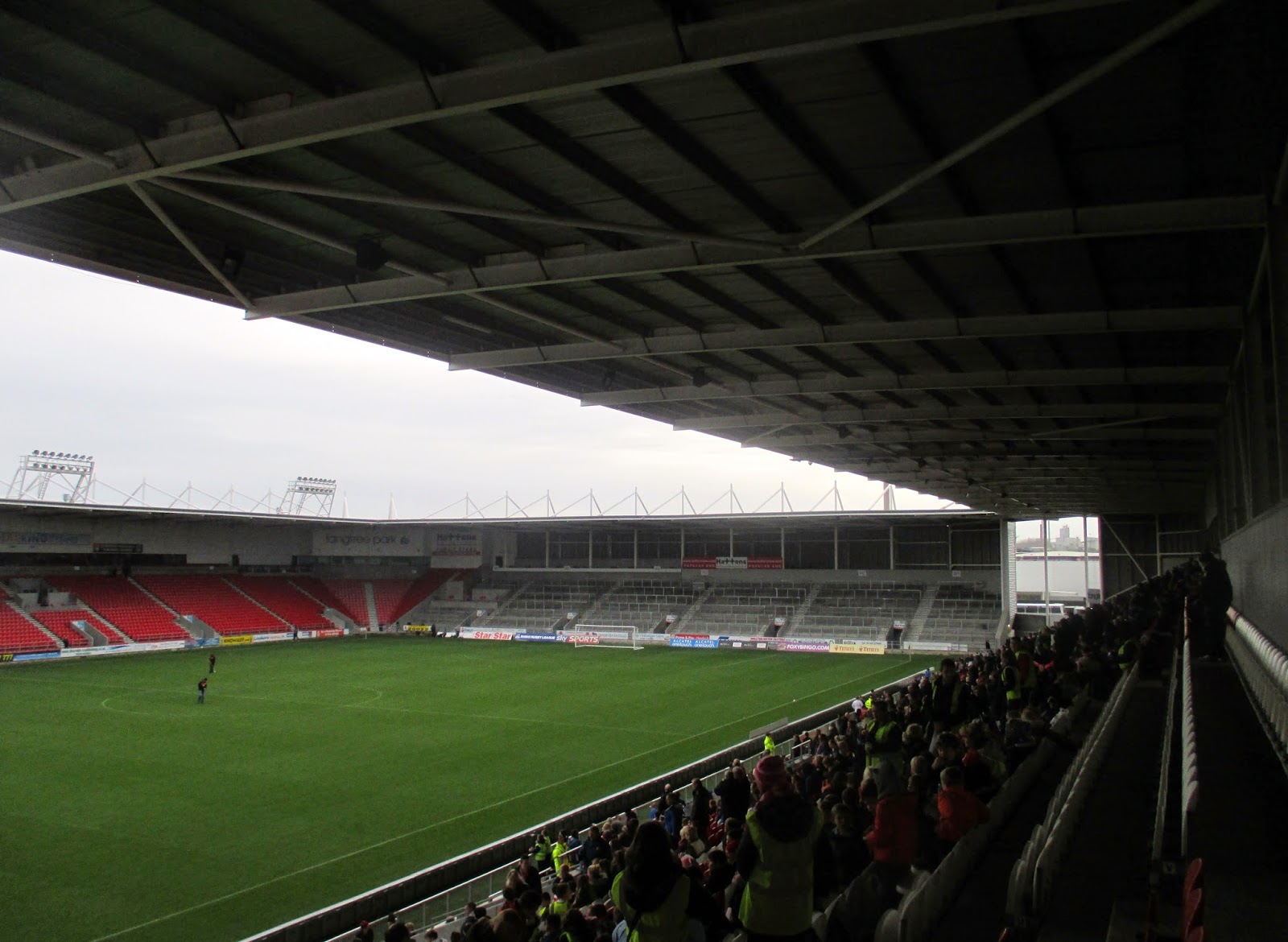 Ground no.420 Langtree Park
Langtree Park  is home to St Helens RLFC, located in the Peasley Cross area of the town. The club played at their former home at Knowsley Road in Eccleston for 120 years until the ground closed in 2010. The new stadium was built on the land formerly occupied by the UGB Glass plant with construction beginning in August 2010 and completed in November 2011, one month after the neighbouring Tesco store, which was also part of the redevelopment scheme was finished. The Langtree Group, the primary developers in the project gained the naming rights, with the first Super League fixture taking place on Friday 20th January 2011 as St Helens beat Widnes in the stadium opener.
Langtree Park has a capacity of just under 18,000 made up of two main standing areas totally 7,695 and seated stands at each side.  The main stand is on the south side having a capacity of 5,233, with executive boxes, disabled seats and houses the club shop, bar and ticket offices. The North Stand is slightly smaller with a capacity of 4,718, with both stands decked out in red with white lettering and have the floodlights perched on the roofs. There are standing terracing behind both goals totalling 7,695 with a small section of seating meeting the main stand in the corners. The overall capacity is just under 18,000 with 10,150 seats. 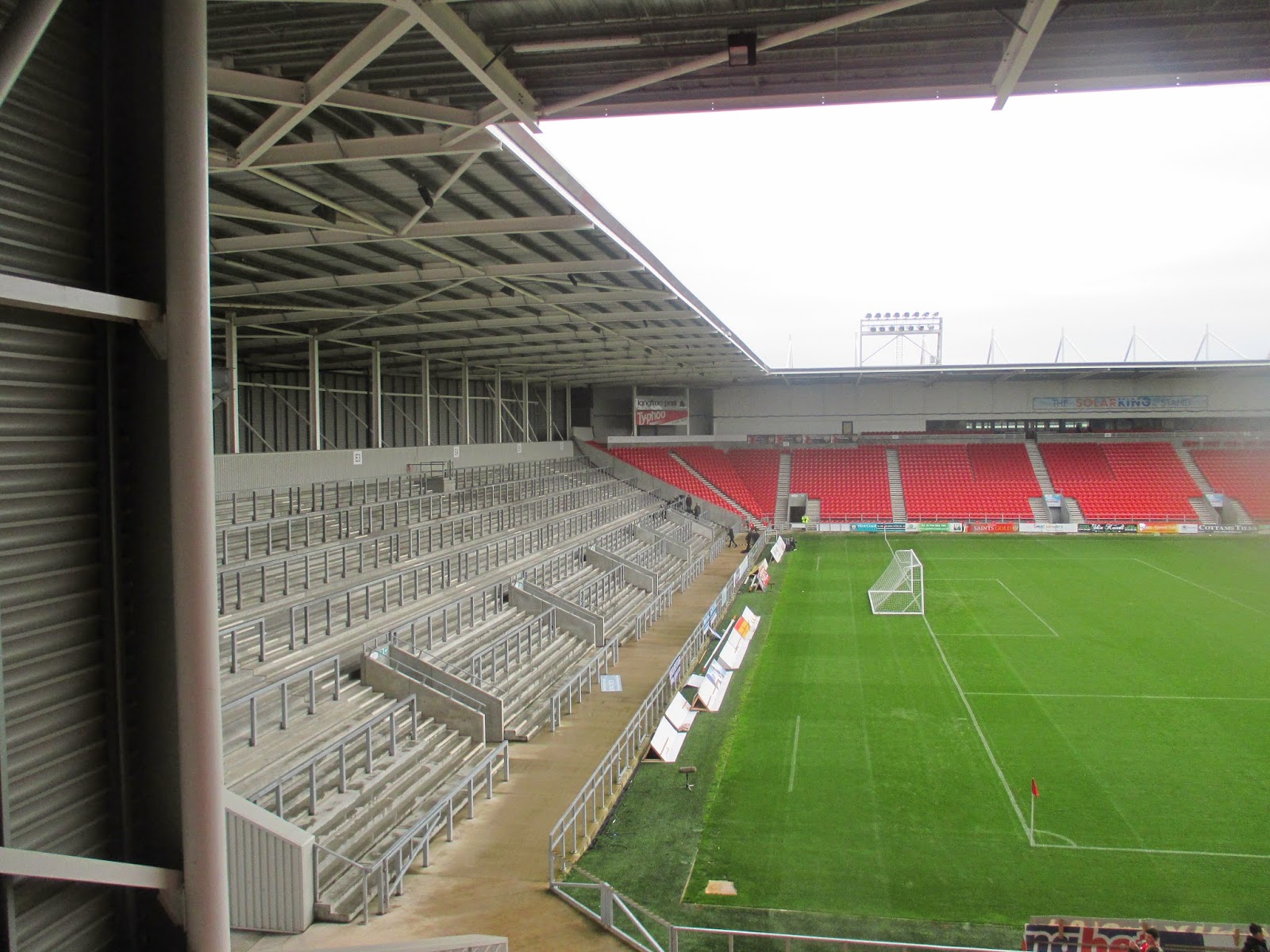 The match was a cracker played to the soundtrack of screaming school kids who made up a large majority of the crowd. I wish these sort of fixtures took place when I was a bairn, it would have been fab to spend an afternoon out of the classroom at the match instead of the swimming baths or some boring museum.
The young Liverpool support were soon in full voice as the reds took a two goal lead after 20 minutes. Cameron Brannagan fired in after a keystone kops type scramble, then five minutes later Tom Brewitt netted the rebound after a Wilson free kick was saved.
Real finished the half strongly and missed a golden opportunity when they were awarded a penalty after a high foot challenge by Phillips on Cedre. Borja Mayoral stepped up to take it but as he was about to shoot he slipped and fell on his backside, so the ball flew high over the crossbar...a regular sight here at the home of the egg shaped ball.
The Spaniards made up for that mishap in the second period by drawing level, with defender Lienhart nodding in a right wing cross on 53 minutes followed by Borja Sanchez playing a lovely one-two before placing his shot in off the far post with 66 on the clock. The goals were greeted with youthful cheers, with screams just as loud as the Liverpool goals, as the young Evertonians in the crowd were adopted Real Madrid supporters for the day.
In the later stages both team pushed for the decisive winning goal and it was Liverpool who clinched it when Sinclair found Harry Wilson in space who fired his right foot shot into the far corner. An excellent game played in good spirit with an array of talent on show, some of which could become household names within a few years. 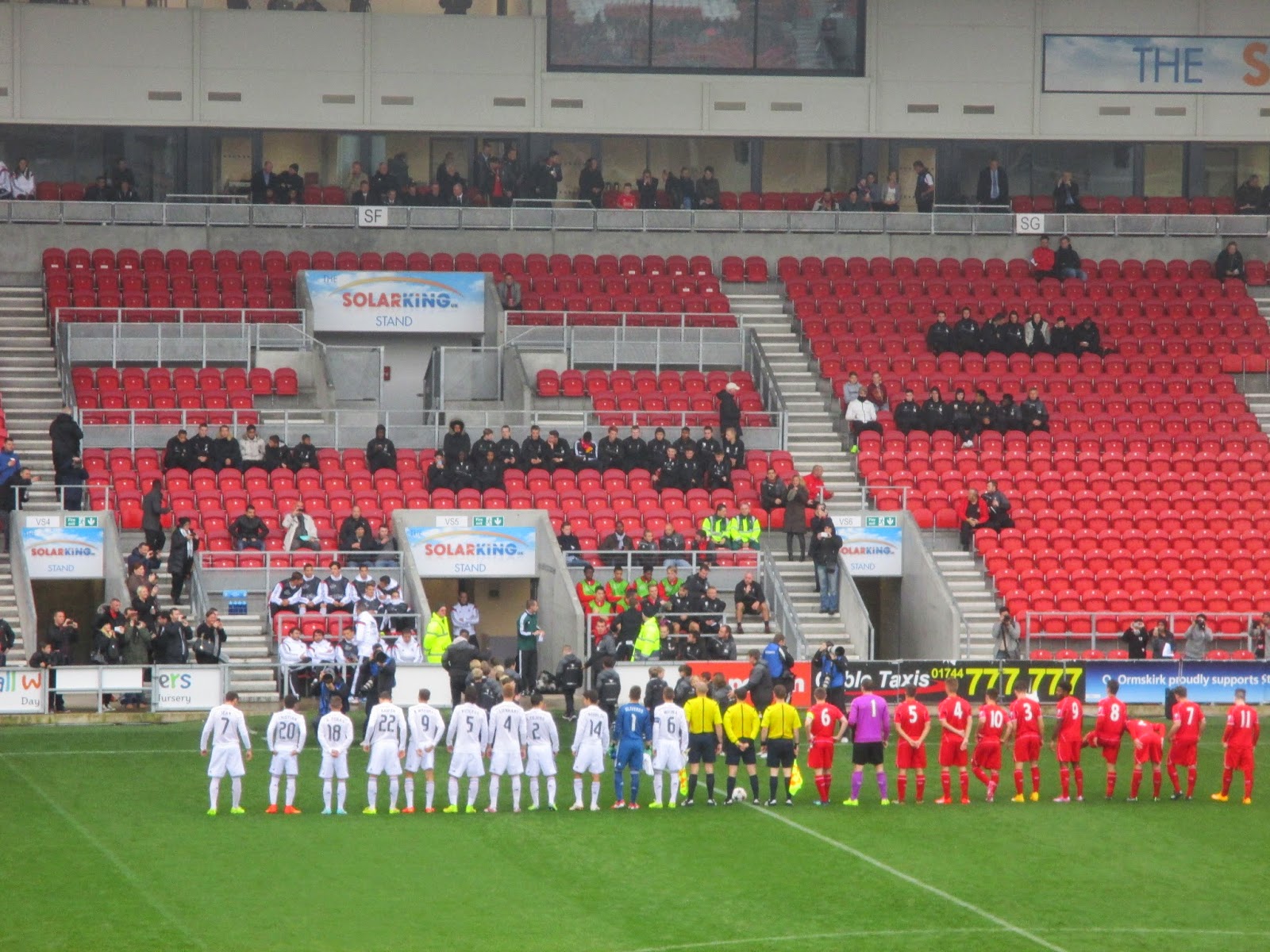 My Matchday
Its a good job that the match was excellent, the beer decent and the stadium extremely nice...as my day of travelling was a pile of dog shite! I left Newcastle on the 0924 Northern rattler which arrived in Carlisle(as always)spot on time. From the Border City I was heading down to Preston, booked on the scheduled 1110 to London Euston, which eventually arrived twelve minutes late. I had a 16 minute window at Preston before catching the connection to St Helens, so I thought the four spare minutes was sufficient enough to make it, but by the time we arrived the train was 21 minutes late, which was hard to comprehend considering it only stopped once at Penrith. I only had one option if I was going to make the 2pm kick off and that was to stay on the train and alight at Wigan North Western, hoping it gets there before the St Helens train.(I hope your following this)
It reached Wigan with a minute to spare, but I needn't have worried it was also running late, so after a stressful morning I was delighted to arrive in St Helens at quarter past one, only ten minutes behind schedule.

There are two JDW'Spoons pubs in the town, so I went to both, calling at the Running Horses before the match and The Glass Works afterwards. In the pub I received a phone call from 100FgC Squad#187 Alan Oliver apologising for not being able to meet up with me for the game. I told him about the journey and mentioned that it hopefully wouldn't be as bad heading back home.....well..
..The train from St Helens obviously arrived late into Preston, then I was flabbergasted to discover my 1741 was cancelled. I was told by a member of staff to catch the 1758 instead, but..aye, you guessed it...that was running at least ten minutes late. There was a Virgin train to Edinburgh due which called at Carlisle so I jumped aboard, and at long last I felt I would get to hold my loving breadknife in my arms and cuddle into her warm bosom before the day was out.
For a change the train made good time so I had a good 20 minutes spare in Carlisle to nip into The William Rufus and cross off a couple of more ales in the Wetherspoons Beer Festival bingo. I caught the 1938 back to Newcastle so I was home at my intended time, so I shouldn't really complain about the transport because if this match took place 24 hours earlier in the atrocious weather I’d more than likely would have never made it there or back. 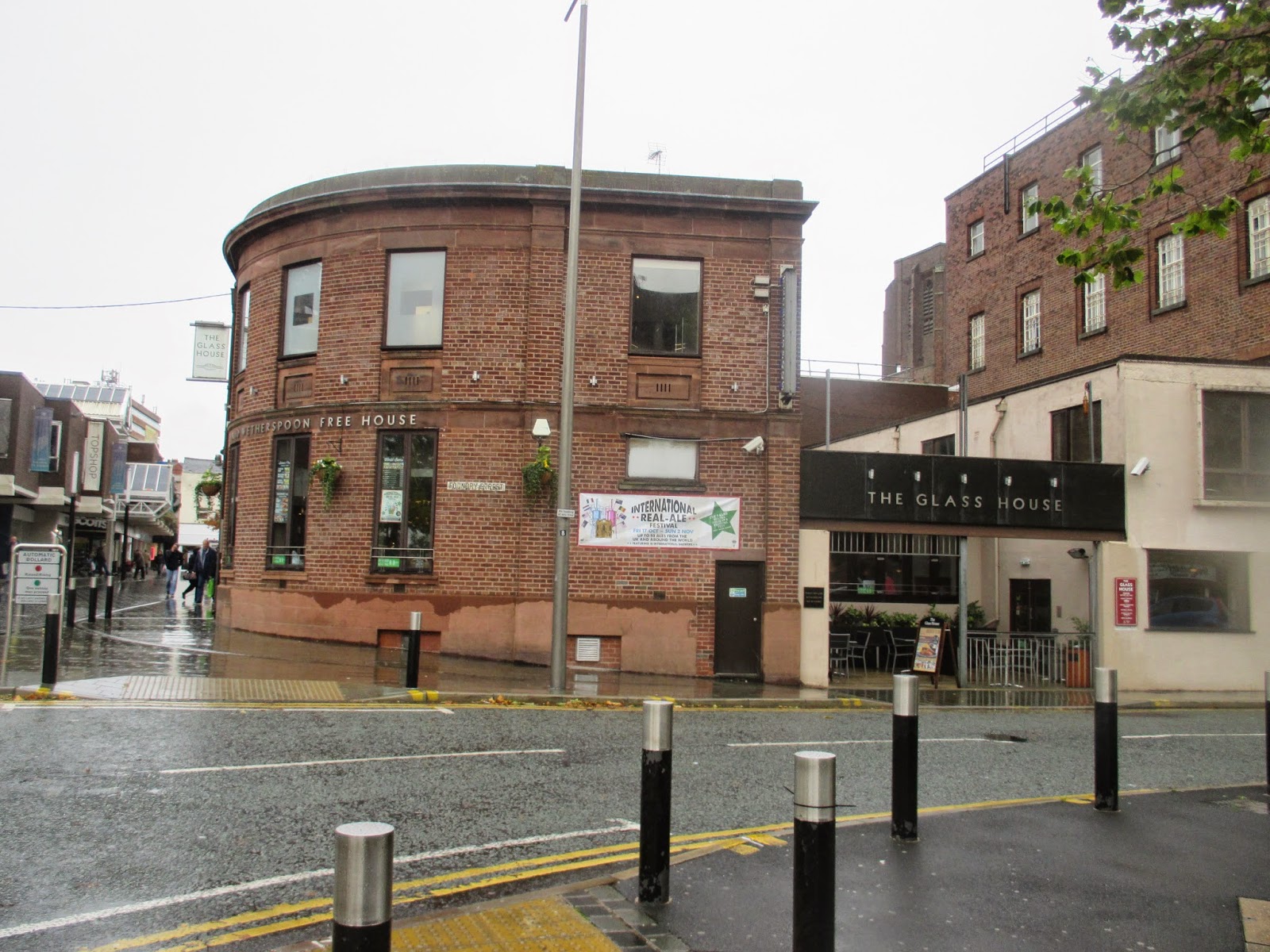