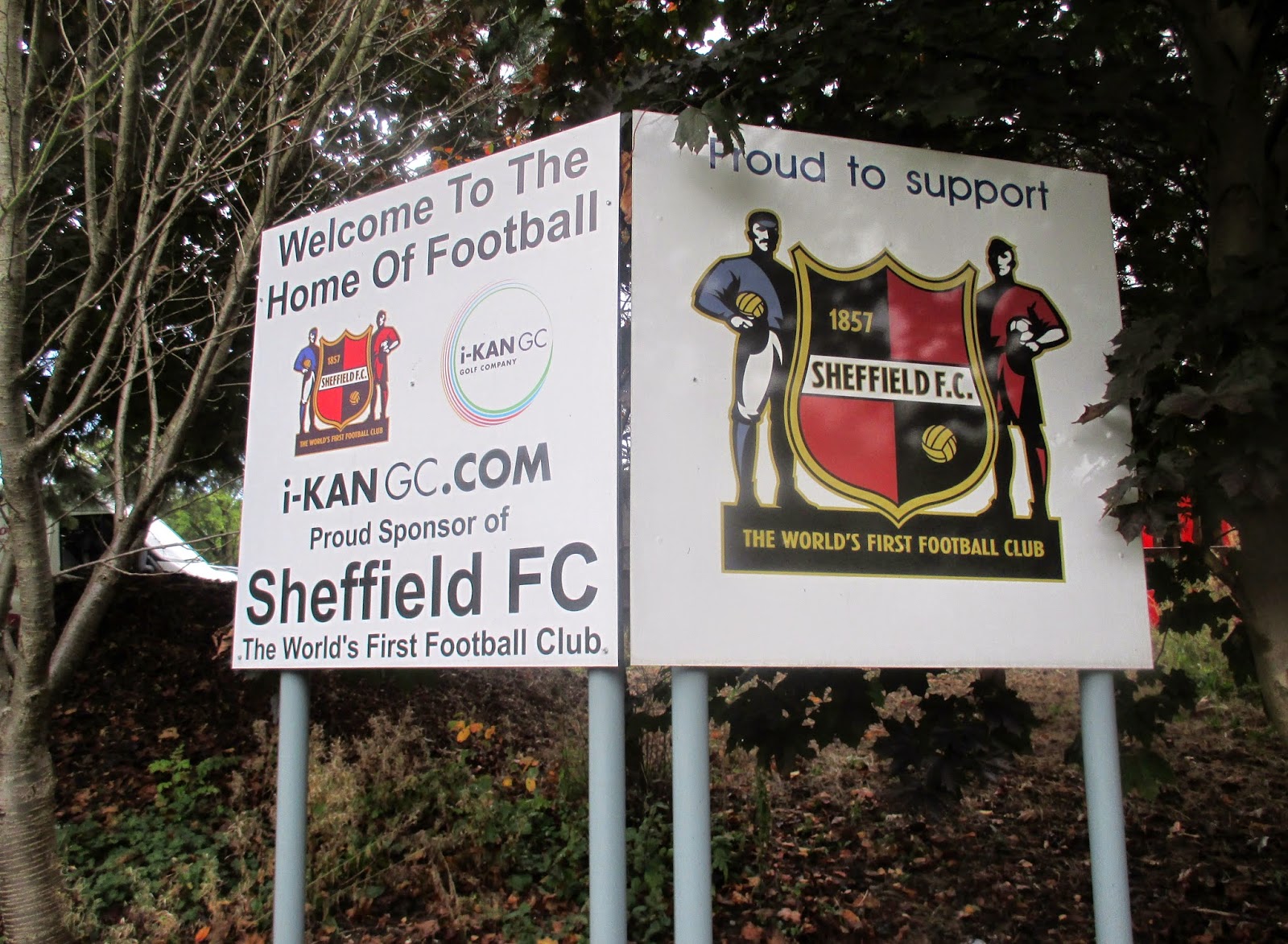 On this corresponding Saturday last season I visited the oldest surviving football ground at Hallam and I vowed to return (be it one year later) to the Steel City to finally tick off the oldest football club on the planet.

Whereabouts and Whatsabouts
The south Yorkshire city of Sheffield takes its name from the River Sheaf, which during the 19th century gained an international reputation for the production of crucible and stainless steel. However the musical birthplace of the Arctic Monkeys, Pulp, Def Leppard,  the Human League and ..erm...John Shuttleworth.. wasn’t my exact football destination today, as Sheffield FC play home games seven miles south of the city in Dronfield.
The town is in the valley of the River Drone in north-east Derbyshire between Chesterfield to the south and Sheffield to the north, making it a popular commuter town. Dronfield is known to have been in existence prior to the 1086 Domesday Book, and has a 12th-century parish church. In 1662 Charles II granted the town a market and its industrial history includes coal mining, engineering, the wool trade and the production of soap and steel. 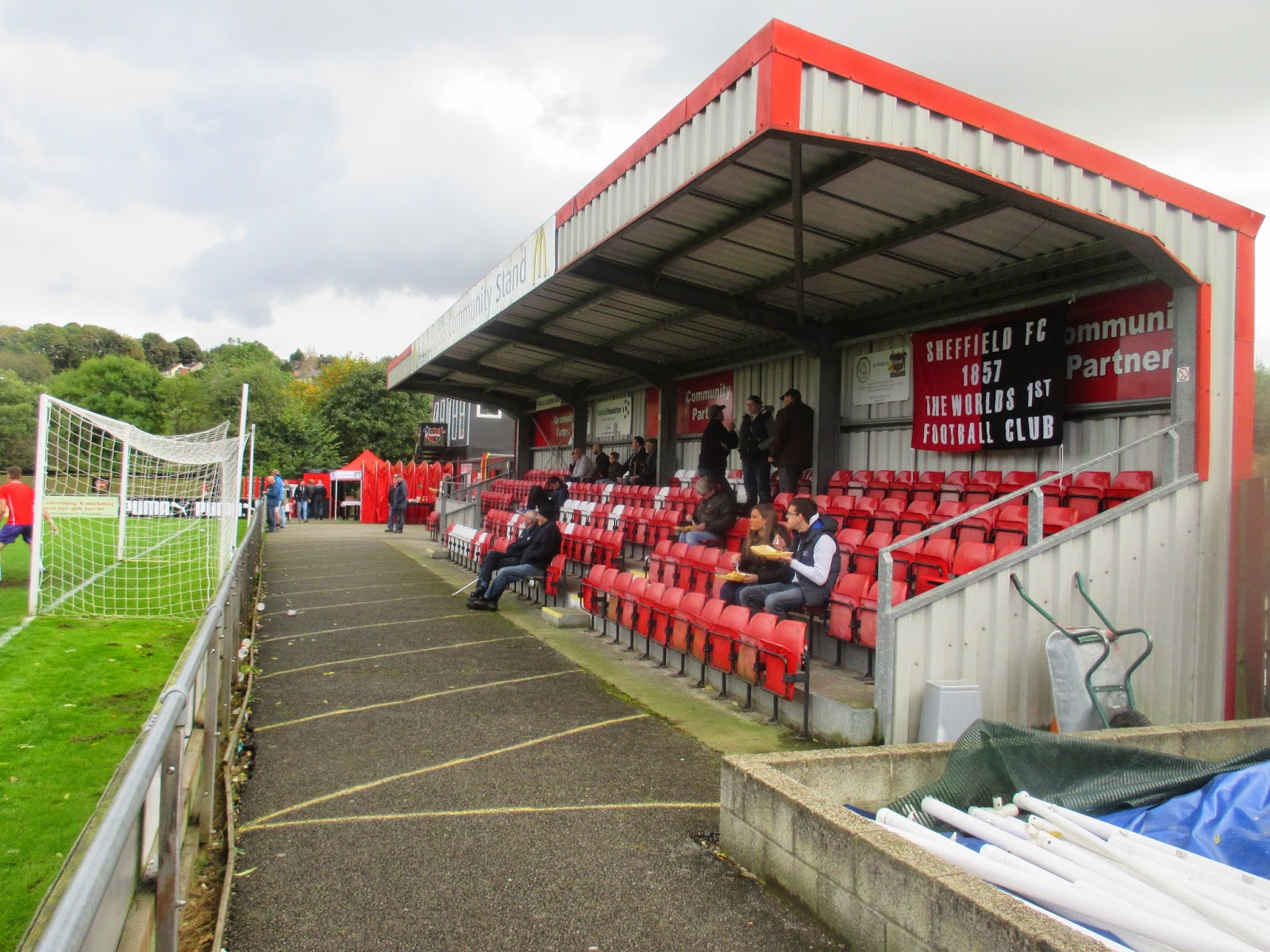 Plantpot History
Officially recognised by FIFA as the oldest football club in the world, Sheffield Football Club formed in 1855 when members of a local cricket club organised informal kick-abouts without any official rules. Nathaniel Creswick and William Prest formed the first football club with the inaugural Sheffield FC meeting taking place on the 24th October 1857 at Parkfield House in the suburb of Highfield. As they were the first club they obviously had no one to play against, so matches between club members took place with the likes of  "Married v Singles" or "Professionals v the Rest". on a field adjacent to their original headquarters on East Bank Road. 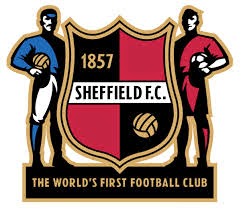 At the club's AGM on the 21st October 1858, the first set of rules were drawn up, which were referred to as the Sheffield Rules, which were distinctive with no offside rule and the introduction of free kicks for foul play.
Hallam formed in 1860, with the two clubs playing each other in the first ever local derby and by 1862 there were 15 clubs in the Sheffield area. They became members of The Football Association in November 1863 but continued to use their own set of rules, until reluctantly adopting the FA directive in 1878.
During the 19th century Sheffield were founder members of the Midland Alliance in 1889 and Midland League in 1891. They also played in the Sheffield League and Yorkshire League then in 1903 they won the FA Amateur Cup beating Ealing 3-1 in the final at Bradford.
They returned to the Yorkshire League in 1949-50, playing within its two divisions until becoming founder members of the Northern Counties East League in 1982. They won the NCEL Division One title twice in 1988-89 and 1990-91 to win promotions to its Premier Division, with relegation in between due to not having floodlights. In 2007-08 season Sheffield finished runner-up to Retford United to win promotion to the Northern Premier League Division One South. They’ve played in the division since including a 4th place finish in 2012, when but lost out in the play-offs to Chasetown. 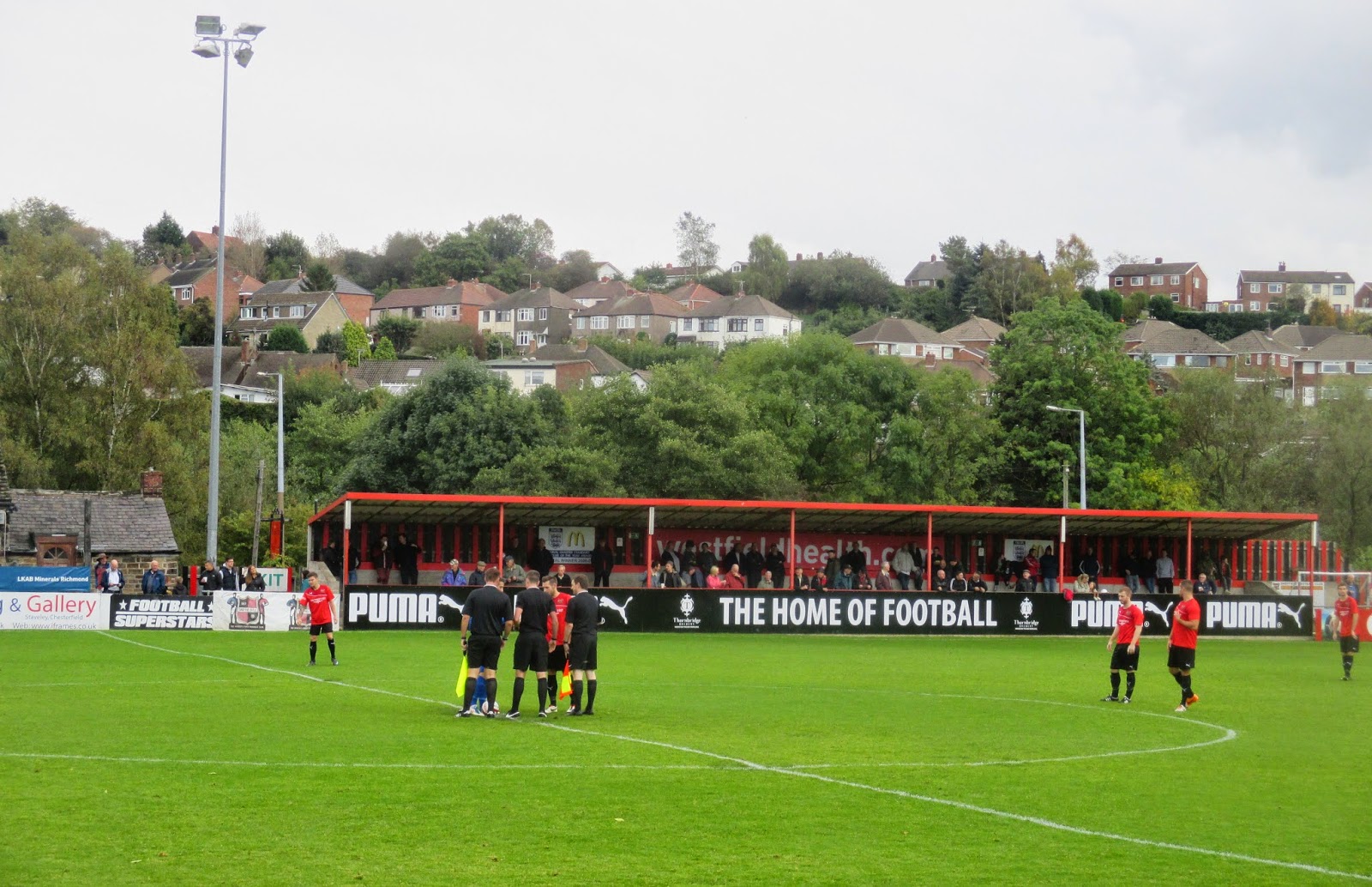 The club have played at a number of grounds around the Steel City, initially at Strawberry Hall Lane Park, before renting grounds at Newhall Athletic, Old Forge and a ground near Hunters Bar on Ecclesall Road. There was a charity match between Sheffield and Hallam played at Bramall Lane in late 1862, with the ground then being used by Sheffield for important fixtures, however the owners were never keen on the pitch being used for football, so the reluctant agreement lasted until 1875 when the club vowed to never play at the ground again.
Sheffield finally settled at the new Abbeydale Park ground in 1921, until moving to Hillsborough Park in 1988. The club moved to the  Don Valley Stadium in 1991 but the ground was unsuitable for the NCEL, so they relocated to the former greyhound stadium at Owlerton. 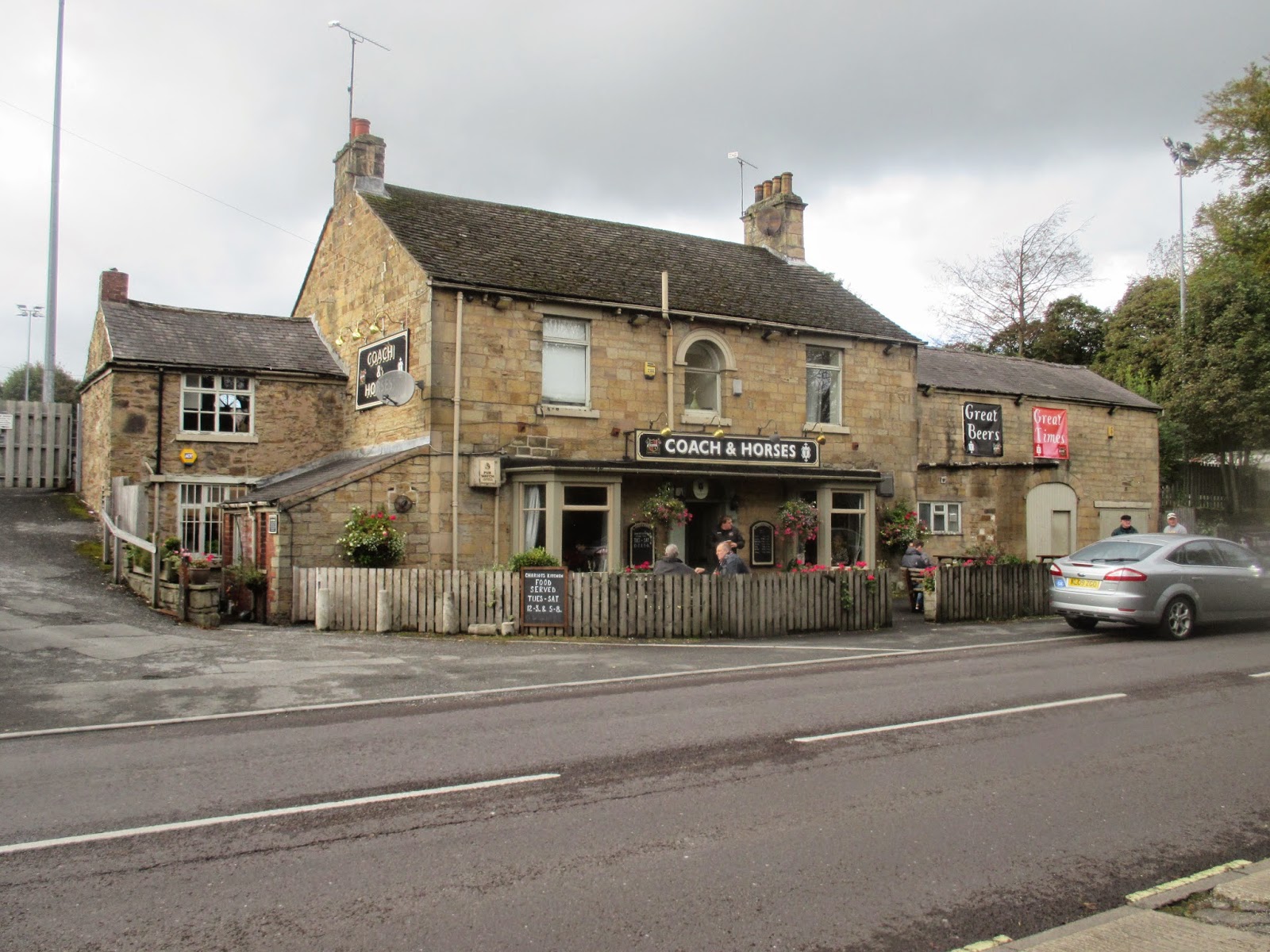 Sheffield FC finally found a ground they could call their own when they purchased the Coach and Horses pub and the adjoining land in 2001.The field was previously used by the Coach and Horses pub team, and was also home to Dronfield United and Norton Woodseats.
The stadium is now called the Home of Football Stadium and has all its main facilities in one corner of the ground at the admission entrance. The main stand is behind the goal having 250 red and white flip seats, next to this is the snack bar, players tunnel and in the very corner the club shop. There are club offices in the form of a cabin perched on top of the dressing rooms, with everything decked out in the club colours of black and red. The East Terrace runs to the half way line meeting the rear of the Coach & Horses. The rest of the ground is hard standing with the team dugouts on the west side and a good old fashioned manual scoreboard in the far corner. There are three floodlight pylons on each side with the grass banking on the west side covered with blue plastic sheeting. The current capacity is 2089. 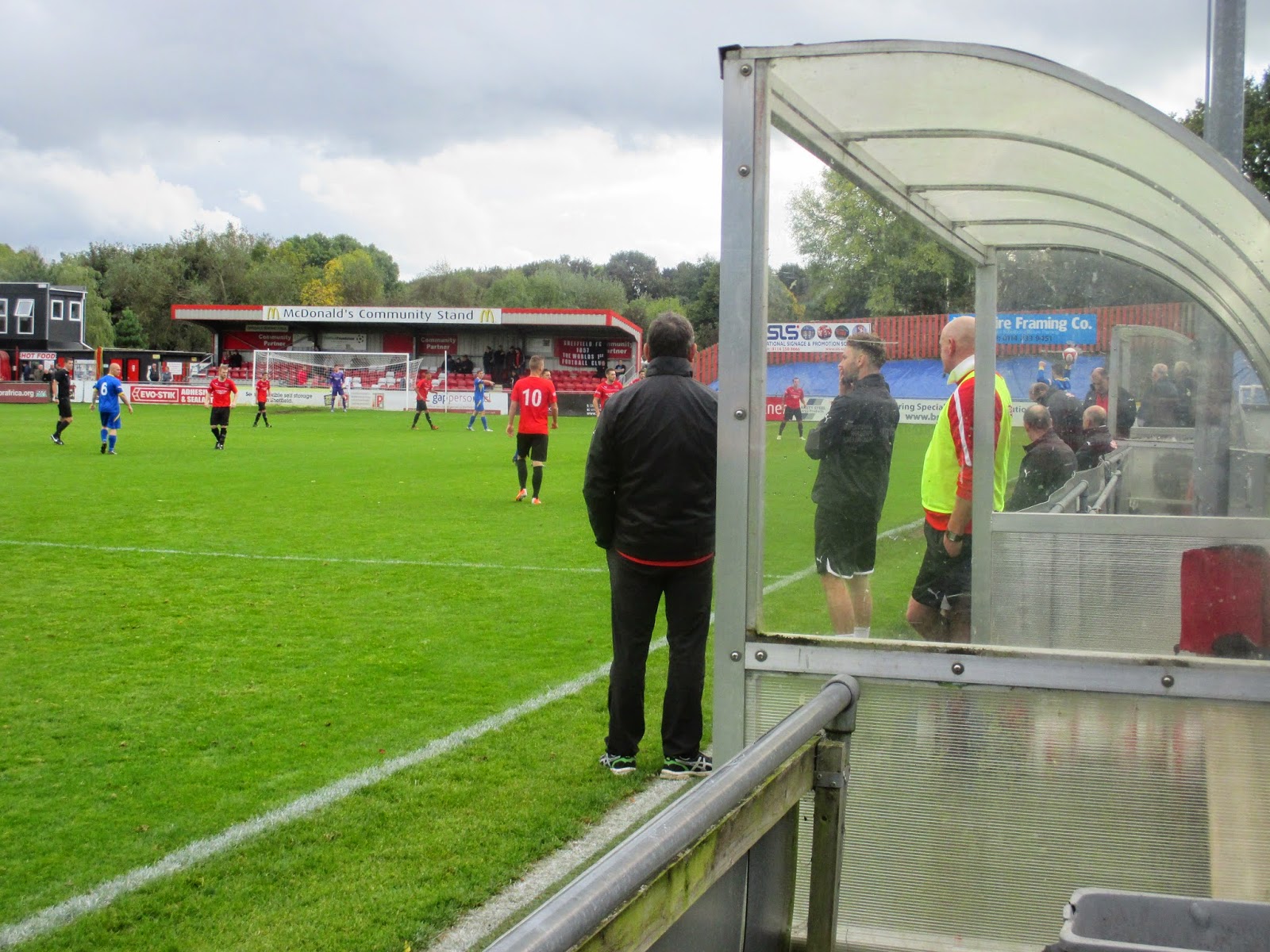 The Match
Sheffield held on to taking the three points against a spirited Spalding side who looked dead and buried in the second half. The home side took the lead on 11 minutes when a terrific cross from Reece White picked out Ash Longstaff who volleyed home from six yards. Spalding presented the hosts with scoring opportunities by TWICE passing the ball back to Michael Duggan who in turn picked the ball up, the ‘keeper seemed to have amnesia when it comes to the back pass rule which changed in 1992. However they weren’t punished from the free kicks and the hosts went into the break with a slender one goal lead.
Sheffield made a frantic start to the second half, gifted a goal after only 30 seconds when a throw in by-passed the Tulips defence to present Longstaff with an easy finish, then moments later Reece White met a corner kick with a powerful header which beat the defender at the far post.
On 54 minutes Andrew Tidswell headed the visitors back into the game, but the three goal cushion was restored with twenty minutes remaining, with a sweet 20 yard drive from Tim Whittaker. That looked to be game over but two minutes later Lewis Webb fired in from the edge of the penalty box, then in the 85th minute he repeated the feat, rifling in another similar effort to set up a grandstand finish.
The busiest person in the Home of Football this afternoon was the lad who puts the numbers up on the scoreboard, but his work was finally done for the day as both teams came close to adding to the score, but it was Sheffield who held on to win an entertaining match by four goals to three. 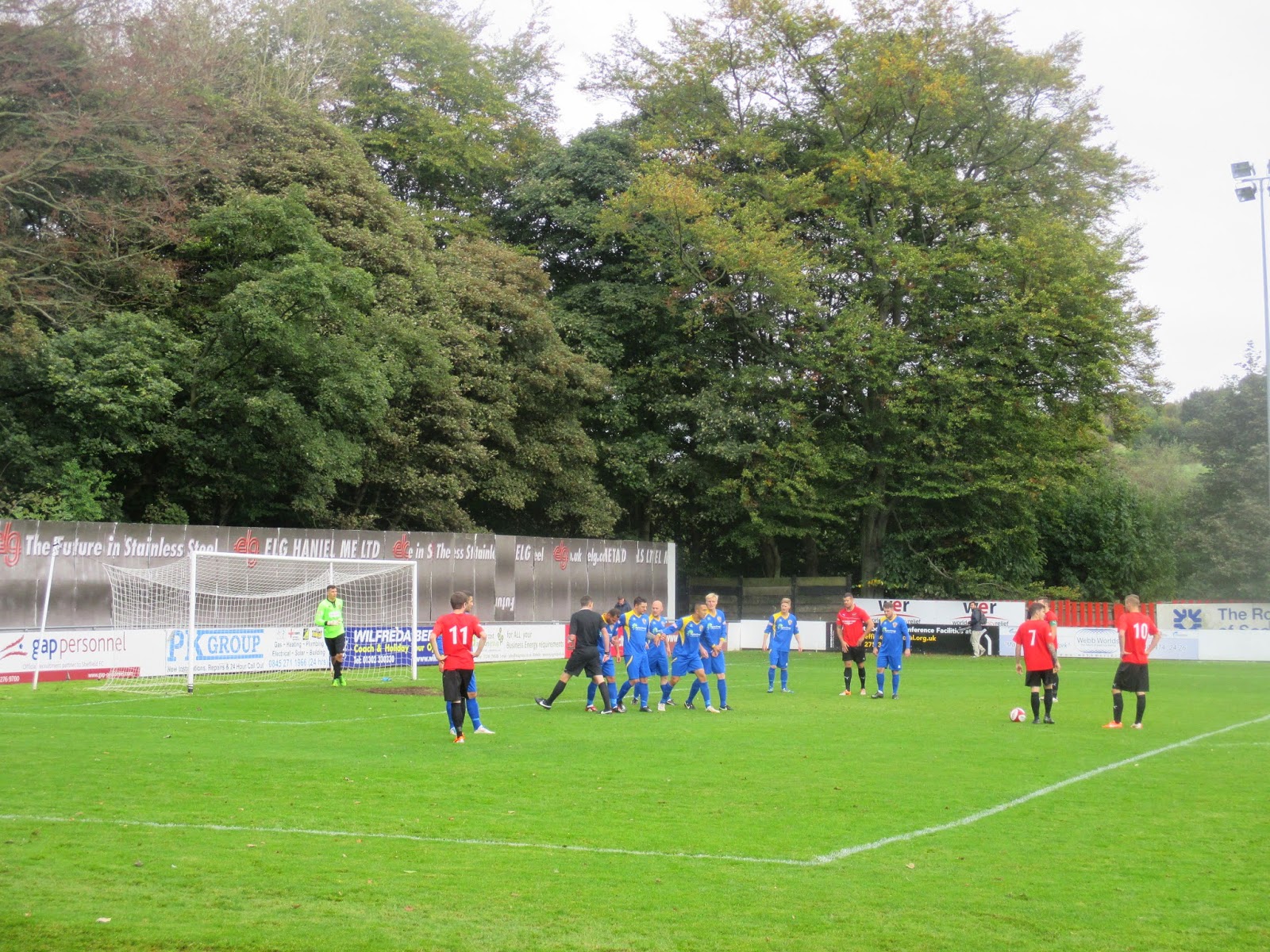 My Matchday
No rushing for train connections or heavy boozing sessions for this one, as I took the Smudgers for a day out in Sheffield. We arrived just before noon and after a ‘Spoons lunch and a bit shopping, I headed off to the train station to catch the 1405 Nottingham train for the short journey down to Dronfield. The ground is a good 10-15 minute walk from the station up the Sheffield Road, so I had time for a swift drink in the Coach & Horses before kick off, as it would have been disrespectful and very rude of me to visit this ground without having a pint in its pub. After a thrilling match it was straight back to Sheffield to meet up at the car park, before heading back up the M1/A1, meaning we were back home by quarter to eight. A really enjoyable day out, although I’m not a great lover of driving to matches as this restricts my pub visits, but I don’t really mind making an exception when it comes to spending time with my family... then nicking off to a match!

Foetoes (26 pictures from the Home of Football)

should have tried the Jaipur! excellent IPA not advisable when driving tho! glad you enjoyed the trip to dronfield