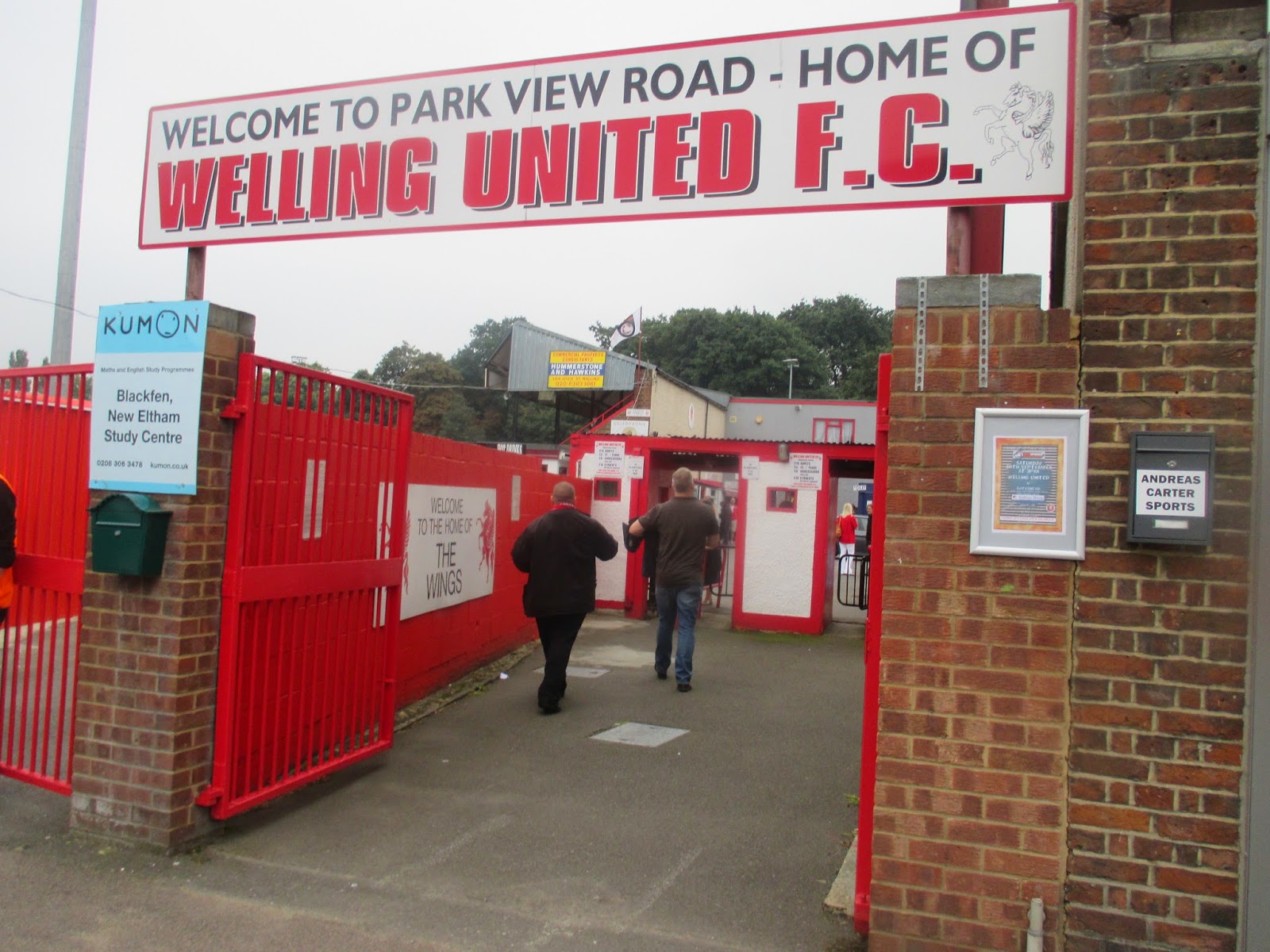 Whereabouts and Whatsabouts
Welling is a district south-east of the capital which forms part of the London Borough of Bexley, originating as a village on the main road between London and Kent.
It was traditionally a staging post for coaches, with three inns along the main road, so its name is said to come from the era of horse-drawn vehicles. Expressions such as "well in" to Kent, or "well end" from the journey up and down Shooters Hill, which was steep road on route and notorious stomping ground for highwaymen. However, local historians have recently concluded that the true origin is most likely from 'Welwyn' meaning 'place of the spring’ due to the existence of an underground spring located at Welling corner. 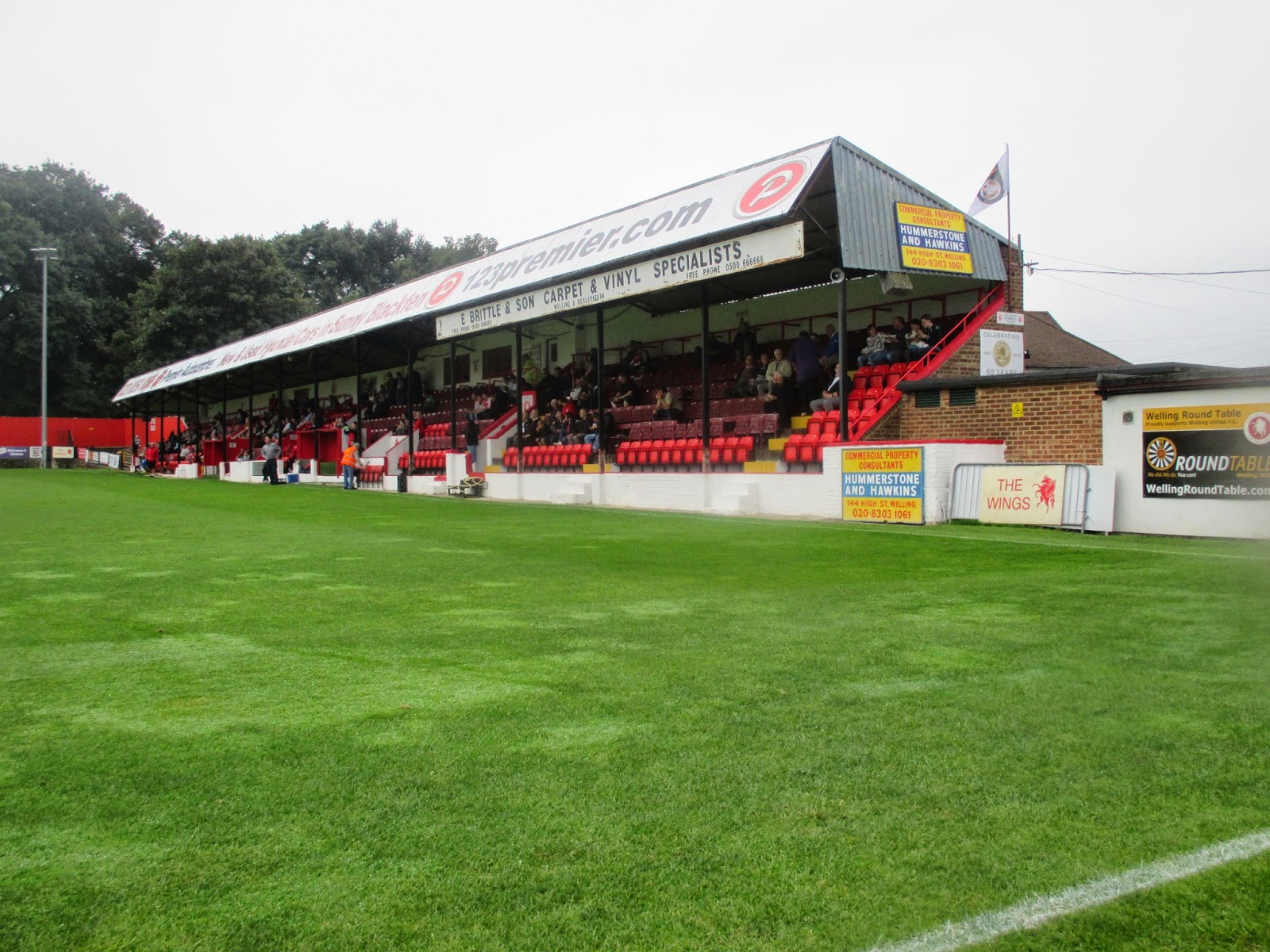 Plantpot History
Welling United Football Club was founded in 1963, beginning as a youth team before gradually developing a senior side in the London Spartan League. They joined the Athenian League in 1978 and progressed to the Southern League three years later. In 1985–86 they were champions of the Southern League Premier Division, taking the title with 23 points to spare to win promotion to the Conference.

The club spent 14 seasons in the division and during this era enjoyed FA Cup success reaching the first round proper six years on the bounce, including defeating Gillingham 1-0 in a replay front of a record attendance of 4,100. They also made a third round appearance in 1989, but lost to a narrow one goal defeat away to Blackburn Rovers.
The Wings were relegated from the Conference in 1999–2000 season and returned to the Southern League, before the reconstruction of the pyramid placed them in Conference South in 2004.
Welling was served with a winding-up petition by HMRC in August 2010, given 14 weeks to pay off the outstanding debt. The club survived with almost the entirely £60,000 raised by the supporters to clear all monies owed, but were handed a transfer embargo and a 5 points deduction by the Football Conference. After a third place finish in 2011-12 they lost out in the play-offs to Dartford but were champions the following season, so returned to top non-league status after an absence of 13 years. 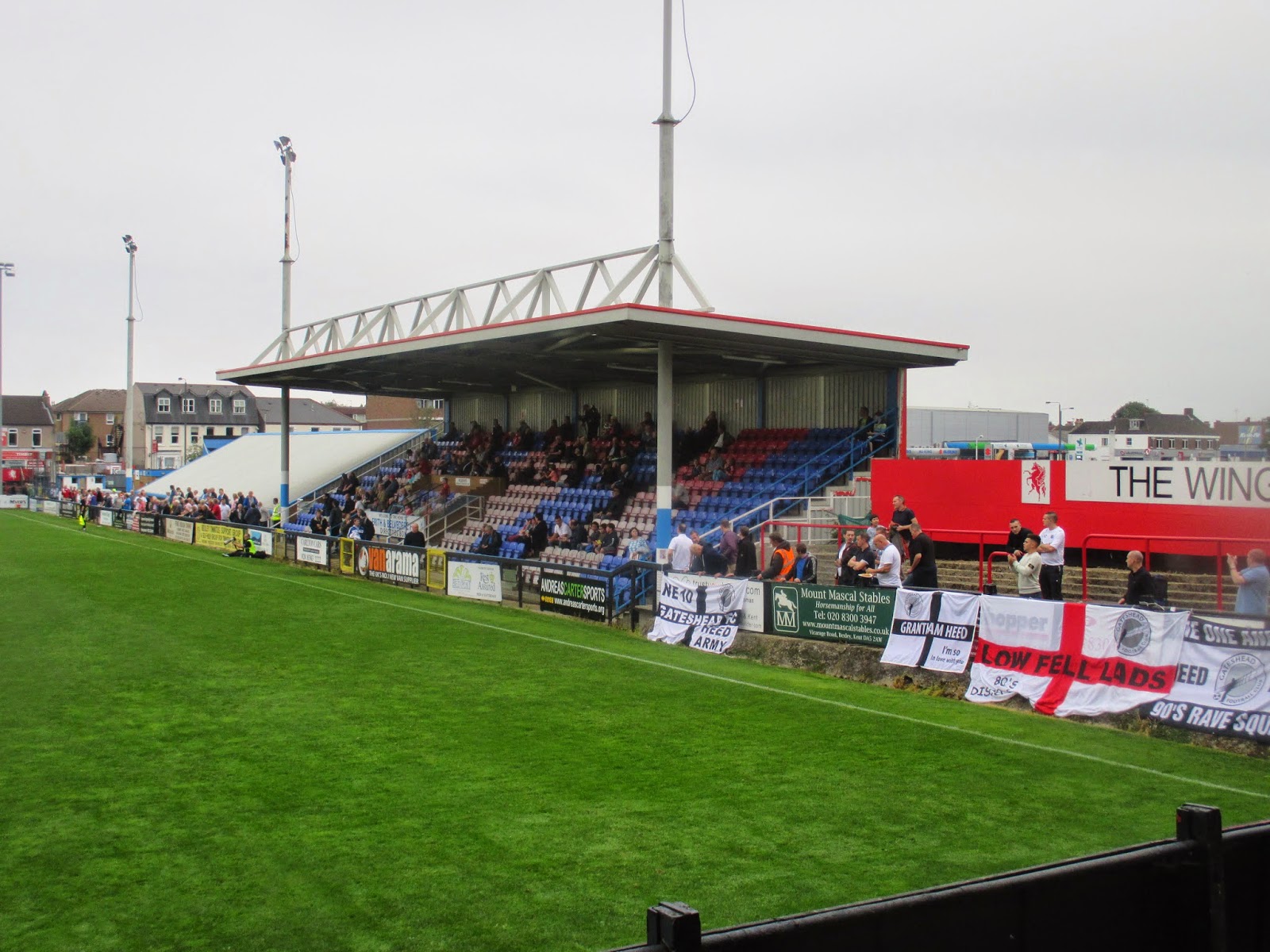 Welling United played on park pitches before moving to Butterfly Lane in Eltham. They were one of ten clubs interested in taking over the vacant former home of the defunct Bexley United at the Park View Road ground. In January 1977 they were granted a 15 year lease, with work commencing on the derelict ground in April and ready in time for the first game on the 26th August. Like the football club, the ground progressed as the team moved through the leagues up to the Conference.
The ground is quite unique as it appears as two grounds in one, due to the share arrangement with Erith and Belvedere FC. The original Main Stand opened in 1950, runs two-thirds pitch length after it was extended in the 1960s. The stand is small but quite steep, with a peaked roof, supporting pillars and filled with 570 red and burgundy flip seats. There and red wooden dugouts at the front and behind the stand is the club reception, Wings Sports Bar, clubhouse and refreshment bar. There is terracing behind each goal with red crash barriers at the High Street end, but nothing to lean on at the Danson Park End, with both terracing coming around to meet the stands.
The east side looks new in comparison with the rest of the ground as this is the Erith and Belvedere end as they’ve ground shared since 1999.This side is also known as the Cricket End and has a neat 600 capacity stand which was opened in 2002. The stand is decked out in blue and red flip seats next to the large clubhouse known as Deres Bar, which dominates this side of the ground.
The floodlights were replaced in 2007 after damage caused by severe storms and gale force winds in December 2006, with the lights on the Welling side of the ground replaced with corner pylons. 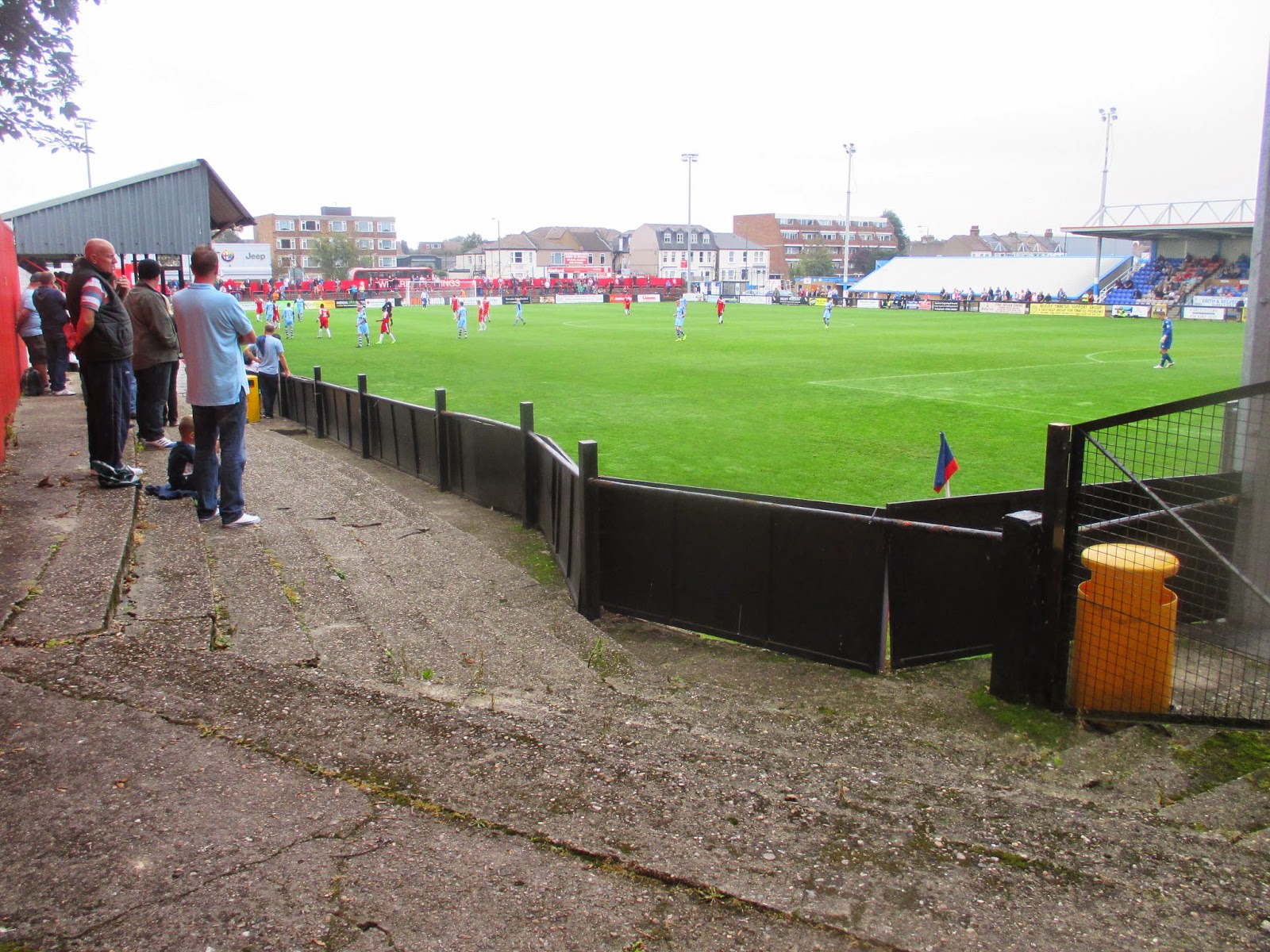 The Match
Welling and Gateshead settled for a point apiece in a proverbial game of two halves. The Wings entered the field to the band which(according to Alan Partridge) The Beatles could have become, as Paul Macca & Wings 'Live and Let Die' blasted from the PA. The hosts started the match faster than the 'Speed of Sound' racing into a fifth minute lead when Harry Beautyman picked up the ball on the edge of the box and fired in a low right foot shot which flew into the bottom left hand corner. Welling were the better side throughout the opening period and With a Little Luck could have increased their advantage as the Heed looked lacklustre and short of ideas. 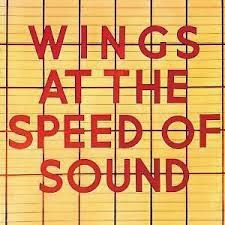 The start of the second half reflected the first but it was the away team that came out of the dressing room like a Band on the Run to also score five minutes from the kick off. Recent signing Carl Finnigan headed in a peach of a cross from JJ O'Donnell to make a dream start to his Gateshead career having been introduced as a second half substitute. It seemed just a matter of time before the Tynesiders grabbed a winner but the hosts didn’t Let Em In and on Another Day would have took maximum points.
*Apologies for this match report but this week I got a Beatles themed tattoo and McCartney seems to have got under my skin. 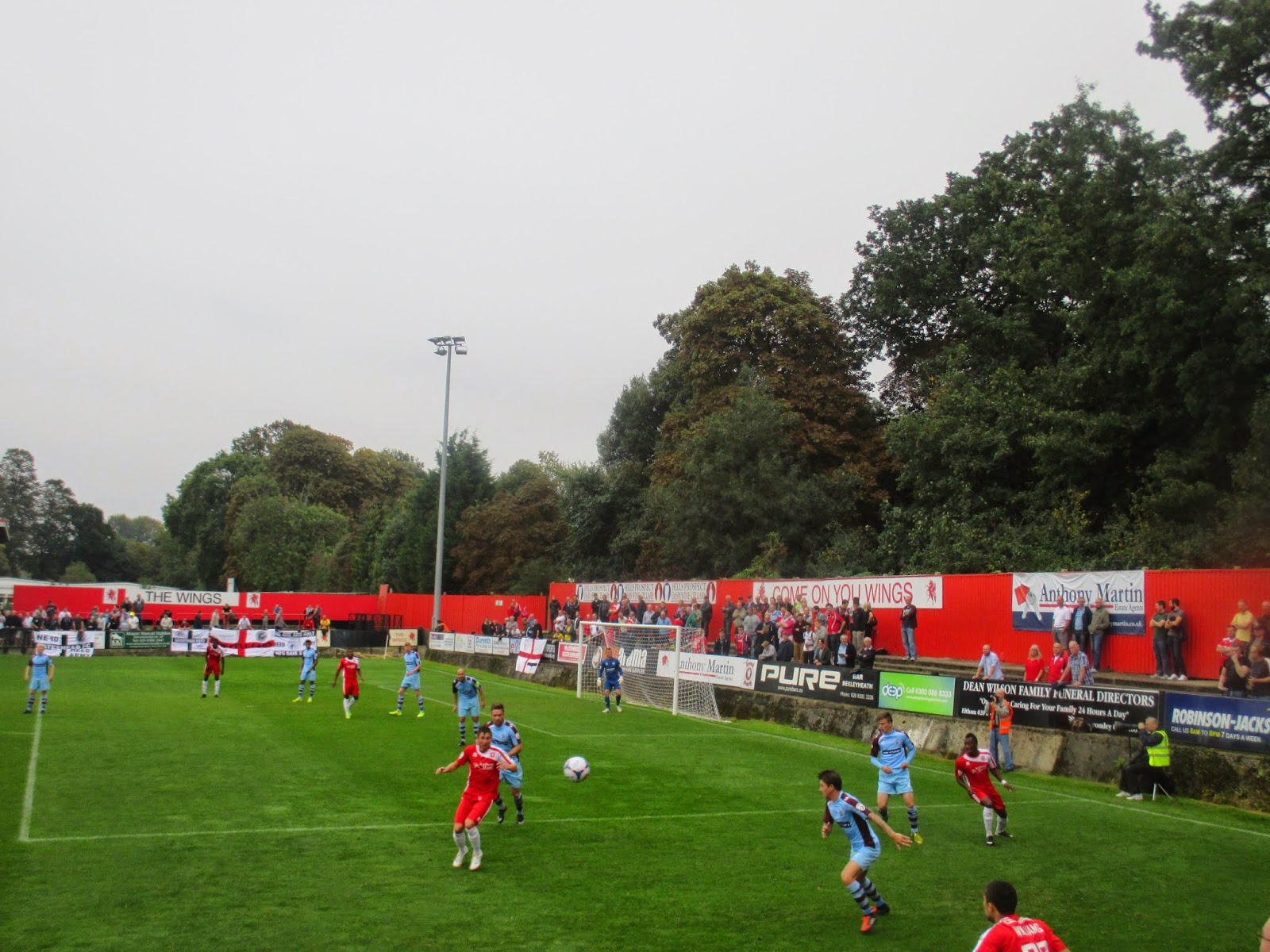 My Matchday
I arrived at Kings Cross at quarter to eleven, so sufficient time for a couple of previous uncharted Wetherspoons pubs before the onward journey to today's destination. I took the Northern Line down to Elephant & Castle before heading back up to London Bridge station to visit the very nice Pommelers Rest, found just along from Tower Bridge. The train duration to Welling takes around 25 minutes, so I was there in good time for a browse in the local record shop and of course a couple of pints in the local JDW. I was surprised how big Welling is, as the main road which stretches down to the High Street and onto Park View Road had plenty of shops and places to eat and drink. As expected the Heed Army who left on the earlier 0630 train drank in the majority of the pubs on the main drag, so when I met everyone it was apparent that I was the soberest Tynesider in town. The return journey back to Kings Cross and onwards to Newcastle went without a hitch, so another successful long Heed Army trip, which leaves me just one step away from maybe finally completing the top 5 divisions for the first time. 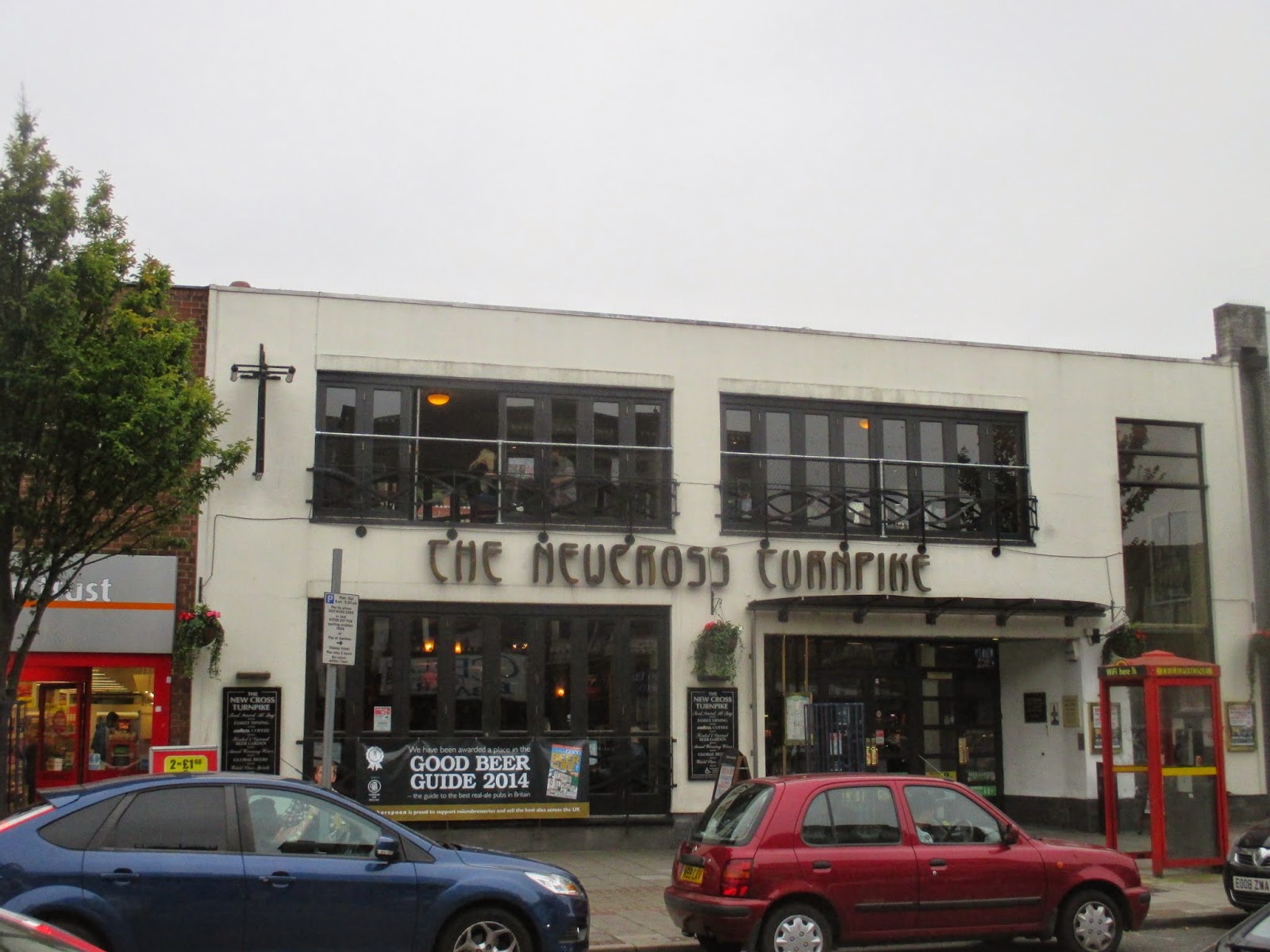