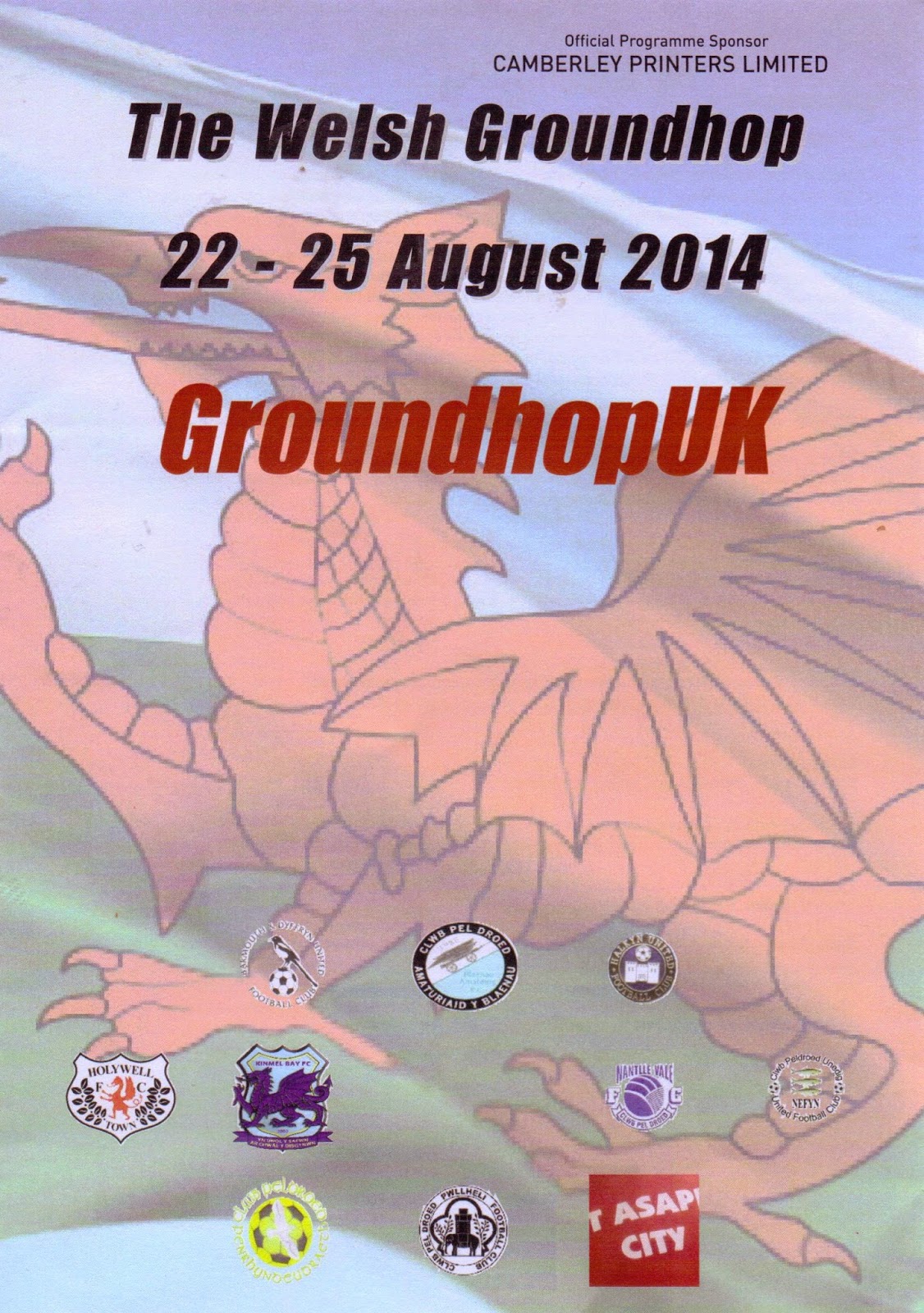 I would have loved to have done the whole weekend of this years Welsh Groundhop but unfortunately I was only free on Bank Holiday Monday. I made an early start, picking up north-east celebrity Groundhopping couple Lee and Katie in Houghton-le-Spring at 6.45 on route for the drive to north Wales . The journey went smoothly with no heavy traffic so we made good time, arriving in Holywell at 9.30. The early arrival meant we had time for a  pre-hop drink in the local Wetherspoons before the 11 o'clock kick-off, but unfortunately our day didn’t get off to the best of starts, as Katie was stung in the eye by a wasp. She bravely soldiered on, although Lee suggested that she can only count the other grounds on the hop if she gets a wasp sting! 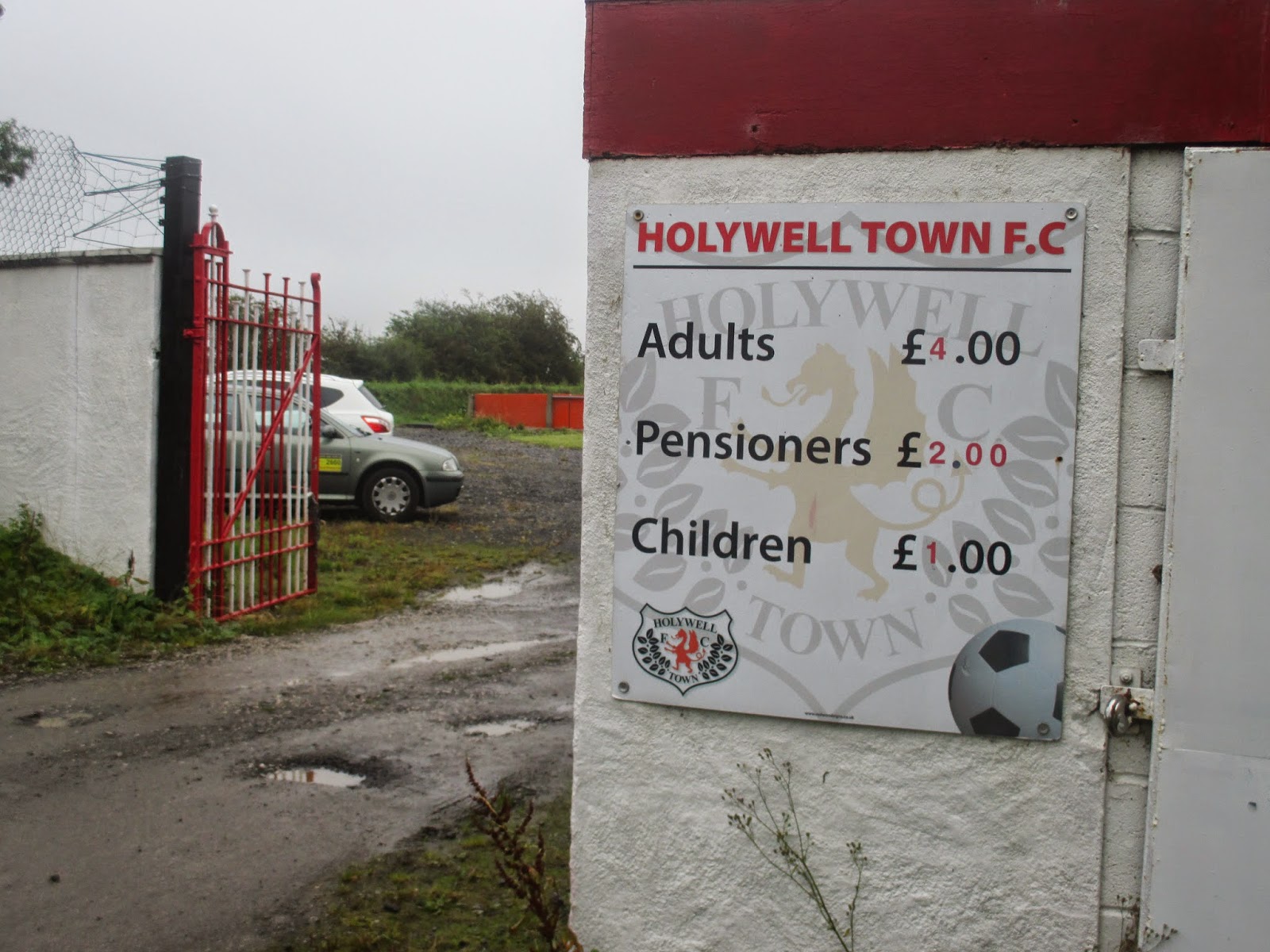 The day began in the market town of Holywell (Welsh: Treffynnon) which is the fifth largest town in Flintshire, lying to the west of the estuary of the River Dee. Holywell takes its name from the St Winefride's Well, a holy well surrounded by a chapel, which has been known since Roman times. The well has been a pilgrimage since about 660 when Saint Winefride was beheaded there by Caradog who attempted to attack her. Pilgrims worldwide visit the well, which is one of the Seven Wonders of Wales and the town is known as The Lourdes of Wales. 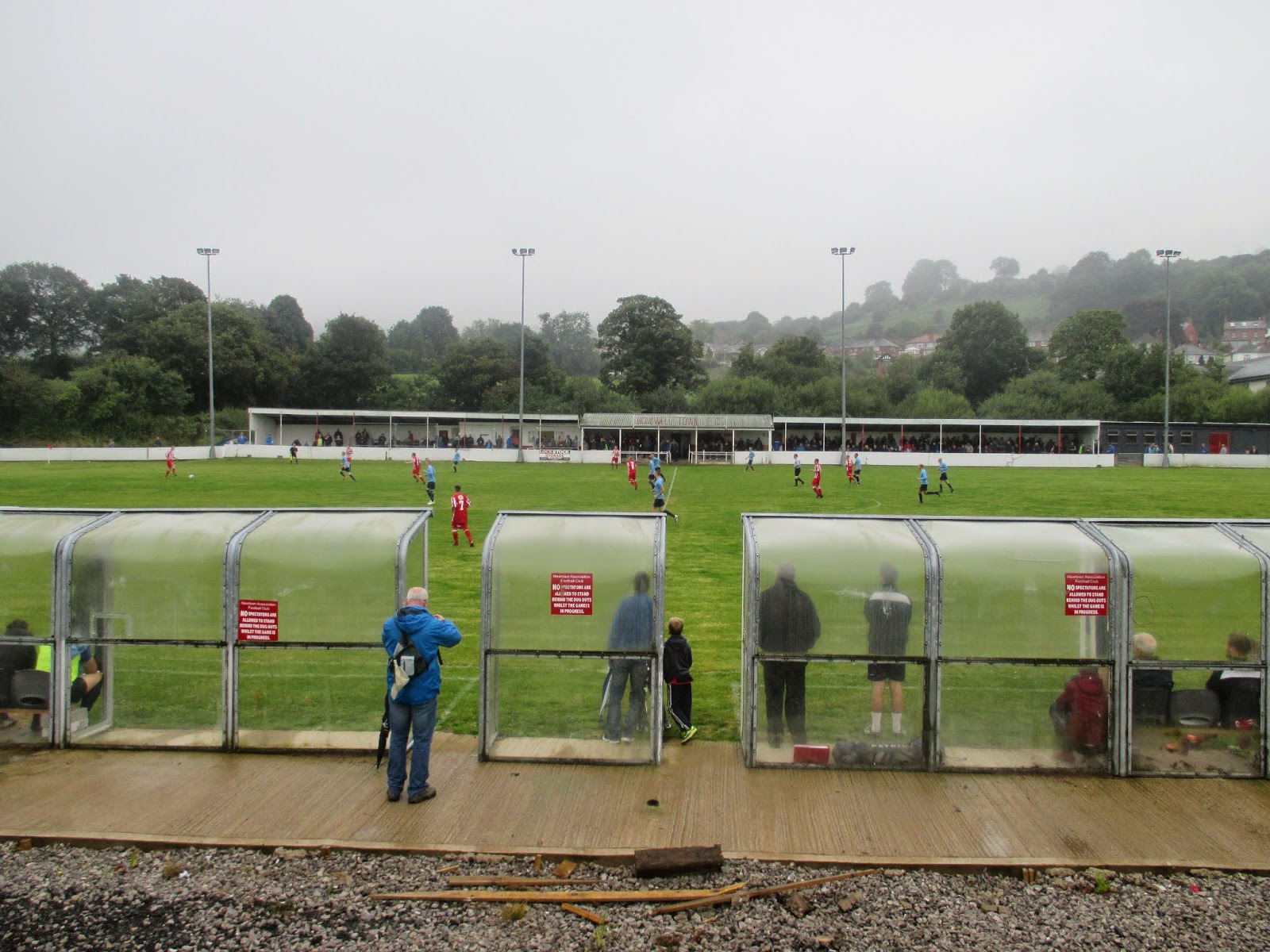 Football in Holywell was first established in 1893 when Holywell FC  became one of the seven founder members of the North Wales Coast League, playing on a ground known as Ffordd Fer (Short Way) The club went to the wall in 1902, but three years later a new club took their place in the shape of Holywell United, rejoining the NWC League for the 1912-13 season. The club later played in the newly formed north division of the Welsh National League between 1921 until 1929, when they changed their name to Holywell Arcadians.The new name brought success as the club were Welsh football League Champions twice in three seasons at the turn of the 1930s.
After the Second World War Holywell Town were formed with a new home at Halkyn Road, where they’ve played ever since and also adopted the nickname of “The  Wellmen” The club enjoyed instant cup success and switched from the West Cheshire League to the Welsh League North in 1949, winning the title in 1952-53. From the mid-1960s Holywell played in local leagues and also the Clwyd League until becoming founder members of the Cymru League in 1990 and the League of Wales two years later. The Wellmen currently play in the Welsh Alliance League Division 1 after being relegated from the Cymru Alliance in the 2005–06 season. 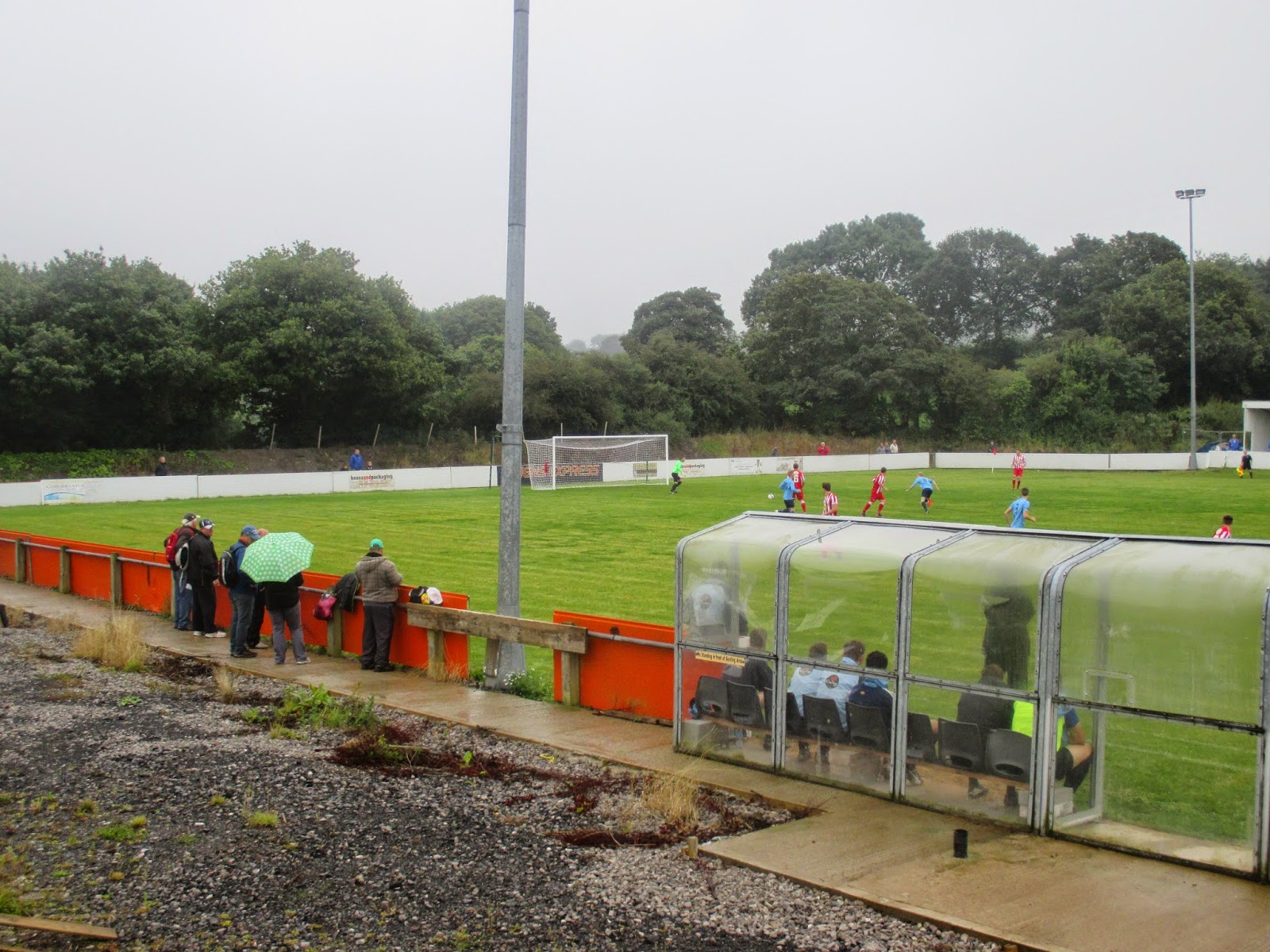 Halkyn Road is found on the edge of the town centre. The main spectator facilities are found along one side of the ground, alongside the changing rooms and clubhouse which is in the middle of a refurbishment. There are two similar wooden covered stands one side kitted out with red painted bench seats and the other with terracing, which also houses the Wellman’s Retreat snackbar.  In between is another covered enclosure with seats and standing each side of the players tunnel, which is finished off with the club name on the facade. The dugouts are at the far side, with three sides of open hard standing. Lighting is provided with four lamp poles on each side and there’s a prominent slope running across the pitch. 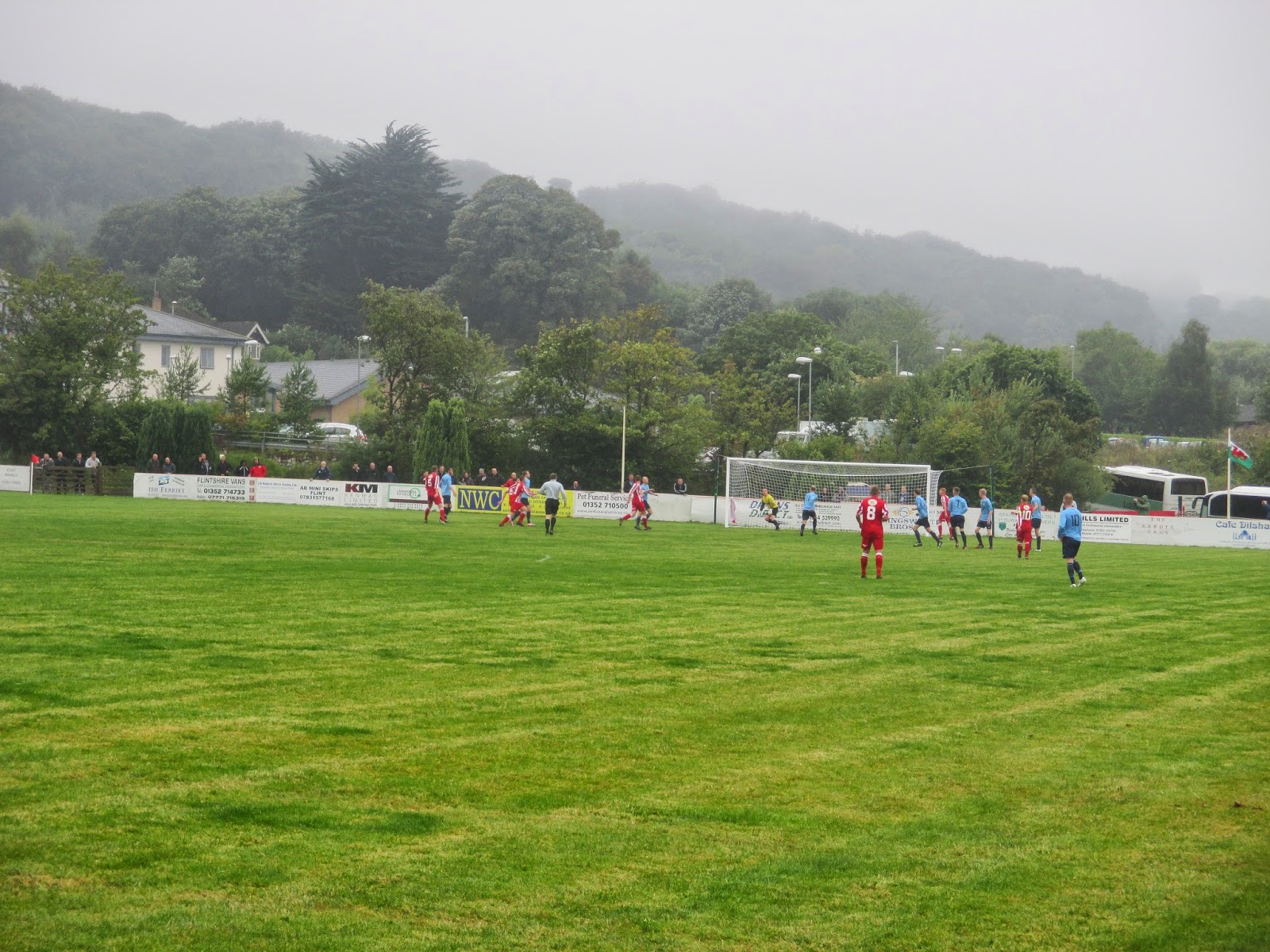 Hollywell ran out comfortable winners in the Division 1 fixture with Llandyrnog United. The Wellmen took an early lead through Sam Jones, who fired in a right foot shot after four minutes and doubled their advantage with a close range bullet header from Luke Tyson just before half time. The hosts missed a hatfull of chances in the second half, including Sam Jones missing a penalty, but they did manage to beat the ‘keeper in the 69th minute when Graeme Williams but pressure on the defenders goal line clearance, the ball bouncing off his shins and rolling over the goal line.
So a good start to the day, a decent game and a warm hospitality provided by the staff and volunteers. 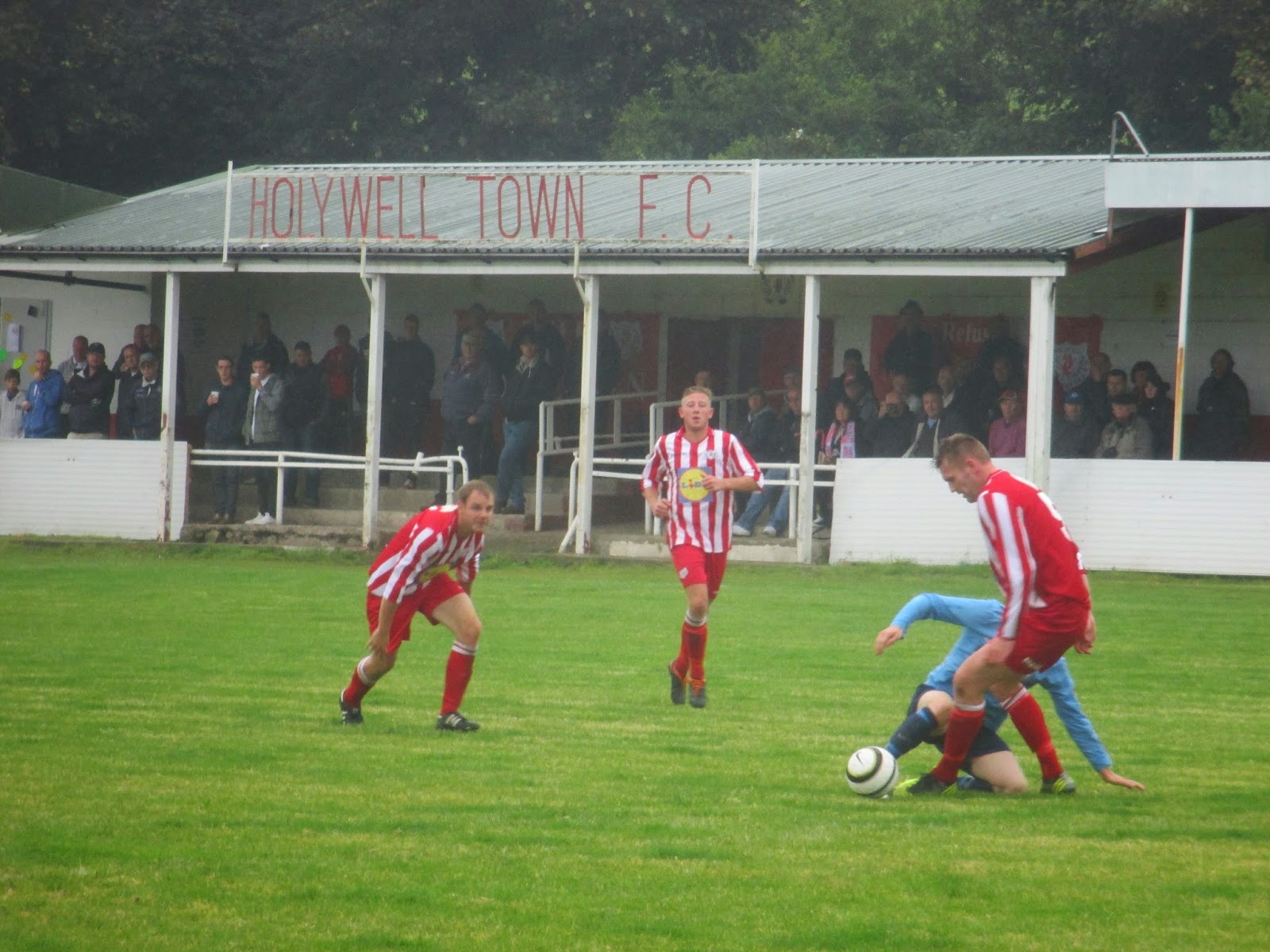 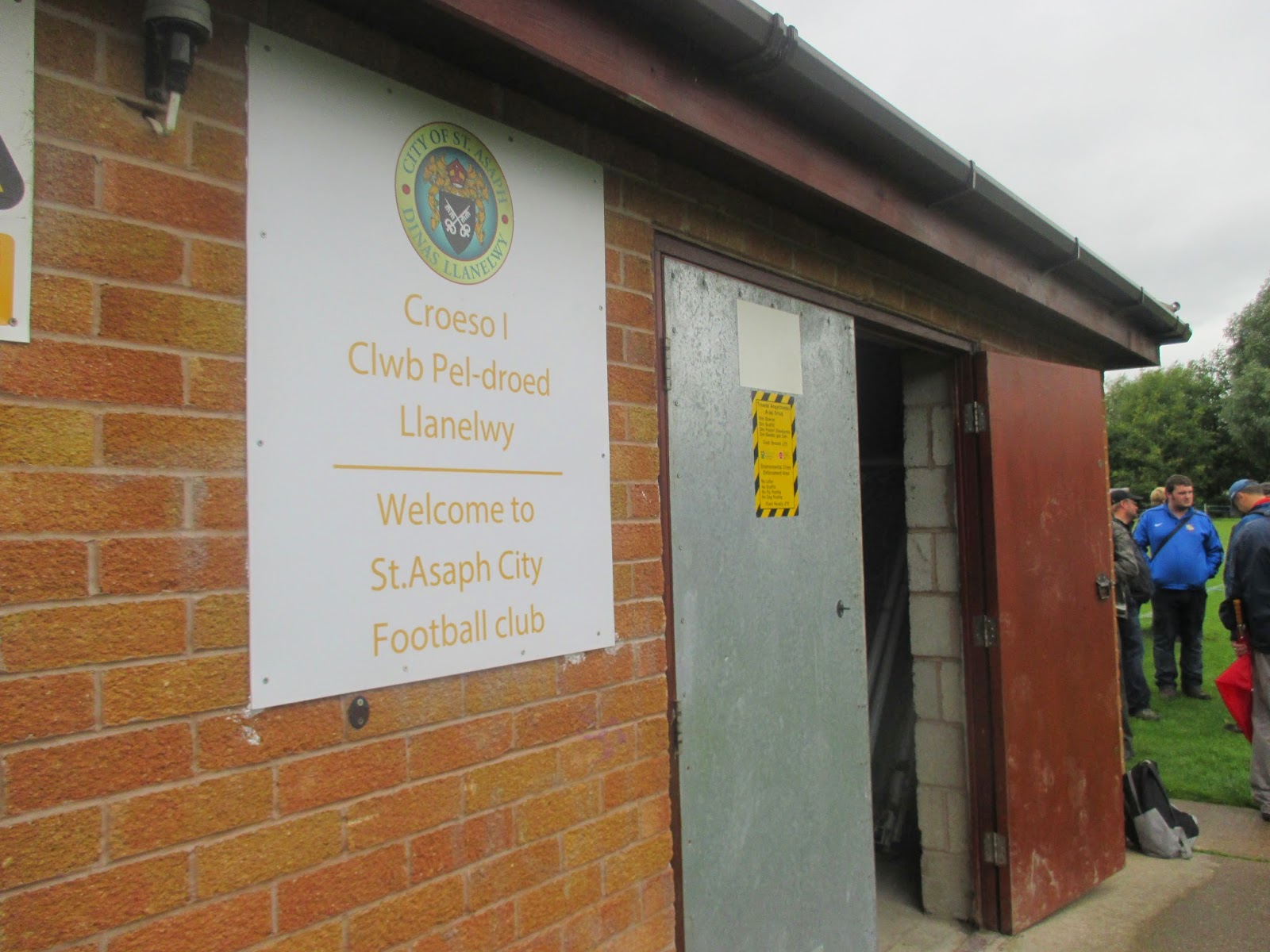 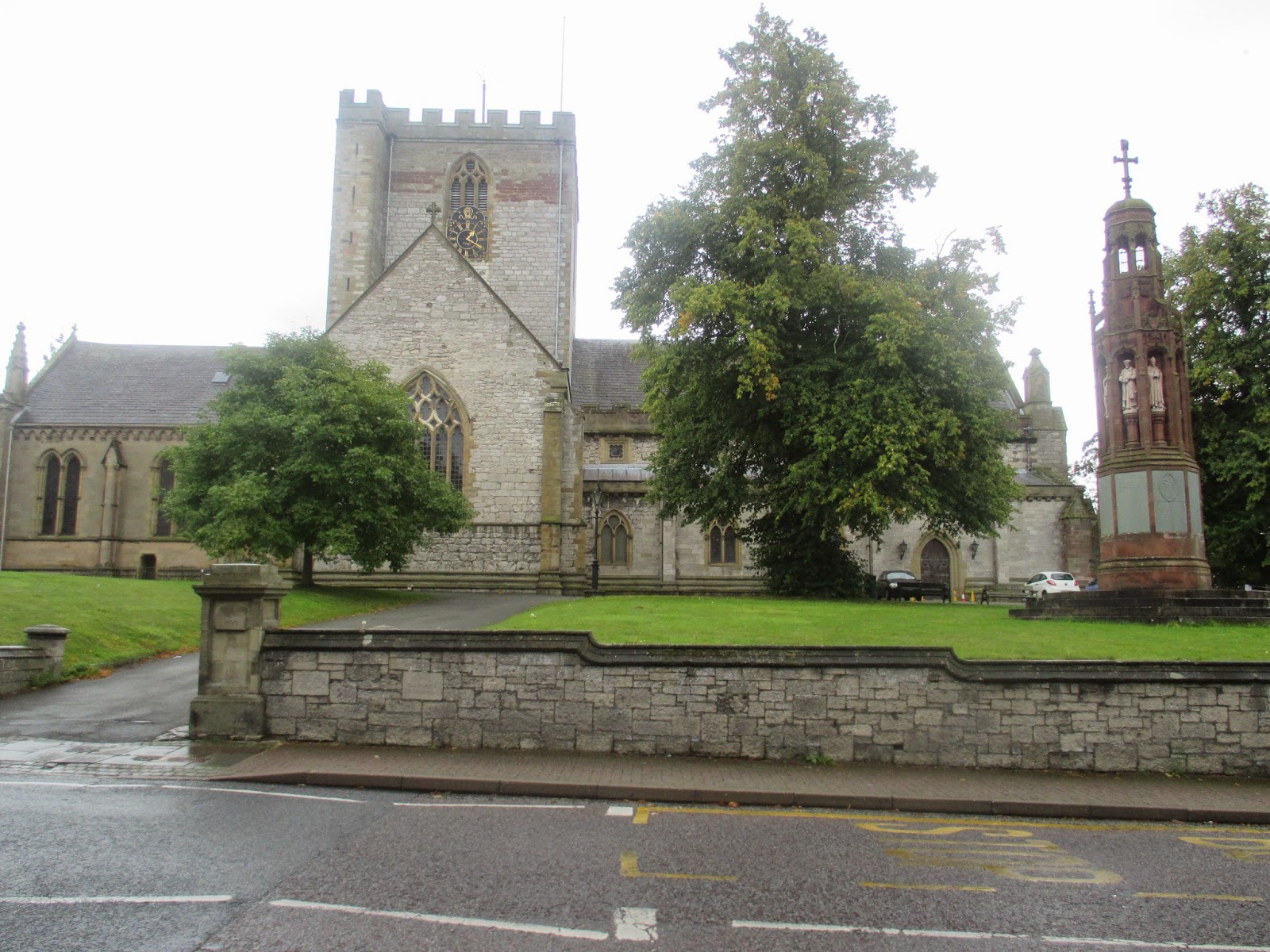 We arrived in the birthplace of former Liverpool, Leeds United(cannot really count Newcastle) and Welsh international Ian Rush with a good hour to spare before kick off. With a population of just under 3,500 and built around its ancient cathedral, St Asaph(Welsh: Llanelwy) is the newest city in Wales, giving its status as part of the Queen’s Diamond Jubilee. According to some historians the Roman fort of Varae sat on the site of the Cathedral, but it’s believed to have developed around a sixth-century Celtic monastery founded by Saint Kentigern, and is now home to the small fourteenth century St Asaph Cathedral. This is dedicated to Saint Asaph (also spelt in Welsh as Asaff), its second bishop. After finding a good parking space we visited the cathedral, which is the smallest in Britain, measuring just 182ft long and 68ft wide. 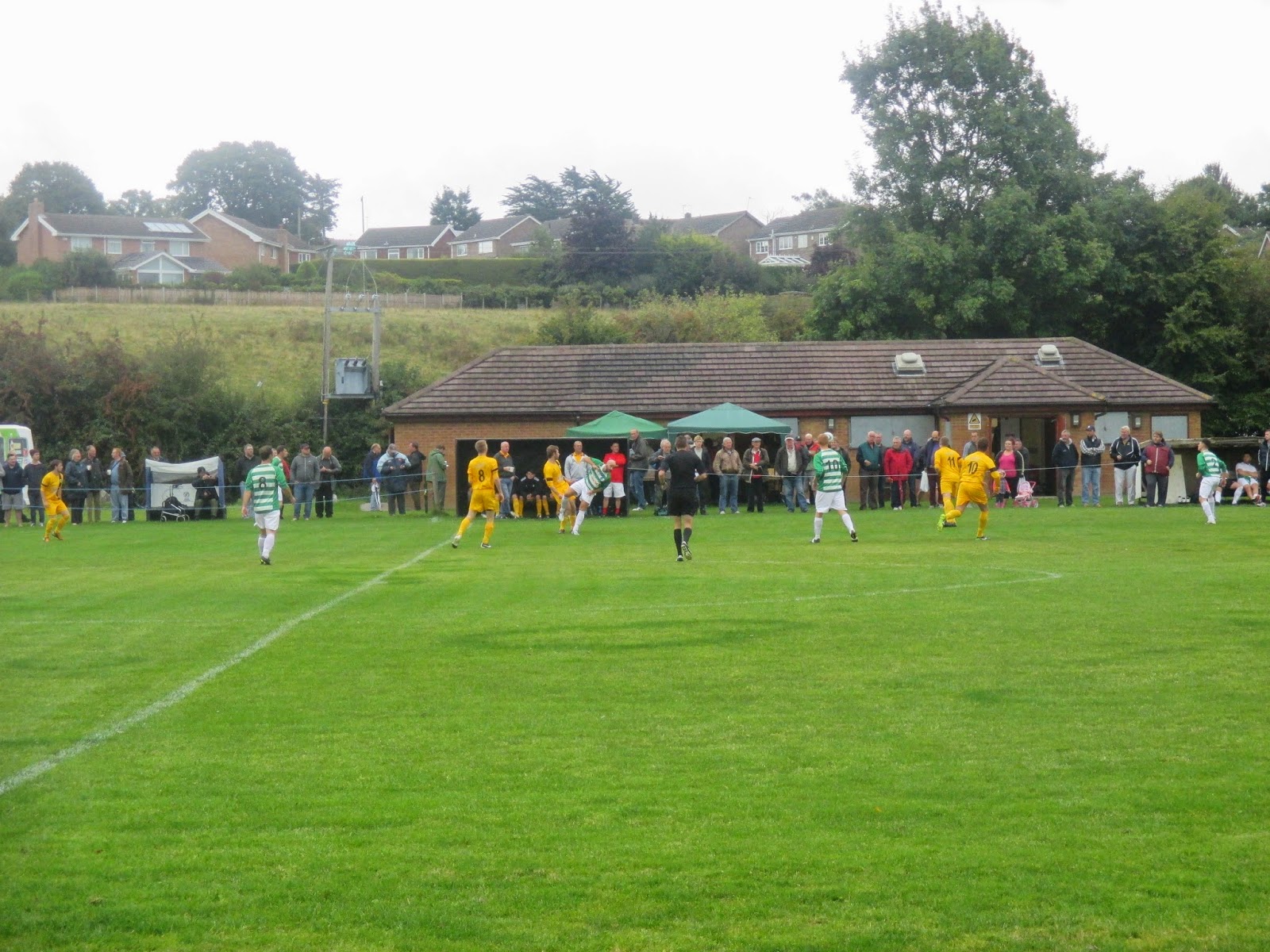 Football in St Asaph has been played since the 1880’s, although no official records of the club exist until the 1970’s when the city was represented in the Clwyd League, where they finished runners-up in 1976-77. The club folded in 1980, but reformed ten years later and rejoined the league, becoming champions in 1992-93 and promotion to the Welsh Alliance. The progress of the club game to an abrupt halt, when after an arson attack on the ground they were forced to call it a day. In 2000 a junior club was formed and the senior team was re-established in 2006 after the Council built a new pavilion at the ground. The new set up have made terrific progress, winning three promotions to rise from the Clwyd League Division 2 up to the Welsh Alliance for the 2013-14 season, finishing fourth in their debut campaign in Division 2. 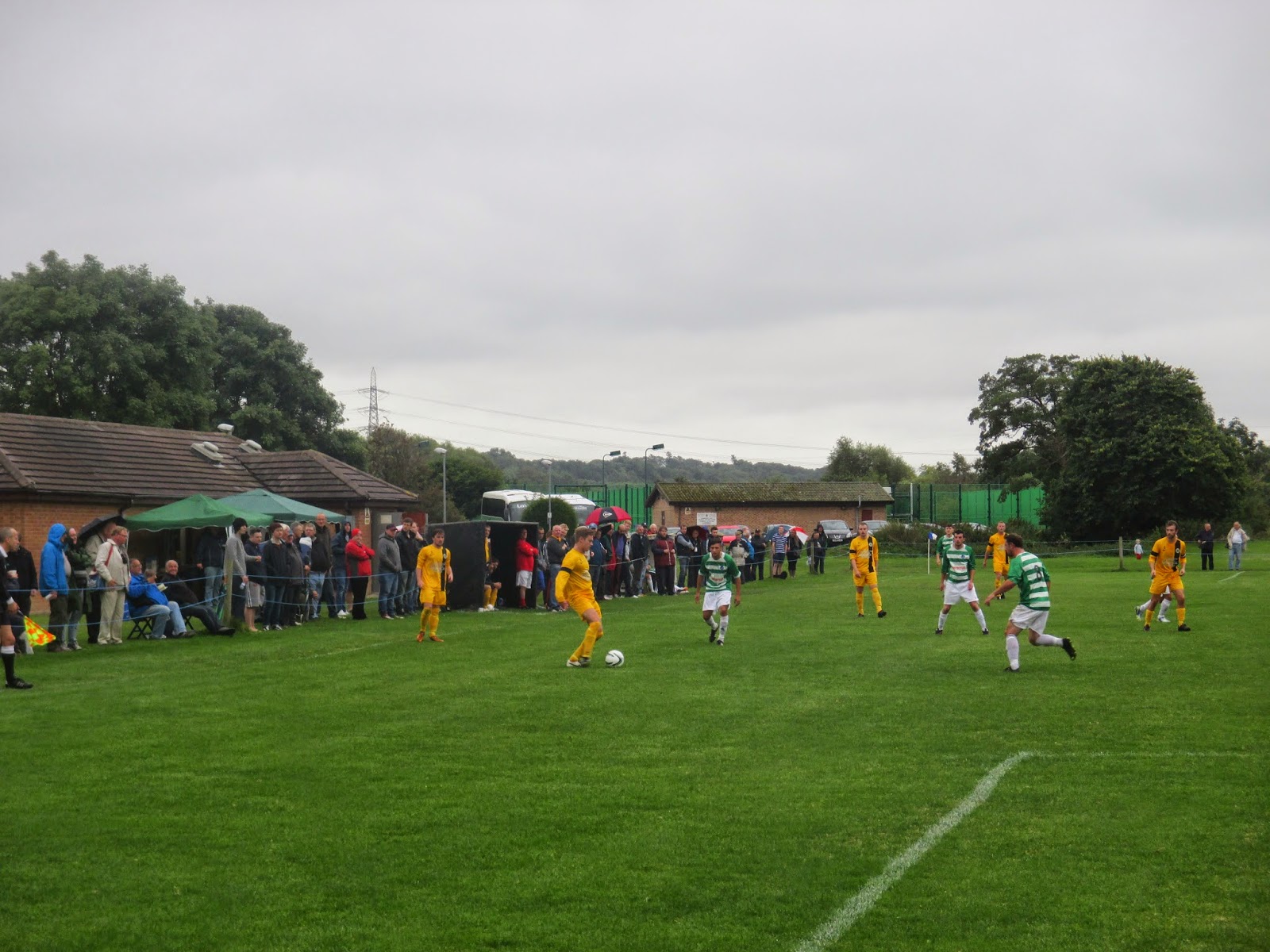 The entrance to the football ground at Roe Plas Meadows is through a parkway where the pavilion and car park is at one side of the pitch. There are a couple of slap-dash dugouts erected on this side with the rest of the ground roped off from the grass verges, with some fancy yellow goal nets. The club were very friendly and they made every effort to make us welcome. They were also very grateful that the threatening forecast of heavy rain had held off throughout our stay. 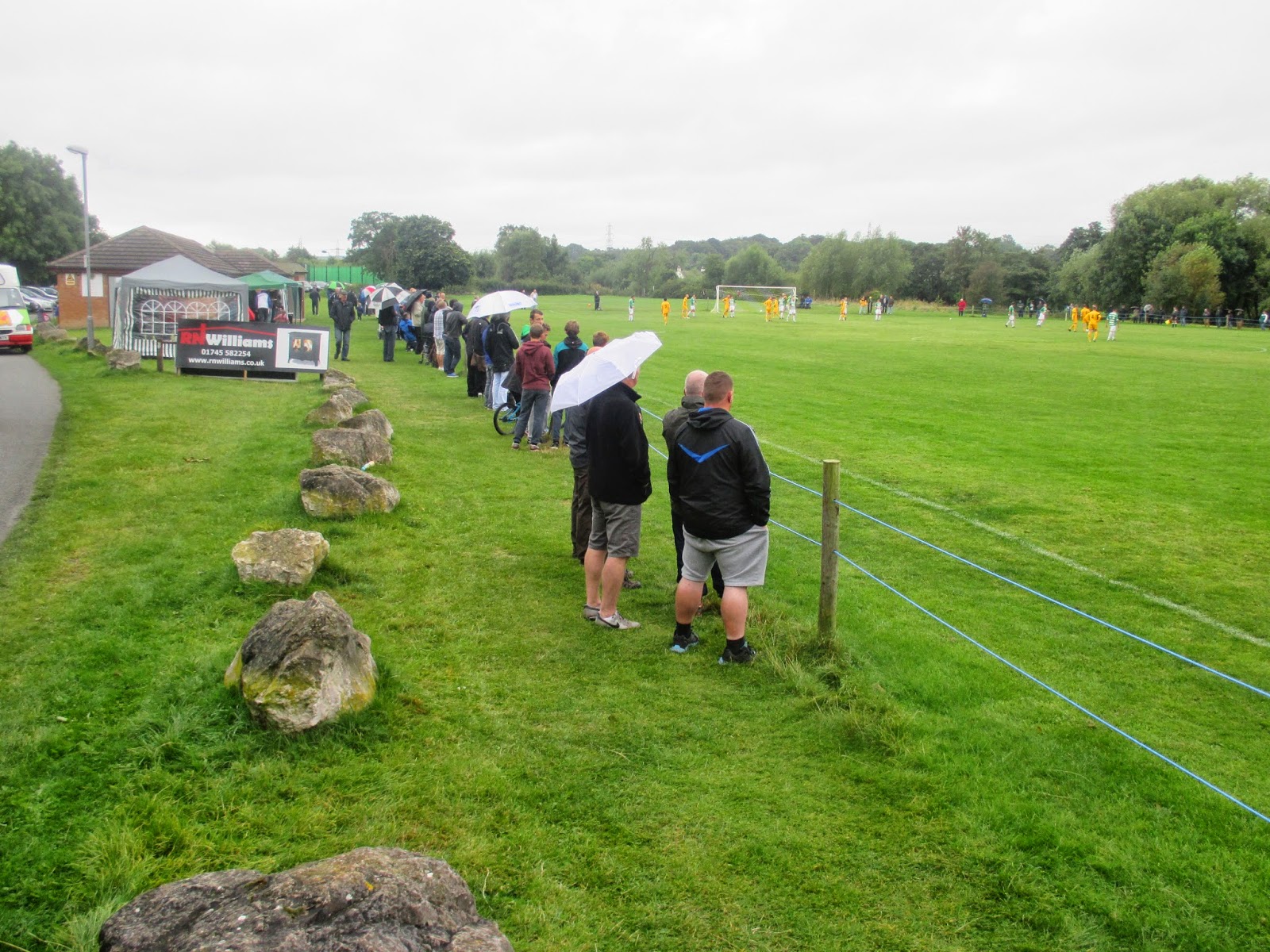 The second game took a similar pattern to the first with a comfortable win for the home side against Mochdre Sports. The hosts took the lead with a breakaway goal on 21 minutes, after defending a free kick, they won possession and played a through ball to Duncan Midgley who ran on to calmly round the ‘keeper and score. The points were clinched on the hour mark with two goals in the space of a minute, with Midgley grabbing his second followed by a left foot shot by the unmarked Dave Evans. With a quarter of an hour remaining the visitors pulled one back when Jordan Phillips intercepted a chested back pass by the defender to nip in and score, but it was a mere consolation as St Asaph were worthy winners. 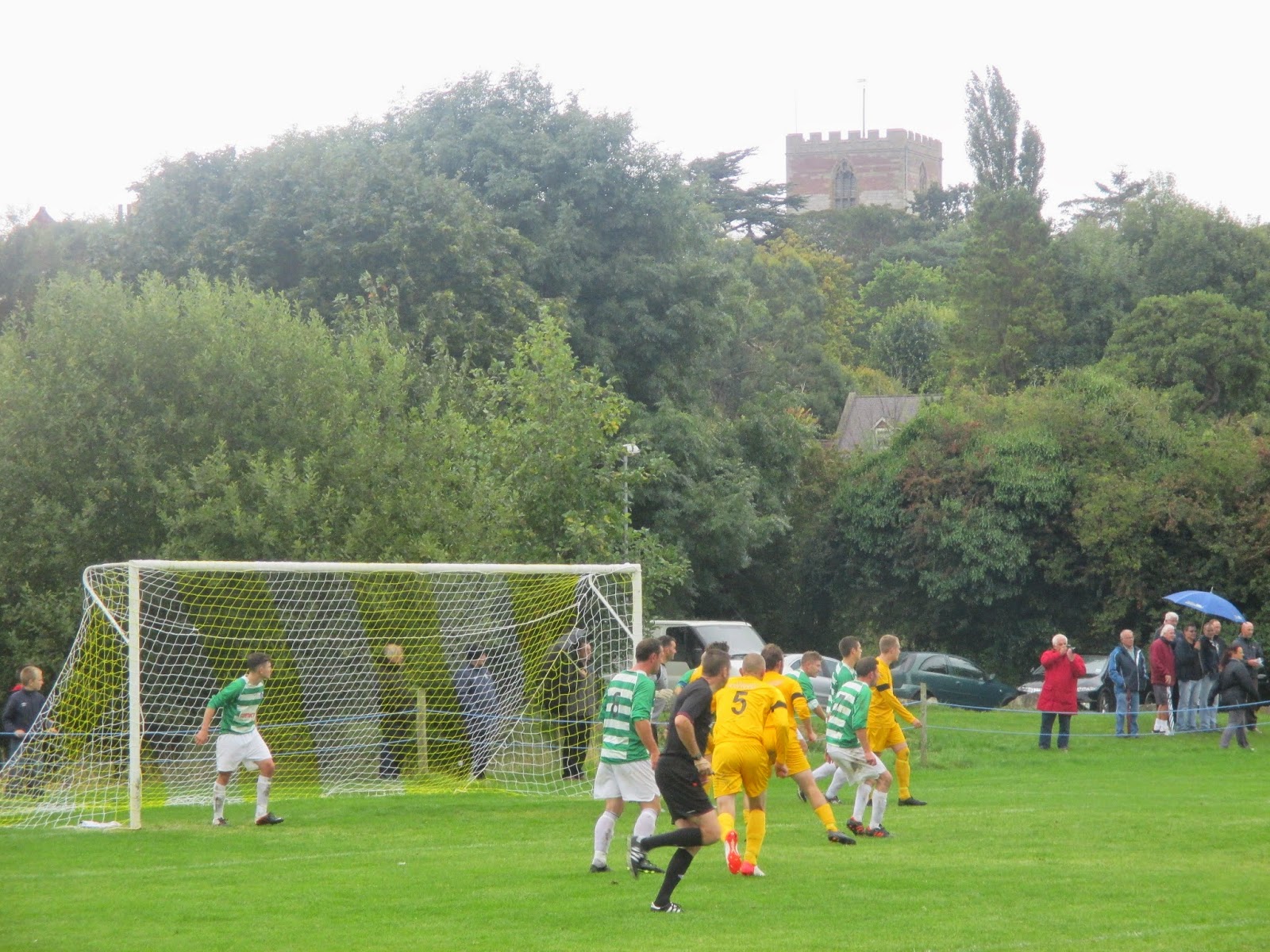 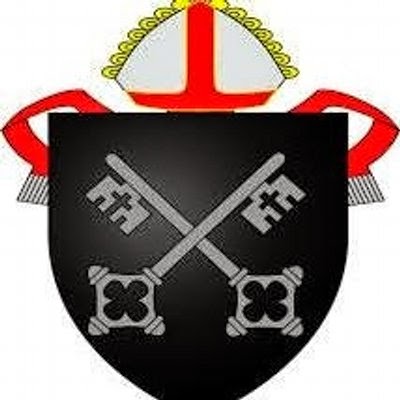 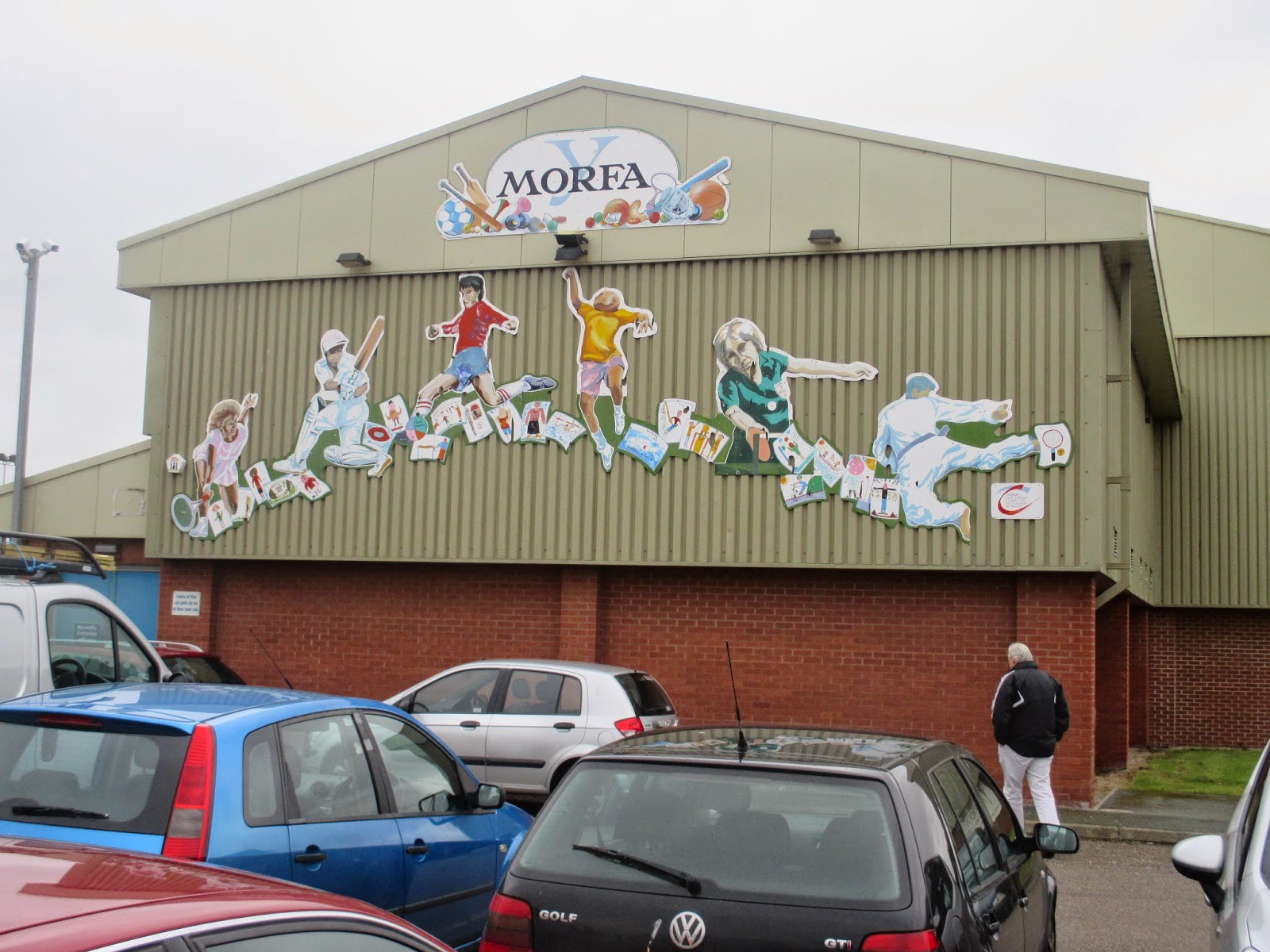 For our finally game and the last of ten matches over the Welsh Hop weekend, we headed up to the coast to Kinmel Bay (Welsh: Bae Cinmel) in Conwy county borough, which is a suburb of Rhyl and lies across the River Clwyd in the neighbouring county of Denbighshire.
Kinmel Bay Sports FC is a relatively new club, originating from the relocation of Abergele Rovers in 2011. The club won the Clwyd League treble of league, cup and Challenge Cup two years running and joined the Welsh Alliance, where they won their first trophy at this level just last season in the Lock Stock League Cup.
Considering the atrocious conditions this was the best game of the day, so top marks to both teams for producing a good open contest. Glan Conwy raced into a two goal lead in the opening twenty minutes, the first through Richie Orme  who picked the ball up in midfield before racing in on goal and firing the ball under the ‘keepers body. The lead was doubled when Luke Fountain robbed the ball off a defender to run on and score, but the hosts halved the deficit on 32 minutes with a well taking free kick on the edge of the box by Kyle Luffman. The second half began with the heavy pissing rain, pissing everyone off, but an early goal by Ryan Woods, nodding in at the near post from a corner had the game all square at 2-2. The pitch held up well during the game and both teams continued to battle for the winning goal, but it wasn’t to be and overall a draw was a fair result. 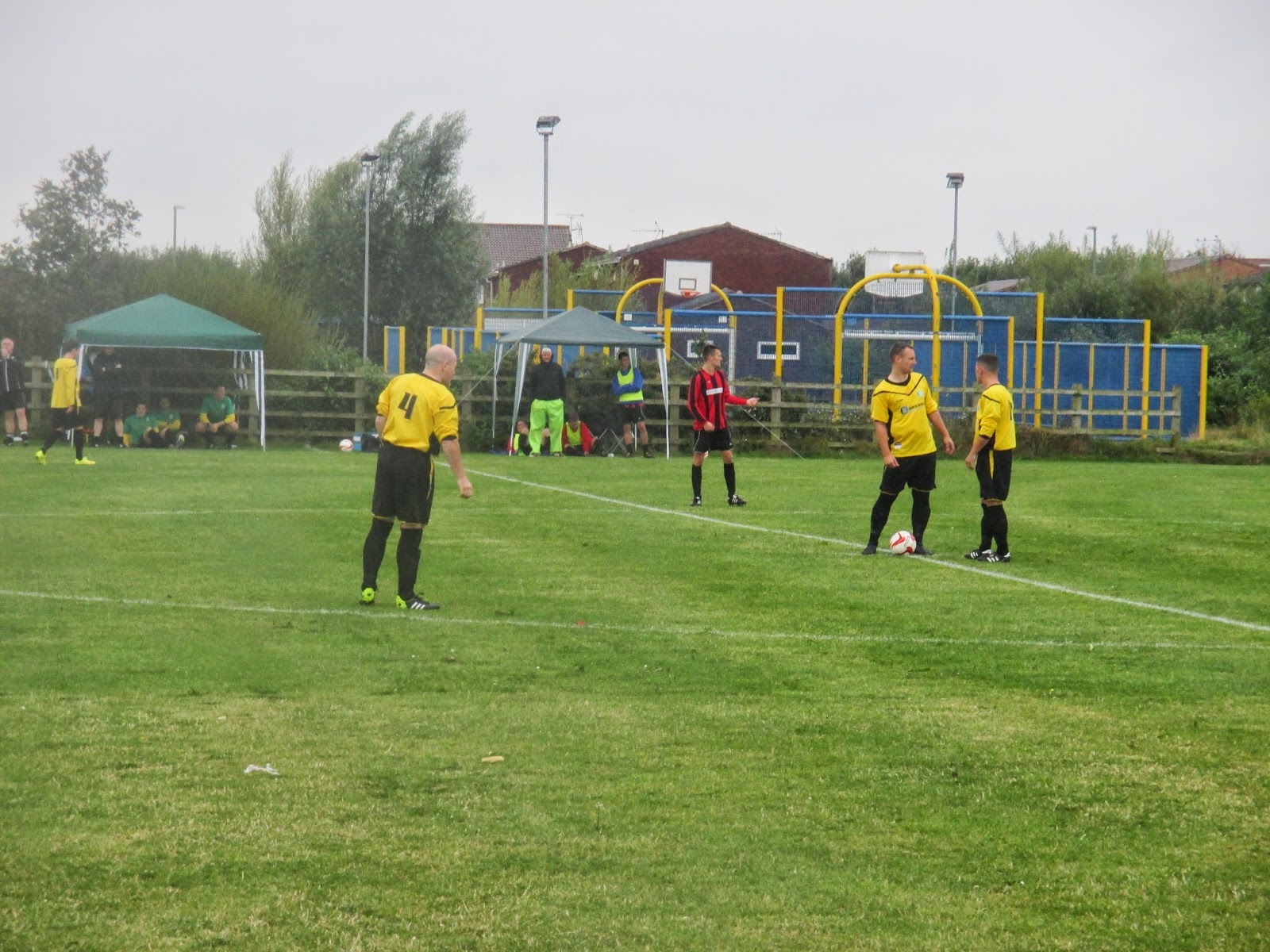 This game was actually postponed on Thursday due to a fall out between the club and the owners of the leisure centre over unauthorised improvements to the pitch. To cut a long story short the upshot is the match had to be played on another pitch, with the Welsh FA allowing the game to take place as long as cover was provided for subs and club staff. The lads at GroundhopUK had serious negotiations to get the game on with both sides in the debate acting like spoilt bairns. Laurence promises to spill the beans on this debacle, so keep an eye on his blog this week for the juicy details.
The main pitch at Y Morfa View Leisure Centre is behind the building, having wooden dugouts and is fully fenced off. Facilities for spectators is in the leisure centre with the food hall actually being in a sports hall with a food hatch and chairs provided. It’s a pity we didn’t have a basketball or a football on hand because the hoop nets and goals were there if anyone fancied a game. The second pitch used for the game was at the bottom end of the complex, where spectators were restricted to one side of the pitch, although some found an alternative dry haven, sheltered by trees, bushes or in Lee’s case in the neighboring kiddies playground inside the space rocket. 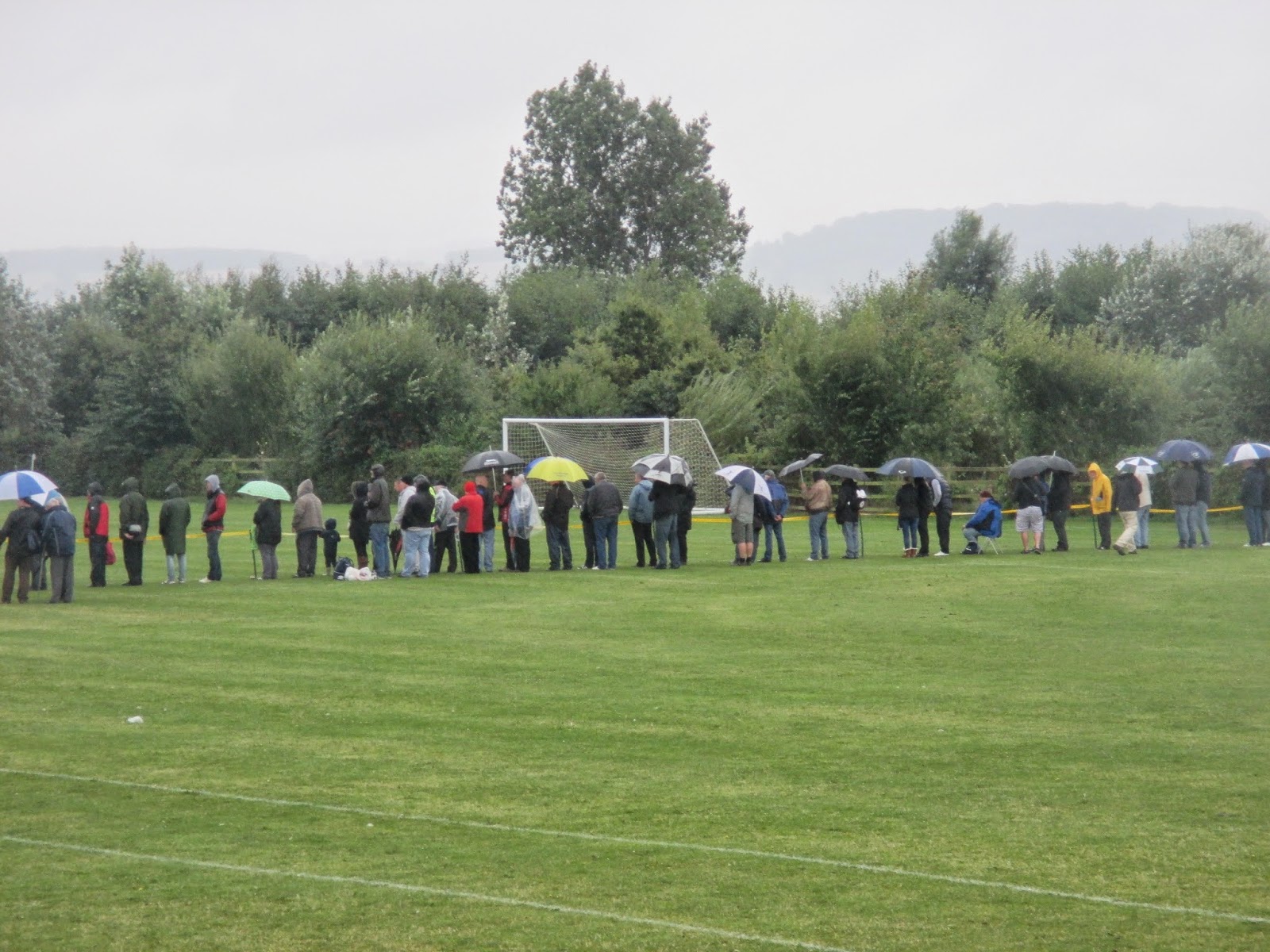 While its hard to fault any clubs hosting a groundhop game I have major issues with those at Kinmel Bay Sports. The main gripe being the half-time raffle. If anyone had never ever been to a non-league football match in their life and I asked them “when is a half-time raffle drawn?” you’d have to be as thick as pig-shit not to realise to answer is in the question. Near the end of the game we headed into the leisure centre to find out about the raffle and the football scratch card which we had also had our hard earned pennies on. The lad and the lasses who sold the tickets were nowhere to be seen.

I can fully comprehend the hard work GroundhopUK had to endure to provide a third match today. 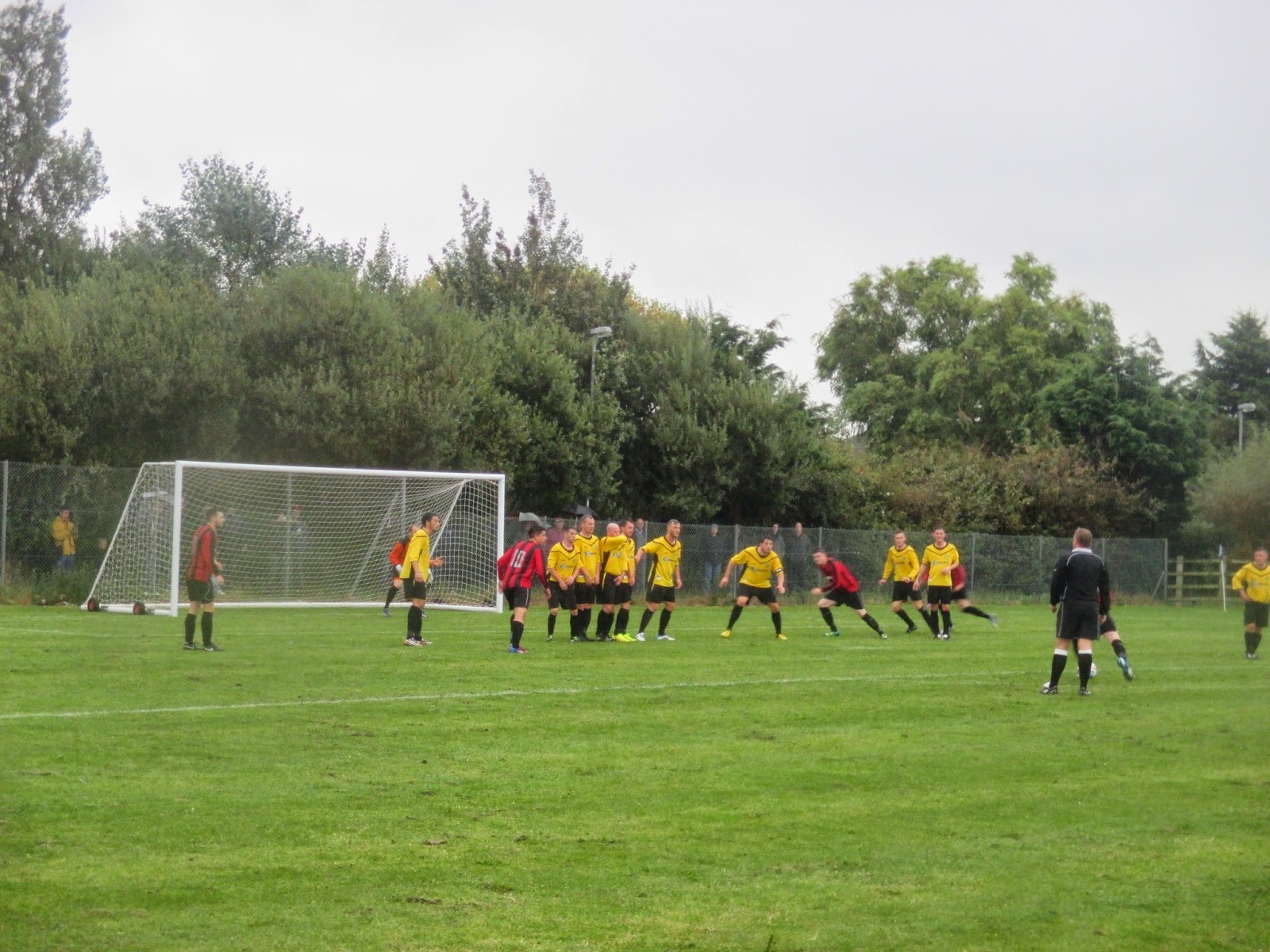 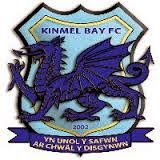 Due to my comedy sat nav, heavy rain,poor visibility, fog, 50 mile an hour stretches on the M62/A1 and dropping off Lee and Katie, I finally got home at 11.30. It was four and a half hours since we were at the match but my legs and feet we still soaking wet, so when I got home it was a hot bubble bath, cup of tea and a bottle of Old Peculiar in that order. It was a long eventful day where apart from getting soaked to the skin, being part of the greatest half time raffle rip-off and one of us getting stung in the eye by a wasp, it was quite an enjoyable day out in north Wales.

Paragraph deleted from article as requested on 30/10/14