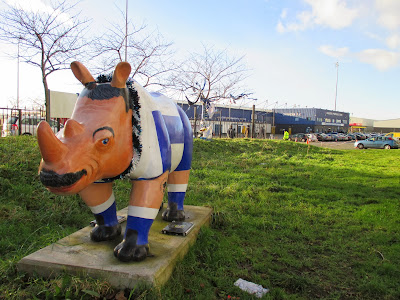 Football in Chester in the club’s current or former guise has invariably eluded me, missing out on visiting the Deva Stadium or their former home at Sealand Road. It wasn’t until the last August Bank Holiday that I finally spent some time by the banks of the River Dee, staying over for our wedding anniversary as me and the breadknife attended day three of the annual Welsh Hop.

Chester was founded as "castrum" with the name Deva Victrix in the year 79 by the Roman Legio II Adiutrix during the reign of the Emperor Vespasian, later becoming one of the main army bases and a major settlement in the Roman province of Britannia. When the Roman Empire fell 300 years later, Romano-British established a number of small kingdoms in its place, the town becoming part of the Kingdom of Powys.
Chester was granted city status in 1541 and remains one of the most picturesque settings in the UK with a number of medieval buildings and fine examples of Victorian architecture with the likes of Chester Town Hall and the Grosvenor Museum. Another landmark is the Grade I listed city walls, which are the most complete in Britain, surrounding the bounds of the medieval city for almost 2 miles. 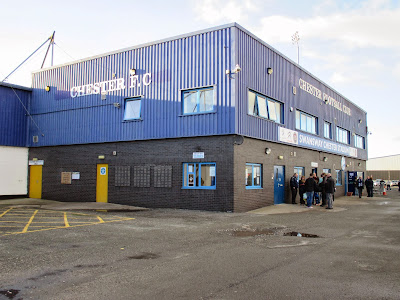 The original club was founded as an amalgamation of Chester Rovers and Old King's Scholars F.C. in 1885, initially playing home matches at Faulkner Street. The club moved to Sealand Road in 1906 before joining the Football League in 1931 and later adding the City suffix in 1983.

City were served a winding-up order by HM Revenue & Customs in January 2010 and also failed to fulfil their fixtures during the 2009–10 Conference season. The club were expelled from the league in February 2010 with all that season's results expunged, before being formally wound up the following month.
Chester FC were formed from the ashes in May 2010 by the clubs supporters. The new club were placed in the Northern Premier League Division One North for the 2010-11 season, where they won the first of three consecutive league championships, clinching the Northern Premier League and Conference North titles to return to the Conference this season. 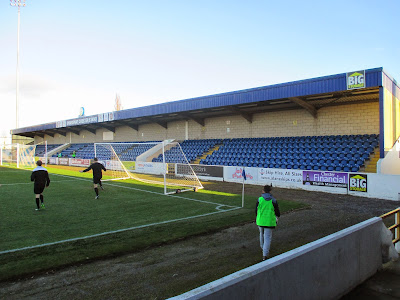 Chester moved into the Deva Stadium before the 1992-93 season. The move was announced in March 1990 when the club was taken over by new owners, who notified the sale of Sealand Road for redevelopment as a supermarket and plans for a new stadium at Bumpers Lane.The ground closed at the end of the 1989-90 season and the club spent the next two seasons ground sharing with Cheshire neighbours Macclesfield Town. Despite playing 40 miles away  in front of small crowds at Moss Rose, City survived the drop from Division Three, so they moved into their new home as a Football League club.

The site on Bumpers Lane was part of an industrial estate which lead to a council tip by the banks of the River Dee. Construction of the new stadium began in January 1992 and on completion seven months later, became the first English football stadium to fulfil the safety recommendations set out from the Taylor Report. The ground falls over the Welsh border with the car park and the offices at the main entrance in England.

The Deva was officially opened on the 24th August 1992 by Morys Bruce, 4th Baron Aberdare and hosted its first match the next day when Chester City lost 2-1 to Stockport County in a League Cup tie.The first match at the stadium for the phoenix club was a 3-0 victory over Aberystwyth Town on the 24th July 2010.
The stadium has a capacity of 5,300, the only change made since its construction being the conversation of the south away terrace to seats, which cut the capacity from the initial 6,012. There is still terracing behind the north goal, renamed in December 2006 after former manager Harry McNally. The main stand is on the east side which has a single tier of blue seats split into eight blocks, similar to the west stand, of which both stands have a capacity of approximately 2,100. There are narrow floodlight masts in each corner which makes the ground a bit easier to spot amongst the busy industrial area and retail shopping park. 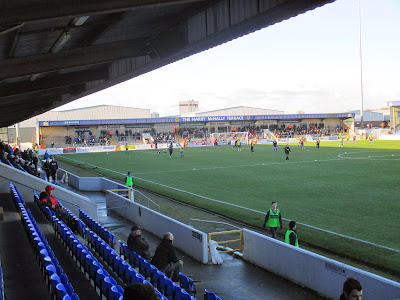 Chester went into this match with a solidary  home win this season plus six draws and four defeats from their opening 11 fixtures, so I expected Gateshead to come away with the three points, but knowing the Heed like I do, the Cestrians were more than likely to double their home win tally.
This prediction looked a strong possibility when Chester took a 10th minute lead when a John Rooney free-kick from the left found Ross Killock to head home unchallenged from six-yards. The hosts worked hard to maintain their advantage while the Heed played the usual good possession football but without the killer end product.

Gateshead made positive changes to try and save the game and should have equalise on 52 minutes when a Liam Hatch effort was headed off the line. Just as it was beginning to look like it was going to be  one of those days the Heed got the breakthrough on 68 minutes. A ball over the top from Hatch found James Marwood free on the right, who raced through on goal and produced a good finish inside Danby’s far post. Both teams pushed for a winner but in the end a draw was a fair result, although the management and supporters of both clubs won’t be satisfied with a share of the spoils. 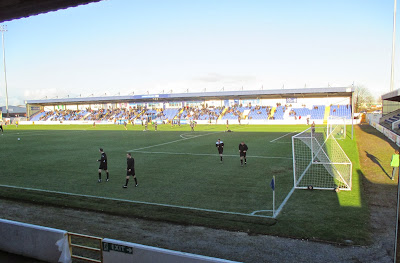 My main ground bagging pursuit this season is to do the four Conference grounds needed to complete the top 5 leagues and the 116 clubs. The first of those four was the “short trip” to  Chester, which is 180 miles, but not too far when compared with Welling, Barnet and Salisbury. My quest was nearly a non-starter as I struggled to seek transport to Cheshire until finding a car seat courtesy of former Heed kitman Tommy Doleman, who arranged to picked me up at 10.15. Apart from heavy traffic on the M6 the journey went smoothly so we pulled up in the stadium car-park just before 2pm.

The first thing that struck me on arrival was the horrible stench in the air. I don’t know where it stemmed from but the aroma was certainly lingering only on the Welsh side of the border. I had time for a pint in The Blues Bar which is situated behind the main stand, but had to cough up a quid for for the pleasure. I said to the lady on the door that if I’ve got to pay to get in then I hoped the beer was cheap, she boasted “It’s £2.70 for lager and £2.60 for bitter” as if this was the response I was hoping for.
Many thanks to Tommy for the lift and fellow passengers Geoff and Mark for being good company, plus it was good to meet up with 100FgC Squad#64 Richard Panter who travelled across from Leicester to watch the match with me. Overall a decent day out when my only regret was not buying one of the club’s raffle tickets where the first prize wasn’t a bottle of plonk, or a tray of frozen meat products, or not even a Chester home jersey, in fact if you had a 100 goes you’d never guess. The lucky winning ticket won a haircut! I don’t know who the fortunate winner is but I do hope it wasn’t someone with a shining baldy nappa! 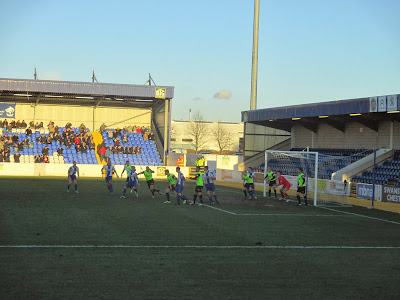 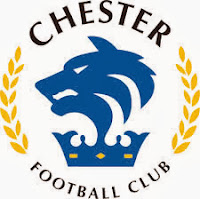