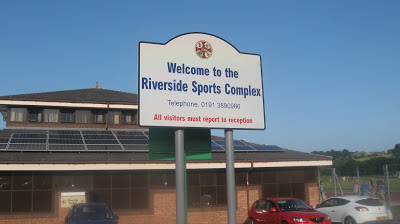 This summers close season break followed a familiar pattern to previous years. As the final chapter of season 2012-13 came to a close I was looking forward to some time out from writing, traveling and of course, watching 22 hairy arsed blokes running around chasing the hide of a cows backside for an hour and a half.
However as is usually the case, within a fortnight I was missing the beautiful game, trawling the world wobbly web in search of pre-season friendlies, mostly sniffing around Non-League Matters and Non-League Zone for news of forthcoming matches to note into the diary.
There are some fellow travellers in the 100Fg FanClub Facebook Group who have watched football all summer, but as far as I'm concerned the rest has done me good and now that I’ve had time to recharged my Groundhopping batteries, I’m keenly looking forward to sharing my 2013-14 travels with my half a dozen or so loyal readers.
This season I have no major plans apart from finally grabbing Newport(and it’s 4 JD ‘Spoons) hopefully finishing the Conference (instead of falling one short again) visiting a few grounds in Yorkshire and some more favourable trips north of the border.
My new campaign got underway last Saturday as I saw my hometown club take on one of my favourite clubs north of the border, as Gateshead beat Patrick Thistle 2-1 in Durham City.
Last night I had an early chance to see two clubs that I take a keen interest in, as Leam Rangers and Dunston UTS share four goals between them in an entertaining friendly, which leads nicely onto my third game, and more importantly - my first new ground of the season. 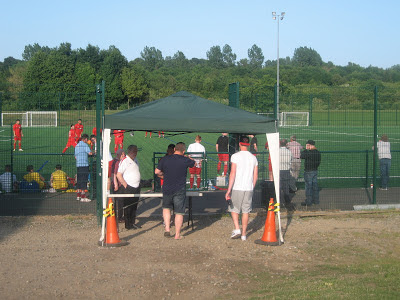 Consett vacated Belle Vue at the close of last season and will take up residence at their new home in Delves Lane at the beginning of October. In the meantime their opening 13 Northern League fixtures are away from home, cup games are to be played at Durham and their pre-season schedule includes three matches at the Riverside Leisure Complex.
The ground is adjacent to the Emirates Durham ICG in Chester-le-Street, the Riverside gearing up to host Ashes cricket for the first time this summer. As well as having four football pitches the complex also has a floodlit 6 lane running track, two rugby pitches, an indoor cricket centre, plus tennis courts, bowling green and a skate park. My only previous visit to the ground was when Newcastle United hired the facilities as a training base when I used to go autograph hunting, but even then we weren't allowed inside, so this is my first proper visit to the headquarters of the Durham FA. 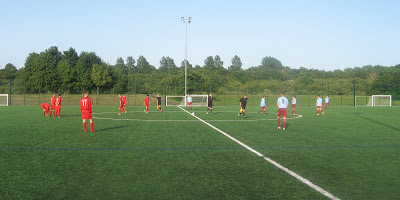 The match with Wearside League club Annfield Plain took place on the 3G pitch, which is fully enclosed with three floodlight pylons at each side. As I approached the ground I was greeted at the entrance gate by two committee members from Consett standing under a gazebo with a table and a bucket combination to collect admission. The club charged £2 for the privilege which 32 of us (including Squad #138 Lee Stewart) willingly paid, whilst another twenty odd tight fisted gets watched the match from the outer perimeter.
The two divisions gap between the clubs was evident as Consett raced into a two goal lead with goals from Sullivan and MacKay in the opening 18 minutes, but Heslop halved the arrears within five minutes as Annfield began to make a decent fist of it. 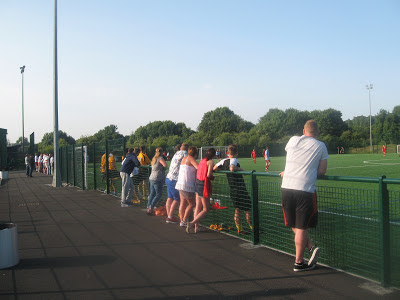 At the interval Plain fielded a different starting XI for the second half, all players kitted out in a changed strip of yellow shirts and black shorts from the traditional claret and blue combination in the opening period. Unfortunately the second half side didn't fair much better as Burnicel extended the lead just past the hour mark, netting home the rebound after his initial penalty was saved. Consett continued to boss the later stages and went further ahead through Cuthbertson on 74 minutes before a second goal for Burnicel, his far post header the pick of the Steelmens nap hand.
The Riverside Complex was a hive of activity on the night, with all the other facilities in full use. I was pleased to have seen a game here and there's another opportunity for ground baggers to visit this venue when Consett entertain Jarrow Roofing on the 3rd of August. 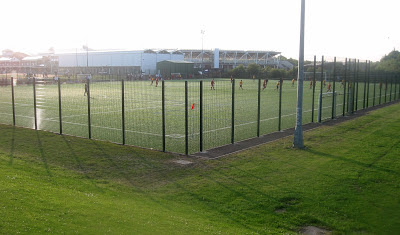 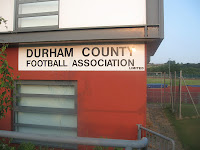