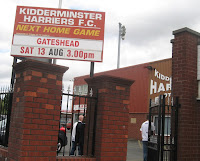 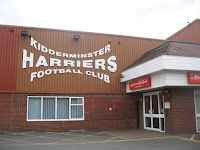 Aggborough is a ground that has somehow eluded me, having failed to visit in the club’s Football League days, as well as the last two season in which Gateshead have been in the Conference. I only need five grounds to complete the Conference set and its good to get one of those ticked-off straight away on the opening day of the season.

I travelled by coach with the GFC Supporters Club, departing from the Civic Centre at 8am. Kidderminster is a town in the Wyre Forest district of Worcestershire, located between the cities of Birmingham and Worcester. The journey went smoothly and without a hitch, arriving in good time at 12.40pm 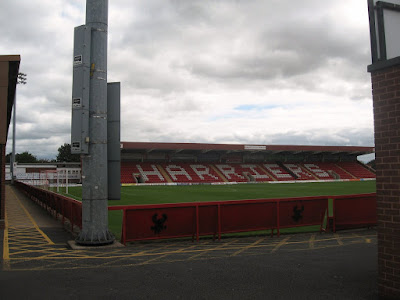 Kidderminster Harriers kick off the new campaign at home to Gateshead in a season which marks the club’s 125th anniversary.
The Club's origins began as an Athletics club in 1877 before switching to rugby in 1880 becoming Kidderminster Harriers and Football Club, before converting to association football and became professional in the autumn of 1886.
The club initially ground shared Aggborough with local Birmingham & District League rivals - Kidderminster Olympic, until the clubs amalgamated, joining the newly formed Midland League in 1891.
They only lasted as a fully professional club for one season, resigning from the league and folding before reforming the following season as Kidderminster Harriers F.C.
Harriers won their first title in the Birmingham & District League in 1938-39, gaining promotion to the Southern League, but progress was halted due to the outbreak of WW2. The club again won promotion in 1948, playing in the Southern League until the turn of the 1960’s, a decade which was their most successful era, winning the West Midlands League on four occasions and finishing runners-up twice.
They again returned to the Southern League from 1972 until a second place finish in 1982-83 saw the club join the Alliance Premier.(Conference) In 1987 Harriers made their first of three visits to Wembley in the FA Trophy final beating Burton Albion after a replay and finished runners-up in 1991 and 1995. 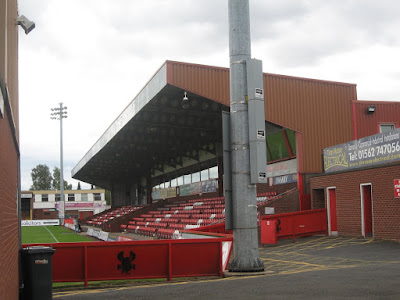 Aggborough opened in May 1890 when the recent amalgamated club played Walsall, at the time the ground was oval shaped with a wooden stand with a banked athletics track and held a good 15,000 supporters.
A Corrugated iron shed was built in the 1920’s, known as the Cowshed, and a 460 seated grandstand opened in 1935, the stand roof later extended to cover a concrete terrace.
The ground was one of the first in the country to host a floodlit match with a game against Aston Villa in December 1951 and on 14th September 1955 became the first to host an FA Cup tie under lights when Harriers played Brierley Hill Alliance in a preliminary round replay, winning 4-2.
A new system was installed in the mid-sixties and a new covered terrace was erected in 1979, the Bill Greaves Memorial Stand replaced the cowshed which was damaged in a gale, the stand named in honour of their late chairman.
In 1983 further improvements to the terracing, updated floodlights and the ground squared off replacing its oval shape in preparation for the Harriers step up to the Alliance Premier League.

The 1993-94 season was an eventful one for Harriers both on and off the pitch, progressing to the 5th round of the FA Cup, knocking out Birmingham City and Preston before losing to West Ham United by a solitary goal at Aggborough. The Conference title was won for the first time but promotion to the Football League was denied due to problems with the main stand which was deemed as unsafe.
The following year the main stand was replaced with a covered single tier all seated Reynolds Stand, which is filled with red seats with ten executive boxes at the back. The rear of the stand incorporates the Aggborough Suite, club shop and supporters pub The Harriers Arms.
The ground had been upgraded to Football League standards with the stand, new club entrance and souvenir shop meant when a second Conference title was achieved six years later they took their rightful place amongst the 92, be it short lived, returning to non-league five years later.
The Bill Greaves Terrace was redeveloped as an all-seated stand in 2003. The East Stand is a basic single tier block of red seats with HARRIERS picked out in white, which takes the seating capacity up to 3,140.
There is matching covered terracing behind each goal, with the only difference being that the away end on the south terrace has an electric scoreboard perched on the roof. The overall capacity stands at 6,238 with the record attendance standing at 9,155 against Hereford on 27th November 1948 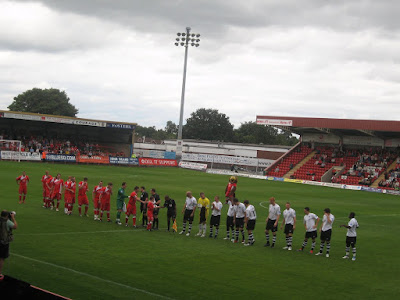 Gateshead started the season with an impressive victory in an entertaining encounter at Aggborough.
The Heed got off to a dream start when Gate was fouled on the edge of the box, the resulting Cummings free kick was handled by Storer and Jon Shaw made no mistake with the spot-kick, nonchalantly chipping the keeper to give the visitors a 3rd minute lead.
Gateshead doubled their lead when a cross from Odhiambo found Cummins in acres of space to nod home, but the lead was halved a minute later when a neat move was started and finished by Harriers man of the match Nick Wright on 20 minutes.
Kiddy pressed for an equaliser and made it all square five minutes later, a corner kick was met with a firm head by Kyle Storer making amends for his earlier handball error.
After an open first half both sides closed ranks in the second period. The match looked to be heading for a draw until ten minutes from time, when a low hard cross by Odhiambo was turned in by Kris Gate, which sent the 53 Heed Army fans behind the goal into raptures.
Jamille Matt had a great opportunity to grab an equaliser deep into injury time, but The Tynesiders held on to gain a well earned victory and a great start to the new season. 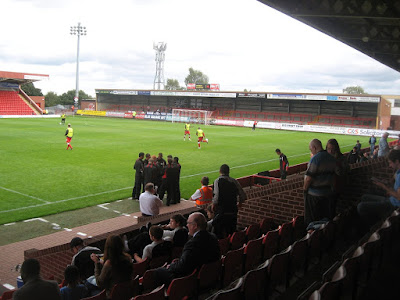 What a superb matchday to start off the new season. Arriving at Aggborough early gave us plenty of time to explore the town’s hostelries and as always I was equipped with Google map and pub list. I led the Heed Army around the streets of Kidderminster like the pied piper of Gateshead, starting off in the excellent King and Castle. The pub is set within the Severn Valley Railway museum and is a recreation of a GWR refreshment room, which serves the specially brewed Wyre Piddle(3.9%)[3.5***] which is very nice and only £2 a pint.
Afterwards we headed over to the Boars Head and predictably checked out the local JDW - The Penny Black before heading back to Aggborough for the match.

Thanks to Squad #169 Captain Carter for supplying me with ale on the journey down and a special mention to our coach driver for getting us there and back in good time, arriving back in the Heed by 9.30pm.
As I’ve already stated a great day out, having a canny drink and a brilliant result, so what more could I ask for? Hopefully more of the same over the next nine months.

Good job you got that one in. Aggborough's lease runs out soon (I was told when I visited recently). Not sure which season it is, but looks like being their last, before possible extinction.