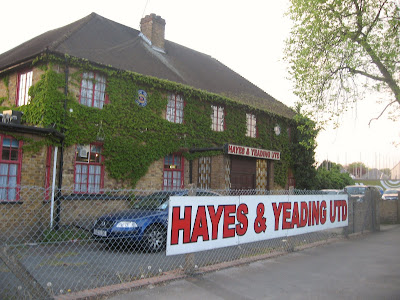 It’s exactly one calendar month since my original intended visit to Church Road. The re-jigging of the fixtures means that Gateshead FC now have the honour of being Hayes & Yeading’s last competitive opponents before the ground closes its gates for the final time after 91 years of football history. 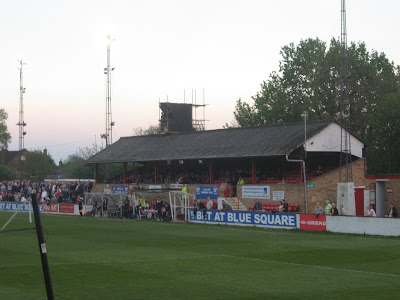 The history of the ground goes back to Botwell Mission, who originally played at the Coldharbour Lane enclosure on Botwell Common from their formation in 1908, until moving to new ground in 1920 on Church Road, which was then known as Cox’s Meadow.
In 1924 the club changed their name to Hayes FC and the following year saw the construction of the Main Stand, which has been in use ever since.
The stand sits on the half way line and has a capacity of 450 red seats with the classic design of a stand from this era, having raised seating with staircase access at the front and corrugated iron peaked roof. The only additional change to the stand is 50 extra seats added at the front behind the team dugouts, the club name on the gable end and a scaffold supported TV gantry on the roof.
Terracing replaced the standing banking after the Second World War with a roof added at the far side terrace. The Shed terrace is two-thirds covered and the rest of the ground is made up of terracing which sweeps around to meet both stands.
The capacity is 4,730 with the record attendance set in 1951 when 15,370 crammed into Church Road for an FA Amateur Cup tie against Bromley. 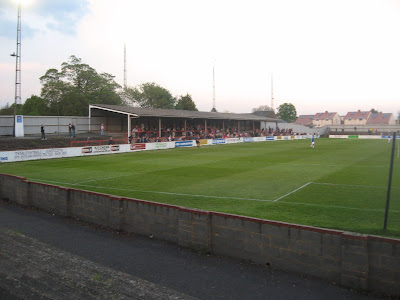 Hayes FC stepped up from the Athenian League to the Isthmian League in 1971. In 1995-96 they edged Enfield on goal difference to win the league title for the only time which saw the club spent six seasons in the Conference.
Hayes were placed in the newly formed Conference South after the reconstruction of the pyramid in 2004-05 and on the 18th May 2007 merged with former Isthmian League rivals Yeading FC.
Yeading FC formed as a youth side in 1960 and first played competitively in the London Spartan League. The club went on to win the Isthmian Premier in 2004-05 and played a solitary season in the Conference South before the two clubs became United.
I first became aware of Yeading when they drew Newcastle United in the 3rd Round of the FA Cup in 2005. The game was switched from The Warren to Loftus Road and I remember sitting watching the game at home feeling quite anxious after a goalless first half. United went on to win the game with two second half goals, however Toon fans will recall the game for the debut of Jean-Alain Boumsong, who had a nervous first game against players playing six divisions below the Premier League. 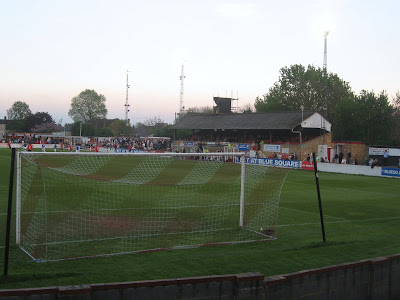 The final game turned out the be a perfect send off for the old ground, with a 3-1 victory over Gateshead securing Conference football for United next season.
Hayes & Yeading took an early lead when Bradley Pritchard got on the end of Peter Holmes's cross, producing a tidy finish from close range.
Five minutes after the break an Ashley Winn strike from the edge of the box, took a slight deflection for the equaliser as Gateshead began to get a foothold on the game.
Hayes substitute Ben Wright restored the advantage, with a header at the far post from a Holmes corner kick , before Lee Brown put the gloss on the performance with an injury-time penalty after Ben Clark fouled Andy Yiadom.
So the ideal finish for the hosts last ever game, the very last kick of the match and at Church Road was a goal. 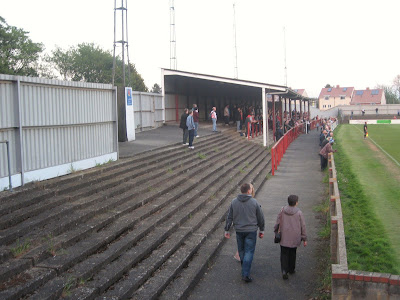 Four Heed fans, all four of us members of 100 FgC squad, but from this day forward we shall be known as “The Hayes & Yeading 4” being the only ones who made the long trip from Tyneside to Middlesex.
Torchey Travel set off on this long midweek jaunt at around 12.30pm. The “H&Y4” consisting of myself, Squad#51 Torchey, #37 MC Dean and #185 Simon Grobari. For the first leg of the journey I had the honour of driving the Torcheymobile, doing the first 200 mile stint, before our excursion guide took the wheel for the last bit of the journey.
We arrived in Hayes at 5.45pm and headed straight to the Botwell Inn on Coldharbour Lane. It was here that I arranged to finally, at long last, after all these years, meet up with one of the primary members of the 100FgC - squad#10 Tim Rigby, who is the author of the fabulous
Tims 92 Website.
Before the game we had time for a quick pint in the clubhouse, which must be one of the best social clubs in the league, not just inside but from the outside with its ivy covered front wall and a decent pint of John Smith’s to boot!
Once inside the ground I bumped into more of the100FgC team, squad#179 and Wycombe Wanderers fan Russell Cox, as well as “Barnet Boy” aka Squad#96 Tom Salinger. Caroline another Heed fan had travelled down by train and there was also two London based Geordie exiles in the ground, so if you include Tim as well, the Heed Army ranks swelled to nearly double figures!
This matchday wasn’t just another Heed away game, it was more about the last game at Church Road and I was pleased to be in attendance for such an occasion. I arrived back home at 3.30am, obviously very tired but it was well worth it when you consider that after the game both Gateshead manager Ian Bogie and his assistant Terry Mitchell, shook hands with the “H&Y4” and thanks each and every one of us for travelling down and supporting the team. It’s nice to be appreciated and it makes these long arduous trips worthwhile. 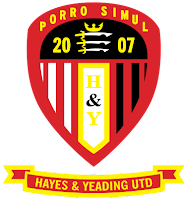 Additional info 20th April;
Woking Football Club can confirm that heads of terms were signed last week with Hayes & Yeading, regarding the sharing of our ground next season.

Subject to Conference approval, it is envisaged that the final agreement will be signed next week.

The Beaconsfield Road site should be ready sometime during next season.

Nice to meet you and Tim as well as my Hayes mate. I reckon they need more space for their club shop - somewhere the size of Tesco for all the stock they have!!

Can't understand why they are going all the way to Woking, surely Harrow Borough would have been big enough and a lot nearer

@ Russ, I believe that only Woking meets the A grade criteria for Blue Squere Bet Premier football. Had Hayes been relegated then there would have been more options - not sure about Harrow though, even for BSB South football. It may look OK but grading is a bit daft sometimes and things like turnstiles and number of urinals in the dressing rooms are also taken into consideration.

I hate to say it but I think the club will really suffer from having to play as far away as Woking, given their already small fanbase.

Once Church Road is vacated then funds will be released to complete redevelopment of The Warren. Let's hope it doesn't take too long. I can't help thinking that in the long run, relegation might have been the better thing. if it drags on ... although as an Eastbourne Borough supporter I would say that!

Nice review Shaun, and good to meet up with you and the other 'heed lads!

Hi Shaun,
I love your site - the write-ups are well done, and the photos are very good and it is on my blogroll now at Bill's Sports Maps under 'the100groundsclub'. When I saw that you included a video of The Fall on your recent Bury FC post, well, that sealed it.
Glad for you that the Heed will be back in the Conference next year, and hopefully my favorite Non-League club Forest Green Rovers will be too.
Thanks, Bill Turianski at http://billsportsmaps.com/

thanks very much Bill.
I've added your link.
Cheers!

Great of you to visit a classic ground on its final night. Appropriate that it was a Gateshead visit, but it's amazing you did the several hundred miles anyway. All the best from a Shayman.

Thanks for another great write-up and for introducing me to http://tims92.blogspot.com.

Great read, as always. Fair play for making that long journey! I was sad to hear of H&Y’s relatively recent announcement that they were to leave Church Road. I must echo Mr Bauckhams concern about the crowds they are likely to draw in at Woking. I’ve been to Chruch Road twice over the past two seasons to see Mansfield Town and on both occasions the attendance were record lows for MTFC 1st team matches. These levels will diminish even further when with home games 45 mins away.