Cowdenbeath 1v2 Falkirk
Scottish League Division 1
Saturday 16th April 2011
My initial attempt to visit Cowdenbeath this season coincided with the dawn of the rotten British winter on the last weekend in November. Then in February when the worst of the inclement weather was over I tried again, but was thwarted by a signal failure in Birtley delaying my train for over 70 minutes which meant I would have been lucky to catch the second half.
However it turned out to be third time lucky - a successful attempt in visiting Central Park as it‘s a “must tick” this season as the ground and surrounding area are part of a two-part redeveloped with the football club planning to relocate to a new purpose built community stadium; 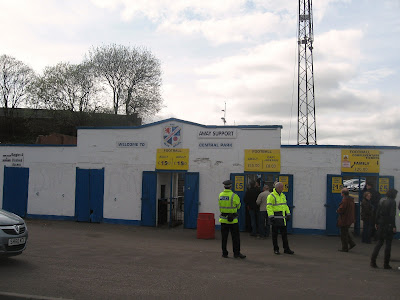 The Central Park area has been identified in the Fife Council's Mid Fife Local Plan as a key area for the physical and economic regeneration of Cowdenbeath. Following discussions with Fife Council and recent public consultation events, a formal application has now been submitted for planning permission for the redevelopment of the Central Park site, which would see the provision of a supermarket, small retail units and housing. The aim is to regenerate the area, create jobs and boost the local economy.

“Staying at Central Park in the long-term is not an option", said Donald Findlay QC, Chairman, Cowdenbeath Football Club. "Central Park has a proud history but, unfortunately, it no longer meets the needs of the football club while the running costs are extremely high. "The sustainable future of the Club is dependant on relocating to a purpose-built, low maintenance and income-generating-facility within Cowdenbeath. “This is a key part of our vision to see the Club continue to flourish on the field and acting as a hub for many community activities. The proposal would safeguard the future of the football club as a community asset and it would also ensure a positive legacy from the redevelopment of Central Park for the people of Cowdenbeath." (source http://www.cowdenbeathfc.com) 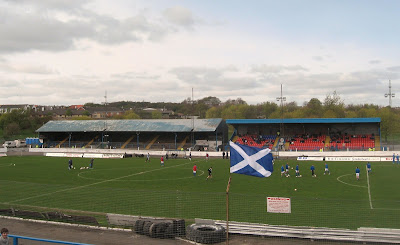 The development would generate the finance for the new stadium, with plans for a site in the Broad Street area of the town which is the favoured location of the football club and Fife Council. The club are encouraging the Cowdenbeath public to back the proposal and sign the petition at the ground or use the online petition.

Cowdenbeath lies in south-west Fife, 18 miles north of Edinburgh. The burgh built up from the mid-19th century through coal mining as flourishing coal pits were sunk in the surrounding areas, which established the town as a central headquarters for Fife mining.

The oldest football club within the Kingdom of Fife, formed around 1881 joining the Scottish League in 1905, going on to win the second division title in 1914 and 1915. In those days there was no automatic promotion between the two divisions, with promotion decided on a voting system. The east of Scotland based clubs felt hard done by, with promotion constantly denied in favour of the western clubs. Cowdenbeath were amongst several eastern clubs to quit the Scottish Football League and form the 'rebel' Central League which proved to be highly successful.

Cowdenbeath moved to Central Park when it was opened in 1917, having originally played at North End Park. The Main Stand was built in 1921, to coincide with the Central League clubs rejoined the Scottish League, after decided to introduce promotion and relegation between the two divisions.

The Blue Brazil aren’t blessed with a roll of honours, they won the Second Division for a third time in 1938-39 and their last appearance in the top flight of Scottish football was a solitary season in 1970-71, after winning promotion when finishing second to Falkirk the previous year. 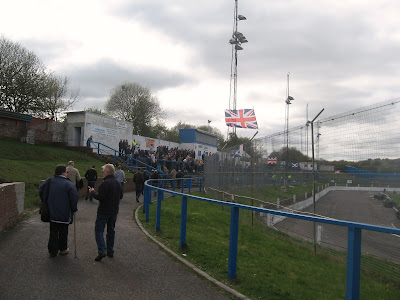 The ground is in the town centre behind the High Street and a handy five minute walk from the train station. The Main Stand is two separate structures. The old West Stand originally had a capacity of 3,000, until falling victim to arson in 1985, with half the stand destroyed by another fire in 1992. The stand is filled with benches and has a few supporting pillars and a peaked roof. The clubs noisiest fans are housed towards the west goal and at the opposite side is the press box.

The Alex Menzie Stand opened in March 1995 and includes dressing rooms, board room, function suite, club offices and boardroom. The basic looking stand is split into three sections of red seats, the combined total seating capacity of both stands is 1,622 and the overall capacity is 5,268. Central Park is more famous for the tarmac oval circuit which circles the pitch, which was formerly used for greyhounds and speedway and regularly hosts stock car racing.

Racewall Cowdenbeath stage various championships in each formula, with a Scottish championship and also many other World, European, British & National Championships. This means fans on the east and west terraces are quite far away from the pitch with meshed safety fence somewhat spoiling the view, so quite a few fans stand at the top end next to the West Terrace turnstile.

The South Terrace stands central, flanked by grass banking which continues around to the east side. The turnstiles are next to the main stands so visiting supporters have to walk around to the far terrace. The record attendance at Central Park stands at 25,586 for a League Cup quarter final tie with Rangers on 21st September 1949. 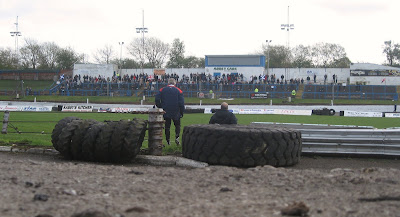 Falkirk hit back from a goal deficit at half time to win at Central Park with two second half goals, which leaves Cowden second bottom of the First Division. The Blue Brazil took the lead after 32 minutes when Greg Stewart converted Lewis Coult's cross, taking the ball on his chest before producing a splendid finish.

Falkirk hit back from a goal deficit at half time to win at Central Park, leaving Cowden second bottom of the First Division. The Blue Brazil took the lead after 32 minutes when Greg Stewart converted Lewis Coult's cross, taking the ball on his chest before producing a splendid finish.

The hosts could have double their lead ten minutes after the restart when a Robertson header was somehow pawed away by the keeper but Falkirk drew level 20 minutes into the second half through Mark Stewart. His initial header produced a fine save from Cowden keeper Roy, but from the resulting corner he pounced onto a flick to nod home from close range. Four minutes later the visitors grabbed the winner when Brian McLean lost his marker and finish with a strong header at the far post from Mark Millar's free kick as Falkirk comfortably held on to take maximum points. 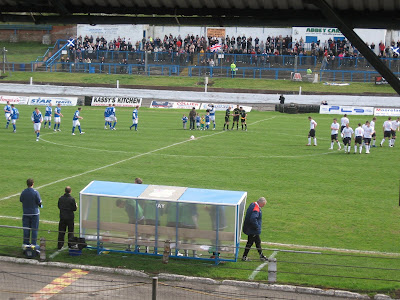 My lifetime pursuit of finishing ‘The 92’ has dominated this seasons ground hopping adventures which has meant neglecting my favourable trips to Scotland. I always feel at home north of the border, maybe that’s because our Scottish friends are basically Geordies but with their brains bashed in (Is that not vice-versa?…Eddy)

Travelling to Cowdenbeath by train doesn’t take too long. I caught the 1203 which was behind schedule, as you could imagine this caused a bit anxiety on my part, but I needn’t have worried as the train was only 12 minutes late and travelled none stop to Edinburgh. On arrival I caught my connection train towards Glenrothes, reaching my destination at 230pm.

I had time for a drink after the game so made a bee-line to the highly recommended New Goth bar. Looking at the pub from the outside I wasn't too sure whether or not to go inside, the building was dropping to bits and looks in need of a complete face lift. I had a choice of either standing on the train station platform for half an hour or going inside, so I obviously did the latter and was pleasantly surprised to find a nice friendly pub, nice décor, spotless and nothing like I imagined it would be. The Goth have McEwans 80 shilling on draught, a beer which I haven’t supped since the 1980’s. The pint was top quality though, in the same class as the scotch pie I had at the match at half time.

Afterwards I made use of my spare hour in Edinburgh to watch the Manchester derby at Wembley on the pub TV. It was good timing as I caught the decisive moment in the game which booked City a place in the FA Cup Final, and I was quite amazed being the only person in the packed pub to punch the air with glee when the goal was scored. I thought everyone hated Man Yoo!

So Cowdenbeath is finally done and it’s been well worth the wait. The day went smoothly, I loved Central Park’s uniqueness and everyone I spoke to was very hospitable, but I wouldn't have expected anything less from our Scottish cousins. This is why I always enjoy my matchdays in Scotland and I’ll be looking forward to my next trek into Northern Britain, where and whenever that may be. 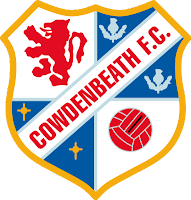 Glad to see they still have those enormous tyres Shaun