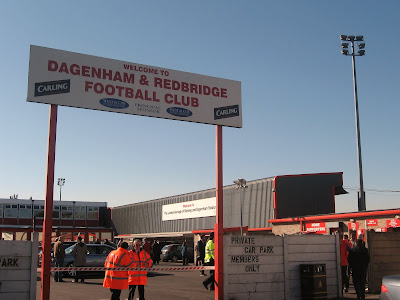 My latest trip to the capital was intended as another Gateshead away fixture at Hayes & Yeading, but due to the Heed’s progress in the FA Trophy the match was postponed.
Luckily my train tickets didn’t go to waste, heading over to the opposite end of the smoke to the east end of London to tick off Dagenham & Redbridge’s Victoria Road ground.

Dagenham is a large suburb which forms part of the London Borough of Barking and Dagenham, located 12 miles east of Charing Cross.
It was historically a farming village, which remained undeveloped until 1921 when the London County Council began constructing the large Becontree estate. The population greatly increased during the 20th century, becoming primarily a residential area forming part of Greater London since 1965.
The location is also home to the Ford Dagenham assembly plant, which opened in 1931

and has produced almost 11 million cars and 37 million engines in its history.
However, my previous knowledge of Dagenham is through my good taste in music, with two songs titled ‘Dagenham Dave’ one from The Stranglers which appeared on the 1977 album No More Heroes, which is a tribute to one of the groups original fans who committed suicide by jumping off Tower Bridge into the Thames.
The other from Morrissey from the album Southpaw Grammar, which was also released as a single in 1995(which I also bought) and has a flattering picture of a young Terry Vegetables on the picture cover. 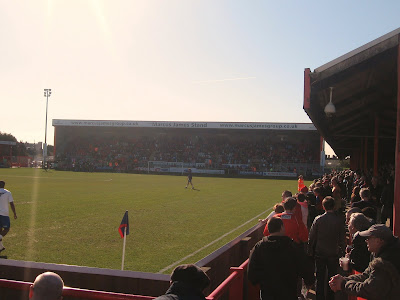 Your more likely to find out about the formation of Dagenham & Redbridge FC on ancestry.com, a long family tree which dates back to four amateur clubs - Ilford (formed in 1881), Leytonstone (1886), Walthamstow Avenue (1900) and Dagenham (1949). Leytonstone were the most successful of those clubs, winning the FA Amateur Cup on three occasions and the Isthmian League nine times.
Illford and Leytonstone merged in 1979, becoming Leytonstone Ilford, and took over struggling Walthamstow Avenue in 1988, renamed as Redbridge Forest in the summer of 1989.
Redbridge Forest won promotion to the Conference in 1991 before merging with Dagenham the following year to become Dagenham & Redbridge, winning promotion to the Football League in 2006-07. 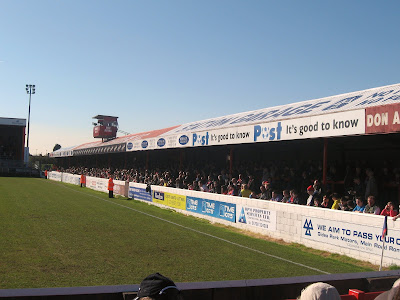 The Victoria Road site has been a football ground since 1917, when originally used by the neighbouring factory side Sterling Works, however it was Brigg Sports formed in 1934, who played at the ground until moving to Rush Green Road in 1955. The ground became fully enclosed when Dagenham FC took over, moving from the Dagenham Arena situated within Old Dagenham Park.
Ground improvements were made through the remainder of the decade, with a newly laid pitch, turnstile block, toilets, extension to the terrace banking and the main stand opened in January 1956. Floodlights were switched on for an FA Youth Cup tie with Woodford in September 1957 and the following year more cover was added at the far side terrace at a cost of £1,400.

The ground was regularly maintained with major improvements coming over the last 20 years to coincide with the tenants ambitions to progress, rising from the Isthmian to the Football League.
Currently known as The London Borough of Barking & Dagenham Stadium,(Bit of a gob full!)the Main Stand was built in 2001 and has a seating capacity of 800. Now known as the Carling Stand, the small tier of red and blue seats are set above pitch level with staircase entry via the front gangway with the team dugouts in front.
Next to the this is the small covered Barking College Family Stand which was build to increase the overall capacity which allowed Redbridge Forest promotion to the Conference. The stand has a block of 200 seats with access gained at the front.
Opposite is the North Terrace which is fondly known as “The Sieve” and even on a glorious day like today there was still water leaking from its ceiling. The terrace is fully covered with a TV gantry perched on the red roof, which has the club name embossed in large white capital letters.
Turnstile entrance to the North Terrace is via the open Bury Road End terrace, which gives the option of either viewing the match from behind the goal or in the paddock. The Bury Road End also has an electric scoreboard and police control box.
The most recent development is the Marcus James Stand which replaced the Pondefield Road open terrace. The all seated stand has a capacity of 1,200 and was opened during the 2009-10 season. The away end has a block of red seats with DAGGERS boldly standing out in white and the players emerge from under the stand.
The ground has four corner floodlights which replaced the original eight floodlights during the summer of 2001 and has a current capacity of 6,078, with a record attendance of 7,200, for an FA Cup tie with Reading in 1967. 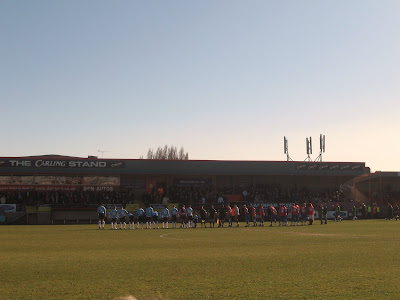 Dagenham & Redbridge’s recent run of good form continued with a convincing win over a lacklustre Charlton side.
Jon Nurse put the home side ahead on 33 minutes with a well placed effort from just outside the box and could have gone further ahead, but were twice denied by good saves by Ross Worner, which lead to a chorus of boos from the away end at half time.
Dagenham continued to improve in the second half, doubling the score on 55 minutes when a Damian Scannell cross found Danny Green who fired into the top corner.
The visitors scored a late consolation with a close range effort from Frank Nouble, but The Daggers held out for a deserved win, which improved their hopes of staying up, while Charlton must be one of the poorest sides I’ve seen this season. 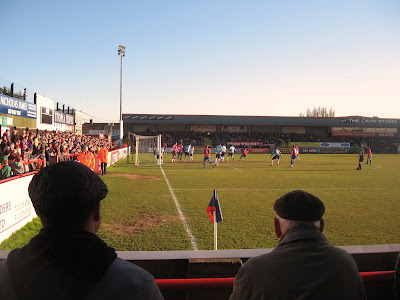 Glorious sunshine greeted my arrival in London, then my good mood soon diminished with the news that the District Line was closed which meant I had to plan an alternative route to reach my final destination. This surely can’t be a coincidence. Every time I come down here they mess up my strategy. London transport must look at my ‘Possibles and Probables’on this website then decide THAT is where the line closure shall take place this week.
On my way south I plugged in my laptop on the train to use my 15 minutes of free wi-fi time. (Aye, that’s right. Bliddy a quarter of an hour! Should be free, never mind charging £4.95 an hour, the amount of money I spend on train tickets etc..rant..etc) to quickly (you have to be quick you’ve only got 15 minutes) check the news, my emails, friendface, twatter etc.
I received a message via friendface from Squad #67 James Durnford who was also in London, heading to a game at Metropolitan Police, so we arranged to meet up for a drink in The Tyburn on Edgeware Road, as I always welcome the chance to meet up with one of the 100FgC squad for a bevvy.
I had other plans while I was in the capital, which I had to abandon knowing I had the dreaded prospect of the bus replacement service( should it not be train replacement service?) so I caught the tube from Marble Arch to Bank and had a quick pint in the quite impressive JDW pub The Crosse Keys, before catching the train from Fenchurch Street to Barking.
I arrived at Barking at around 1.30pm. I asked the nice bus conductor lady how frequent the buses are and the duration of the four stop journey, which then gave sufficient time to spend in The Barking Dog, a Wetherspoons pub next to the bus stop which was already serving ales from the latest beer festival which starts later this week.
In typical comedy farce fashion of my recent travelling experiences, I had to end up with a bus driver who didn’t know where he was going, following the bus route with a map on his knee. The driver got lost and started to go the wrong way until a young lass marked his card, telling him that he’s supposed to go to Upney, which he then corrected with a swift U-turn on the main road. (London transport!! You don’t get this sort of carry on with Go Ahead Northern…Eddy)

I arrived at Victoria Road at 2.30pm and on the whole was really impressed with the set up at Dagenham. I noticed a lot of West Ham shirts in the crowd so Dagenham based Hammers fans are still turning out to support their local team, which is good to see.
The club still maintain their non-league ethos, being a community club who haven’t got too big for their boots since becoming a League club, plus more importantly, where else in League One or if fact, in the south-east of England, could you be adequately fed and watered for under a fiver!
A good day was spoiled by football news elsewhere. I’ll not mention the result from the match played in my least favourite city(see report prior to this) but I was saddened to hear that Gateshead couldn’t overturn Darlington’s one goal advantage in the semi-final of the FA Trophy, so yet again, Wembley dreams crash and burn for at least another year.
That result means that this is my last Saturday game in London this season, so that’s good news for tube travellers, as your truly won’t be in the big city, being the root cause of chaos and delay on the underground.
(apologies for the over use of bracketed comments in the report)