End of the Road For Tuppy! 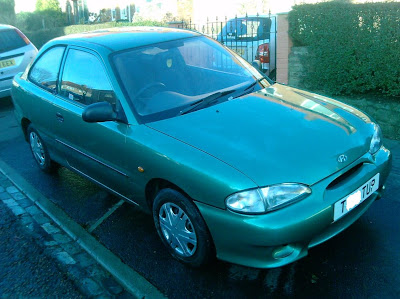 It pains me to bring you the sad news of the demise of my beloved car Tuppy.
Tuppy had been such a loyal servant who I could always depend on, as I travelled around the country watching football on lots of new grounds.
I refused to sacrifice Tuppy during the government’s car scrappage scheme in 2009, keeping faith with the old jam-jar as he didn’t deserve to be put on the scrapheap when he still had so much to offer.
However the old faithful hasn’t been too well lately, so reluctantly I’ve had to let him go in favour of a newer model.
So I would like to take this opportunity via the blog to thank Tuppy for never letting me down and being such a good companion over the last 9 years and over 42000 miles.

To bad. But look at the bright side, your new car will probably treat you the same for a lot of year. Good luck with your new car.
iPad Aanbieding

Shaun; really glad you enjoyed the show; but I had to say I too have just lost my beloved (S-reg) Hyundai Accent, 143000 on the clock... and known by me as 'The Warrior of the Road.' Good job we live at opposite ends of the country, or we'd be rivals in the second hand Hyundai market...
Ian M.