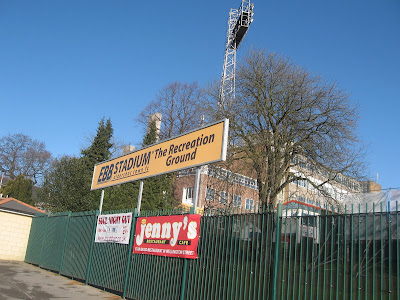 Aldershot is a town in Hampshire, best known as the home of the British Army, the armed forces having established a base in the town in 1854, which became a permanent home for troops returning from the Crimean War.
The army camp saw the town’s population grow from 875 in 1851 to over 16,000 within ten years. Today the town has a population of 33,840 whilst the Aldershot Urban Area has a populace of almost a quarter of a million.

The original Aldershot FC formed in December 1926, setting up home on the council owned ’ Rec’ the following year. The first competitive match took place on August 27th in the Southern League, Grays Athletic their opponents in front of a healthy crowd of 3,500.
Aldershot were elected to the Football League Division Three South in 1932 after winning the Southern League title, replacing the defunct Thames AFC who gave up their place in the league.
The original Shots played in the Football League for 60 years, peaking at 8th in Division Three in 1973-74. The clubs suffered more lows than highs throughout their League career. The biggest highlight came at the end of the 1986-87, the first season of the Football League play offs. Aldershot finished 6th in Division Four and after seeing off Division Three bottom side Bolton Wanderers in the semi-finals they went on the beat Wolves 3-0 on aggregate in the final over two-legs. (sorry Tim!…Eddy)
The club’s financial plight first came to prominence in 1989, mounting debts resulted in the club being wound up in the High Court in July 1990 with debts of almost half a million pounds. However the winding-order was lifted after one week, with funds of £200,000 from a young property developer, meant the club could kick off the 1990-91 season.
Unfortunately the club’s saviour didn’t have the sufficient funds to keep the club running, which saw him eventually end up doing time for this crooking dealings while time was ultimately called on Aldershot FC.
On 25th March 1992 the club finally went out of business, resigning from the Football League with their record expunged. The final game played was a 2-0 defeat away at Cardiff City on the 20th March.
A new club was immediately born by a group of loyal supporters, rising like a phoenix from the flames, the club reformed with the Town suffix added to the name.
The new club resumed in the Isthmian League 3rd Division the following season, winning the league title as well as the 2nd Division the following year.
The Shots progressed through the four divisions of the Isthmian League over an eleven year period, winning its Premier division in 2002-03, thus gaining promotion to the Conference.
After twice missing out in the play-offs, Aldershot were promoted from the Conference after only five years. The Shots crowned champions in 2007-08, amassing 101 points, the Hampshire town returning to League football after a 16 year exile. 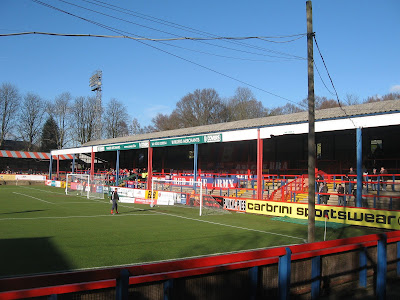 The Rec is set within a public park, the Main Stand is on the north side of the ground which is a small narrow all seated stand in club colours with a striped con-iron roof. The stand is overshadowed by the large office block at the rear. The forecourt at the stand entrance has a small club shop(pin badges sold out!) and office block.
The South Stand is the oldest structure, built in 1929. The cantilever roof overhangs at the front which acts as a sun visor and overall hasn’t changed much in those 70 years apart from the odd tweak here and there for safety reasons. The stand sits centrally with a mixture of red and blue seats including a section dedicated to away supporters. There’s also a pub situated underneath the stand called Wallys Bar .
The East Bank is a large terrace which is shared with the away supporters. The stand has a barrel shaped roof which was added after the war and later extended with a flat roof at the front. There’s extra terracing which extends out towards the seated stands with the unique feature of a line of trees along the side terrace.
The High Street End is unused apart from a gangway between the north and south sides and the space is filled with large sheets of advertising on scaffold supports.
The ground has a set of the classic subbuteo type floodlights which were switched on in May 1953, the highest attendance came in January 1970 - 19,138 for a FA Cup tie with Carlisle United.
For sponsorship reasons the ground is now known as The EBB Stadium at the Recreation Ground, with a current capacity of 7,100 with 2,000 seats.

Aldershot Town are currently managed by former Birmingham City, Portsmouth and Newcastle United midfield terrier Kevin Dillon, a man certain friends remind me as the footballer that cost me a fortune.
Dillon made his United debut along with fellow experienced new signings Quinn, McGhee and Burridge in a memorable 5-2 opening day win over Leeds United, with an impressive display in the heart of the Toon midfield. He almost added to the impressive score line, hitting the post early in the game which encouraged me to back him for first goalscorer in future games.
Over the following two seasons Dillon made 76 appearances scoring a grand total of zero, so he cost me about £70, that effort in his debut being the closest he came to hitting the back of the net.
Dillers has done at good job on the quiet since taking over the manager’s hot seat in November, recent good home performances against Rochdale and Bournemouth have taking the Shots into the play-off positions.
Grimsby on the other hand went into the match without a league win in 18 games, although they can count themselves unlucky, Adam Proudlock missing a penalty five minutes from time which would’ve gave the Mariners three precious points in their fight for survival.
The visitors took the lead in the 5th minute, a low cross from Michael Coulson was deflected into his own net by John Grant. That goal gave them a bit of confidence, creating a few half chances in the opening half to extend the one goal lead.
After a half time rollicking from Dill, The Shots were a different proposition in the second half, looking more dangerous and likely to score with each foray forward.
The breakthrough came on 68 minutes, substitute Danny Hylton raced on to a Morgan flicked header to shoot past Colgan at the far post.
The home side looked set to take the points but it was the visitors who almost snatched it. A Cowan-Hall cross was a handled by Sandell, the referee taking the linesman’s advice to give the spot kick.
Proudlock stepped up and sent his shot sailing high into the East Bank, blowing the chance to end Grimsby’s barren run and preserving Aldershot’s fine home record of only one defeat at The Rec this season. 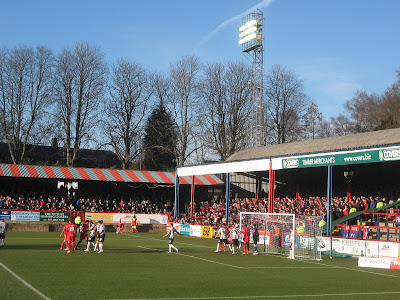 Just when you thought it was safe to open the curtains, there it was at 5.20 this morning, its back and looking bad - yet more snow, a good 2-3 inches of the shit. Thankfully I was leaving the white stuff behind heading from the naughty north to the sexy south(reference to weather) safe in the knowledge that I was heading off to warmer climes.
The mouth watering prospect of a League Two fixture between Aldershot and Grimsby was arranged back in the hazy shade of July. Grimsby Town fan and 100FgC squad#88 Graham Precious emailed me with his planned fixtures for the forthcoming season with the offer of meeting up and travelling together.
So I set off on the 0635 from Newcastle Central to Kings Cross where Graham and his son Hayden were waiting to welcome me off the train at Newark Northgate. After stopping off for a McDonalds breakfast we hit the road to Hampshire just after 9am, the journey running smoothly arriving in the town by noon.
I picked out the Royal Staff pub for pre-match bevvy and a spot of lunch, which serves a selection of Fuller’s ales. The pub is quiet cosy, the landlord, bar staff and even the boxer dog Tyler made us feel most welcome.
It was a very enjoyable day, its always great when a plan comes together and the whole day went without a hitch. I arrived back in Newark at 7.50pm, which gave me a bit time to tick off another Wetherspoons pub before catching the 2147 back home. The only disappointment on the day was actually missing out on witnessing a rare Grimsby Town victory, which would have been good to see and even better for long suffering Mariners Graham and Hayden. 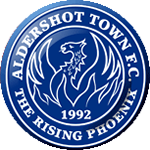 Always liked the Rec. Saw several TFC thrillers there including a 3-3and a 3-4 reversal.

Lucky for you Alan Smith didn't have a thirty yarder cleared off the line in his debut game, eh?

He couldn't score in a brothel with a diamond on the end of his knob! :-)

This brings back memories of when I was a kid, growing up fairly close to Aldershot and occasionally going to the Rec with my Uncle (back in the late 60's and 70's).
I seem to remember the High Street End being better known as the "Net end" in those days (for obvious reasons) and standing in terracing on the North side of the ground, situated at the rear of the seats.
I also remember a certain Neil Warnock playing there and the fact that most of the people who stood in the same area as ourselves, thought he was next to useless.
I still keep a lookout to see their result every week.
Happy days.