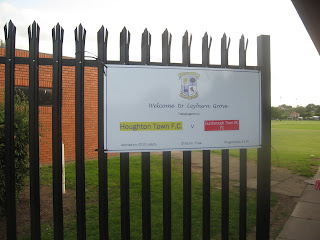 Ambitious club Houghton Town took the step up from the Durham Alliance and along with Scarborough Town are this season’s newcomers to the Wearside League.
The club formed as recently as 2006, originally as The Board Inn FC, playing in the Wearside Combination League for two seasons, before a successful season as the renamed Sunderland South FC last season.
The club is based in Houghton-le-Spring, a small town approximately 6 miles south-west of Sunderland town centre.
Home matches are played at Leyburn Grove which is part of the Houghton Sports Complex. The pitch is in the far corner of the cricket field, fenced off with eight sets of beanpole floodlights and a set of ‘site safe’ fold away dugouts.
The clubhouse is the Houghton CW pavilion with a separate changing room block, both found at the main entrance next to the car park, where access is gained at the bottom of the housing estate. 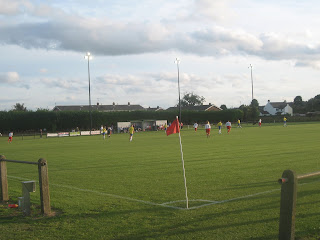 Houghton Town made their Wearside League debut the previous Saturday with a 2-0 home victory over Coxhoe Athletic, but unfortunately were unable to continue their winning start against Guisborough Town HC, their opponents enjoying a comfortable 3-0 success.
The visitors took an early lead when Sharkey got on the end of a free kick, finishing with a fine volley from close range, he then doubled their lead five minutes before the break, his shot taking a slight deflection giving the goalkeeper no chance.
Houghton’s best chances came in the second half, a couple of free kicks from the edge of the box going narrowly wide, then on 76 minutes they were awarded a penalty after a handball incident.
After a lengthy delay due to strong Guisborough protests which resulted in the referee dishing out a few yellow cards, Matthew Raine eventually stepped up only to see Guisborough’s keeper pull off a fantastic save to retain their two goal lead.
The match was finished as a contest five minutes from time, Sharkey got on the end of a left wing cross to complete his hat-trick and secure the away victory. 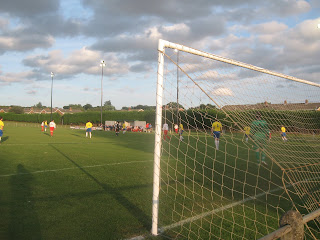 Houghton Town also have access to the FIFA approved 3G pitch at Houghton Keiper Sports College, which is floodlit and available during bad weather. So I may be revisiting Houghton Town again at another ground during the winter months. 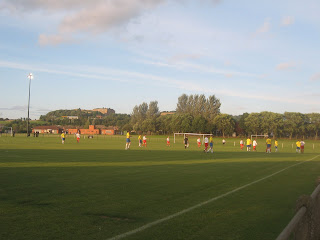 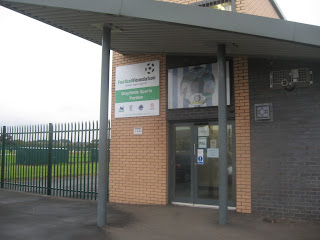 Hartlepool origins began in the 1980’s playing in a local church league initially as the Fens Hotel and then under the name of Arriva FC.
The club moved on to the Teesside League, winning cup honours and the Second Division title under the new name of Teesside Arriva.
On the eve of the 2004-05 season the club became Hartlepool FC, going on to win the Teesside League and the Durham Trophy that season, the move to the Wearside League came in 2006-07. 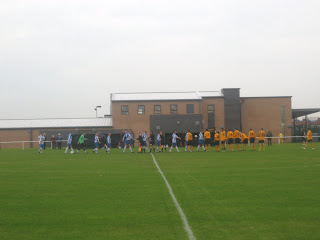 Grayfields Enclosure is a large area of playing fields on the outskirts of the town, the complex has several pitches, including an all weather surface.
Access to the main pitch is via the pavilion, where you walk through the building’s reception, then along the corridor passing the changing rooms and like the players and staff you gain entry to the pitch through a set of double doors, where a couple of young lads are waiting to take your admission money. 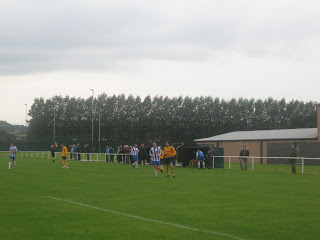 The game with Annfield Plain was played in good spirit, with no nasty tackles and the referee not receive too much stick, a rarity indeed.
Annfield took the lead in the first half when a 25 yard shot from Gordon went in off the post. That lead was extended on 68 minutes when Henderson latched on to a through ball, the keeper saved the initial shot but the rebound fell kindly for him to knock the ball into an empty net.
Hartlepool halved the deficit a few minutes later with a well placed shot from Ross, shooting past the keeper into the far corner from a tight angle wide on the left.
Annfield finished the game more stronger, looking more likely to extend their lead than concede an equaliser.
Then on 80 minutes the referee blew the whistle and called both captains together. It had been raining for most of the day and dark rain clouds meant the visibility was getting worse.
As Grayfields has no floodlights facilities, the referee and both skippers decided to play five more minutes instead of the allotted ten. A desperate last five minutes saw no further goals but Annfield Plain deserving their victory on the number of chances created over the 85 minutes.
The match kicked off five minutes later than the scheduled 6.30pm start, due to the Annfield Plain team turning up late, so if they had of been on time there wouldn’t have been such a problem, so maybe in the end they may have benefited by their late show. 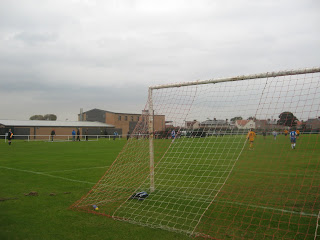 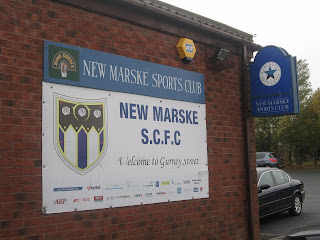 New Marske is a village in the borough of Redcar and Cleveland. The village was originally a miners settlement, having a cluster of miners terraced houses, with the old mine works found nearby in Errington Woods.
New Marske Sports Club became members of the Wearside League in 1998-99 season, finishing runners-up in the newly reformed Division Two in their debut season.
The clubs most successful season to date was in 2007-08, winning the league title with only two defeats in 36 games and scoring 120 goals. They also added the Monkwearmouth Cup and I was in attendance to see them completing the treble, when winning the Wearside League Cup at Wolviston. 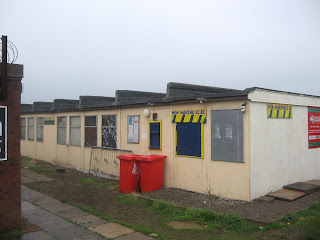 The Gurney Street ground is found at the beginning(or end - depending which way you came) of the village. The New Marske Sports Club is situated in the car park, the spacious lounge bar looks out onto the pitch.
The players changing rooms annex the clubhouse next to a separate building for the match officials, which also has a refreshment bar. The home dugouts are also on the nearside with some partial hard standing. The other three sides are grass banks with the away dugout opposite, from here you can see panaramic views of the North Sea, covering the coastline from Redcar down to Marske.
The club have ambitions to eventually step up to the Northern League. Planning permission has been giving to develop the ground and install floodlights, but unfortunately the much needed grant from the FA is currently on hold. 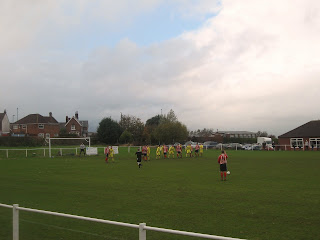 New Marske’s opponents Ryhope CW have had a fantastic start to the season, winning 10 and drawing one of 12 games, however this still isn’t enough to claim top spot, leaders Scarborough Town have a two point lead winning 11 from 12.
Ryhope dominated the game but found themselves in the unfortunate position of trailing at half time. Looking at the New Marske players, I think you need to be at least six foot tall to get a game. The goal coming from the big number eleven Michael Mackin just before the interval, nodding the ball high into the top corner after a good cross from the overlapping right-back. 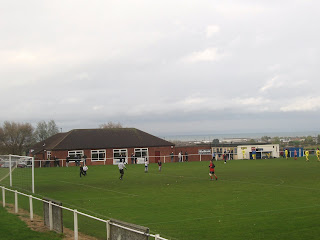 Ryhope took control early in the second half. Butler equalised chipping the goalkeeper with a nice finish and then Jordan rounded the keeper to make it 2-1 in the 54th minute.
New Marske were giving an opportunity to equalise. A free kick from the edge of the box was blocked and adjudged as a handball. Howe stepped up and young keeper Atkinson made a terrific save, diving low to his left to palm the ball out for a corner.
Ryhope were finally guaranteed the three points on 71 minutes, Butler beating the offside trap before nonchalantly knocked the ball past the keeper, his manager’s half time prediction of a 3-1 win proving to be correct.
Footnote; This win for Ryhope, coupled with Scarborough Town's suprising 3-5 home defeat to Kirbymoorside saw them leapfrog them into top spot. 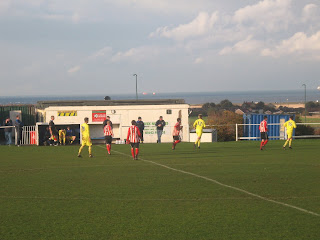