Dawn of a new season

After the briefest of mid season breaks, the 100FGC returns for which will be the blog’s fourth season
There’s a lot to look forward to over the coming season. My main priority this season will be in the Conference. Gateshead make their return to the Premier of Non-League f

ootball, where I’ll be trying to take in as many games on the road with the Heed Army as possible. However after studying the fixtures, this could prove to be a difficult task. There’s some great towns and grounds that I’m looking forward to visiting, as we hope to establish ourselves in the Blue Square Premier (I’ll start using the sponsored name from now on)

I can always turn a negative into a positive, and personally the one positive thing to come out of the Toon’s relegation is I can now get to the grounds that were too far out of reach. Which I couldn’t travel to independently, but now easier to access by cadging a lift or through an organised coach party.
So there are two prolonged trips to South Wales as well as the longest journey in League football – Newcastle to Plymouth to navigate.
This will give me a chance to see United sporting their new two-tone banana kit in the company of the newly named Toongerine Army.

My lifetime work of trying to finish the 92, is a continuous crawl. A case of two steps forward, three steps back. I’ll continue to chip away at the League grounds to at least give myself a respectable running total and of course my favourable trips north of the border will again feature this season.
Local interest sees two new clubs enter the Northern League; Gillford Park and Newton Aycliffe. A new ground for Penrith and I still have to travel further west to visit Whitehaven, so I can again complete the ‘set’ of “the second oldest league in the world”.
Serial favourites ‘Around the Alliance’ and Wearside League Wanderings will again be making a reappearance during the year as well as the odd toilet block for the world renowned ’Football Bog Blog.
I’ll be taking advantage of the Appreciation Society Facebook group, which was set up with much thanks and applause by Mr. Steven Clifton. I’ll be posting more pictures as well as listing my forthcoming fixture lists, so you know where to see/avoid (delete where appropriate) me over the campaign.
So hopefully with good health and work commitments not causing too many problems, I’ve a lot to get through, so without further ado it's now officially the 2009-10 season, a new dawn fades at..
216 - Farnacres, Beggarswood Park
(Home of Rutherford AFC)
Whickham 3v0 Ashton Town
Pre-season Friendly
4th July 2009 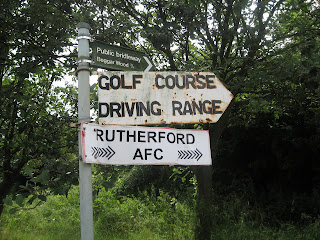 Whickham FC share the Glebe with the cricket club. So with the sound of leather on willow in full swing, they started their pre-season programme at Beggarswood the home of Northern Alliance club Rutherford AFC.

Rutherford are actually the oldest club in Tyneside. Formed in 1878, originally as Science and Art FC, becoming founder members of the Northumberland FA in 1883.
The club change it’s name in recognition of its founder Dr.John Hunter Rutherford, originally playing their home games on the Town Moor in Newcastle.
Now based in the Lobley Hill area of Gateshead, the ground is situated west of the Team Valley, just off the A1 motorway.
The ground is found off a country lane which runs parallel to the motorway, the entrance is at the bottom of a bank, with the clubhouse and changing rooms found at the top of the hill. The pitch is opposite, enclosed with grassbanks, fully fenced off with a set of brick dugouts.
Whickham’s opponents were North West Counties League Division One side Ashton Town. The reason they travelled all the way from Ashton-in-Makerfield for a friendly was a simple one; so they could have a night out in the Toon.
Thoughts of a night in in the big city must have been playing their minds, as Whickham won the game at ease 3-0. A penalty by Pitt, a hilarious own goal and a cracking strike from Kerr (My goal of the season so far) gave the Whickham lads a good work out and it wasn't too bad a game to start off my season 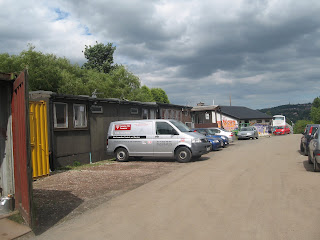 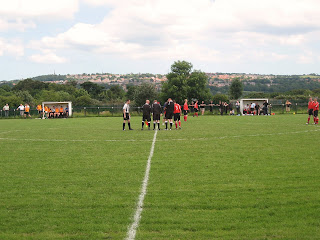 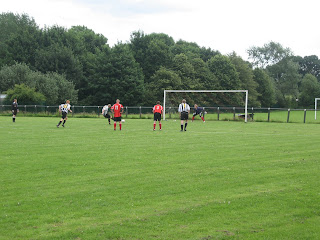 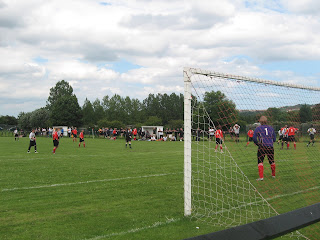 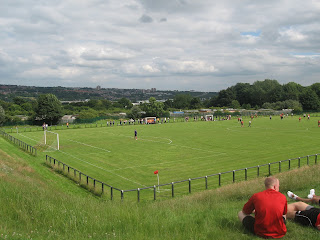 Good first trip of the season Shaun, that last picture reminds me of City Park, Spartans.

Looks like it's not just me then. This seems to have been the shortest pre-season ever. I'll be back again next week at either Tiptree Utd or Dudley Town, but it seems the 08-09 season has only just finished. Can't moan I suppose! I was going to go to Loughborough today which included a steam train from Leicester to L'boro, but they cancelled the game with Hucknall, so another time maybe.

I have provisionally put your name down for the coach to Gillford Park v Washington on Oct 2nd. Let me know if that is OK?

Got the above date wrong - it's actually Jan 2nd!