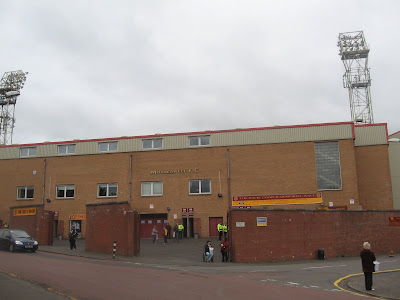 Motherwell is a large town, south-east of Glasgow in North Lanarkshire. The town was known as the steel production capital of Scotland, with its Ravenscraig steelworks one of the longest working plants in the world, earning the town the nickname “Steelopolis” until the facilities closed in 1992.
The town’s football club formed in 1886, the amalgamation of two local amateur works teams; Glencairn and Alpha. Their formative years played on Alpha’s pitch on Roman Road, then from 1889 at Dalzell Park, which opened with a 3-3 draw against Rangers.
Fir Park opened in 1895, when the club purchased a stretch of wooden park land off Lord Hamilton at the north edge of his Dalzell estate. A crowd of over 6,000 witnessed its first game, an 8-1 trouncing off Celtic at the start of the 1895-96 season. In the early years the ground had a pavilion on the east side, then banks of terracing were added which raised the capacity to 15,000 after Fir Park staged its first international fixture.
A two-tier Main stand was built on the west side after further work in improvements to terracing, the playing surface and after purchasing more land; new turnstiles at the Knowetop end.
Success on the park saw the League Championship in 1932, breaking the Old Firm’s monopoly, winning the title for the only time five points clear of Rangers, including a record 52 goal maul from Willie McFadyen .
The Scottish Cup was won for the first time in 1952, a cup run which witnessed Fir Park’s record gate of 35,632 for the 4th round replay - a 2-1 victory over Rangers. That decade saw more ground improvements, with cover added to the enclosure and lamps mounded on the stand roofs, until wind damage to the enclosure roof resulted in four corner pylons being built in 1959.
In 1962 a new Main Stand was constructed at a cost of £92,000 financed by the sale of two players; Pat Quinn and another lad[*] who both signed for Liverpool. Motherwell supporters were naturally upset with this club policy; many shunned the stand making it the least populated side of the ground. The stand remains incomplete to this day, after one of the residents of the neighbouring houses complained, refusing to sell and questioned the property‘s valuation. The annoyed neighbour won his dispute, so by the time the house owner moved on, the club weren’t in a financial position to finish off the stand, although they did purchase the house themselves to use as offices.

[*]The lad in question had the same nickname as a TV character played by Roger Moore and later Ian Ogilvy. This man later had a career in the media, spending Saturday lunch times on our TV screens, hanging on his co-host’s every word and hysterically laughing at his un-witty remarks. I also remember he had an undying love and uncontrollable infatuation for the then England skipper, which he made no effort to hide, or was it only me that noticed this?
I’ve always despised this man, reason being is his unhindered dislike to a football club close to my heart. Earlier in his career he had a trial at this club, but was rejected and always remained bitter thereafter, even though his career path took an upward turn. 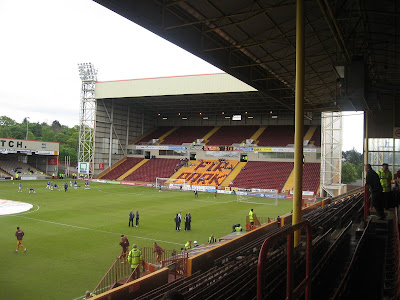 The Main Stand is now called The Phil O’Donnell Stand, in honour of the club captain who died on the Fir Park pitch during a game against Dundee United in December 2007. The stand has 3,385 seats in a mixture of claret wooden flip seats, with amber bucket seats added at each side. The stand comes to a stop with the iron girder still visible from the incomplete construction 37 years ago.
Following the Taylor Report work started on the other three sides of Fir Park. In 1991 the East Stand was covered and seats added for 3,128 after ‘Well won the Scottish Cup for a second time and enjoyed their first venture into European football. The stand is known for its KEEP CIGARETTES AWAY FROM THE MATCH façade, since the introduction of the smoking ban in 2006.
The ground is dominated by the South Stand which was constructed in 1993 at a cost of £2.2M, the two tiers of claret seats are split by a row of large windowed executive boxes. The capacity is 4,856 which is reserved for away fans. There’s an amber section of seats directly behind the goal, with FIR PARK picked out in claret.
At the north end the Knowetop Terrace was seated and renamed after one of my personal favourite Scottish footballers Davie Cooper, who served both Rangers and Motherwell and later Clydebank with distinction. He died in 1995 aged only 39 and played a major part in Motherwell lifting the Cup in ’91. The stand was built in 1995 and is divided into five sections, again in the club colors with more executive boxes at the back of the stand. The roof has a large façade but is naked unlike the South Stand which has large advertising space.
An eye catching feature of Fir Park is the floodlight pylons, which lean onto the sides of the stands, looking like a couple of bodyguards shielding both goal side stands. The pitch has caused major trouble for the club over the last few years. The problem is being resolved this summer with remedial work and repairing the under soil heating system. The current capacity of Fir Park stands at 13,742.
The match against Kilmarnock was a clash at the top end of the bottom part of the split, in other words; a mid table clash. Before the teams arrived the PA played a canny little ditty called ‘Up The ‘Well which sounded like it was sung by an Andy Stewart tribute act, this was followed by that awful Russian funeral march they play at sunderland and then a saving grace; a burst of Local Hero when the players ran onto the pitch.
The game was a poor affair with nothing happening of worthy note in the first 25 minutes. The highlights in that opening period were a rather attractive young lady looking for her seat in the stand which caused heads to turn in the press box. Then police and stewards went to great trouble to confiscate an inflatable alligator from the Killy end, which was a bit over the top, as the away supporters were just enjoying themselves and not being any bother.
The first shot on target produced the opening goal on 27 minutes, a fine through ball found Invincible unmarked, who had a simple task of hitting the target from 12 yards past the helpless Krysiak.
The second half continued in similar fashion, although the Steelmen did go close with two headed efforts both from corner kicks, the first of those from Brian McClean bounced back off the crossbar.
Motherwell struggled as the clock ticked towards full time, I could already predict the football manager clichés that Mark McGhee would say after the game, quotes like ‘we weren’t at the races today’ or ‘we struggled to get out of the stalls’ but then when all seem lost ’Well equalized with ten minutes remaining.
A brief spell of pressure ended with Clarkson getting the ball near the bye line, who did well to get in a cross for McClean who side footed the ball first time into the far corner of the net. That looked like that was it, honours even, but in the last minute of the game and for me personally, the last seconds of my season, a cracking goal to finish off my groundhopping campaign. A great piece of skill from Fernandez with a cheeky back heel and flick, played in Mehdi Taouil who himself showed great skill, slipping past a defender then selling a couple of lollipops before slamming the ball home at the near post. Overall maybe Killy just about shaded it, but the performance from Motherwell wasn’t the best way to leave your supporters for the summer holidays. 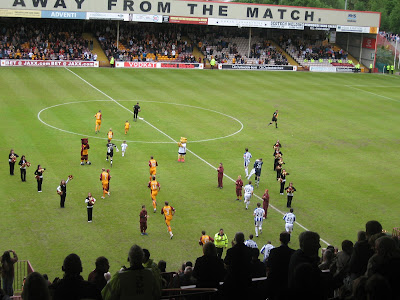 It’s become an end of season tradition now that my last match of the season is a journey into Northern Britain. There’s a regular train direct from Newcastle to Glasgow which passes through Motherwell, the journey takes about two and a half hours. I caught the 0752 arriving in the town with plenty of time for breakfast and a drink, so regular readers can probably guess where I went? Aye you guessed it, well done! - Wetherspoons. The Brandon Works pub is just around the corner from the station and I enjoyed an excellent big plate of Scottish breakfast washed down with a pint from the local Strathaven brewery.
I really liked Fir Park, a good mix of old and new and with the club colours being amber and claret, (which originated from Lord Hamilton by the way….Eddy) the ground is more attractive than banks of red or blue seats which are commonplace elsewhere.
I’d like to thank the club for their hospitality, I was well looked after from the moment I arrived. At half time the scotch pie and chocolate bar that complemented my cuppa were splendid (apparently you only get a tray of biscuits at Wembley…Eddy)
After the match I had a good hour and a half to kill before the 1604 train, so I planned to check out a few more pubs. I popped my head in a few bars next to the station but I walked back out again, didn’t like the vibes I was getting and the clientele didn‘t look over friendly, so I returned to the safe haven and £1.49 a pint of The Brandon Works. (I must give a special mention to the excellent bar staff at this ‘Spoons, brilliant service both before and after the game, ta!)
So that’s me done for another football season, I’ve traveled some miles this term and as always I’ve thoroughly enjoyed sharing my groundhopping adventures with you. When the season’s over I usually welcome a rest from football, but within a fortnight I’m trawling the papers and internet looking for news of pre-season friendlies and needing a footy fix. For the time being though, I’m happy to go into football hibernation for the summer, which sounds like a long break doesn’t it? But it’s only six weeks until I take in my first game of the brand new football season.

Outstanding floodlights, a scotch pie AND a chocolate bar!?

I'll be dusting down my Brighton to Motherwell train timetable for next season and no mistake.