An eventful season, one of both joy and despair, but overall one I’ve enjoyed immensely
I managed to get to 83 matches this season, half of those at new grounds. As I mentioned in this article last season, that not many compared to some, but I’ll be happy enough to continue with that sort of matches/grounds ratio every season until I go to that great football stadium in the sky, or hang up the woolen scarf, put away the notebook and camera for good.

As I had expected, although it was hard to comprehend when it was finally confirmed; Newcastle United FC have been relegated. (cue large cheer and schoolboy giggle from the majority of your readers…Eddy) There’s been much talk in the media about where the blame lies and I’ve heard tales from close sources about what’s been going on behind the scenes, stuff which I obviously can’t relate on here for legal reasons.
I had originally wrote a long piece about my feelings on the state of NUFC, but I’ve pulled the plug on it and decided not to post it within this years review. I feel my thought on the subject are best suited for a different publication and not drag down this blog with a depressing “man on the window ledge” rant.
However what I’ll briefly say is I feel the blame not only lies with the club hierarchy, but also long term with the clubs supporters, not all mind; just some…well not me anyway! If the Toon Army truly think things are really bad now, then all I can say is - “You’ve seen nowt yet!”
I’ll leave the final word on this subject with a video from our supporters’ branch on mainland Europe. It’s a savage but honest assessment and I warn you it’s not to be viewed by young’uns eyes.
The very last sentence says it all for me and is the moment before everything spoilt again.
And now the good news, it hasn’t been all football doom and gloom on Tyneside; Gateshead Football Club are back in the Conference after an 11 year absence. During that time away the club dropped two divisions and almost went out of business, but back-to-back promotions will see the Heed return to the top of the Non-League pyramid.
If I’m honest I didn’t think we were going to go up, even though Gateshead were in the top two from the turn of the new year. It’s not that I questioned the teams credentials, we continued from where we left off the previous season, playing great football and scoring lots of goals, it’s just I couldn’t imagine Gateshead playing in the Conference in 2009-10. It’s all seemed too good to be true, so maybe my negativity with NUFC spread to my love of GFC, my football psyche telling me it’s all going to go wrong.
You may have read how the promotion race progressed as I had some brilliant away trips visiting some of the grounds in the Conference North. Tamworth piped us to the title and so for the second successive season it was left to the do or die of the play-offs. Southport were comfortably despatched over the two legged semi-finals which set up the final against AFC Telford United at the International Stadium. 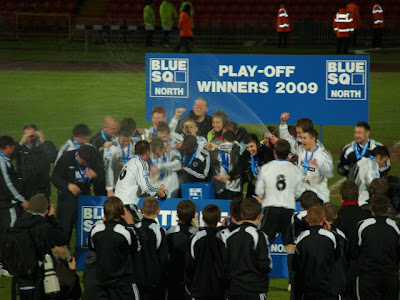 (Picture courtesy of Petty Officer Percival)
A crowd of over 4200, including over 1000 from Shropshire witnessed a tense game played in an electric atmosphere. A game of very few chances was settled by a Wayne Phillips goal eight minutes from time, which signaled wild celebrations from the Heed Army and Champaign flowing after the full time whistle.
The fact promotion was achieved took a few days to sink in. I spoke to a few people who attended the game who never go to the Stadium, all in agreement that they enjoyed the occasion and will be returning next season. The club has a reputation for not having a big support but attendances have continued to rise over the last few seasons, this as well as acquiring some of the disillusioned Toon support means things are looking up both on and off the pitch.

I didn’t have any plans concerning bagging new grounds for this season. It‘s basically been if I’m in any particular vicinity I’ll try my best to get to a game. As the season progressed I decided to try and make headway with my missing League grounds, a list which never seems to go down over the years and remain at the 50-60 mark, due to clubs getting relegated or moving elsewhere.
Again I enjoyed meeting up with some of the 100FGC squad during the season, I’ve made some great friends who I’ll hopefully catch up with again, as well as some of the rest of the squad next season. (As long as they buy you a pint! …Eddy)
Until then
Cheers!
Thee Shaun Smith (venerable journalist and webmaster and not him off ‘Britain’s Got Talent‘)

It took a few days for it to sink in for me too but we are there in the Blue Square Premier !
HEED ARMY !

Thanks as always Shaun, I've really enjoyed reading your reports as your blog goes form strength to strength! I always thought the Magpies would dig their way out of their predicament, the Prmeiership is weaker without the Toon Army. Still it's great to see Gateshead back in the Conference!

Best wishes mate, hope you and yours have a good Summer.