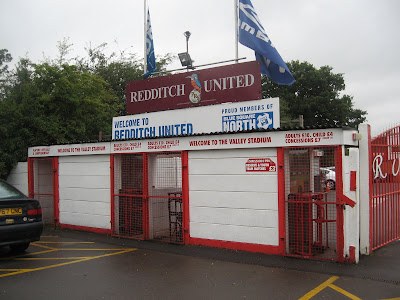 Redditch is a town south of Brum in Worcestershire, an early 8.30am departure for Gateshead’s longest journey of the season, a 450 mile round trip for the opening day fixture of the Conference North season.
Redditch United, founded as Redditch Town in 1891, are one of the oldest established clubs in the Midlands. The majority of the Reds formative years were played in the Birmingham Combination, winning the first of four titles in 1914, success was also gained in the Birmingham Senior Cup and the Worcestershire Cup during this era. At the turn of the 1970’s they became ‘United’ and joined the Southern League, winning the North section in 1975/76.
In 1979 the Reds became founder members of the Alliance(Conference) but finished bottom and hence returning to the Southern League, the restructuring of the pyramid in 2004/05 saw the club join the Conference North, when they finished 9th, their highest finish so far.
The ground is a couple of miles off the M42 motorway, hidden off Bromsgrove Road, a long narrow lane leads you down into the valley (an appropriate pre-match song by The Skids) there was just enough room for our coach to squeeze past the parked cars on the side of the bank.
I overheard a suit from the club saying that it’s been constantly raining, but not to worry because the game is definitely on. The pitch looked very poor, especially considering it’s August, with the goalmouths patched up and the grass looking uneven and lumpy, maybe the problem is due to the valley location of the stadium, where drainage problems are more likely the occur.
The ground entrance gates and turnstile block is in the corner, we heading straight into the ground, avoiding walking back up the bank in search of a pub and located the clubhouse. On entering to the immediate left are the toilets, supporters club shop and programme stall which share the same building, the clubhouse is inside the main stand up a flight of stairs. The stand has dark red supporting frames and white back walls, with 5 rows of sky blue seats at pitch level, there’s an upper section of seats reserved for club officials, where access is gained from inside the clubhouse, a large window views into the ground from the bar, but is blocked and partitioned off on matchdays.
There’s standing terraces behind the nearside goal and over the far side, separated by a narrow pathway in-between, they both have red crash barriers and partial cover at the back of the terrace. The dugouts are situated at the far side, along with the floodlights, with the grounds name and club crest on the terrace roof, behind the far goal is a work in progress, a stand which looks more of a temporary structure is stuck in the middle of a building site, which is cordoned off. 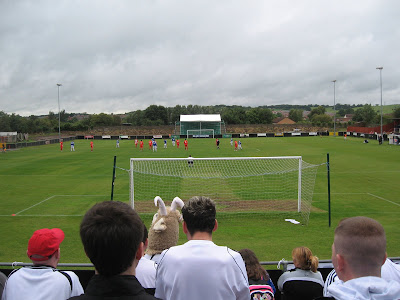 A pleasing opening day performance from Gateshead, especially in the first half, when the contest could have been over, mainly due to a solid performance from midfield, creating good chances for Southern and Armstrong, who both linked up to give the visitors the lead, a well worked free kick from Turnbull, sliding the ball into the path of Southern, who sent in a far post cross which was headed home by his strike partner.
Redditch had more possession in the 2nd half, putting the Heed defence on the back foot, until the pivotal moment of the game on 70 minutes. A free kick from 20 yards out, sailed over the defensive wall and rattled the underside of the crossbar, bouncing on the line in a Geoff Hurst 66 kinda style, before being booted clear. Then within a minute Gate broke clear, staying onside with only the keeper to beat, but saw his shot agonisingly rebound back off the post, so within seconds the game could have been level or virtually over.
Gateshead capped a solid display with the clincher 3 minutes from time, Steve Turnbull was tripped in the box, the referee had no hesitation in giving a spot-kick which was despatched home by John Brackstone, making no mistake on his league debut for the Tynesiders, just reward for the Heed Army, after our long trip south.
After returning to the clubhouse after the game, where I had a pint of cider (shock!! I had a couple of pints of Banks Bitter pre-match and I wasn’t too chewed on it and ended up drinking larger) we departed for home at 5.30pm, doing at pit-stop at the local offy, for some celebration booze, before heading up the M1 and a good drunken singsong (not me though, I had a kip) rounding off an enjoyable day out, hopefully the first of more similar away winning Heed days, over the subsequent 10 months. 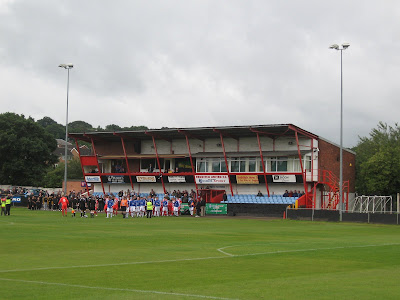