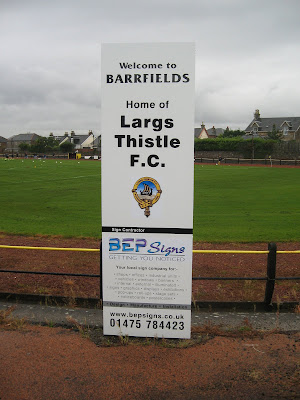 This years family holiday involved us travelling to previously unexplored areas of the west coast of Britain, this week we were north of the border, staying in Weymss Bay in Inverclyde.
There were several ground bagging options available this week, the Scottish season got under way last weekend, so this midweek it was the opening round of the CIS Cup, but I really fancied a visit to one of those fabulous Scottish Junior Grounds, that I’d viddied on Jamie Wire's excellent website; Non League Scotland. After checking the fixtures, I found that Largs Thistle were playing their opening home game of the season, in the Ardagh Glass League Cup, it was only a short 15 minute drive from our digs, with a convenient early evening kick-off time of 7pm.
Largs is a town in North Ayrshire on the Firth of Clyde, the original name translates as ‘the slopes’ in Scottish Gaelic. The town has historic connections with the Vikings, the Battle of Largs in 1263 saw the Scots attack Norwegians bidding to salvage ships from the army fleet of King Magnus III. There’s also an annual Viking festival held in the town, with the award winning Vikingar Centre in Barrfields, not far from the football ground.
The club nicknamed ‘Theestle’ formed in 1890, currently play in the Scottish Football Junior West Division One(Stagecoach Superleague Division One)the second tier of the west region, after winning the Ayrshire District League in 2004/05 and are previous winners of the Scottish Junior Cup, beating Glenafton Athletic 1-0 at Ibrox in 1994.
Barrfield Park is off the main Brisbane Road, from where you can see inside through the aluminium fence. The ground has an oval appearance with terracing curling around three sides, with the main stand on the far side. The stand runs full length of the pitch with 5 rows of wooden bench seats, housed inside a barrel shaped roof, entrance is gained through a door around the back and the stand is where the local lads gather to give Thistle their support, as well the opposition some stick. Next to the entrance gate is the refreshment bar and changing rooms for the away team and match officials, with the home team having a separate building to change in, next to a couple of portakabins used for storage and match hospitality.
After 24 hours of constant rain, I feared the game may have been off, but I arrived to find the players on the pitch doing their pre-match warm ups and the pitch in excellent condition. Largs dominated the first half, creating several chances in the opening stages, until Kilwinning’s task was made much harder with the dismissal of Gavin Orr for an off the ball incident, which was spotted by the linesman. A few minutes later Largs took the lead, a pinpoint cross from the right was firmly headed home by James Marks, then just prior to half time, another header, this time direct from a corner kick from the biggest lad on the field, Neil Shearer (never thought I’d see another Shearer goal again) who celebrated by yelling “girrrin!” before being mobbed by his team mates.
Kilwinning slightly improved after half time, I walked past a few of their fans, who were giving the ref and linesman some serious abuse, obviously upset at the dismissal and every decision made thereafter. The weather deteriorated, with the swirling wind and rain somewhat spoiling the game, however Rangers did get back into it with a penalty from McGregor on 83 minutes, but this was merely a consolation, as 3 minutes later Marks got his second of the night, a fine run and cross from Craig Black was finished off with a neat flick at the near post, which capped off a really enjoyable game considering the poor weather.
I contacted the club prior to heading north, to confirm that the game was on and the whereabouts of the ground. On arrival I was greeted by club secretary Donald Reid, who made me welcome and invited me into the hospitality cabin for a cup of tea at half time, where as well as a cuppa and a biscuit, I was giving a club pennant as a souvenir of my visit. Many thanks for the warm reception and the best of luck for the new season, I’ll certainly be keeping an eye on Theestles progress. 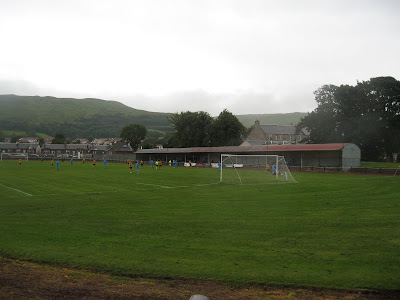 Interesting you have an estimated attendance of 160 as there were only 53 paying punters on the night - although a few did arrive after the gateman had left. Has to have been the lowest attendance I've ever seen between the two sides at either Barrfields or Abbey Park. Think we'll need to keep a better eye on the bottom end of the ground where some sneak in for free. Hard to believe that only 14 years ago there were 6,151 watching a semi final between these two sides.

The current club were formed in 1920 and probably have little connection to the original Thistle formed in 1889. In 1986 the SJFA produced a centenary book which gave 1890 as Thistle's year of formation. Over 20 years later and club programmes are still reproducing that same mistake.

That was my first ever attempt at producing a programme. Rather hastily put together as we don't usually issue programmes until the league campaign starts.

Largs went over 25 years without ever winning at Kilwinning's ground. Kilwinning had a similar poor record at Barrfields in the 80s and 90s. Largs have had the upper hand over the last 5 years - probably coinciding with Kilwinning's sugar daddy stopping putting money into their club.

Just been looking at the photos of the ground - I never noticed how overgrown with weeds the ground is becoming.

I did a headcount during the first half and counted around 150, I noticed a few latecomers so estimated 160.
I hadn't had a drink so I wasn't seeing double.

Thanks for the additional information, much appreciated.

Some really good photos of the ground, the old stand is a belter.

I didn't think that 9 months after this game Largs would find themselves promoted to the Super League Premier Division and the opponents that day, Kilwinning Rangers would be relegated to the Ayrshire District League. It was only 10 years ago they swept all before them winning 6 trophies (including the Scottish Junior Cup). Only five years ago they were Super League Premier Division champions.

Congratulatons on your success. Smashing little club, best of luck in the Super League Premier Division.