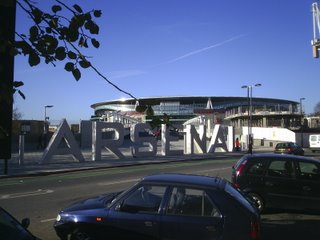 After residing at Highbury in the London Borough of Islington for the last 93 years The Gunners have shifted home just around the corner(well,they're settled in the area) to their new home at Ashburton Grove, or to give it it's current title for at least the next 15 years, The Emirates Stadium', thanks to a £100m sponsorship deal with the Dubai based airline.
This 17 acre site was build at a cost of £390m, and is a four-tier bowl type stadium decked out in comfy red seats with lots of leg room (I only discovered this in the half-time interval,due to the usual standing up at away matches stance amongst the Toon Army) The bowl shape is very stylish and I especially like to use of giant windows at the back of the top tier which lets in lots of natural light. Instead of advertisements the stadium is surrounded by a gallery of honours which runs inbetween two of the tiers, listing the clubs achievements from their first FA Cup win in 1930 through to their latest trophy win in 2005.
A refreshing change when attending an away game in the Premiership is meeting a friendly bunch of ground stewards. The lads employed at the Emirates spent a lot of time laughing and carrying on with the Newcastle fans, and didn't have the 'power-mad-jobsworth-type-attitude' which I've come across in the past. The men in orange coats in the section of the ground where we were standing(not sitting)were always smiling and seemed to actually enjoy their job, or were they Spurs fans in disguise? Happy to see that the Gooners were getting beat 1-0!
I hatched a very cunning plan in locating my way to the match, my mate Big Ian(100FGC squad no.2) drove myself and his son Lee to Cockfosters Tube Station, the most Northenly point on the Piccadilly Line, we then hopped on the tube and within half an hour arrived at Arsenal Station, this meant missing out on the chaos of the London traffic and saved a lot of drinking time. I then arranged to meet up with Wanstead based Geordie exile Decka T, we arranged to meet up at a pub called the 'Drayton Arms', but after asking several locals on the whereabouts of this drinking establishment, no-one seemed to know where it was or weren't interested in helping, I eventually got told how to find the pub by a helpfull hotdog seller. This reminded me of the words of the legend Paul Weller on The Jam's hit 'StrangeTown' the line being "when you ask in a strange town, they say I don't care and I've got to go mate" I know it's sterotypical to suppose that our friends in the South are unfriendly and not helpfull towards strangers, but when I found out the pub in question is opposite the ARSENAL entrance(see above pic)and surely everyone who supports Arsenal must know where it is, so maybe there's some truth in the fact some(not all)Southerners are pig ignorant. It can be compared to an away fan arriving at St James Park and asking where 'The Strawberry Pub' is and me saying "ah divvent knaa"
This was 'The Gunners' 10th game at their new home, winning five and drawing the other four, but in the Premiership they've played six, winning 3-0 three times and drawing 1-1 three times, so what was it to be for Newcastle's visit, any betting man would suggest the 3-0 scoreline and I would categorically agree, but Newcastle being as unpredictable as ever came away with a welcome and well earned 1-1 draw.
After all those glorious years spent at Highbury and only being residence in their new home for four months the Emirates Stadium probably still doesn't feel like 'home' yet to both players and supporters. The old ground was often criticized for lacking atmosphere and with a new 60,000+ stadium you would think this would be resolved, but I'm afraid it's the same as Highbury, with only a pocket of 200 odd fans in the opposite corner of the ground trying to stir the fellow Gooners into vocal action and a 5 minute spell after Henry's equaliser awakining the fans tonsils.
The club could have taking advantage in moving into a new development by asking fans when purchasing their season tickets if they would maybe like to sit in a specially designated 'singing end' of the ground, this would benefit both supporters and most of all be a great lift to the team, but sadly this mustn't have happened because it appears that the mighty Arsenal have moved from the quiet library to the quiet art gallery.
match report@-http://news.bbc.co.uk/sport1/hi/football/eng_prem/6138794.stm
'Simple Piemans' view @-http://pieandmushypeas.blogspot.com/2006/11/arsenal-fc.html
(click for larger pics) 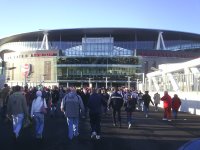 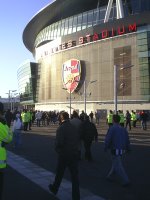 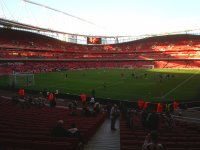 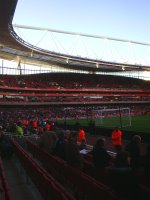 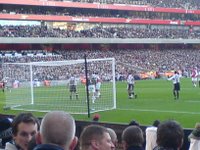 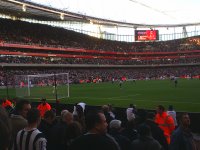 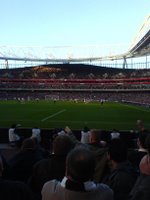 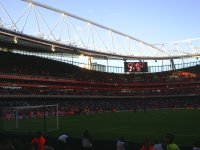 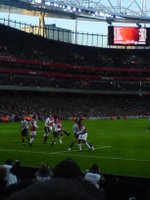 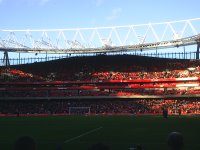 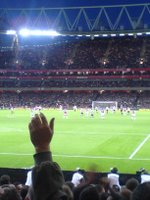 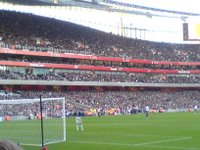 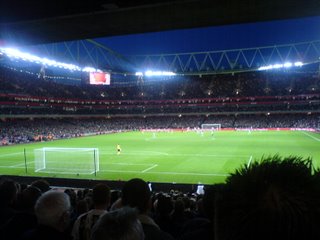 Thanks to simplepieman for passing on the link. As an Arsenal regular for 30 years - albeit with kids tagging along for the last few - I have to say that I'd never heard of the pub you mentioned either! I can't disagree that The Emirates, like Highbury before it, does lack atmosphere. I wonder though whether this has something to do with charging £1000+ to sit behind the goal, and only allowing kids concessions (at £350...) in the Family Enclosure. If I was a lad starting to follow Arsenal these days I think I'd have to make do with MOTD!!

Cheers Mick!
The point I was trying to get across regarding atmosphere was with the club moving,it was a good chance to get the fans who like to sing at the match,to be put within the same section of the ground,maybe in the lower tier behind the goal.
Handsome looking stadium though ;-)

Pieman said...
This comment has been removed by the author.
6:02 pm

The pub has been around longer than you and I Mick but I will concede that it is unlikely that any of your regular routes would have took you past it. The other probability is that you just do not rememember it. Some of those guys that you used to drink with probably woke up on a Sunday morning with no recollection that they had even been to a match the day before (Dave Butcher ?) - not suggesting for one moment that you were ever like them of course!

I think its fair to say that Arsenal FC have ever so slightly lost touch with the fans.... The Emirates (oh, ok then "Ashburton Grove") generates higher gate receipts than ANY other club - inc ManUre! Methinks that we'll have to wait until post-Wenger for the club to re-engage i.e. when crowds start to dip back down to the mid 30,000 of not so long ago! PS simplepieman must mistake me for someone else. I'm teetotal!!