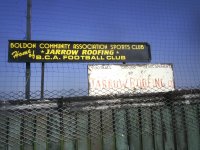 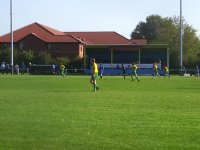 With Newcastles match against Everton moved to Sunday with it being the live Sky TV game I took the opportunity
to tick off another Arngrove Northern League(the 2nd oldest league in the world)ground of my list.I took the short trip along the Tyne to Boldon Community Association Sports Ground,home of 'The Roofers' for their F.A. Vase clash with Pontefract Collieries.

In 1991 Jarrow Roofing developed an unused site in Boldon as part of their long term ambition to progress to the Northern League.After progressing through the pyramid via the Wearside League,their ambition was fulfilled when they took their place in the Northern League Division 2 for the 1996/97 season when they finished runners-up to Northallerton, and they've consolidated there position in the top league ever since.
I was expecting an entertaining game with plenty of goals,'The Roofers' first 10 games this season has produced 55 goals including two 5-2 wins,a 5-4 win but also two 5-1 defeats.I wasn't dissapointed either,after a competitive first half the scores were level at 1-1 and just before half-time Pontefract were awarded a penalty,when the kick was awarded a young Pontefract fan turned to the few of us sitting in the main stand and said "Me Dad takes the penalties,he's bount to miss",his Dad didn't let him down either as he smashed his effort against the bar.In the 2nd half Jarrow got a grip on the game and hit the Yorkshiremen with a three goal burst early in the second half and ran out convincing winners by four goals to one.
So 'The Roofers' progress in to the next round of the FA Vase where they'll be hoping to go one better than their performance in this competition 2 years ago, where they lost out at the semi-final stage to Didcot Town in front of a record crowd of 1,100. Good Luck to them :-)
match report @- http://www.jarrowroofingboldoncafc.co.uk/REPORTS.HTM 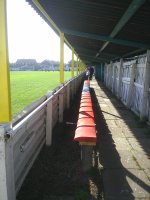 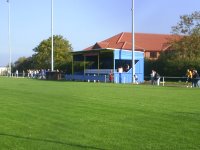 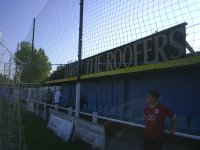 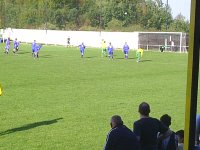 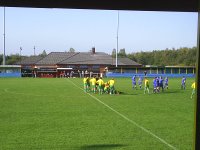 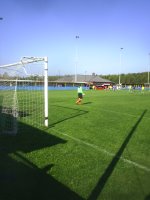 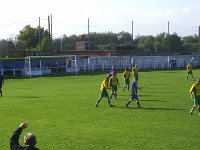 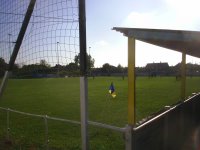 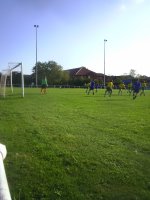