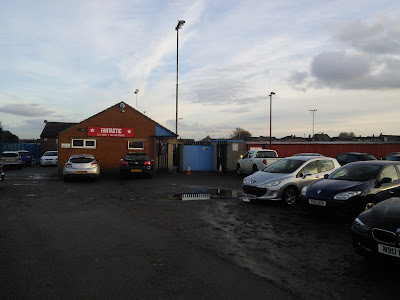 One of the many grounds I’ve been planing to visit for a long while is the Welfare Ground in Emley. This week me and the breadknife are on leave from work, and as per-usual we had a night away out on the lash. For this weekend we decided to give Huddersfield a go, as the town has plenty of entrants in the Good Beers Guide, a couple of ‘Spoons and a decent injuns!
We stopped off for lunch in Cleckheaton before arriving at our guest house in Huddersfield at 2.15pm. After quickly checking in I shot off along the Wakefield Road to Emley.

The village has a population of just under two thousand, its name derives from an Old English personal name, Em(m)a or Eama, and leah, a wood or woodland clearing. The village was recorded in the 1086 Domesday Book as Amalaie and Amelaiand becoming Emmeley by the 13th century. The Saxon settlement was at Emley Park, with invading Danes settling in the area in the 9th century, as indicated by place names ending in by and thorpe.
Farming was the chief industry in Emley, then by the 19th century rich deposits of coal had made mining an important industry along with the more traditional weaving. The Emley Moor Colliery was the main employment in the village until it closed in 1985 after the year-long miners' strike. The site of the old pit is now a business park. 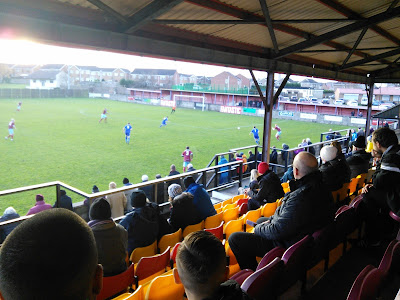 The original Emley AFC formed in 1903 and played in the village until 2000, when they moved to Wakefield due to new ground regulations imposed by the Northern Premier League, as the were unable to meet the necessary ground grading. The move lead to a name change in 2003, becoming Wakefield & Emley FC. which upset their loyal supporters, especially when the club’s reserve side, the only remaining link to the Welfare Ground was discontinued by the NCEL..
Following the disbanding of the reserves, several former Emley members and fans formed the current club in 2005, moving back to their home village. During their debut season, AFC Emley finished third in the West Yorkshire League Division One and quickly stepped up into the Northern Counties East Football League Division One the following season.
The club now run both a successful development team in the Lancashire League (East) and a youth side. The senior side had their best season to date last term when they finished 4th in the NCEL Division One. 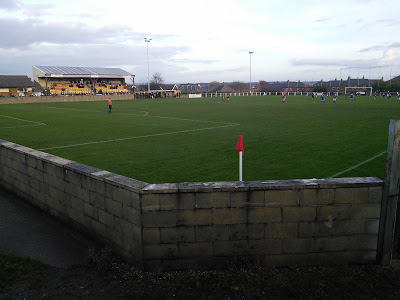 Welfare Ground had been used for rugby in the late 19th century, before football came to prominence in the village. The ground was used by a host of clubs in the village with the White Horse pub used as changing rooms and the headquarters of Emley AFC.
The Main Stand is the classic welfare style structure with elevated seating with stair access at the front. The stand opened in September 1989 and sits on the halfway line, filled with 330 yellow flip seats. The ground has a capacity of 2,000 with covered terracing at the entrance goal and open standing at the far end. The changing room block and social club which opened in 1972, runs between the turnstile and the stand. The ground is three sided with a fence down one side separating the neighbouring cricket pitch. The Floodlights were first switched on in 1981 with Huddersfield Town providing the opposition for the first match under lights. 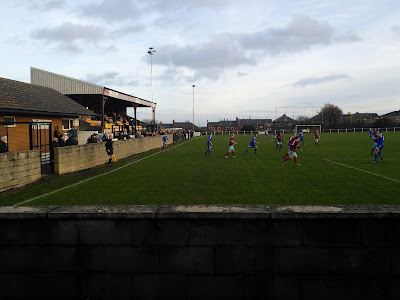 AFC Emley went into the game in 6th position, their opponents Winterton Rangers three points and two places below them in eighth. The match was a cracker, getting off to a controversial start, with an effort in the 3rd minute crashing off the crossbar (and from where I was standing, next to the corner flag) bouncing over the line and back out. The referee and linesman seemed unsure so no goal was giving.
The hosts soon took charge with Matthew Jackson firing in from close range following a corner kick, before Ashley Flynn rifled in a powerful right foot drive. The visitors halved the deficit on 34 minutes when Matthew Crane headed in at the far post from a corner, but the two goal cushion was soon restored when Flynn got on the end of a perfect Aaron Joseph cross.
Emley finally added to the score with twenty minutes remaining, when an effort from substitute Alex Slack hit the defender before falling nicely into his path to smash in on the volley from 20 yards.
That seemed to be game over, but on 77 minutes Rangers pulled one back as Jamie Richardson capitalised on some slack defending, then seconds later Crane grabbed his second to make it 4-3.
The match could have gone either way but Emley hung on to claim the three points which takes them up to fifth in the table. 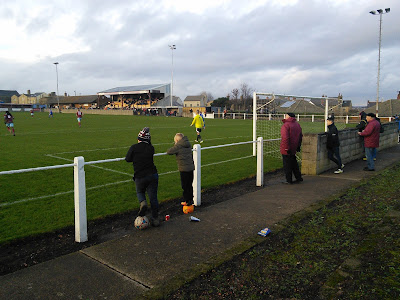 After a cracking game through the day, a cracking night out in Huddersfield. Our pub crawl saw us supping in the Grove, Rat & Ratchet, The Star Inn, Lord Wilson, Cherry Tree, Kings Head and the Head of Steam. All these pubs had a fabulous choice of ales and the night was rounded off with a gutbusting meal at Lala’s Restaurant, so overall a Saturday belter! 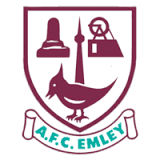