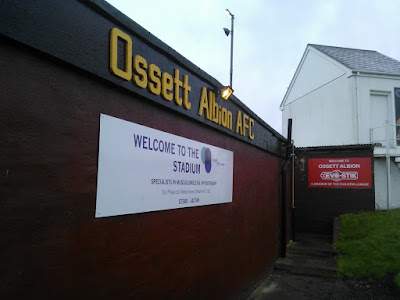 Ossett is a market town within the metropolitan district of the City of Wakefield in the West Riding of Yorkshire. Ossett appears in the 1086 Domesday Book as "Osleset”  its name deriving from the Anglo Saxon as either "the fold of a man named Osla" or "a fold frequented by blackbirds” Coal-mining was the major source of employment, with a large number of pits around the town during the 19th and 20th centuries, and was once a thriving industrial centre with a number of small mills with a good reputation of producing high-quality products.
Novelist Stan Barstow, the author of A Kind Of Loving lived most of his live in the town, as well as crime writer and The Damned United author David Peace who set the first six of his books in the West Riding. Ossett is also the birthplace of annoying 80s pop combo Black Lace, plus veteran Coronation Street actress Helen Worth who plays Gail McIntyre in the soap(Its a Camel !...Eddy) 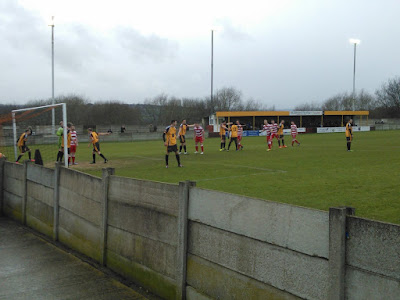 Ossett Albion formed as a junior club in 1944, eventually playing at a senior level and winning honours in the West Riding County Amateur and West Yorkshire leagues. In 1957 they joined the Yorkshire League Division Two, winning promotion in their second season, before finishing runner up to League champions Farsley Celtic in 1960. The club played within the two divisions of the Yorkshire League until it merged with the Midland League in 1982, winning the First Division title once in 1974-75. 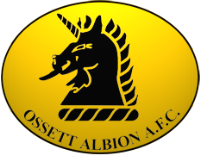 Albion were placed in Northern Counties East League Division 1, winning the League Cup in 1984 before going on to win promotion to the Premier Division in 1987.The club were League champions in 1999, but were denied promotion to the Northern Premier League Division One, due to the size of one of their changing rooms, however they gained admission two years later after finishing runners-up to Brigg Town. The club were relegated but won the NCEL title in 2003-04 and have played in the Northern Premier League Division One ever since. Albion have also gained honours in the West Riding County Cup, winning the trophy three times during the sixties and more recently in 1999, as well as the West Yorkshire League Cup in 1976 and 1977. 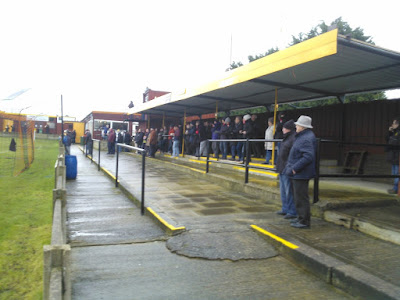 Dimple Wells is The Unicorns fourth home, originally played at the Church Street Recreation Ground, followed by both Beck Lane and Kingsway grounds.The club made an agreement with the local cricket club  to use a stretch of land which was previously an old tip on Queens Terrace. Albion ground shared with Ossett Town at Fern House for five years until gaining possession of the ground in 1955, where a grandstand was built on one side, changing rooms next to the pavillion and terracing alongside the cricket field. The ground didn’t change much until the club became founder members of the Northern Counties League, which saw a revamp throughout the 1980s .Improvements included a perimeter wall, dug-outs, turnstiles and floodlights erected in 1986, used for the first time against Leeds United which produced the ground’s record attendance of 1,200. The following year new changing rooms were built with closer access to the pitch and the ground was completed with hard standing on all sides and cover behind both goals.
During the 1990s the grandstand was refurbished which sits at the far side of the slope, decked out with three rows of flip seats and painted in the club colours. The ground is now known as the Our Physio Stadium and has a capacity of 3,000. 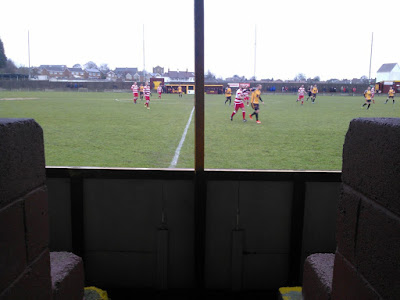 A bad tempered affair played within a hostile atmosphere from the visiting supporters, was settled on 66 minutes, when a corner from the right was met by a powerful header from skipper Danny South. The Boro’s task wasn’t helped when the referee(who seemed to wind up the Scarborough supporters throughout) harshly sent off ‘keeper Nick Draper on 79 minutes when he collided with Rob Bordman on the edge of the box.
There was an unsavoury incident on the half time whistle when someone within the visitors section racially abused Adam Jones. There was an announcement at half time that the match could be abandoned if there was a repeat of this behaviour, but thankfully there was no intolerable conduct during the second half. 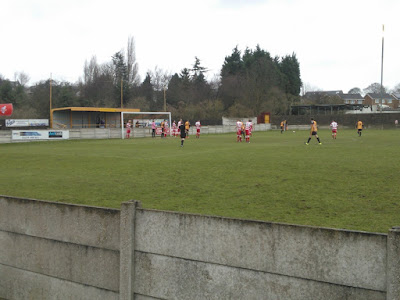 The Gadabout.
103 miles to ground door-to-door
Me and the breadknife left our house in the trusted hands of our daughter Laura for her 20th birthday party to head off for a night out and stopover in Wakefield. On route we called into Dewsbury, for lunch and another ‘Spoons tick before the short drive onto Ossett. After parking the car at the ground we called into the Ossett Tap for a drink, where Debra stayed there for the rest of the afternoon while I was at the game. We arrived at out hotel at 5.20 and enjoyed a good night out in Wakey. My favourite pub of the half a dozen I supped in was The Hop, where they had a good selection of ales, a good choice of music and a live band. So all in all a cracking Saturday in West Yorkshire.