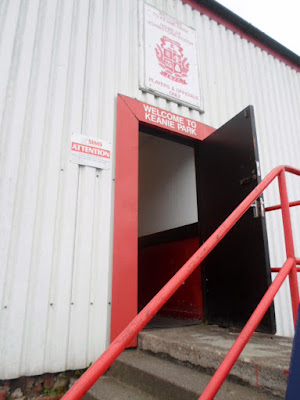 Whereabouts and Whatsabouts
The Renfrewshire town of Johnstone lies 12 miles west of Glasgow city centre and just 3 miles from the neighbouring town of Paisley, found on the edge of the Greater Glasgow Urban Area.
The town was a planned community created and designed by the local Laird, George Ludovic Houston who held an estate in the town, the remains of which are known as Johnstone Castle.
The town’s early population was around 1,500, which included the local estate and rural hinterland.George Houston became 4th Laird of Johnstone in 1757 at the age of 14. During his 58 years as Laird, George extended Johnstone Castle, developed the extensive coal mines at nearby Quarrelton and opened lime works at Floor Craig. In 1781 he began selling land for housing near the Bridge of Johnstone for the layout of a new town. Houston designed street plans, two mirroring civic squares: Houstoun Square and Ludovic Square and by 1794 the town had gained its current parish church.
Johnstone developed through its main industry of thread-making and cotton weaving, with mills powered by the Black Cart Water which runs to the north of the town. The community expanded in the 1930s with freshly built residential estates, which addressed the problem of population density in the historic area of the town. Nowadays it chiefly serves as a commuter town for Paisley and Glasgow with a population of almost 16,000. 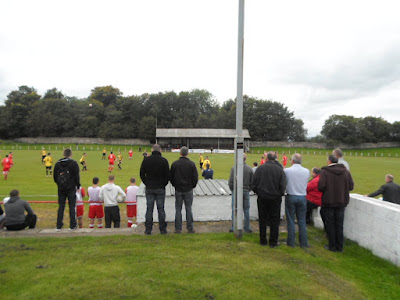 Plantpot History
During the many years writing this blog I’ve researched hundreds of clubs, but the formation of Johnstone Burgh in 1956 is quite unique. The club emerged from a newspaper article in the "Johnstone & Linwood Gazette” after a journalist had been ordered out of the newspaper's office by his gaffer with orders not to return until he had a story. The journalist in question stood on the corner of Johnstone's Rankine Street and proceeded to ask locals their thoughts about forming a new football club to replace the former Scottish league side Johnstone FC. 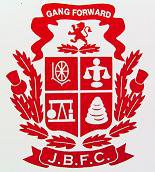 From the article a new Junior football club was born and The Burgh soon found success, winning the treble of Central League, the West of Scotland Cup and the Glasgow Dryburgh Cup in 1958-59. Under the leadership of Jimmy Blackburn they won two league titles in the 1960s, as well as lifting the prestigious Junior Cup twice. In 1964 they beat Cambuslang Rangers 3-0 in a replay after a 1-1 draw, then four years later a second tie was again required, after a 2-2 draw they overcame Glenrothes 4-3 with Hugh Glishan grabbing the winner in extra time.
It wasn’t until the turn of the millennium that the Burgh reached their third final and yet again the final finished in a draw. The club faced Whitburn with goals from Colin Lindsay and John McLay saw the match finish all square after extra time. Johnstone Burgh won on penalties in their semi-final at Love Street, but failed to repeat this success in the 2000 final, losing the penalty shoot out by four goals to three.
The following season they won the Central League Premier Division and since the rejigging of the leagues, they were Central District Second Division champions in 2009-10. Last term they finished runners-up to Rossvale in the Second Division, so return to Central Division One after they were relegated in 2011. 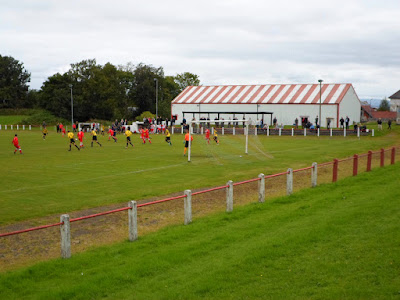 The club have been based at James Y. Keanie Park since their formation, named after the builder who donated the land on which the ground was built. There is a barrel roofed covered terrace at the far side which sits on the halfway line with grass banking behind both goals. At the paying entrance side there's the main building which houses the changing rooms, toilets and the snack bar. In front of this is a wooden shelter on the grass verge, with a few terraced steps leading down to the brick dugouts.

For a number of years there have been plans in place to relocate to a new ground at Thomas Shanks Memorial Park less than one mile away, built in conjunction with the local council. I don’t know if this will ever come to fruition, but there has to be a solution to the drainage problems, which makes Keanie Park prone to flooding resulting in the regular postponements. 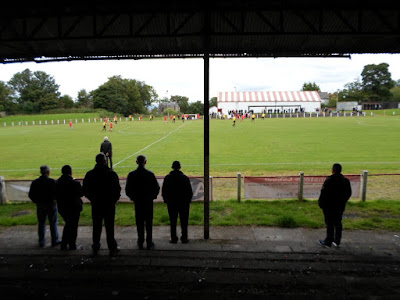 The Match
Johnstone faced table toppers Thorniewood United, who went into this game with maximum points from their first three fixtures. The Burgh wearing their traditional all red kit with white trimmings were under the cosh for most of the first half, with the visitors from Viewpark creating the better chances.
As the game progressed it was beginning to look likely that a solitary goal would settle the result. That golden opportunity fell to Jack Heron on 73 minutes, who latched onto a flicked header to find himself clear on goal, making no mistake to fire under the 'keeper and break the deadlock.
The hosts almost immediately blew their lead, when just two minutes later a reckless challenge just inside the penalty area gave the referee an easy decision to award a spot kick. The Thorniewood number 7 Lennon had been in the running for my top bloke of the match award, but his penalty was saved and the easier chance from the follow up was blasting over the bar and into the grass banking behind the goal.
The Burgh wrapped up the victory two minutes from time when a neat ball was threaded into the path of substitute Jason Hardie, who fired a first time effort past the Wood 'keeper, then a minute later Thorniewood's miserable afternoon was complete when Cherrie was sent off for handball just outside the box. This win puts the Burgh level with Thorniewood and there’s now five clubs sharing top spot after winning three of their first four fixtures. 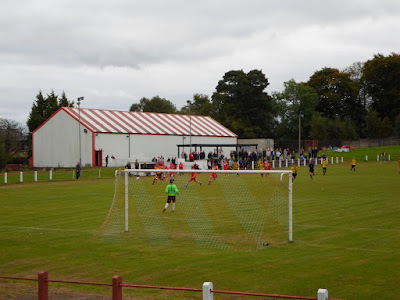 My Matchday
My original plan for today was to tick off one of the East Region clubs, with Whitburn Juniors first choice as a return to their own ground is imminent. After the release of the latest round of fixtures, it turned out to be the only option in the east from my t'do list. That was until they announcing on Wednesday that Central Park still isn't ready yet, so a quick look at the fixtures meant booking further trains to Johnstone Burgh, as this was one of only two choices available in the west.
I left Newcastle on the 0945 and travelled straight to Johnstone, without refreshment stops in Edinburgh or Glasgow, so I arrived just over three hours from my departure. During my preparation I discovered there are two pubs in the Good Beer Guide in Johnstone so I had a few bevvys in Callum’s and Rennies before the 2 o'clock kick off.
There is a regular train service back to Glasgow, so I was in The Horse Shoe Bar by half four to check out the incoming full time scores, which was disastrous in regards to my two teams on each side of the River Tyne. My day out was complete with a drink at the Jinglin Geordie in Edinburgh before catching the 1900 train home.
Another good day north of the border which now takes project: “From the Toon to the Scottish Joons” (working title) up to 15 ticks from the 27 on the list. I’m satisfied with the progress I’m making and well on course to finish it in the next 12 months. There won’t be another trip now until two planned visits in November, but there’s already obstacles blocking my path, however I’m up for the challenge to make sure I hit the north twice before Christmas. 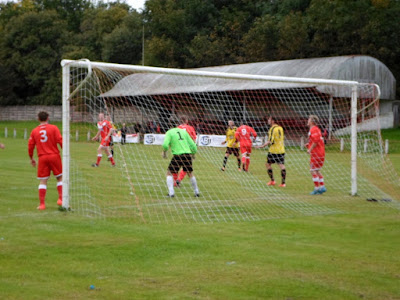 Footnote
I'm writing a book on the winners of the Scottish Junior Cup over the last 50 years, which will include a more detailed account of my trip to Johnstone. This chapter features a former Burgh player who lives just down to road from me and more insight on the GBG bible. 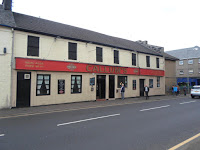 Edit. Stupid, stupid me. I've just realised(Monday afternoon)that I had walked into Colliers Bar, not Rennie's.