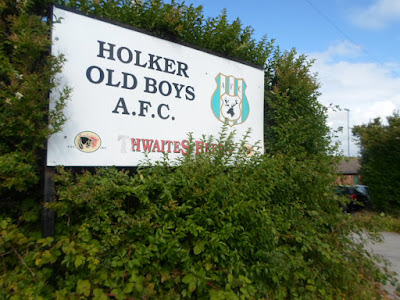 Following on from catching Dunston’s emphatic win in the FA Cup at Crook Town a fortnight ago, I was keen to see them progress further in the competition. After my Saturday shift at work I jumped into the car and drove to the tip of the Furness peninsula from their Preliminary Round tie with Holker Old Boys.

The football club started life as a school team, formed by the under-16s from the Holker Central Secondary School in 1936. The club originally competed in the West Lancashire League before joining the North West Counties Football League Division Two in 1991, winning promotion in their third season.
The club played at step 5 for five seasons until they were relegated in 1999. The closest they’ve come to returning to the NWCL top division was last season, when after a 5th place finish they lost the play-off semi-final match 3-1 away at Hanley Town. 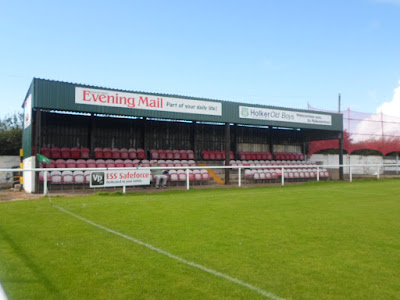 The club play in Barrow-in-Furness, a town I visited back in 2009 for what turned out to be a Christmas cracker. Their home ground is found just off the A590, on the outskirts of the town next to the Barrow Golf Club. The club have played at Rakesmoor Lane since 1972, which has a capacity of 1,750, made up of a 220 seated stand and open standing all around. The stand is at the entrance between the corner flag and the goal, with the clubhouse and changing rooms down one side. There is also some cover on this side but the majority of the roof is missing. Opposite is the team dugouts and there are three sets of lights at each side. Rakesmoor has nice panoramic views of the surrounding countryside, but its exposed location means it’s a bit of a wind trap, so an August visit was ideal.

The biggest attendance at Rakesmoor was 1,240 for a cup game with neighbours Barrow in 1995, although their record gate was 2,300 against F.C. United of Manchester in the 2005–06 season. The match was held at Craven Park, the home ground of Rugby League side Barrow Raiders due to the large away support. 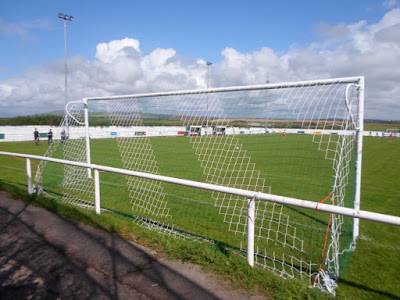 I pulled into the car park just before 2.30, where there wasn’t any spectators around as they were all crammed into the bar watching the Newcastle match. I paid the gentleman at the turnstile £4 for admission and inquired about a programme, but they were all sold out as they don’t print many because of a lack of demand. I went into the clubhouse and caught the dying embers of the game and saw a bloke sitting with a programme, who wasn’t a Dunston fan and judging by his southern accent he didn’t support Holker either, although I deducted he must be a groundhopper judging by the haversacks him and his two mates had with them.
When I visit a new ground I like to get a programme, but if I don’t manage to trouser one I won’t get too upset, however if possible I try and get a photo of the issue instead. I approached the gentleman and when he saw me coming he quickly but the programme away in his giant bag. I said “excuse me” three times before he finally responded, in which time the paperchaser had zipped his bag closed. I asked if I could take a photograph and his reply was “I’ll let you take a picture but that’s all you can do with it” Well, what did he think I was going to do with his valuable piece of paper? Take it into the bog and wipe my arse with it! 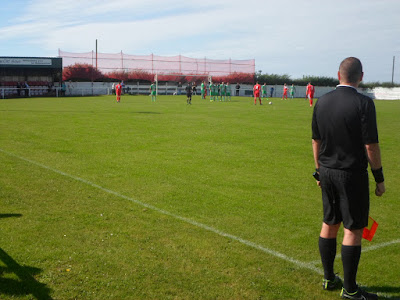 When the game started it was Dunston who kicked against the breeze and up the slope in the first half. After an even contest they took the lead after on the half hour mark, when Luke Gilhespy won the ball in midfield and threaded a ball through to Steven Richardson, who danced ‘round the defender to make himself room for a shot, before firing past the keeper from 12 yards.
Richardson could have had a hat-trick, twice going close in the second half before the game was wrapped up on 76 minutes. A long ball from Wilkinson sent Bulford on his way on the left wing, whose cross picked out the incoming Alex Francis for an easy finish.
A determined Holker side tried to get themselves back in the game, but overall it was a comfortable passage into the First Qualifying Round for Dunston UTS, who face a tricky away tie to either North Shields or Kendal Town on the 12th September. 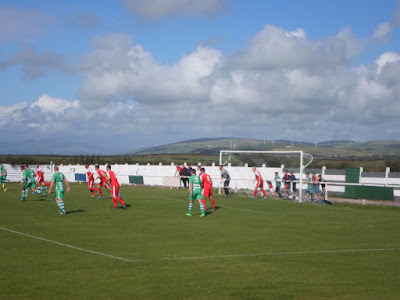 Holker were actually offered promotion in 2011 after initially missing out by finishing 3rd. At the league AGM another club (Formby if I recall rightly) were expelled from the top flight for a breach of league rules and Holker were offered the chance to step up but declined it as they didn't believe they could compete at that level. Fourth place AFC Liverpool were then promoted instead.

That hopper - what a plonker! I'd have been tempted to grab it and run away - see if he gave chase Benny Hill style. Nice pics - I went for an evening game and didn't realise it was such a scenic backdrop.

I remember reading your blog from your visit. Its a good place to visit on a summers afternoon rather than a Tuesday night.

It is but I'm not going back in a hurry! It takes an age even after the M6 bit.