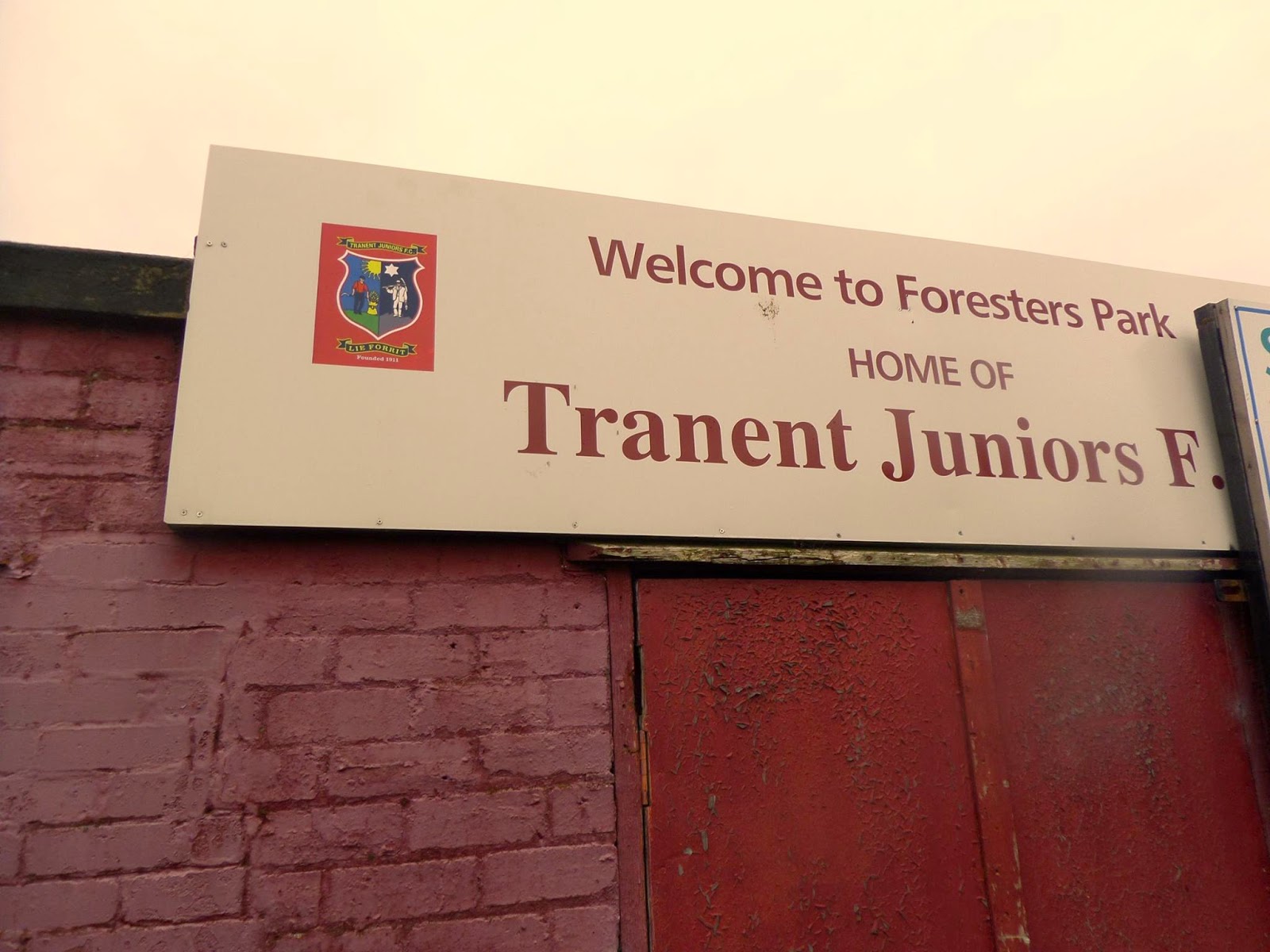 Tranent  is a town in East Lothian, about 11 miles east of Edinburgh, found on the south side of the A1 with a population of around 11,000. The town name derives from the ancient celtic language of Brittonic, made up of Tre and Nant, meaning “town of the stream”.
One of the oldest towns in Haddingtonshire was once a chief mining district, with the first pits opened back in the 12th century, but nowadays Tranent is more a commuter town serving East
Lothian and the Scottish capital.
The Massacre of Tranent took place in 1797, when local people were killed by soldiers after protesting against conscription into the British Militia. One of the 12 victims Jackie Crookston is depicted on the memorial that commemorates those who lost their lives, found in the town’s Civic Square. 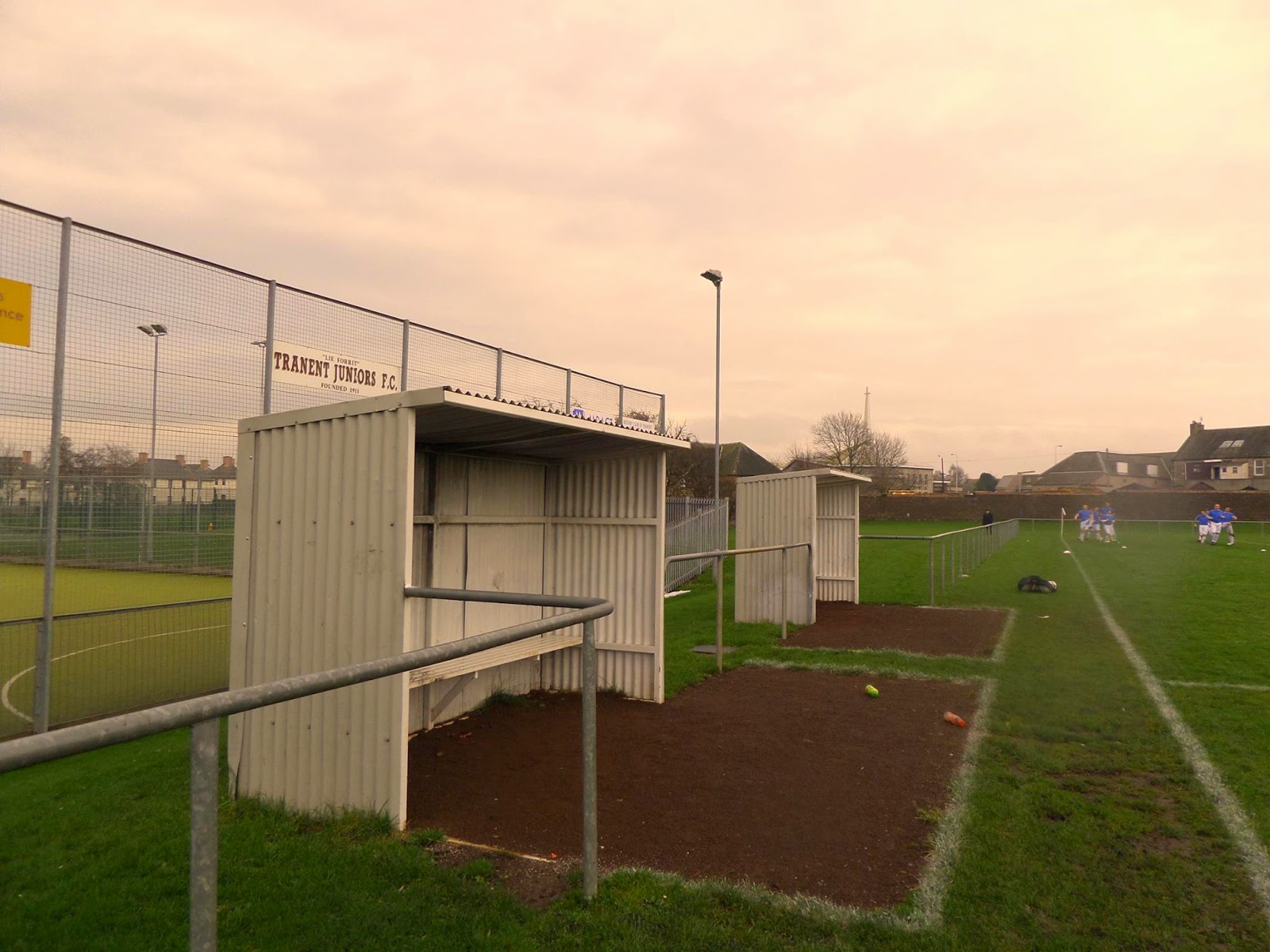 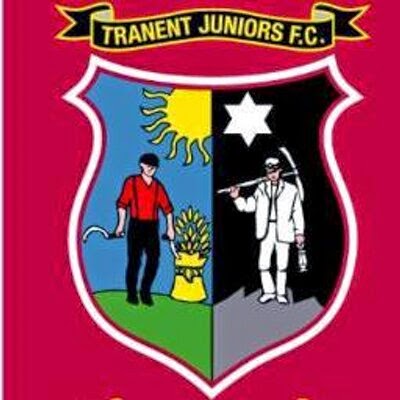 Tranent Juniors F.C. formed in 1911 and are another Scottish Juniors club I’ve visited who are previous winners of the prestigious Scottish Junior Cup.(This could a new challenge to try and visit them all) The club reached the final for the first time in 1933, losing out to York Athletic after a replay, however two years later they went one better by hammering Petershill 6-1 in front of 22,000 at Ibrox Park. This scoreline remains the biggest winning margin in a final and was matched by Bonnyrigg Rose in 1966. Tranent are nicknamed The Belters and current play in the South Division of the McBookie.com Scottish Junior East Region 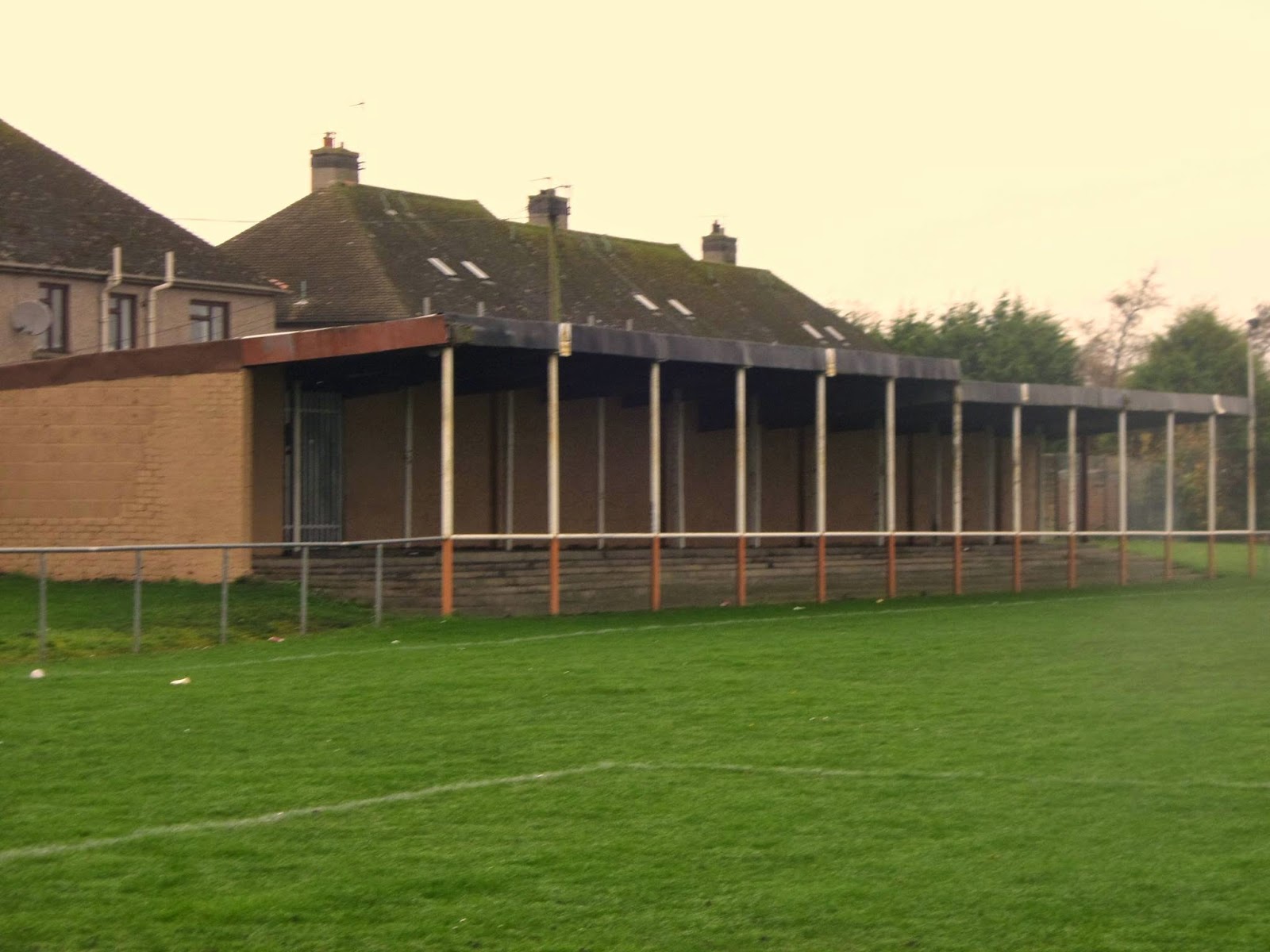 Foresters Park is found just off the main street which runs through Tranent, through a back lane on Haddington Road. The ground has a standing enclosure on one side covering the middle third of the pitch, which has seven large terrace steps with supporting pillars at the front embedded into the perimeter fence. The team dugouts are opposite with the changing rooms which were opened in 2007 at the back next to the main car park, where there's also another admission gate in the corner. The rest of the 2,300 capacity ground is made up of grass banking but unfortunately there’s no clubhouse or refreshment facilities. At the other side of the changing rooms are some 5-a-side pitches and a full size 3G pitch where the Tranent U-21s were in action at the same time as the senior side. 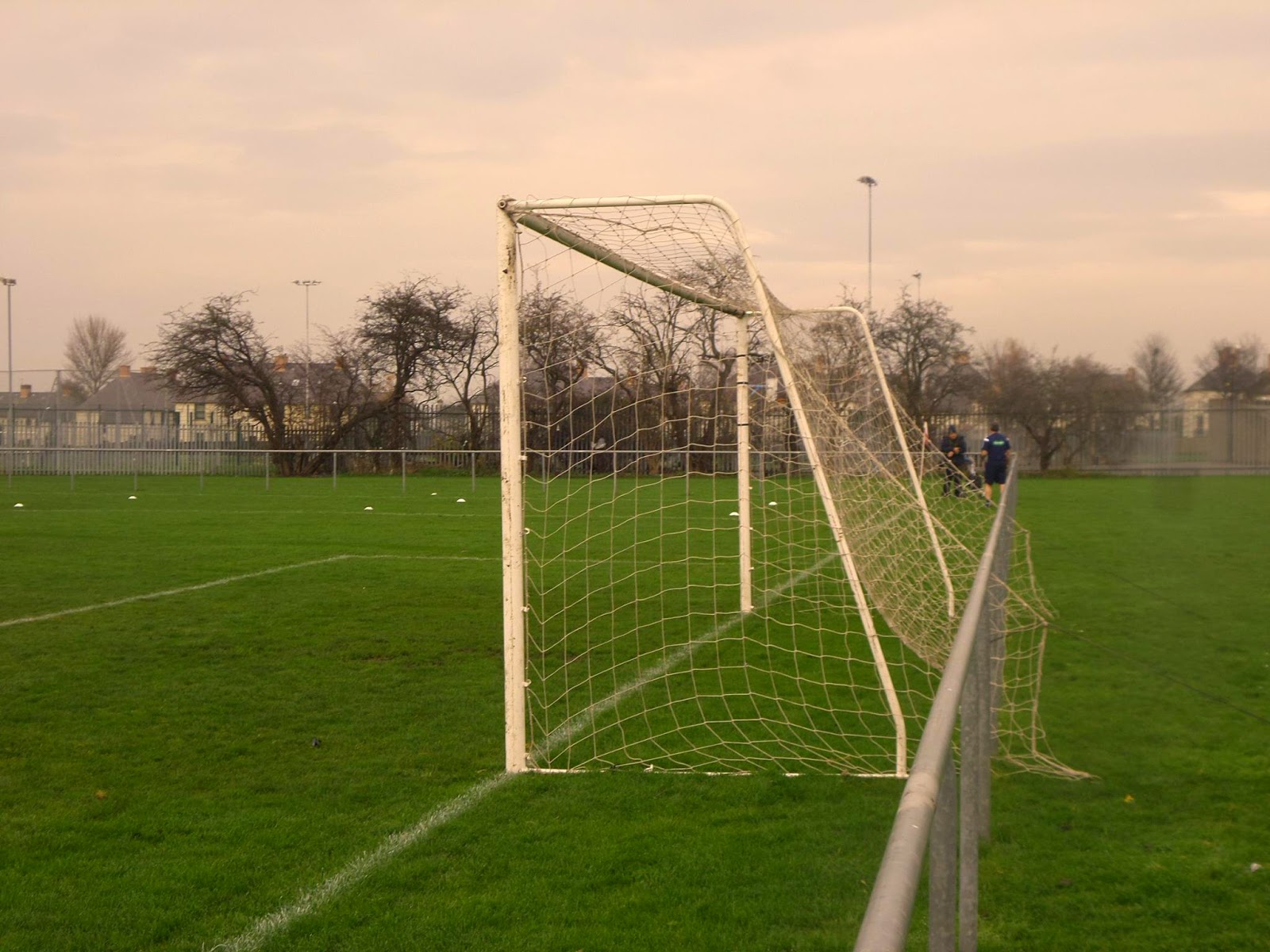 The Match
Both Tranent Juniors and Harthill Royal went into this South Division fixture in a dreadful run of form, so I was expecting an open game with plenty of goals. We didn’t have long to wait for the opener when after six minutes a left wing cross was met with a lovely diving header from Cameron Reynolds. The Tranent centre-forward could have had a hat-trick after wasting two good chances but he was on hand to fire home for six yards and double his tally on the half hour.
Harthill didn’t create much but with their first meaningful attack they halved the deficit on 36 minutes when Alex Cummings struck home from the edge of the box, only for the hosts to restore the two goal cushion minutes later, when a 20 yard free kick from Darren Ramsay hit the defensive wall before he smashed home the rebound.
Tranent made it 4-1 in the 50th minute when some neat build up play was rounded off by the Ramsay for his second of the afternoon. The visiting goalkeeper pulled off a string of fine saves to keep the score down and his team mates made the score look a bit more respectable when Alex Wade pulled a goal back in the final minute. So a good game and it turned out to be a good choice as the other matches on our short list didn’t produce as many goals. 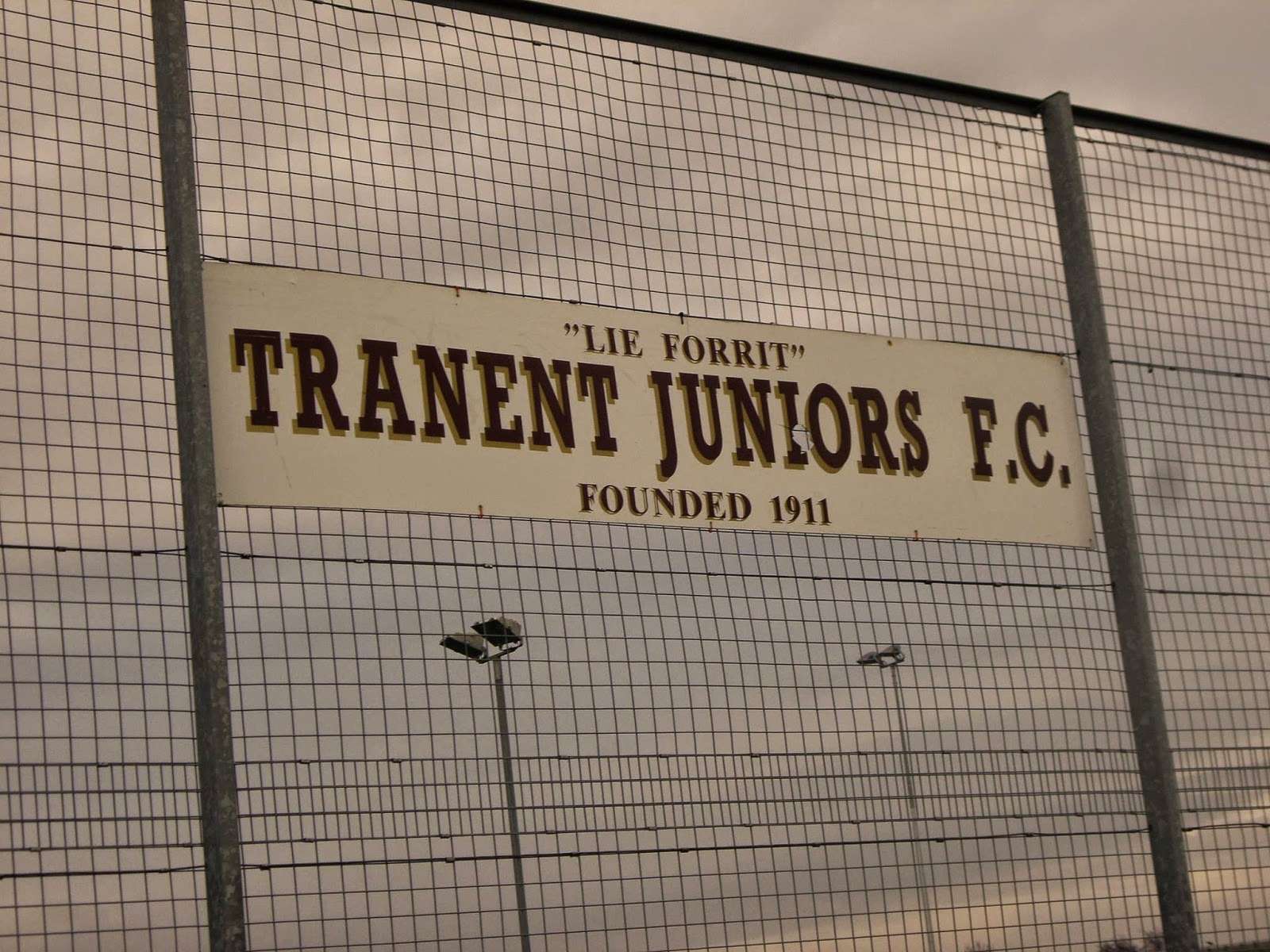 My Matchday
What a splendid Matchday, well it was until I got back home and discovered I had lost my camera. I arrive in Edinburgh Waverley at 12.10 where I was quickly joined by 100FgC AF#33 Mark Wilkins who had travelled up from London Kings Cross. My ground total is currently in the four hundred and twenties but this total is bobbins in comparison to Mark as he’s now in the two thousands and eighties!
We heading to the bus stop on Waterloo Place to catch the 104 bus service to Tranent which was cheaply priced at only £3.50 return. The bus journey took around half an hour so on arrival we headed straight to the ground, being the first to enter Foresters Park for the 1.45 kick off. Gradually the crowd grew with a larger presence from south of the border with a Geordie and a Londoner being joined by a car full of 'hoppers from Liverpool.
After watching an entertaining game we had plenty of time for a couple of pints in the town followed by further bevvys in Edinburgh before Mark caught the 1730 and I jumped on the 1830 back to Toon. So a cracking day overall in a friendly place, watching an entertaining game in good company.

At the top of this post I stated that Tranent was another club I've visited, who had won the Holy Grail of Scottish Junior football. This lead me to do a bit of research which shows that since the Scottish Junior Cup started in 1886-87 there's been 66 teams who have lifted the top prize. Out of those winners 14 clubs no longer exist and I've been to 8 of the remaining teams so that makes it 44 former cup winners to visit. This wouldn't be a problem if I'd retired from work and shacked up with Edinburgh based Squad#155 James Little for a couple of years, so I really need to narrow the odds down a bit. In my lifetime (which hits half a century next year) there’s been 28 Junior Cup winners, with only one club no longer around and five I've already ticked, which leaves a doable total of 22. This is a challenge I'm willing to except , I don't know how long it will take but I'm looking forward to it already and made it official by added the relevant information onto my T’Do List.

Foetoes
(some cracking pictures of Foresters Park and the Tranent v Harthill Royal match which was on the camera which now belongs to some lucky bugger in Scotland)
Special thanks to Mark Wilkins for the blog pictures.
on November 30, 2014
Email ThisBlogThis!Share to TwitterShare to FacebookShare to Pinterest
Labels: Harthill Royal, Tranent Juniors