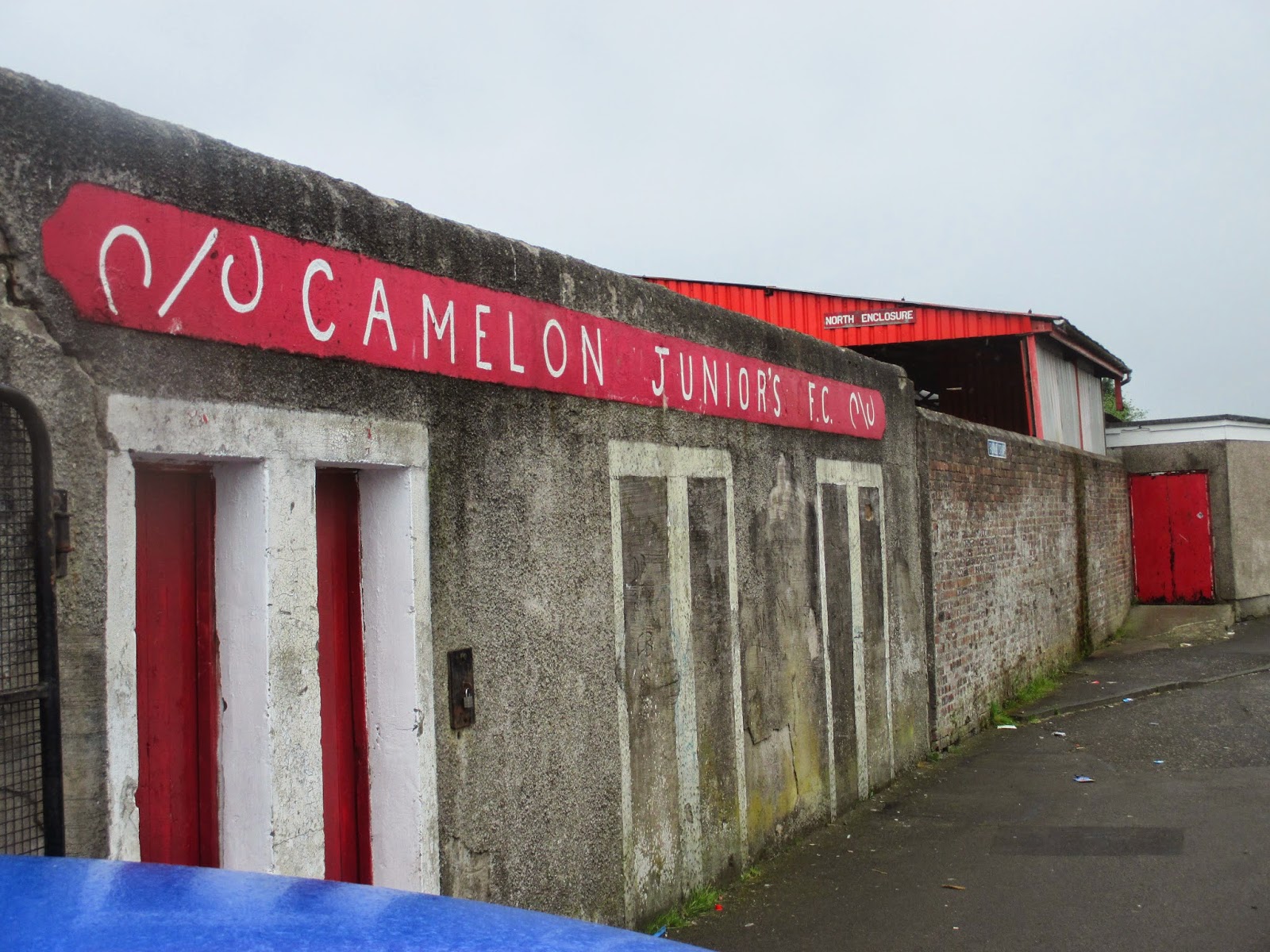 Whereabouts and Whatsabouts
Camelon is a large settlement in the Forth Valley, found just over a mile west of Falkirk town centre, linked by the A803, which is the main road which runs through the village. According to the 2001 census Camelon had a population of 4,508 and was previously the site of a flight of locks which joined the Union Canal with the Forth and Clyde Canal, before being replaced by the Falkirk Wheel in 2002.
Just under a mile north is the site of the Roman fortifications on the Antonine Wall. The first fort built here was between AD80 to AD83 during the campaigns of governor Gnaeus Julius Agricola. The fort was excavated in 1900 and also between 1975 - 1979, when a variety of bronze artefacts dating back to AD86 were discovered. 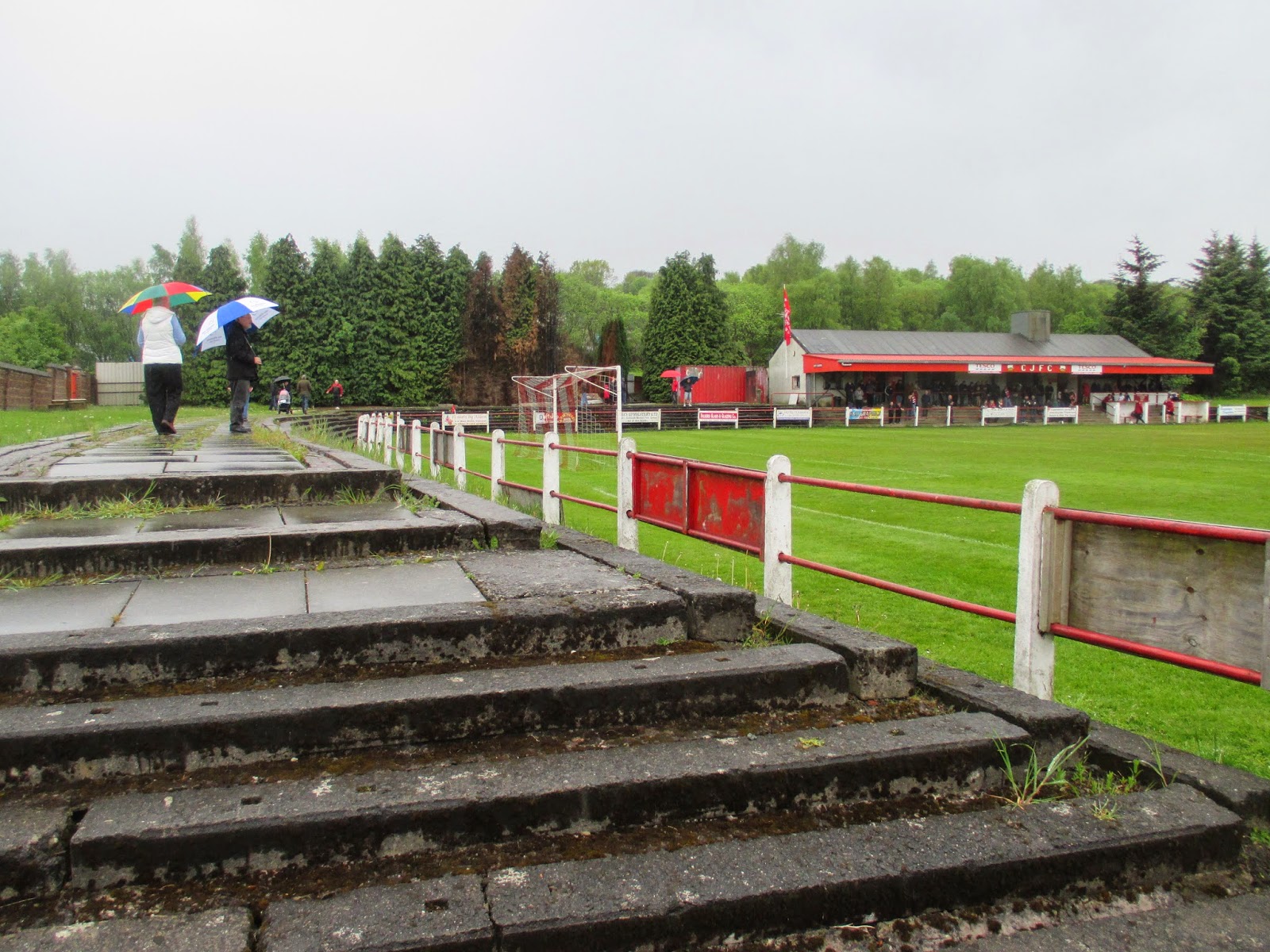 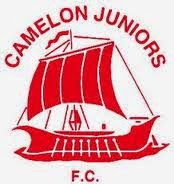 Camelon Juniors was founded in 1920 and were members of the Stirlingshire, Intermediate and Lothian Leagues before reorganisation, when they became members of the East Region of the SJFA. The Mariners reached their first of three Scottish Junior Cup finals in 1952, when they were beaten 1-0 by Kilbirnie Ladeside, before eventually taking honours in the Fife & Lothians Cup in 1971, the Browns Cup in 1977 and were East Region Division One winners in 1979-80.
Camelon enjoyed their most triumphant spell in the mid 1990s, winning the Scottish Junior Cup in 1995 with a 2-0 win over Whitburn and reached the final the following year, but lost out in extra-time to Tayport. During this era their trophy haul included adding two further league titles, the East of Scotland Junior Cup and the Skol League Cup.
In 2005-06 they won they won a second Lothian District League Division One title in three years and completed a double in the Fife & Lothians Cup. The Mariners reached their highest ever position in the Scottish Junior set up in 2008-09 when finishing runners-up to Bonnyrigg Rose in the East Region Superleague. 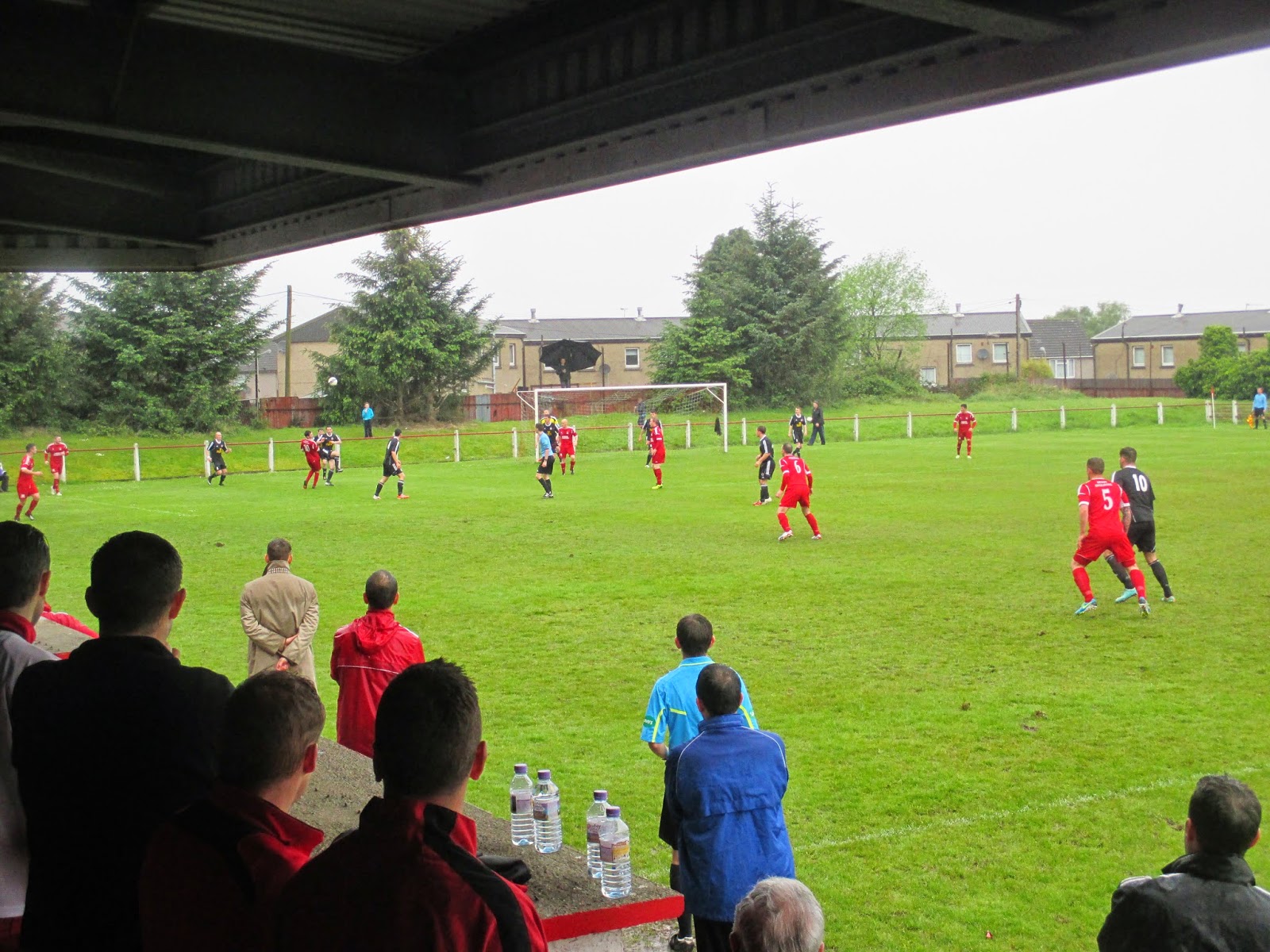 Camelon Juniors played their early days without a home of their own, having to play prestigious Scottish Cup “home” games at the likes of Bo’ness and Stirling. The club committee approached George Strang, a local farmer who had extensive land on the north side of the canal. The landowner was swayed into an agreement when he heard that two of the Camelon players had served in the army, giving the club use of a field on Carmuirs farm.

Carmuirs Park is a typical classic Scottish Juniors ground dominated by terracing. The North Enclosure at the entrance side covers two-thirds of the pitch, while on the canal side there’s a smaller enclosure, with the changing room block, team dugouts and a refreshment bar. Both stands are decked out in red with CJFC and the team crest on the facade. There’s further terracing behind the goal and at the far end there’s grass banking in front of the houses, where one bloke stood on a shed roof watching the watch with a gigantic umbrella. I dunno if he was part of the staff or just a some tight get watching the match for nowt. 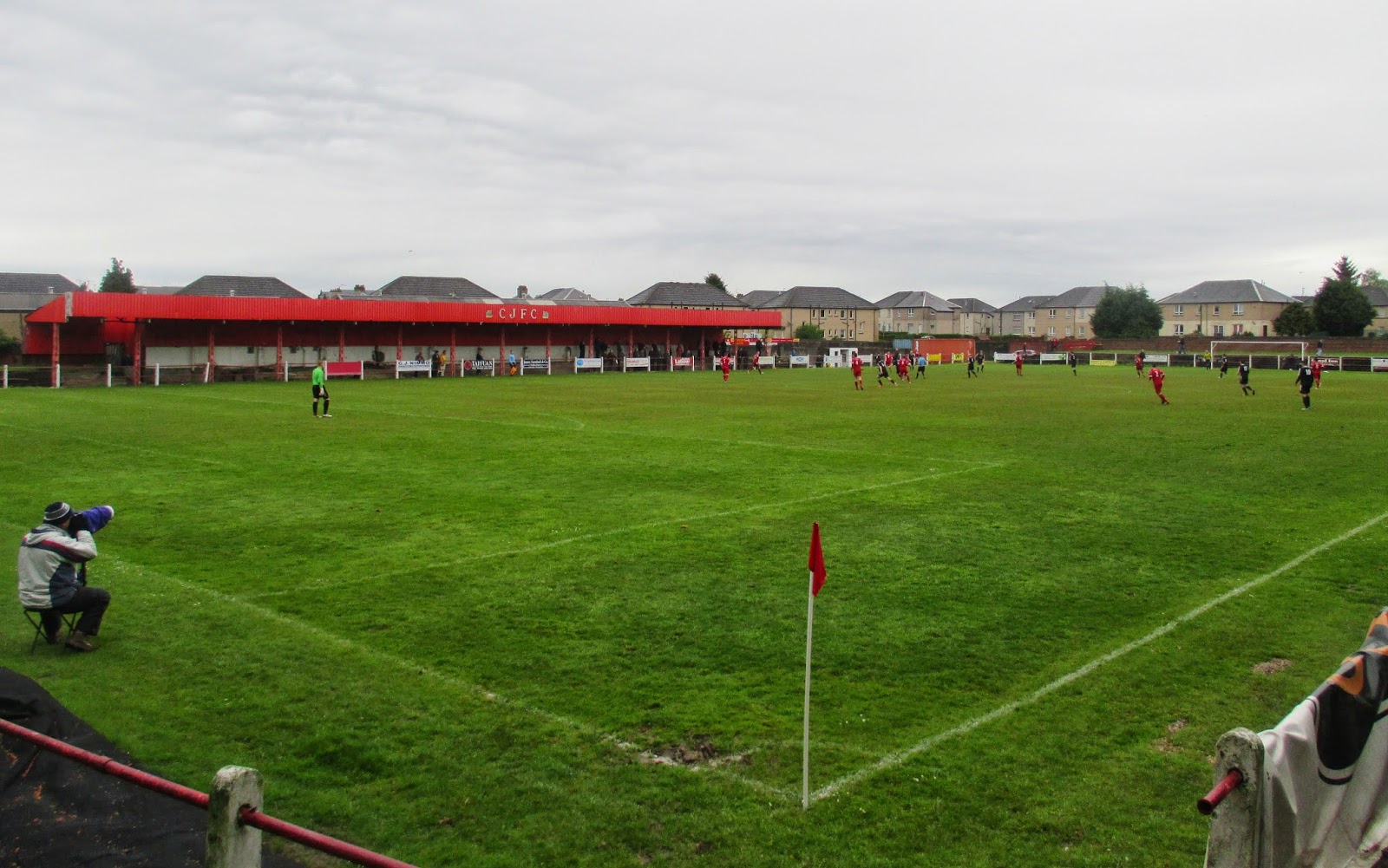 The Match
On the first weekend of glorious hot weather this year, trust me to head to the only part of the UK where it was lashing down. The match kicked off in a heavy downpour, but the home side starting off brightly and deservedly took a 16th minute lead, when the Rose defense failed to clear a Callum Scott cross and the ball fell nicely to Colin Allison to fire home from close range. The visitors levelled twenty minutes later when a lovely cross from McLeish was met by a superb header from Dean Whitson and they finished the half strongly, taking an injury time lead when a clearance from a corner kick was recycled back into the box for Chris Renton to score.
The Mariners levelled just after the hour mark when a lovely passage of build up play was finished off by Stephenson, but they were outdone by a replica goal by Whitson, who again combined with McLeish with a firm header on 77 minutes. Camelon pushed for an equaliser but Bonnyrigg held firm to take the three points in an enjoyable game to finish of my Scottish trips this season.

Spondoolicks
Admission £5
Programme:none
Coffee £1
Pie £1.40
(but didn’t get one because by the time I got hunger pangs early in the second half it was shut) 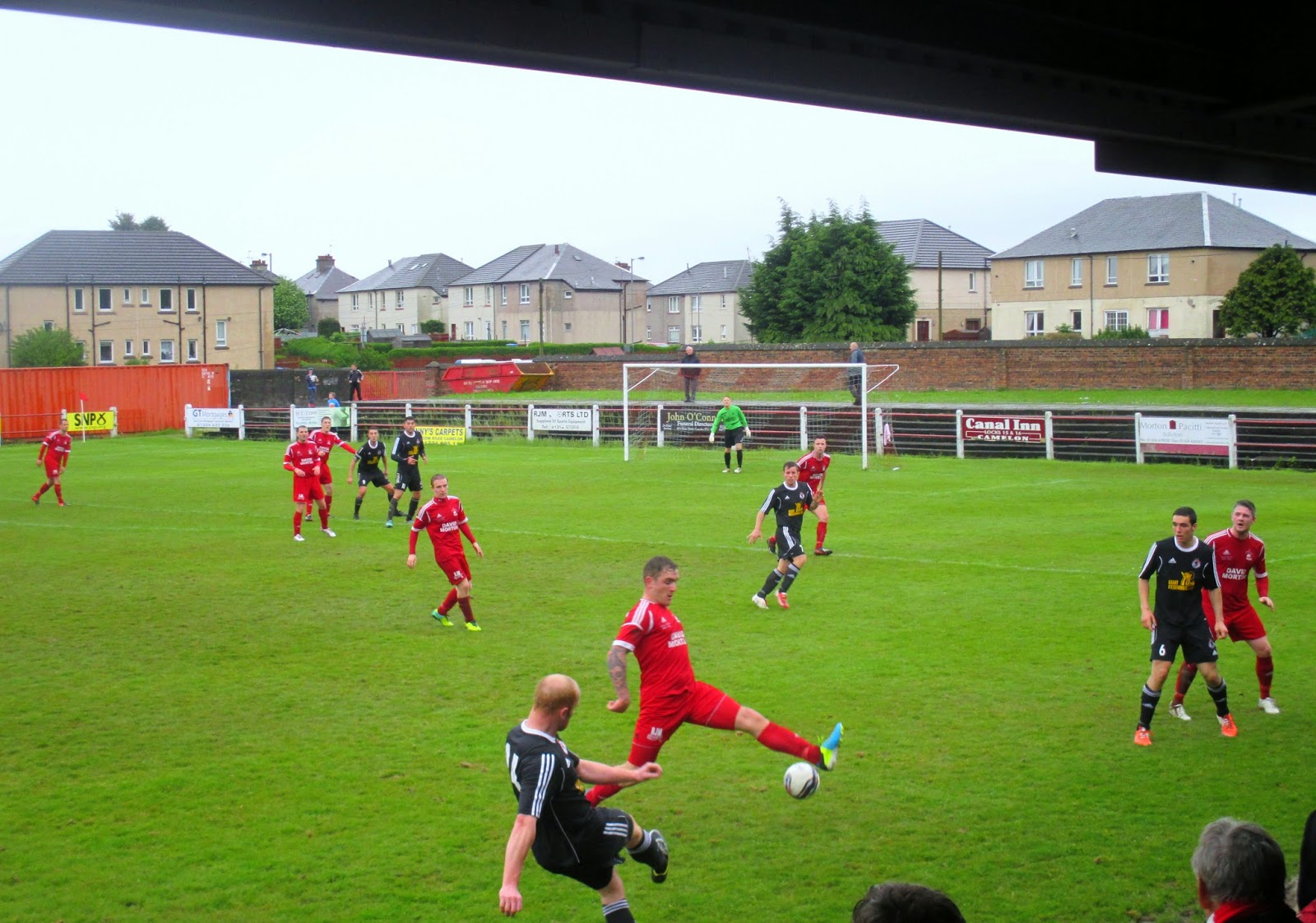 The Rant!
When I head north it seems every time I board the train at Newcastle there's always some daft 'ucker already occupying my pre-booked seat, even though the carriage is half empty and there's plenty of spares. When the train pulled in at Central Station this morning I fully expect some random bloke to be sitting having a picnic and making a mess in a seat I booked three months ago, and of course I was right. I don't have this problem when I'm heading south though, maybe because the Scots and Northumbrians know the correct seating etiquette. Here's a basic tip for any of those ignorant 'ankers who may be reading this, just simply refer to the reservation card on the back of the seat, it really is that simple. 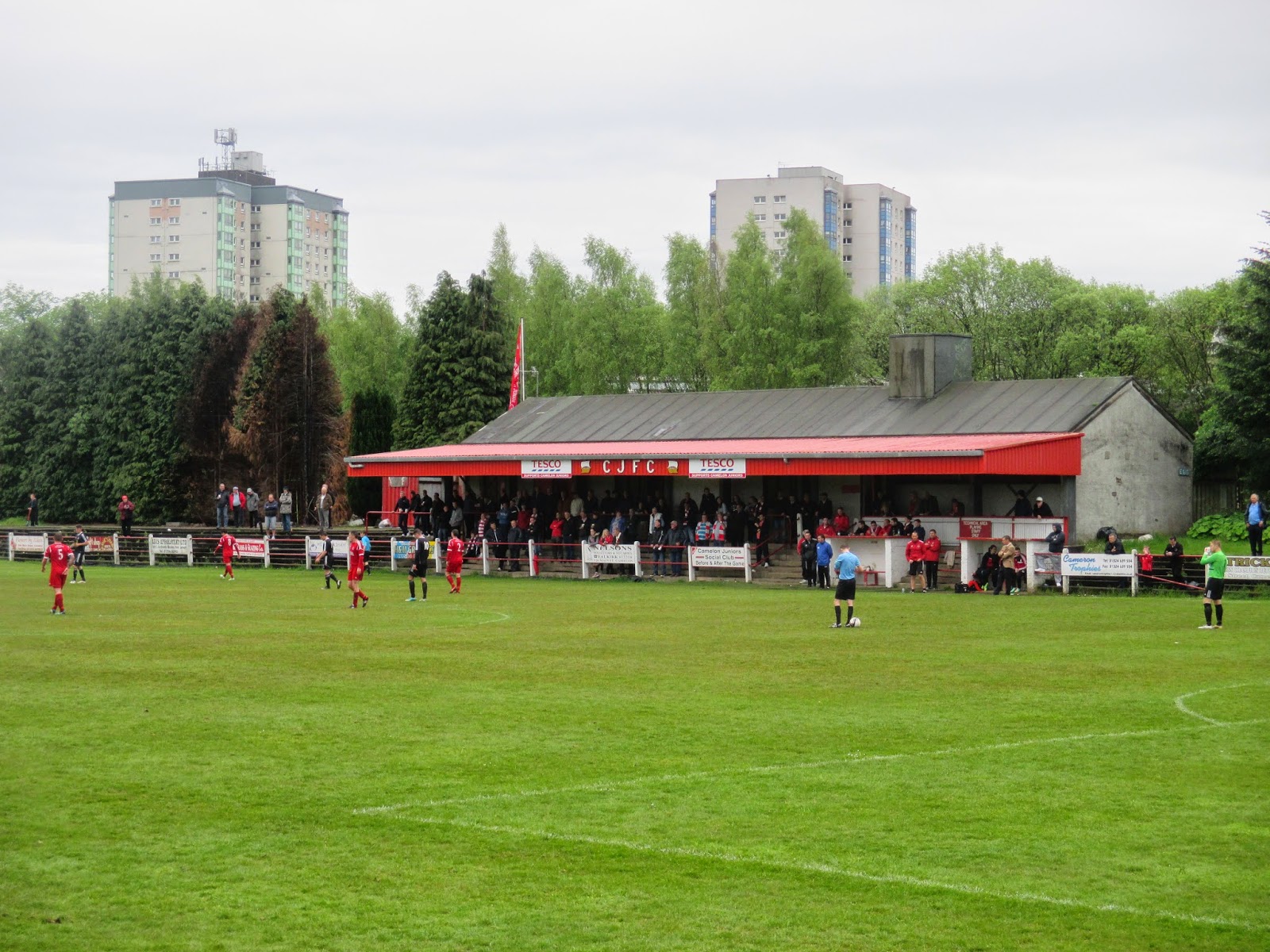 My Matchday
My regular dozen readers will be aware of my normal morning routine once I arrive at Edinburgh Waverley, so I won’t go all Dave channel on you(another repeat) After arriving at 920 I had plenty of time before meeting up with James Little in the Standing Order at noon. We caught the 1303 Dunblane Service to Camelon which is a train line I've got to know pretty well, as this is the fifth different station I've alighted for a game. The journey takes around 35 minutes so we had time for a swift one in the Canal Inn before the 2.30pm kick off. At the game it was good to meet 100FgC AF38 Chris Sanderson who was covering the game for The Scottish Sun. Chris hails from Ashington but now lives in Paisley, reporting on matches in the Scottish Juniors as well as the Scottish League. 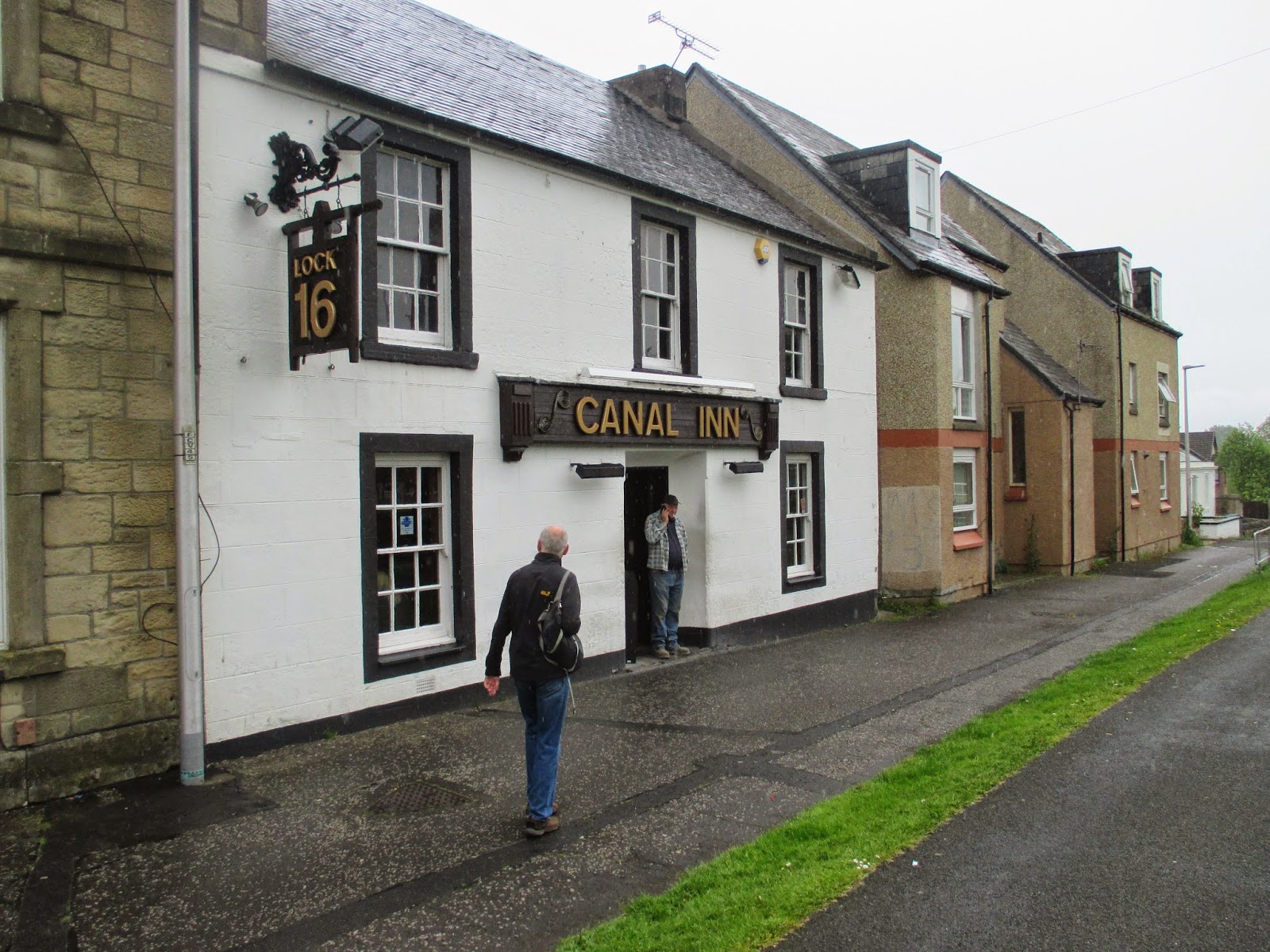 As me and James are fine athletes we ran back to the station in the allotted 7 minutes and caught the 1628 back to Edinburgh, so we had extra time in The Guildford, as this is one of my favourite bars in the city and I’ve never been there for a while. It was a good choice as they had a mini festival of ales from the Big Wolf Brewery as well as a great selection of other beers.
Afterwards I caught the 7pm train and slept all the way home, meaning I didn’t get to write my report on Saturday, and with a trip to Wembley on Sunday, this blog article comes in as an unprofessional Monday night edition. 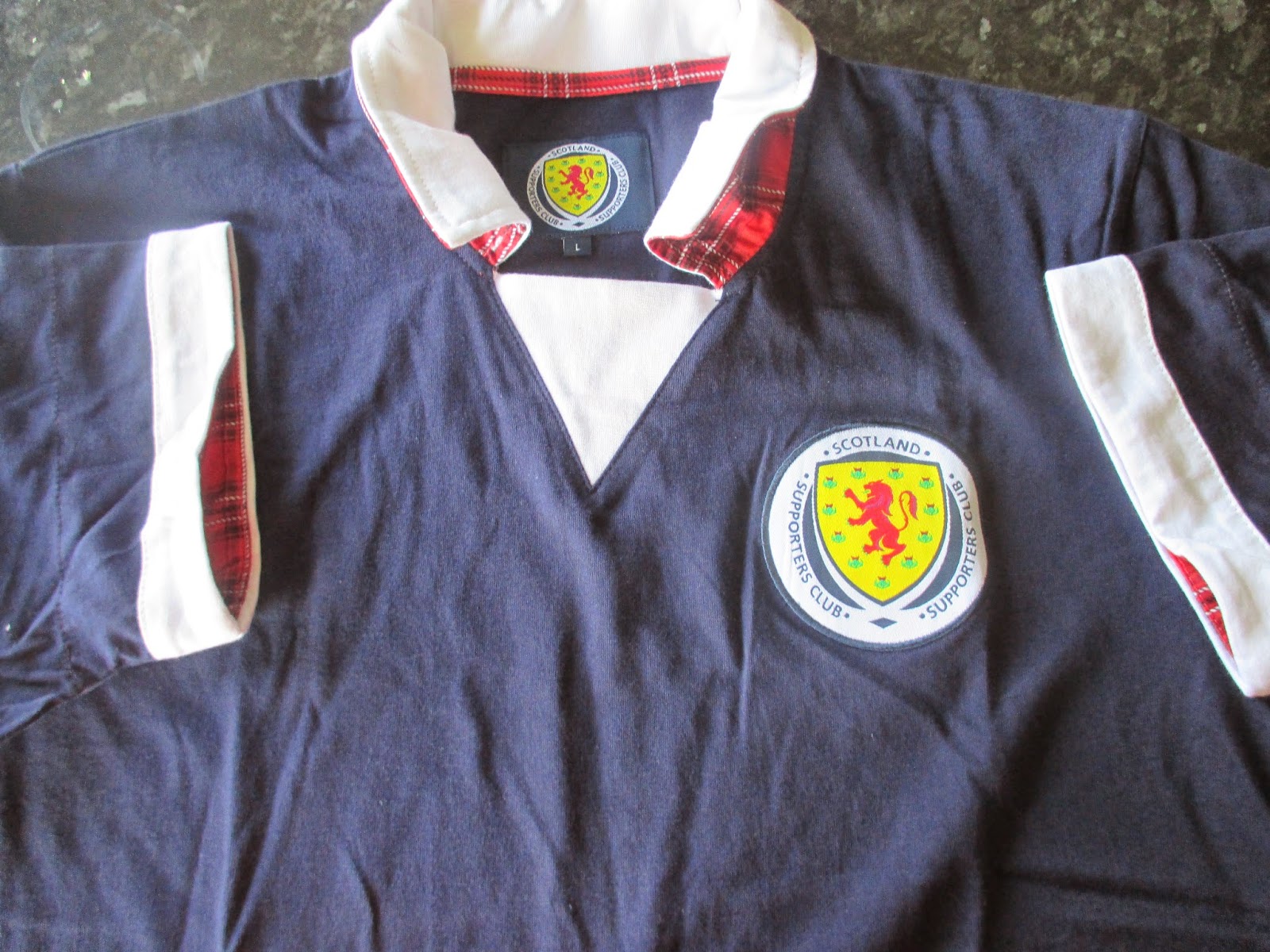 So overall an excellent day, with a cracking ground, a decent game and a good drink and even a gift. My companion for the day gave me his brand new football jersey from the Scotland Supporters Club in recognition of my armchair support to his home nation during five consecutive World Cup campaigns from 1974. I’ll certainly wear the shirt with pride but I think I’ll wait until after this summers tournament.

You did well to catch a game that was on !

Suffers a lot from the raised water table with the lucrative Falkirk Wheel nearby - no financial contribution from the British Waterways Board though !