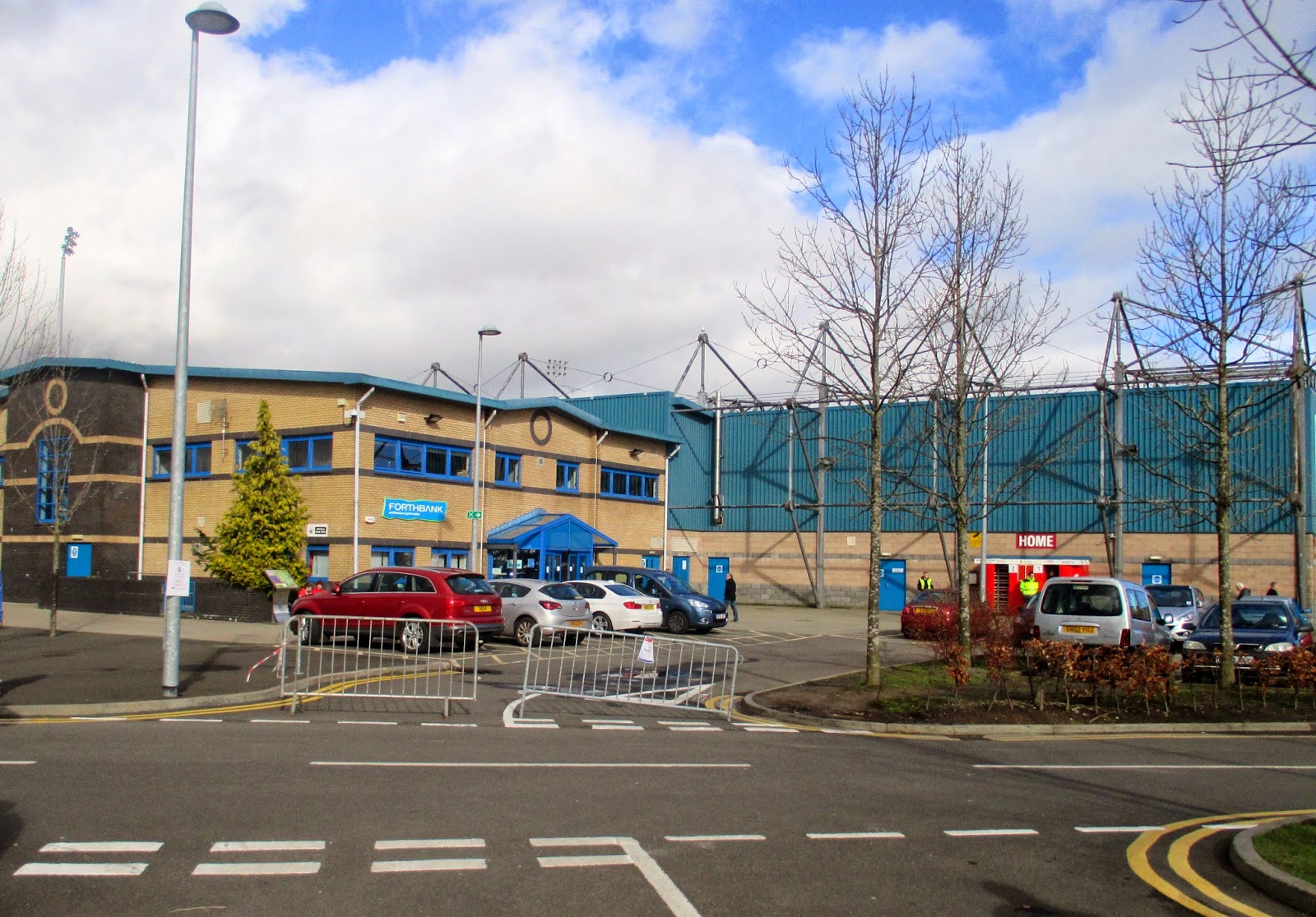 Forthbank Stadium was another ground needed in my pursuit of the Scottish 42 as I begin to run out of destinations which can be achieved in a day. Stirling is the easiest one of the thirteen left on my list, just a straightforward train hop at Edinburgh.

Stirling is the largest city in Central Scotland, known as the "Gateway to the Highlands" due to its geographical position at the Highland Boundary Fault described as the brooch which clasps the Highlands and the Lowlands together. The former Scottish capital was created as a Royal burgh by King David I in 1130, remaining so until 1975, when the county of Stirlingshire was formed. The town was granted city status in 2002 as part of the Queen’s Golden Jubilee.

Stirling is found off the River Forth, so it became a target for Viking invaders. Legend has it that a wolf known as “The beast of Stirling” howled out a warning of a Viking attack, alerting the townsfolk to save the town. It is also claimed that the last wolf in Scotland was killed in Stirling.
At the top of Castle Hill surrounded by three sides of cliffs is the historic and architectural wonder of Stirling Castle, one of the largest castles in the country. Within the grounds is The Great Hall, Renaissance Palace and most of the principal buildings which date from the fifteenth and sixteenth centuries. There have been at least eight sieges of Stirling Castle, mainly during the Wars of Scottish Independence, the last assault came when Bonnie Prince Charlie unsuccessfully tried to take the castle in 1746.Scottish royalty have been crowned at Stirling, including Mary Queen of Scots in the castle in 1542 and King James VI in 1567 in the medieval Church of the Holy Rude. 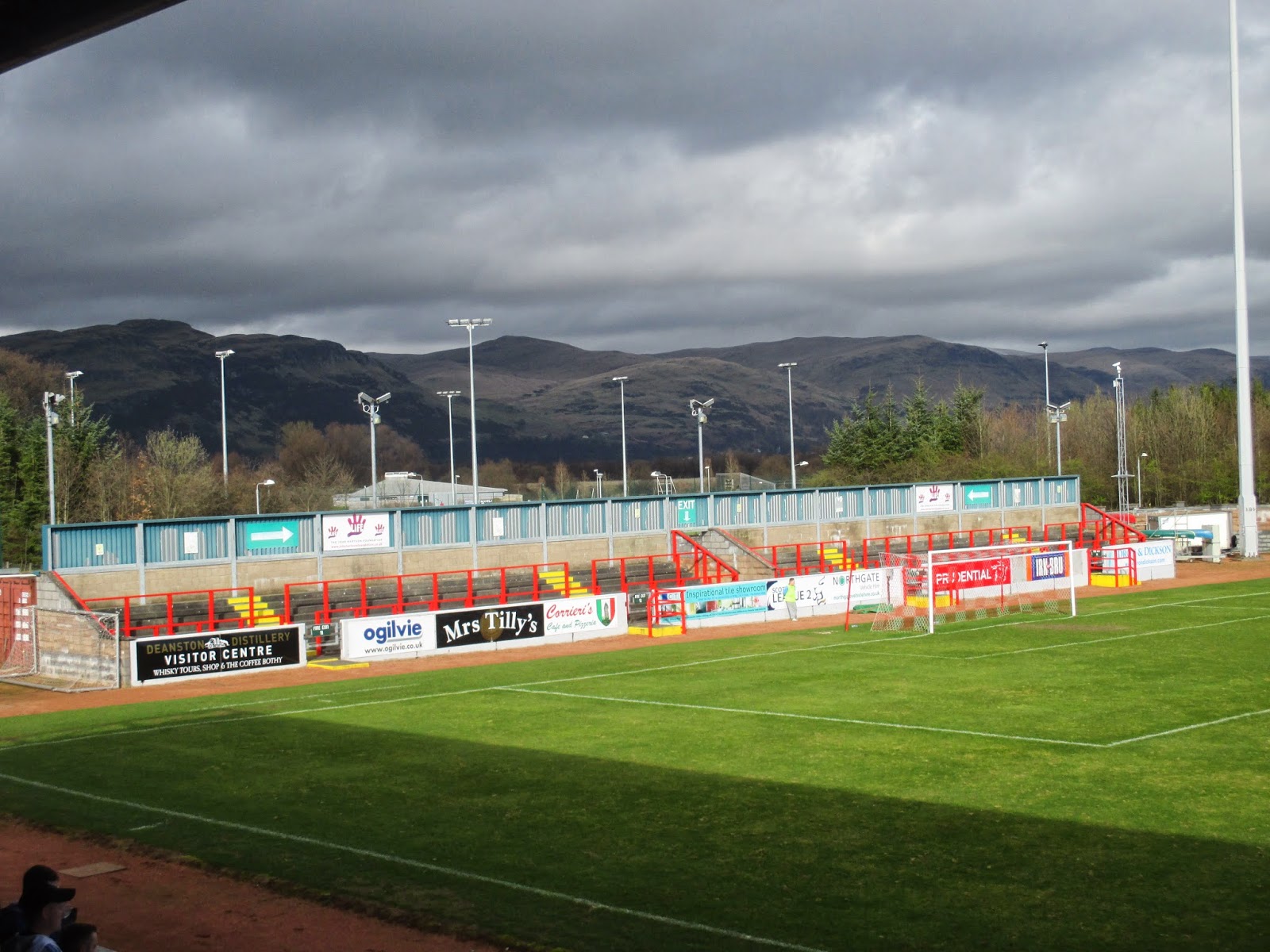 King's Park FC formed in 1875 and later played in the Scottish Football League with the reintroduction of the Second Division in 1921–22 season. Prior to World War II the club had stopped playing competitively but continued playing friendly matches. The fortunes of the club was severely hit in 1941 when a Luftwaffe Heinkel III dropped a single Hermann bomb on their Forthbank ground, one of only two bombs to hit the town during the conflict. Due to a lack of a ground because of the damage, the club didn’t play again and were officially wound up in 1953 when the War Office finally settled their damage claim.

Stirling Albion was founded after the war by local coal magnate Thomas Fergusson, who purchased the Annfield estate to build a new stadium. The football term “yo-yo club” is believed to have originated from Albion, as a club not good enough for the top flight but too strong for the Second Division, having been promoted and relegated eight times between 1952 and '65. The club's unwanted nickname of The Yo-Yos became a Scottish saying that something or somebody was "going up and down like Stirling Albion"  Thankfully the club now have a more solicitous nickname - “The Binos" which is just basically an anagram of Albion but without the Al.

The Binos have won ten league titles between the second to fourth tiers of the Scottish League and hold the record for the biggest victory in the Scottish Cup during the 20th century, beating Selkirk 20-0 in 1984.
In 2002 Albion became the first senior club in the UK to be 100% owned by a fans trust. A group of die-hard fans set up a trust to provide financial support to the club when needed, after concerns over the club's rising debt. The group launched the 'Buy Stirling Albion’ campaign in May 2009 with the Trust leading fundraising efforts and raised enough funds to purchase the club in June 2010. 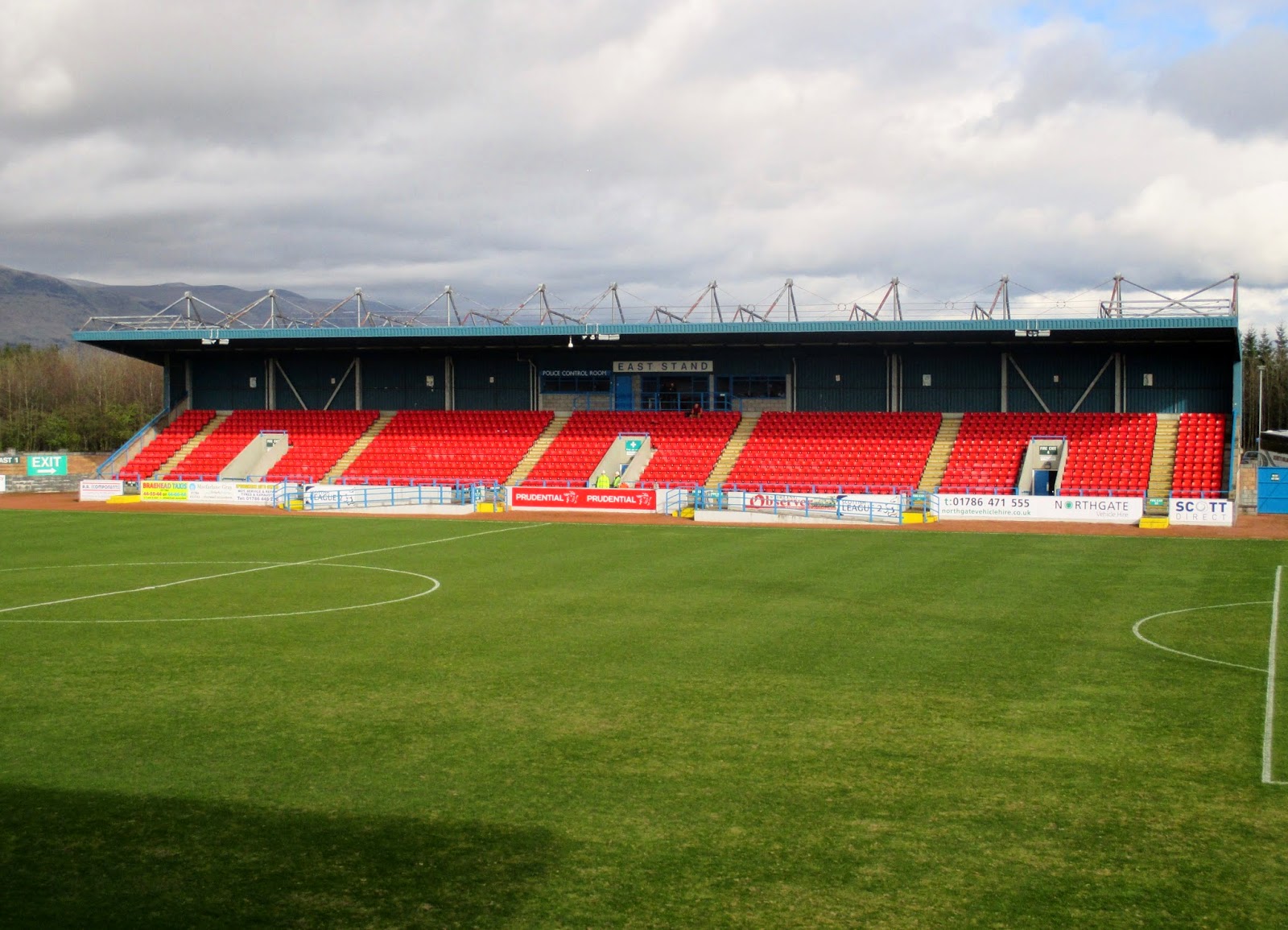 The club moved from Annfield to a new purpose built stadium constructed by Stirling Council in 1993. Forthbank is found on the outskirts of the town and is named after the old home of Kings Park; the first football ground in Stirling.
The 3,808 capacity stadium has two seated stands at the sides and open terraces behind the goals. The main stand is on the west side having a single tier block of red seats with SAFC picked out in white with the club offices, hospitality suites at the back and team dugouts in front. The East Stand is of similar style but smaller in length which brings the overall seating capacity to 2,508. The east side also has a Police Control Room, TV gantry and press box. The terraces are identical with room for 300 at each end with the North Terrace allocated to away supporters, although neither are used unless there's a big game with a decent crowd expected. The ground is completed with four very tall and skinny floodlights, but the best feature is the picturesque backdrop to the north, which includes the Wallace Monument at the summit of Abbey Craig. 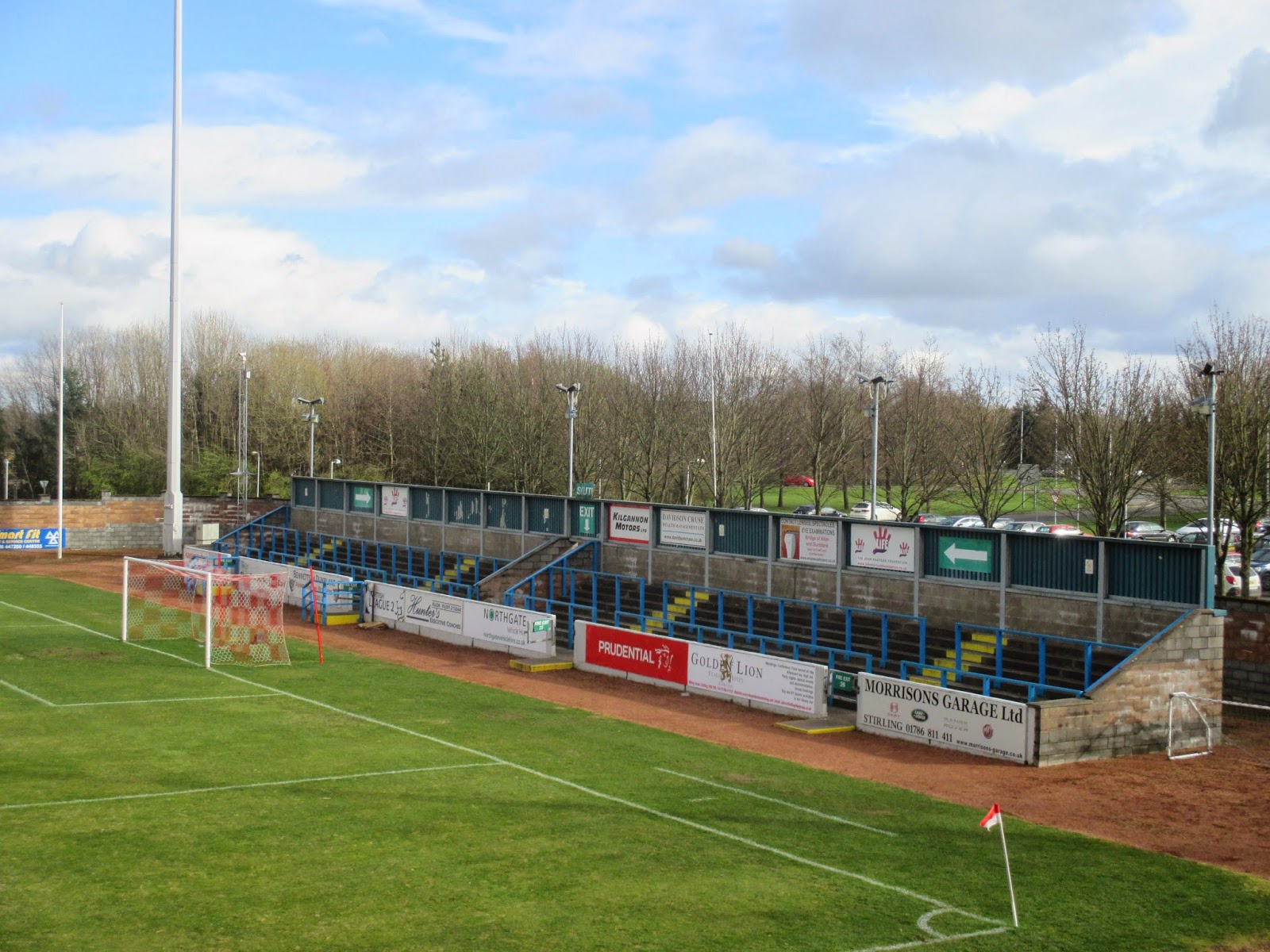 Albion were up against Montrose in League 2, with both sides dishing up the worst opening 45 minutes of play I've seen this season. The match had nowts each written all over it, but to our surprise the second half was quite entertaining. The Binos took the lead five minutes after the restart when Craig Comrie fired home from six yards, but the visitors drew level when a 20 yard free kick from Paul Watson perfectly found the bottom left corner of the net.
Stirling looked to have clinched maximum points when David McClune smacked the ball home off the post on 83 minutes, but a clumsy foul by O'Byrne in the box allowed Gary Wood to fire home the spot kick in the final minute for a share of the points. 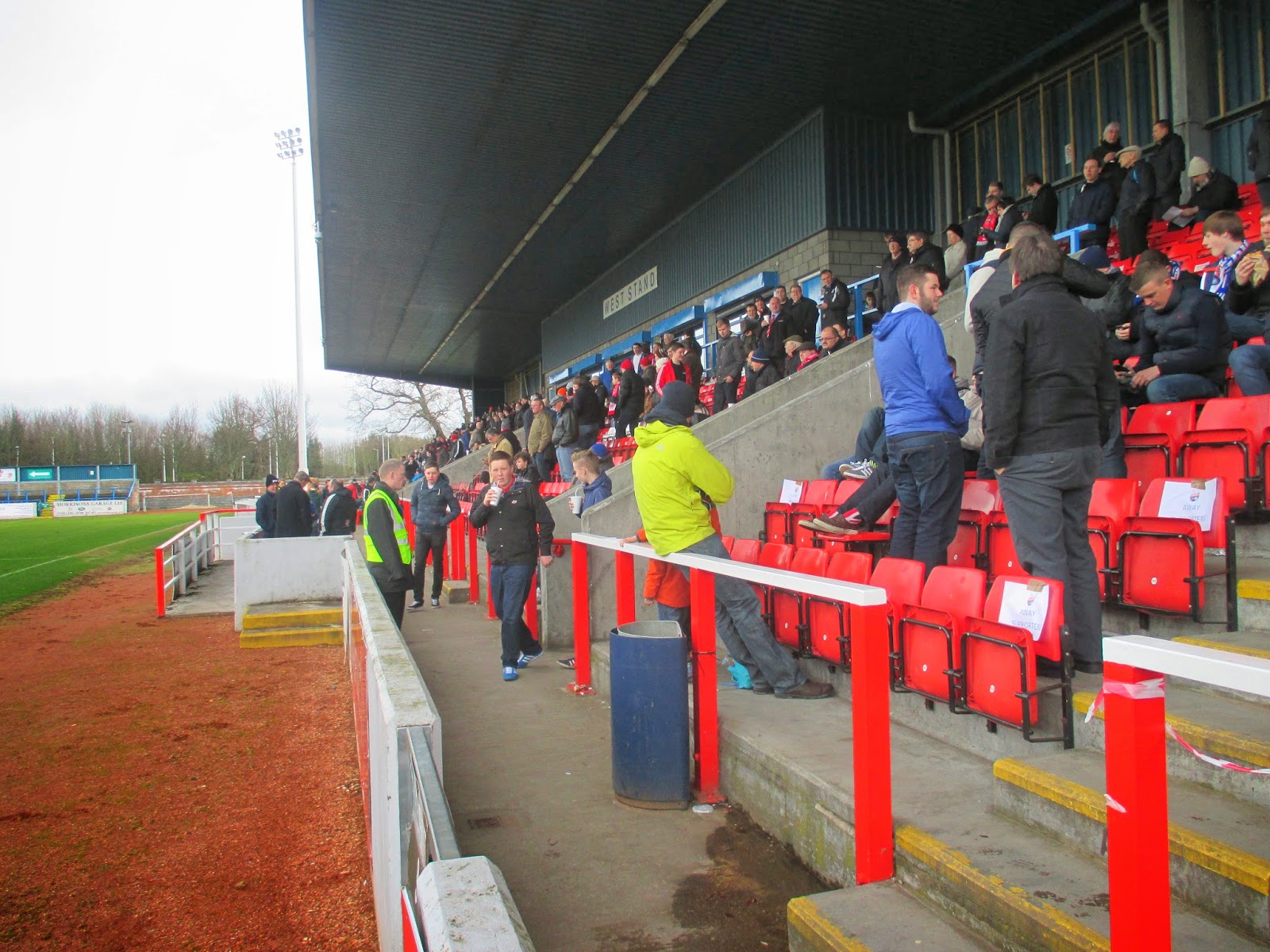 On my arrival in Edinburgh I called at a couple of my regular haunts. Starting off with a walk across South Bridge for breakfast at Babylon Cafe then down to the bottom of the Royal Mile for some vinyl digging at Unknown Pleasures. I then met up with Squad#155 James Little at Waverley for our 50 minute journey on the 1203 Dunblane service to Stirling.
We arrived just before 1pm which allowed plenty of time for drinks at No.2 Baker Street, Portcullis and the auldest pub in Stirling - the Settle Inn. The ground is a good 20-25 minute walk from the station, but we managed to hotfoot it back after the match (with seconds to spare) to catch the 1707 to Edinburgh. Once back in the capital we had time for another bevvy, so James took me to previously uncharted boozer; The Bow Inn which has a large choice of ale and worldwide bottled beers. So that's another of the Scottish 42 successfully ticked off and an enjoyable day out, which was accurately summarized by James when he remarked that "The beer was better than the football!" 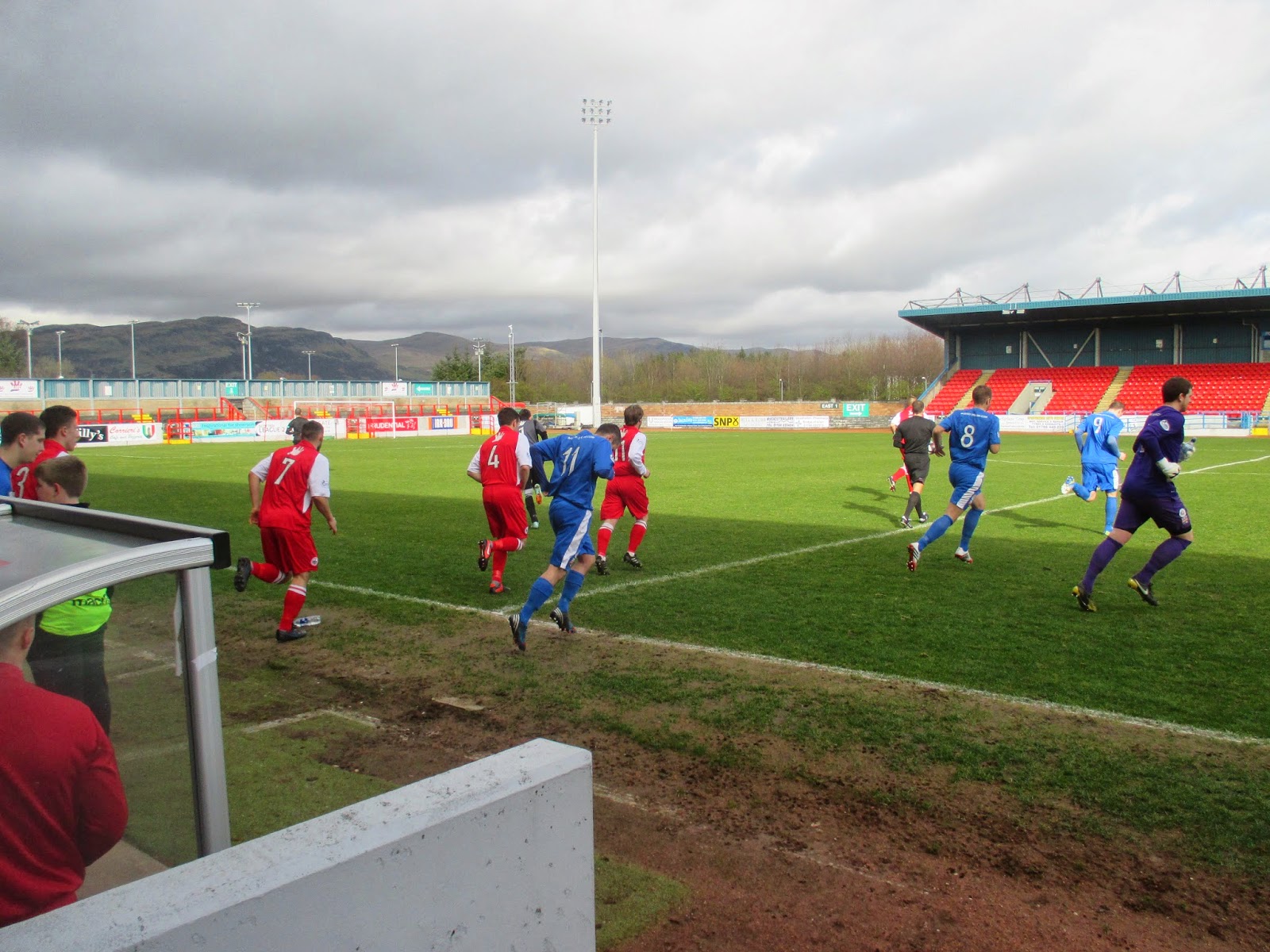 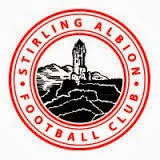