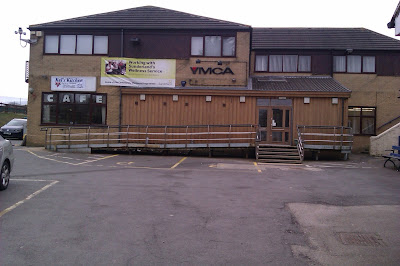 Gateshead FC’s nomadic season has had an effect at all levels of the club, including of course the reserve side. The ressies have used the Hetton Centre in Eppleton to host games, except for one fixture which was listed as - @ Herrington Burn YMCA.  Due to our extended winter that match was postponed last month, but thankfully the rearranged Central League fixture against Grimsby Town was listed at the same venue, so this was an opportunity to add another cheeky digit to my ground list.

As I have no clue of foreign land south of Springwell Village, I did discovered that Herrington Burn is a village in between Washington and Houghton-le-Spring on the X1 bus route, so I travelled down on the double decker from Newcastle on Monday afternoon for the 2pm kick off.

The ground is fully enclosed, with a perimeter fence and dugouts as you would expect from a level 7 ground. The pitch is well maintained on a fine level surface, with a separate changing room facility at the other side of the car park from the YMCA. I tried to find out more information on the ground and past tenants, but as far as I'm aware it hasn't hosted non-league pyramid football. There was a Herrington Burn YMCA football club which played local Sunday football and the facilities are used by local schools (If you know otherwise then please leave a comment)

Gateshead beat a youthful Grimsby Town side on a windswept afternoon, with centre-forward Callum Patton scoring all the goals in a comfortable 4-0 win. The youngster scored direct from a corner kick, followed by a 30 yard screamer and grabbed his hat-trick with only half an hour gone. Midway through the second half he latched on to a through ball from Carr and showed good composure to complete the scoring and claim a victory on the club’s (and my own) one off appearance at Herrington Burn YMCA. 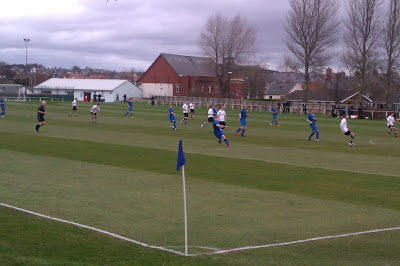