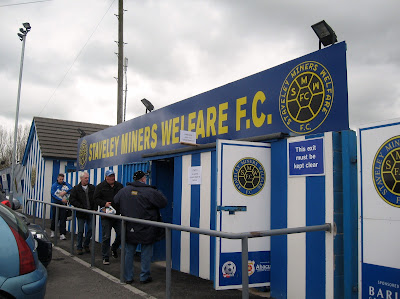 My personal long wait for a visit to the new Wembley Stadium came down to just 90 minutes, as Staveley Miners Welfare stood in the way of Dunston reaching their first FA Vase final, with the added attraction of a potential all Northern League final against West Auckland.
Last Saturday a tense first leg encounter saw Dunston gain a narrow one goal advantage courtesy of an Andrew Bulford strike in the 78th minute which gave the Geordies a “half-time lead” which leaves this second leg tie finally poised.Meanwhile in the other semi-final it was all square as West Auckland came away from Kent with a 2-2 draw at Herne Bay, meaning the outcome of the 2012 final was wide open for all four clubs.

I was amongst the travelling supporters hoping to see the Gateshead based club maintain Tyneside’s grip on the Vase after Whitley Bay’s hat-trick of wins in the competition since 2009.Two coach loads of tanked up Dunston fans (as well as the Sky Sports Jose Enrique lookalike cameraman) departed from the shadows of the UTS Stadium at 1030am arriving in Staveley at around 1.30pm
Staveley is a parish in Derbyshire, five miles east of Chesterfield, situated near the banks of the river Rother and the Chesterfield canal. The former mining town had several large mining pits situated in and around the area, most notably the Ireland Pit, which has long since closed down along with the others in and around the area. 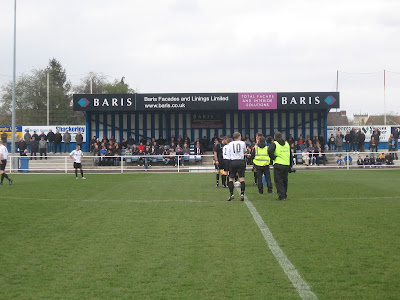 The club began as a Sunday league team; the Nags Head formed in 1962 playing matches at nearby Barrow Hill. In 1965 they started playing at a competitive level in the Mansfield League, until joining the Chesterfield League three years later.
Saturday football arrived in 1989 in the Chesterfield and District Amateur League, then two years later they moved up to the Sheffield and Hallamshire County Senior League, winning two divisional league titles in their first two campaigns.
The Welfare joined the Non-League pyramid in 1993 in the Supreme Division of the Central Midlands League. After finishing third in 1996–97 they were accepted into Division One of the Northern Counties East League. After a second place finish in their debut season they won promotion to the NCEL Premier Division. The club were relegated back to Division One in 2000–01 but returned to the Premier Division this season coming up as champions. 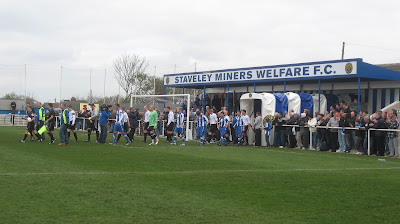 Inkersall Road was originally a Welfare Ground having a standard pavilion and fully enclosed pitch. The original pavilion was burnt down and replaced with new changing rooms, boardroom and tea bar by transferring an old school building from the town.
If you weren’t already aware of the fact, on arriving you would surmise that the Welfare wear a blue and white vertical kit. The main entrance is decked out with a candy wrapper design along the turnstile and clubhouse wall and once inside the theme continues which gives an overall fetching look to Inkersall Road.The ground has a capacity of 5,000 with a 200 blue seated stand. The stand is a basic structure which sits central, parallel with the half way line.
Recent ground improvements have been made in preparation not just for this big semi-final clash, but for the pending visit from the ground grading committee this week, to allow a step up to the Evo-Stick League this season should the team finish in the promotion spots.
Four new terracing areas have been laid on all four sides with a tarmac walkway. There is cover behind each goal at the far side the roof is set back parallel with the goal, while at the nearside the enclosure is in between the turnstile block and the Bar 15 Café clubhouse, which has an electric scoreboard perched on its roof.
At the dugout side is a marquee set up for VIP visitors and the best feature of the ground is the Tower Bar, which is a tea bar with a TV gantry above. There are also plans afoot for a new stand to be built on this side sometime in the near future. 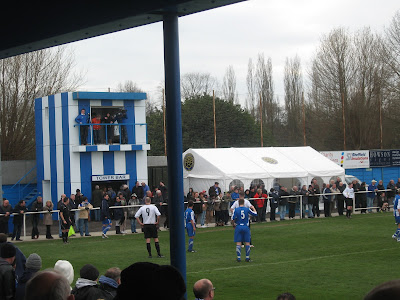 The ground is just off the town centre which meant there were boozers handy for the already alcohol fuelled up Dunston fans. I wanted to go for a sup in The Speedwell, but after asking a slightly put out gentleman for directions and asking again in the local chippy I decided to give it a miss as it seemed a bit of a hike. Instead I had a pint in the Elm Tree before meeting the rest of the lads in the Staveley Miners Welfare, which once upon a time doubled as changing room facilities for the original football club.
Prior to kick off there was a good atmosphere in the ground, with a crowd of just over a thousand anticipated a much better game than the previous week and both sets of fans confident that it would be their team playing under the Wembley arch in May.

Staveley needed an early goal to get back into the tie and after a positive start they grabbed the lead in the 7th minute with a fine strike from Simon Barrowclough, his effort finding the top right hand corner of the net giving Connell no chance.
Dunston hit back, and in the space of ten minutes regained their foothold on the tie with Andrew Bulford’s 40th goal of the season. A left sided free kick found Dixon with plenty of time and space to pick out Bully to poke the ball home. The goal was greeted with mass delirium from the travelling contingent and in all the excitement Bullford was handed a yellow card for his part in the goal celebration.This moment of foolishness proved a pivotal point in the game as a second yellow card for a late tackle in the 32nd minute, meant Dunston had to play the remaining hour of the game without their star man.
Staveley took only five minutes to capitalise on the extra man advantage, as a neat break saw Fox set up Chris Coy to stab the ball home and give the hosts a 2-1 half time lead and make the tie all square.

At half time I went into the club house and felt totally dispirited. The home fans were buoyant and I overheard them discussing Wembley plans, which was fair enough, as I too felt it was Staveley MW who could look forward to a day in that there London in 6 weeks’ time.
Dunston boss Billy Irwin made a couple of tactical half time substitutions to compensate for the one player disadvantage and in the second half Dunston were the better side, pressing for that crucial winner but I personally couldn’t see it coming, as I still hadn’t snapped out of my pessimistic mindset for half time.
Then in the 72nd minute I broke out of this cynical mood after another moment of madness, this time Barrowclough received a straight red after landing his elbow into Kane Young’s face, which meant it was ten-a-side and game on!
From this point there was only going to be one winner, UTS had their tales up and a spell of Dunston pressure came to a crescendo in the 84th minute. Substitute Stephen Goddard received a left wing cross, finding himself with tons of room and an eternity to shoot, it was one of those moments when time appeared to stand still, it was a golden chance and you knew he couldn’t miss, but it seemed to take minutes rather than seconds for him to finally shoot the ball high into the net to make the Wembley dream come true. 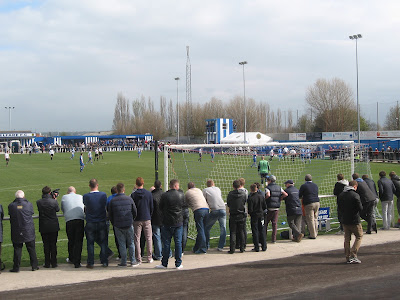 The final whistle was greeting with mass celebrations on the pitch by both fans and players alike. Although I’m not a dye in the wool Dunston fan, I am a supporter, and delighted as I am with this victory and a pending day out at Wembley with the lads from NE11, I feel more chuffed for the likes of my Fed fan mate Lee Robbo and Squad#182 Davy O’Neil who was emotionally wrecked and in floods of tears after the game. I’m also pleased for Davy’s breadknife and stadium tea lady Beth, the lads who I’ve travelled with and stood behind the goal with at home games and most of all the staff and club officials, whose hard work and dedication behind the scenes has been rewarded with a big day and a nice pay cheque from the FA in reaching Wembley.

When I got home on Saturday night I immediately booked trains for me and the bairn to Kings Cross on 13th May for the FA Vase final against West Auckland Town, who made it an all Northern League final (The FA will be pissed off about that…Eddy) after overcoming Herne Bay 2-1 at Darlington Road. I’m excited and looking forward to the big day and I hope the rest of Gateshead and Tyneside as a whole make the trip south to support such a great club, plus its not very often that a team from our part of the world gets to play in the home of English football, you never know, you might not getting another chance. 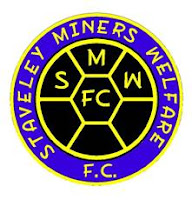 No mention of the Dunston hooligans throwing bottles and attacking innocent people.

I don't want to come across all Arsene Wenger and that but I honestly didn't see it,I was stood at the back of the covered section behind the goal.
I did hear about what happened afterwards, but I don't want to report on the Dunston version of events incase they aren't 100% accurate and it appears I'm giving an unbalanced view on events.
The incident has been reported on other blogs by writers who witnessed what happened and I've linked there articles at the foot of my posts.
However I do know that there were Dunston followers who had been on the lash since 10am who were disorderly and on there behalf I apologise.