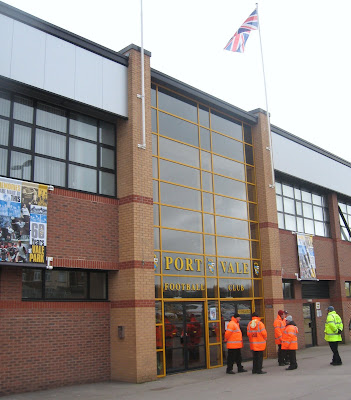 Vale Park is a ground that should have been ticked off years ago. Newcastle visited the potteries in two consecutive seasons at the start of the 1990’s, but for one reason or another, I twice missed out seeing United win 1-0.
The explanation being… well, I honestly don’t know, because even back then without fail, I would jump at the chance to watch United at an uncharted ground. Looking back I have a vague idea why I wasn’t available circa 1990-92, but I’ll keep my ink dry on that for the time being until my autobiography is published.

Port Vale are one of a few clubs not to be named after a city or town, playing in Burslem, one of the six towns which forms the city of Stoke-on-Trent.
The Staffordshire town has the proud title of the "mother of the potteries." In the early 17th century Burslem was at the forefront of the production of the best classes of pottery made in this country. The town was the birthplace of the greatest exponent of the potters' art - Josiah Wedgwood, who was born in Burslem in July 1730.
The club name is believed to derive from Port Vale House where the club were formed and various landmarks called Port Vale around the Longford area of the Potteries. 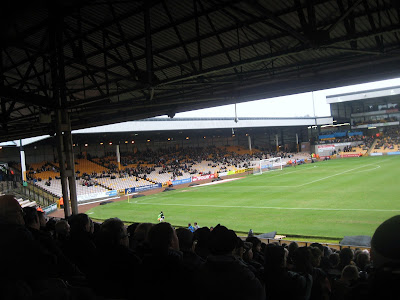 Vale played on various grounds after their formation in 1876, including a site close to Burslem Station on Moorland Park, when they were known as Burslem Port Vale, becoming a professional outfit in 1885.
The following year they moved to Corbridge Athletics Ground, where Vale joined the Football League, only to resign, before rejoining two years later before completely going out of business in 1907.
A church team took over the ground and the Port Vale name before moving to the Old Recreation Ground in the centre of Hanley in 1913, where they settled for just over 30 years until plans to relocate in 1944 on the site of a former clay pit on Hamil Road.
The new super stadium was to be the Wembley of the North an ambitious 70,000 capacity ground built on 14 acres of land. The ground took six years to build at a cost of £50,000, a lack of funds meant only two stands were originally build with two sides of open terracing, giving a reduced capacity of 40,000.
The first match took place on 24th August 1950, a crowd of 30,042 witnessed a 1-0 victory over Newport County.
The ground developed over the next decade, a new playing surface the most expensive ever laid at the time cured the troublesome drainage system. The seating capacity was raised and floodlights erected at a cost of £17,000, switched on before a 5-3 victory over West Brom on 24th September 1958.
The capacity increased to 50,000 by 1959 as Vale Park reached its peak with a record attendance of 49,768 for an FA Cup Round tie against Aston Villa on the 20th February 1960. 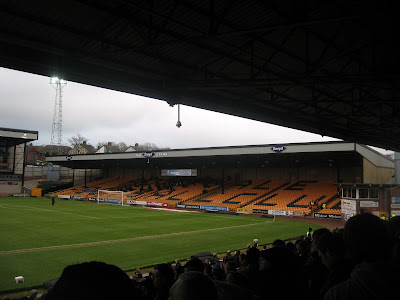 The Railway Stand was originally a large open terrace when the ground opened in 1950, with 600 seats installed the following year. The stand was rebuilt in 1954 at a cost of £25,000 split between 4,500 seats with a standing paddock at the front.
The stand is now all seated, the two tiers split by a brick wall. The top tier has white seats and is reached by a long steep path with turnstile access at the back of the stand, the bottom tier has a separate entrance next to the car park.
The Bycars Road End was the other original stand, built with only 350 seats at the rear. In 1959 new terracing increased the capacity to 6,500, the traditional 'home' end stood until 1989 when declared unsafe following the Taylor report.
The present stand was built in 1992 and is a bank of seats decked out in amber with black lettering.
In between in the corner section is the Family Stand, which was fenced off and unused from 1973 until 1989. The stand has two tiers, the top blue seated section is used while the bottom section looks closed.
When built, the Hamil Road End was a vast open terrace and highest part of the ground before the top point was levelled off in 1978. An electronic scoreboard costing £20,000 was installed in 1988 and cover finally added in 1992. The stand was fully seated in 1995 and is currently known as The Sneyd Stand for away spectators.
Lorne Street Stand originally consisted of two separate terraces either side of the players tunnel with the unique feature of the Directors Box perched on top.
The new Lorne Street Stand still isn’t finished after work initially started in 1998. Building work on the £3m stand came to a halt due to lack of funds with one half of the terrace still to be filled with seats. There’s two rows of executive boxes with the directors seats central. The stand also contains sponsors lounges, club offices, dressing rooms and the club shop. One corner has a disabled stand next to the Hamil End opened in 1989, believed to be the first of its kind in the League. The current overall capacity is just short of 19,000.
Port Vale maintained their position in the play off places after making hard work of what should have been a convincing victory over struggling Macclesfield.
Vale took the lead when a Kris Taylor corner missed everyone and fell nicely to Lee Collins with a diving header at the back post.
The home side were twice denied by the woodwork, Taylor hitting the post with a free-kick and Adam Yates saw a close-range shot rattle the crossbar.
Louis Dodds curled in a wonderful shot from 20 yards to seal it three minutes from time before Tyrone Barnett pulled one back in injury time, which was too little too late for Macc. 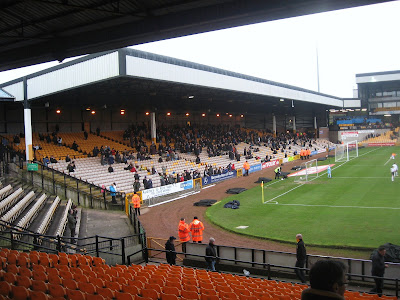 My recent trips haven’t gone according to plan, it’s getting to the point where I’m getting really sick of rushing to catch trains. Even a fixture at York City last Tuesday night, saw yours truly so rat arsed that I got myself lost, meaning I had to run like Seb Coe in his prime, catching the train with only seconds to spare.
So for my latest venture to Port Vale I allowed myself plenty of time. I departed Newcastle on the 0733 Cross Country service to Manchester, where I met up with my old indie pal Pete - the Too-Too driver from Crewe. We did a mini Wetherspoons tour of Manc before I caught the 1315 Virgin Train to Stoke-on-Trent.
Once I arrived in the Potteries it was a case of simply catching the 21 bus, just around the corner from the station, which according to FGG takes around 15 minutes. But as my travel luck would have it, my bus journey took nigh on three quarters of an hour, crawling through the lowlights and low points of which must be the scruffiest city within our green and pleasant land. I alighted the bus just as the players were lined up awaiting the referee’s whistle to kick off the League Two fixture, so yet again, I had to run like buggery to the ground only missing the first two minutes of the action.
There was no problems returning, the 21 bus seemed to be waiting for me after I took some photos and visited the club shop after the match.
I was back in the city which has so much to answer for at 6.30pm, which gave a good hour to return to The Manchester & County on Piccadilly to use up the remainder of my Wetherspoons vouchers before my 1942 rattler back to the Toon.
A good day out was spoilt with football news from elsewhere. Newcastle lost at home which wasn’t a surprise as we haven’t won a 3pm game in the Prem at SJP since August 2008. The Heed only drew at Alty, but my biggest disappointment was Dunston going out of the Vase, so my dream of a Wembley double is now diminished.
On the whole a pleasant day, good to see Peter the Engine again and finally ticking off Vale Park (be it 20 years late) which has been redeveloped into a smashing little stadium.