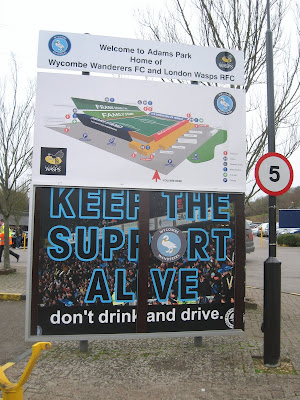 After taking a break from train travel for a few months, it was time to hit the tracks again with a trip to Whickham, but not the one situated 5 mile due west of the 100FgC HQ, the other which is spelt with a ‘Y’ and another 280 miles south in Buckinghamshire.
High Wycombe is a large market town set in the heart of the Chilterns, well known for furniture making and design. The name Wycombe comes from the River Wye and the old English word for a wooded valley - combe. The valley’s line of beech trees were felled and used to make furniture, the town once renowned as ‘the furniture capital of England’.

It is believed that Wycombe Wanderers were formed in 1887, although there’s been much debate about the club’s origins, with matches played in the town from 1884.
Wycombe joined the Southern League in 1896, but the majority of their non-league days were spent in the Isthmian League from 1921, winning the league title twice in the 1950’s and four times during the ‘70’s.
The club were again champions in 1982-83, then two years later won promotion to the Alliance. Although they were relegated in their first season, an eighth and final Isthmian League title the following season saw Conference status achieved.
In 1991 Wanderers enjoyed their first success at Wembley since winning the FA Amateur Cup in 1931, beating Kidderminster Harriers in the FA Trophy final.
The club narrowly missed out on promotion to the Football League to Colchester United on goal difference in 1991-92, but the following year they went one better, winning the title and a second FA Trophy success, with a 4-1 win over Runcorn. 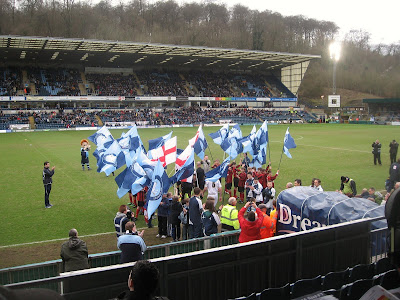 Adams Park was built in 1990 at a cost of £3.5m following the sale of the club’s former ground at Loakes Park, their home since 1895.
The stadium was named in honour of benefactor and former captain Frank Adams, who purchased the freehold of the former ground and donated it to the club. Loakes Park was sold to the health authorities to facilitate the expansion of Wycombe General Hospital, the sale financing the move to the new stadium.
Situated west of the town centre on the edge of the Sands Industrial Estate, the stadium originally had a capacity of 6,000 with 1,267 seats in the Main Stand.
The Main Stand has a raised single tier with access to the seats from staircases via a gangway at the front, which is also used as a standing paddock accommodating 232 standing spaces for fans who have already purchased seat tickets.
The stand also accommodates the club offices, Vere Suite, press area, with the players tunnel situated left of the dugouts. 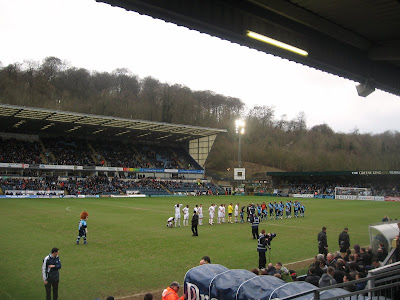 In the summer of 1996 the 4,990-seater Frank Adams Stand was built. The roof was removed from the old Woodlands Terrace, with the extra tier built on the hill behind.
The stand is quite impressive, the two tiers split by 20 executive boxes with the seats decked out in the two blues with WWFC and the swan crest on the top tier.
Access to the stand is from behind the west and east stands, then up a long flight of stairs which leads onto the back of the hill. The stand also houses the TV gantry, has disabled space for 50 wheelchair spaces and further hospitality in the Woodlands Suite.
Away supporters are giving the Dream Stand behind the east goal. Originally a standing terrace it was reduced in capacity from well over 2,000 standing spaces to 1,049 seats when built in 1996. In the summer of 2001 the end was extended by an extra 977 to take the capacity to 2,026, decked out in dark blue seats.
The only remaining terrace is behind the east goal. The Greene King Terrace has a capacity of just under 2,000 which is fully covered.
The ground has scoreboards and clocks in three of the corners, including a video screen in the north-east corner, so overall the ground has a nice appeal with its valley setting and surrounding woodlands.

In 2002, rugby union side London Wasps became joint tenants after a similar ground sharing agreement at Loftus Road came to an end. The following year the stadium was renamed The Causeway Stadium in a £100,000 sponsorship deal, which didn’t go down to well with the fans, however the sponsorship expired at the end of the 2005–06 season and the ground name has reverted back to Adams Park.
The capacity of the stadium was fixed at 10,000 to comply with council regulations, as the positioning of the stadium on a dead-end road was leading to problems when large crowds left the ground, particularly with parking cars in the streets of the nearby residents. The crowd reached fully capacity on the 13th July 2005, when Premier League champions Chelsea played Wycombe in a pre-season friendly. 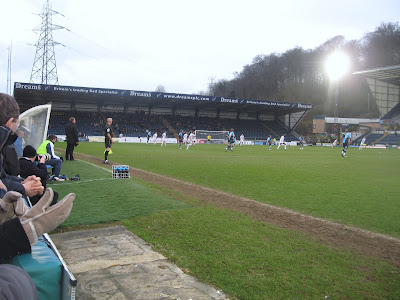 Wycombe went into this League Two fixture with Port Vale looking to make it six straight home league wins in a row, but the Chairboys can count themselves lucky as Wanderers ‘keeper Nikki Bull saved Tom Pope's late penalty to deny Vale victory.
The game opened with enterprising play from both sides, created good openings with Vale closest to taking the lead in the early stages. However the match fell a bit flat as the half progressed as both teams failed to get a stranglehold on the game.
Two minutes after the restart the visitors took the lead, a good interchange of passing from Vale ended with a dangerous Kris Taylor cross which was sliced into his own net by Leon Johnson.
Scott Donnelly, on loan from Swansea, equalised with his first goal for Wycombe on 57 minutes, when he burst through the middle and fired low past Chris Martin from just inside the box.
Both sides pushed for a winner and it was Vale that had a golden chance to win the match when Johnson handled Doug Loft's cross on 82 minutes, but Pope's spot-kick was blasted down the middle as Bull pulled off a terrific save to earn his side a draw. An email from East Coast trains just before Christmas meant I could book some £8 single fares to Kings Cross. From here it was a simple five stop tube ride, followed by a 35 minute train from London Marylebone to High Wycombe.
So after leaving Newcastle on the 0730, I was confident that I’d arrive in the other Wycombe just before noon, but yet again my strategic plans went tits up!
I arrived at Marylebone with the news that the train line to Harlow-on-the-Hill was suspended and told to go back to Baker Street and take the Metropolitan Line to Amersham. Those of you who are unaware where Amersham is, it’s in the top left hand corner of the tube map, so far north it’s hanging on for dear life and nearly falling off the edge of the page.
I finally arrived in this far flung corner of that there London to be then told those three little words that any train traveller fears as much as anything else; “Replacement bus service”
Not really knowing my exact location and how far away from High Wycombe I actually was, it was a relieve to discover I was only 6 miles away, the bus journey taking only a quarter of an hour so I finally arrived in the furniture town just before 1pm, however this meant the pub crawl I plotted and the record stores I wanted to browse was limited to just the two JDW pubs and one vinyl shop in the town.
The journey to the ground is a canny hike, a good 45 minute walk, so I set off in good time as I was on press duty and didn’t want to arrive too late, finally arriving at Adams Park at 2.30pm
The talk throughout the match in the press area and amongst the Wycombe players not on playing duty sitting near to us was what was happening at St James Park. When Arsenal went 3-0 up after only 10 minutes I told my colleague next to me to be quite and to stop telling me the score, he then profusely apologised, but felt confident enough to update me in the second half as the Toon fought back from four down at half time to snatch a 4-4 draw. This coupled with Gateshead reaching the quarter-finals of the FA Trophy after beating Dartford 3-0, meant it was a very happy Shaunee Boy who rapidly ran all the way back to the train station to catch the 1730 BRS to Amersham.
The reverse journey back to Kings Cross went ok, I even had time for a drink at the Lincoln Lounge before boarding the 2000 back to Newcastle, finally crossing the threshold of 100FgC HQ just after midnight.
So another long and exhausting day out, but in the end well worth it, Wycombe Wanderers’ Adams Park ticked off and another off the 92, where I’m now beginning to see a bit of light at the end of a lon