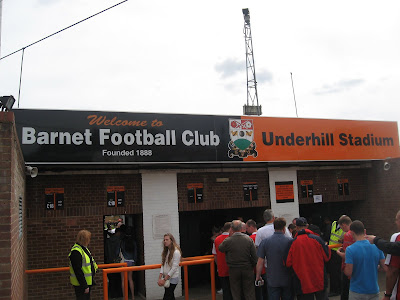 My first trip of the new football season was a family rail day out down to that London. As you would expect we did a bit of sight seeing and went for a drink in Wetherspoons and of course I did my usual disappearing act while the family were shopping so I could attend a game and tick off another new ground, the preferred destination being Underhill - the home of Barnet FC.

The London Borough of Barnet is a suburban area in North London built around a twelfth-century settlement.
The town was the site of the Battle of Barnet in 1471 where King Edward IV and his Yorkist troops killed the rebellious Warwick the Kingmaker and his brother the Marquess of Montagu.
The hill mentioned in the nursery rhyme “The Grand Old Duke of York” in which 10,000 men marched up and back down again refers to Barnet Hill where the conflict took place. 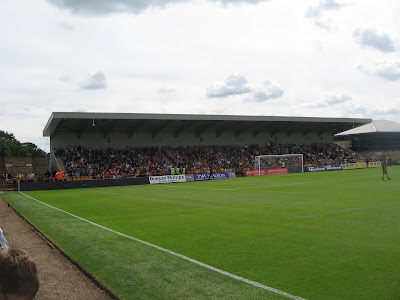 The original Barnet FC formed in 1888, having previously been known as New Barnet FC and later Woodville FC playing on a ground on Queens Road. The club had reasonable success playing in various leagues in North London until folding in 1901.
The current club originates from two local clubs; Barnet Avenue FC (formed 1890) who renamed themselves Barnet FC in 1904 and a dental company Alston Works AFC (formed 1901) both clubs merged in 1912 as Barnet and Alston FC.
The club played at Amateur level as founder members of the Athenian League for over 50 years until turning semi-professional in 1965, renamed as Barnet FC after the First World War.
.
The Bees played their early Non-League days in the Southern League then became founder members of the Alliance in 1979. The club missed out on promotion to the Football League after finishing runners-up on three separate occasions until finally winning the title in 1990-91.
Underhill staged League football for ten years including a season in Division Two(League One) in 1993-94. After relegation to the Conference in 2001 they regained their place in League Two, crowned champions in 2004-05, 12 points ahead of Hereford United.
.
Underhill opened in September 1907 with Crystal Palace providing the opposition, the Alston Works side winning 1-0. Barnet won the FA Amateur Cup in 1946 and finalists in 1948 and 1959, it was in this competition that witnessed the ground’s biggest gate - 11,062 for a 4th round tie with Wycombe Wanderers in February 1952.
The first stand was built in 1926, however it wasn’t until the 1960’s that the ground was developed which included floodlights installed in 1962 and the building of the Main Stand two years later. 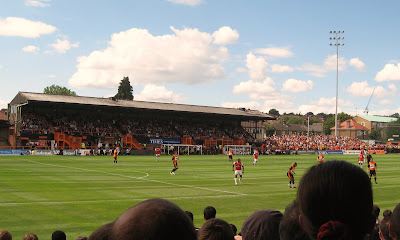 The Main Stand sits on the half way line having 800 blue seats, with access gained at the front via the brightly painted orange staircases. The Family Stand sits next to it with the open North West Terrace at the other side.
The covered East Terrace runs pitch length and is shared with away supporters. The stand has both a peaked roof which houses the TV gantry and flat roof towards the south side.
The shallow North Terrace includes a separate seated stand on the east side of the terrace. The residents on Westcombe Drive get a free view of the game but some have now been scuppered with a large board on the back fence with Come on u Bees!! in big capital letters.
The new 1, 061 South Stand was opened in January 2008 replacing the temporary uncovered 700 seats, which in turn had replaced the old West Bank. The stand has a single tier of seats in the club colours, with the new club offices; the Durham Suite in the south-west corner.
Underhill has distinctive floodlights, resembling four large TV aerials but the ground is well known for the slope which run pitch length from the south up to the north end.
The ground is also used by Arsenal Reserves, the clubs pre-season fixture is now as much a part of the start of the football calendar as the Community Shield.
The capacity crowd delayed the kick-off by 10 minutes, so quite a few Gooners would have missed Andrey Arshavin give Arsenal a 90 second lead. The Russian played a clever one-two with Rosicky before taking the ball around the keeper and scoring from close range.
A brace from Jay Simpson before half time, finishing off two typical Arsenal moves made it 3-0 at the break before a fresh side took the field for the second half.
The second half team didn’t fair as well as their predecessors, only adding one goal to the score (maybe because they were kicking up hill…Eddy) when Samir Nasri seized on a defensive howler to grab the fourth on 75 minutes.
Barnet battled throughout, fielding basically a brand new team with only half a dozen players remaining from last season. The Bees new boss Mark Stimson has assembled a new squad and with the likes of Watford, Charlton, Southampton and Peterborough to come to Underhill this pre-season, the new gaffer has time to mould this new side before their League Two campaign kicks off. 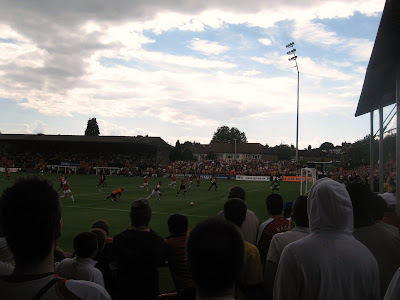 As much as I enjoyed my first new ground of the season, I wish I had chose a different fixture to visit Underhill. The match was like an Arsenal home game so I felt like I having really experienced a Barnet home match. Matters weren’t helped by some of the songs chanted from the Gooners, which were basically crap, both lyrically and melodically.
I’ve learned that if the chance arises to visit an uncharted ground then I have take the opportunity, in the likelihood that another chance may not occur. I shouldn’t really complain though, as the game was quite entertaining, with some good football played in glorious sunshine, a nice introduction to the 2010-11 season. 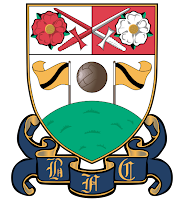