My Back Pages - 91 Giuseppe Meazza Stadium 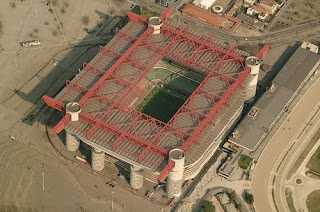 The euphoria and overall feel good factor amongst the Toon Army after easily winning the second division turned to a desolate mood, when the club issued a statement one week after the final game of the season.
The statement detailed that Chris Hughton will have no money to spent this summer, any influx of players will be financed by raising funds by selling, making use of the loan system and developing younger players through the club‘s Academy.
Lee Ryder from the Evening Chronicle wrote a interesting piece on the subject titled ‘Newcastle may not be a Pompey but the San Siro seems a million miles away now’ highlighting where it’s all gone wrong since that night in northern Italy in March 2003.
So for the latest in the My Back Pages series I thought I would travel a million miles away to the San Siro when United faced Inter in the second phase of the UEFA Champions League. 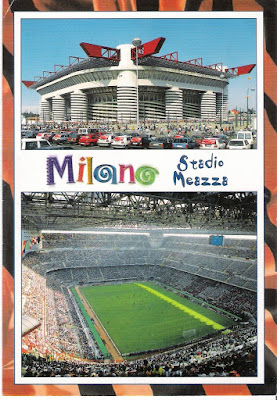 San Siro is the district in the western part of Milan where the "Nuovo Stadio Calcistico San Siro" was constructed in 1925, renamed the Stadio Giuseppe Meazza" in 1980 in honour of the legendary Italian striker who was born in the city and served both Milan clubs.
The first match took place on 19th September 1926, a crowd of 35,000 saw Internazionale defeat home side AC Milan 6-3, it wasn’t until 1947 that Inter became joint tenants, both sharing the stadium ever since.
In 1955 the capacity reached six figures with completion of two further tiers, the international between Italy and Brazil the following April drew a crowd of 100,000 who witnessed a 3-0 win for the Italians.
After the Heysel Stadium disaster in 1985 the stadium’s capacity was reduced to 80,000, before undergoing further redevelopment for Italia ’90 with $60 million spent on bringing the stadium to UEFA 5-star standard.
The revamp included the stadium becoming all seated with an 85,700 capacity with extra tiers added to three sides. Eleven 50 metre high concrete towers were built around the stadium perimeter, the four located in each corner used to support a new roof which has distinctive protruding red girders.
Inside the stadium looks mighty impressive, seating at each side is decked out in different colours, blue and green behind the goals with a mix of red and orange at the sides.
The pitch views are first class with each section of seats having TV screens within the stand. 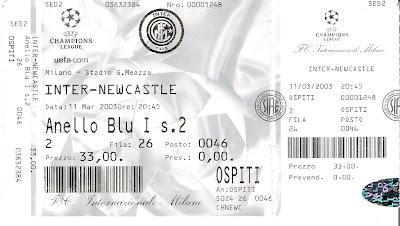 We flew across to Milan from Stansted, departing our homes in the middle of the night to catch our mid-morning flight, which arrived in Italy around lunch time.
Milan is the capital of the region of Lombardy and of the province of Milan, founded under the name of Mediolanum by the Insubres.
The city became successful under the Roman Empire after its capture in 222 BC. It was later ruled by the Visconti and Sforza dynasties, the Spanish and the Austrians.
In 1796 the city was conquered by Napoleon and during the Romantic Period became a major cultural centre, attracting artists, composers and notable literal figures.
Milan is now recognised as a major global city, a centre of fashion and design, with fashion houses in the ‘Montenapo’ and Galleria Vittorio Emanuele, with a rich cultural heritage and vibrant nightlife it became a home from home for the 12,000 travelling Geordies in familiar glamorous surroundings for this big Champions League clash.
A friend of Ian’s booked us into a quite posh hotel in the outskirts of the city. Our definition of ‘posh’ being a hotel where you each get your own dressing gown with matching slippers and the bathroom has a separate bowl to wash your feet in. (That’ll be a bidet…Eddy) The hotel staff made us feel quite welcome and wished us the best of luck as they all favoured the Milanese club which wears the red and black stripes. 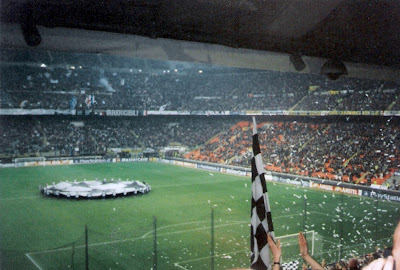 We spent the matchday mainly sight seeing as there was a 24 hour alcoholic ban, just as there had been when we visited Juventus earlier in the season. However we did manage the odd drink in many of the city’s café bars, until we were spotted by fellow thirsty Geordies which each time resulted in the proprietor chucking us all out.
I decided our best chance of getting a pre match bevvy was to catch the metro towards the San Siro, but alight three stops beforehand so we were out of the city centre and not too close to the stadium. The plan worked a treat as we found a bar a short walk from the station, where a few Newcastle supporters were enjoying a peaceful drink on the patio terrace.
It was here where we spotted a familiar face strolling along the sidewalk with a young bird on his arm. “Ricki Lad” “Whey-hey Rick” we shouted at former Yes man and prog-rock keyboardist Rick Wakeman,who stopped for a chat and seemed a genuinely canny lad. 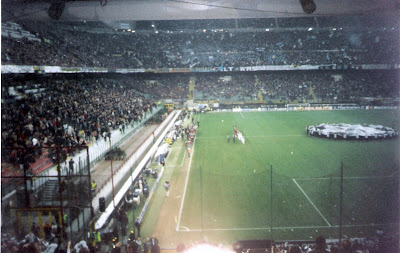 By the time we caught the metro to the stadium, Ian was as drunk as a fiddlers bitch and I lost both him and Lee in the melee during the long walk to the ground. When we met up again at half time I learned he had no match tickets, Ian had either lost them or had his pocket picked.
With Lee in tears outside the ground and kick-off time approaching, in an act of desperation they pushed their way through the gate in amongst the sway of Toon supporters, successfully managing to get through without getting nabbed, so they were both very lucky they didn't suffer a matchless Milan trip. 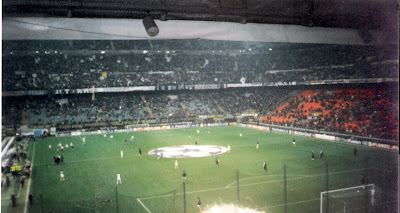 Newcastle United’s second adventure into the worlds top club competition looked a brief one, three straight defeats to Dynamo Kiev, Feyenoord and Juventus left United on the brink of elimination, but miraculously United grabbed second spot winning the reverse fixtures, culminating in an unforgettable night in Rotterdam.
The second phase again saw the Geordies make a poor start. A heavy home defeat to Inter was followed by defeat in the Nou Camp, however a win double over Bayer Leverkusen meant United could still progress as long as we could simply achieve a positive result in Milan.
The pre-match atmosphere was electric, while the travelling Toon Army were in fine voice and in buoyant mood, our Milanese hosts were less than genial. Racial abuse towards United players, stones, coins, bottles of piss and flares thrown into the away section, one of which landed close to my feet. I was lucky I wasn’t burned, but at least I had the consolation of appearing on TV as the camera focused on the incident during the live broadcast.
The local constabulary did nothing about this, apart from put on their helmets in case they got hit by a wayward One Euro coin and observe proceedings as if this was the normal ritual amongst the locals, getting showered with urine or set on fire not too serious an offence. 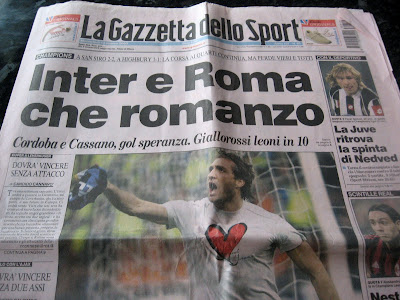 The match itself will live long in the memory, the Magpies pegged back by Inter after talisman Alan Shearer had twice giving United the lead.
The opening goal came just before half time. Solano played in Bellamy on the right, his ball across the face of goal was turned in by Shearer from close range. The interval was one of the most memorable in my time supporting Newcastle. 1-0 up in the San Siro, unbelievable, we just wished it was full time and we didn’t have to play another 45 minutes.
Soon after the restart the cheating, whingeing, racist thug Vieri equalised (can you tell I don’t like him) getting in between O’Brien and Speed to glance in a header from a Conceicao cross.
United regained the lead three minutes later. Tolds failed to keep hold of a Robert cross allowing Shearer to take full advantage, but again United failed to hold on to their slender lead, on the hour mark an Emre free kick from the left was met by Cordoba with a powerful header.
Newcastle pushed for a winner but in true Italian style Inter seemed content on sitting on the point. We walked away from the San Siro after the final whistle disappointed in only getting a draw. Bobby Robson, the players and fans felt we deserved to win, which showed just how far we had progressed in the competition over the season.
The point wasn’t enough, a home win over Barcelona coupled with an unlikely defeat for Inter by Leverkusen in Matchday 6 was required for United to qualify for the knock out stages, and as it turned out both results went by the form book. 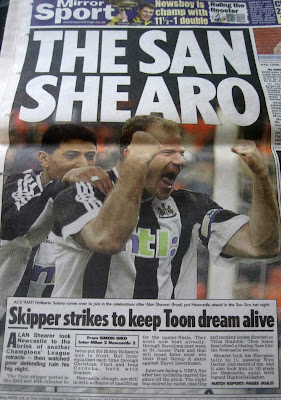 The change in fortunes and difference in scale of both clubs can be summed up as Newcastle are the current Championship winners and Inter the holders of the UEFA Champions League, not quite a million miles apart but still one helluva distance.
The two days in Milan was one of my most enjoyable trips supporting NUFC. This despite of the flare incident, the Patrick’s losing their tickets and having to tolerate a set of grade one partisan fans which makes a Toon trip to the Stadium of Light seem like a day trip to Whitley Bay.
This match and occasion goes into the ‘I was there’ category. I wouldn’t have missed this one for the world and would have happily travelled a million miles just to be there. 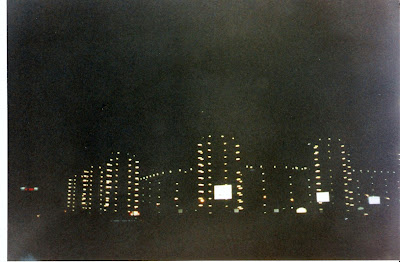 Thank you very much Anonymous...or should I say Windy Melons! ;-)