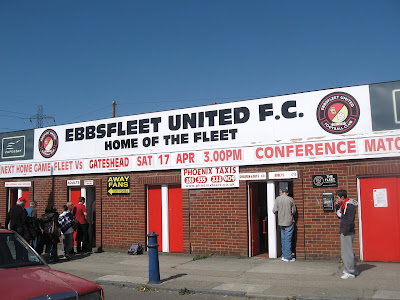 Ebbsfleet United is the re-branded name of Gravesend & Northfleet FC who changed their name on May 1st 2007. Ebbsfleet is a small suburb of Northfleet, the renaming coincides with their sponsorship with Eurostar, whose trains serve Ebbsfleet International station. The area is on the south bank of the Thames in north west Kent and lies within the Thames Gateway

The club was formed in 1946 with the amalgamation of Gravesend United and Northfleet United, both had played in the Kent and Southern Leagues since the clubs were founded in the 1890’s.
The Fleet’s early history was in the Southern League, becoming champions in 1957-58, the club remaining in the league until becoming founder members of the Alliance Premier League in 1979.
G&N stay in the pyramids top league lasted only three seasons, with relegation back to the Southern League which they went on to win for a second time in 1993-94.
In 1997 they joined the Isthmian League which led to a return to the Conference after four seasons, winning the Isthmian Premier League in 2001-02.

Ebbsfleet United is renowned for the take over by the MyFootballClub website in November 2007. The website entered a deal to take over the club, with approximately 27,000 MyFootballClub members each paying £35 for one equal share which provided the funds for a £700,000 takeover. The members each had an input in major decisions including picking the team and votes on transfer targets.
After a successful first season which ended with a first trip to Wembley, with a 1-0 win over Torquay United in the final of the FA Trophy, the majority of MyFC members failed to renew their membership.
The numbers of renewals dropped to just over 9,000 in 2009 with the club previously stated that 15,000 was the minimum requirement, recent figures show that only 800 members have continued to pay membership fees.

Northfleet had played at Stonebridge Road since 1905. The marriage of the two clubs after the War saw Gravesend vacated their ground at Central Avenue and move in with their new partner.
The Main Stand was completed in 1959 replacing terracing which was used to replace the original old stand. The Stand has a single tier of red seats with white supporting pillars with a shallow terrace in front, which is mainly used for photographers and as a disabled supporters section.
There’s open terraces at each side of the Main Stand, the section nearest the Plough End is a popular part of the ground, as it’s close to the bar behind the Plough End stand. The covered terrace was replaced with seats in 2006. The roof of the stand still has vague remains of an advert for Trueman Beers and has THE FLEET painted in big red letters on the back wall.
Opposite the Main Stand is the Stonebridge Road End which had cover added in the early 1950’s and also incorporates a small club shop and TV gantry.
Away supporters use the Swanscombe End which was reconstructed with crash barriers added in 1980.
The record attendance in over 100 years stands at 12,032 for an FA Cup 4th round tie with sunderland in February 1963, the Fleet drawing 1-1, forcing a replay at Roker Park which they eventually lost 5-2. 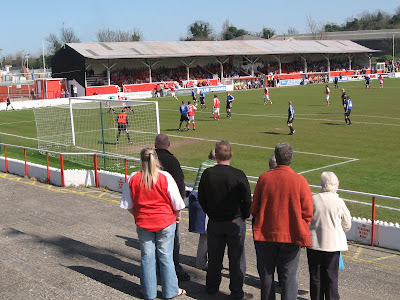 I billed this match as a relegation cup final, but squad #51 John Young came up with a better alternative when I spoke to him prior to kick-off, labelling it “a big 9 pointer”
If Ebbsfleet failed to win they would be relegated, but victory would give them a chance of survival and at the same time put Gateshead deep into the relegation clarts, and this was exactly how it turned out.
The home side took the lead in the first minute, a mix up between Swales and keeper Farman left Vieira with an open goal from a yard out to give the Fleet a dream start.
With this game being a relegation battle and a big six, sorry!, nine pointer chances were limited, but Ashikodi could have doubled the lead in the 13th minute, his close range header flicked onto the crossbar by Farman.
Gateshead battled in the second half for an equaliser but as the game progressed it became increasingly unlikely, as Ebbsfleet relied on catching the Heed on the break. It came as no surprise when that tactic paid off two minutes from time. Vieira played the ball out wide to Shakes, who raced down the right flank before picking out the unmarked Stavrinou for a simple tap into an unguarded net.
This win increases Ebbsfleet’s chances of staying up and like visitors Gateshead the relegation dogfight goes into the final weekend, the fate of both sides still unknown until 5pm next Saturday night. 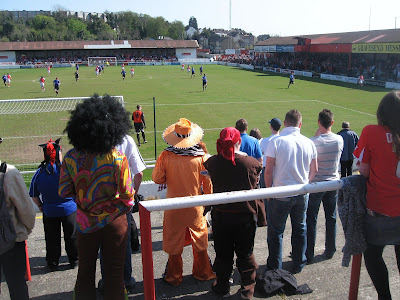 Another Saturday and another long journey, this week a 630 mile round trip from Tyneside to the Garden of England. We departed at 7am, the journey went well, our bus pulled up on Stonebridge Road just after 1pm, with a few of us staying aboard, some dressed in fancy attire requesting a detour across to Gravesend for a drink.
We intended on doing a pub crawl but settled at The Robert Pocock, the Gravesend branch of Wetherspoons which was full of Leeds United fans on route to Gillingham, who we had a friendly chat and sing-song with.
It was here that I met up with Kent based 100FgC #68 Jonathan Elton. It was good to meet up with Jon as I haven’t seen him since we went to the Don Valley Stadium in September 2008. He recently completed ’The 92’ (at Hartlepool 5th April) also another member of the 100FgC who travelled down for today’s game completed the set, Lincoln based squad#86 Jim Morris (at Bristol Rovers 13th April)
The day overall was great, obviously apart from the match, which from a Gateshead fans point of view was, and I’ll choose my words carefully and not swear - an unacceptable performance for such an important game.
Stonebridge Road is a bit of a classic non-league ground. It’s plain to see there hasn’t been any work done in recent years and could do with a bit of a spruce up, but overall I really liked it.
Looking back over this season, my biggest disappointment on a personal level is Gateshead’s away fixtures didn’t fall kindly for me and I missed out on plenty of Conference grounds, but hopefully I’ll get another crack at it next season, but at the moment, it’s looking extremely doubtful.