I took advantage of a family holiday in north Wales, to nip along the coast from our base 6 miles away in Abergele, to visit new Welsh Premier League club Prestatyn Town.
Prestatyn is a seaside resort in Denbighshire, the most easterly point of the North Wales Path and the northern point of the Offa’s Dyke Path, a long distance footpath between the Welsh and English border. The town is also believed to be one of the oldest populated places in north Wales, tools were discovered in a nearby village in the caves of Craig Fawr, which disclosed the existence of cavemen in the area.
Football in the town originates back to the early 1890’s but the present club began in 1930 and became officially formed in 1946. After an initial period in the Dyserth Area League, progression was made, joining the Welsh League(North) in the late 1950’s until the club ran into financial problems in 1971. This meant having to take one step back, before moving forward again, eventually becoming founder members of the Clwyd League in 1974/75, taking the title in their first season and enjoying a successful era winning more honours in league and cup.
The Seasiders progressed up the pyramid, joining the Welsh Alliance in 1993/94, until a fantastic title winning season in 2005/06, unbeaten and scoring 114 goals saw promotion to the Cymru Alliance. A third place finish was followed up by winning the title last season, and so the club find themselves at the top tier of Welsh football for the first time.
Judging by their performance against Tranmere Rovers, the Seasiders shouldn’t have any problems adapting to a higher level, although Rovers fielded a youthful side, you can only beat what’s put front of you, and Town played some great passing football, taking a three goal lead by half time.
The first goal arrived after quarter of an hour, a strong run forward from striker Hoult, who outpaced the defence before getting to the bye-line and cleverly knocking the ball off a defenders leg into the goal. This was followed by a header from Bowes, a simple nod into an empty net after an initial effort hit the bar, and a third just prior to the whistle, full back Davies made room for himself in the penalty area, holding off a defender before toe-poking the ball into the far corner.
Tranmere improved in the second half, with a few worthy efforts at goal, but could only muster up a consolation from Dave Taylor, who took advantage after a collision between the keeper and striker to leave a simple chance to score, the game got more physical as the game wore on, with the odd dodgy tackle, but the Seasiders looked comfortable throughout and were justly winners on the night.
Prestatyn Town have played here since 1969, it’s situated off Bastion Road, in a residential street at the foot of Bastion Gardens, the ground is next to house number 59, who neighbours a small car park and turnstiles. All the amenities are next to the entrance behind the goal, including the clubhouse and changing rooms. The seats are all situated pitch length down the far side, a mixture of dark and light blue flip seats, there’s a few padded seats and a small press box, with the middle third section covered, all the major ground improvements were made in their successful application to join the Welsh Premier League, floodlights, installing more seats, turnstile block and treatment room.
The local residents have a prime spot of watching games from the upstairs back bedroom, I noticed one or two taking advantage of this, although there were objections to the ground upgrading and plans to install floodlights. During the game the ball continued to be booted into the residents gardens, I overheard one of the committee commenting on this, saying “oh no, not that house again” I asked him why and he told me they don’t give the balls back, I had images of some irate bloke warning that if the ball goes into his garden again he’ll put a knife through it. So what‘s their problem?,Why moan at such a trivial thing? Having a football ground in your street, where you can watch the game from the comfort and warm of your own home and it costs nowt! Now that ‘s what I call a dream home, these people don’t know how lucky they are! 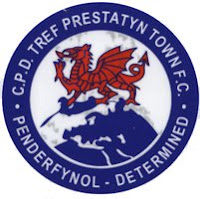 Matchday stats
PTFC 3(OG 16,Bowes 32, Davies 44) TRFC 1(Taylor)
Att. Approx 200
Admission £5
Programme- No issue due to the programme editor being on holiday, but they did dig out an old copy as a souvenir.

Hope you and yours had a nice holiday Shaun!

Anyone wanting to sell a house which overlooks a football ground? You know who to send a message to.

I love the name of this Ground!! Is it Bastion Fortress or Fortress Bastion or is just see you at the Bastion?

Shaun, am looking forward to reading your reports this year just one gripe, my eyes ain't what they used to be any chance of a line break between paragraphs?